An uphill finish but still one for the sprinters, just with a wider cast of contenders. 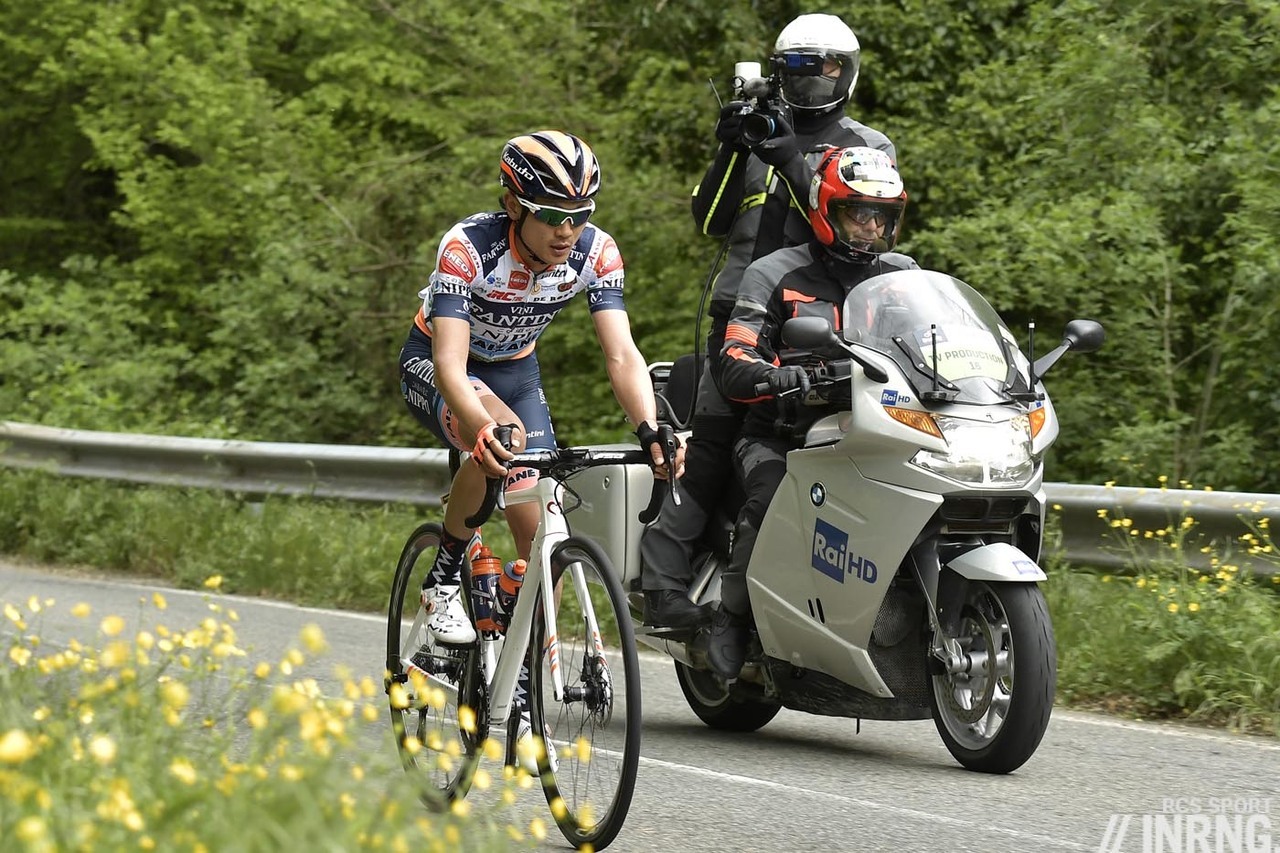 The Sho on the Road: a long day but short on action and a stage enjoyed on the radio by your blogger, the pictures were better. Nippo-Vini Fantini’s Sho Hatsuyama took off up the road and spent half the stage alone by himself, good on him and the former Japanese national champion didn’t correct team mate Nishimura’s Stage 1 exit but did give the Japanese media a good story to write home, and he added this was just him doing his job rather than avenging Nishimura’s departure. Once caught, the finale was windy but the nobody wanted to split the race up although the tension caused some crashes including Tao Geoghegan Hart who lost a bit of time on GC. The sprint saw Elia Viviani finish first but he was later relegated and Fernando Gaviria recovered the win. Harsh? Yes but reviewing host TV RAI’s Processo Della Tappa (literally the “trial of the stage”), the jury of pundits, newly armed with a lot of video replay tools for this year’s race, agreed with the commissaires which isn’t obvious for a home channel and a domestic audience. 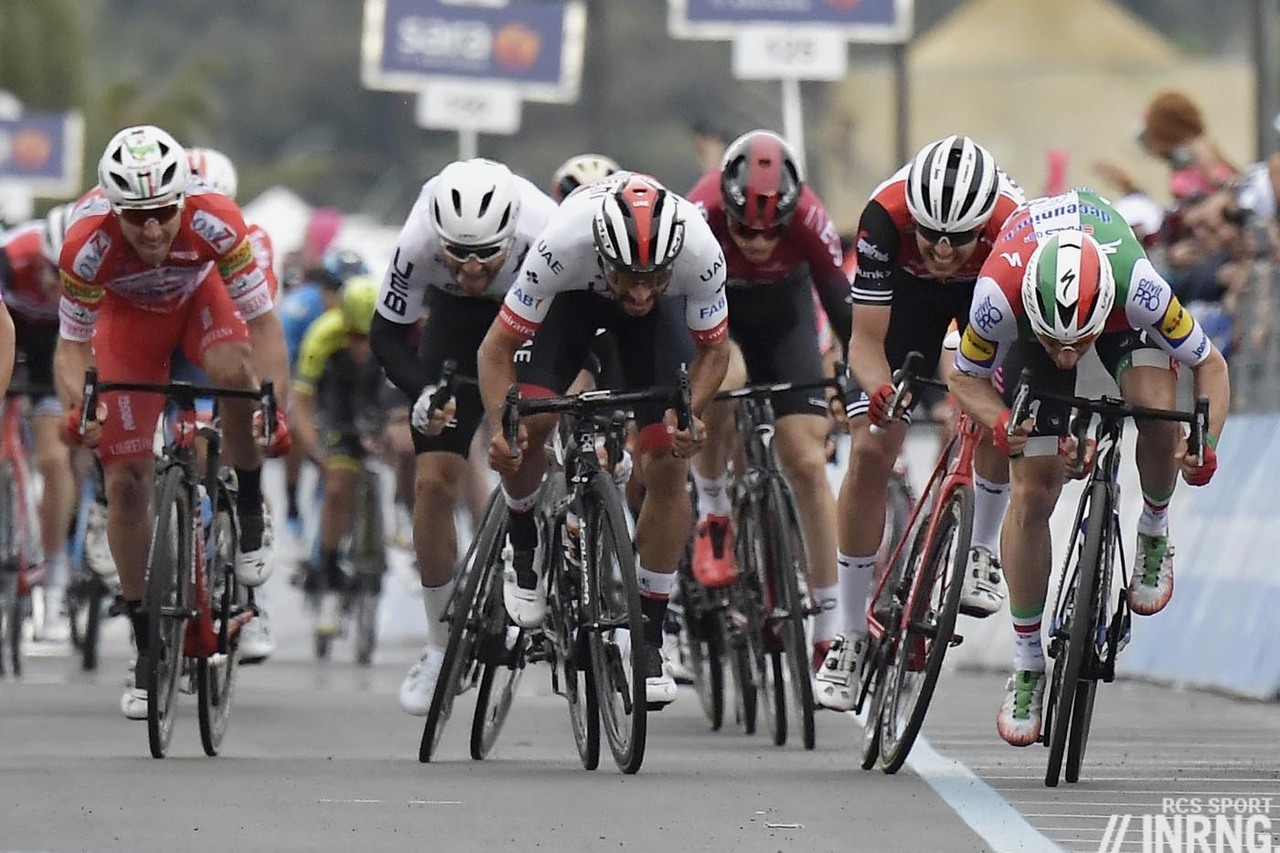 The Route: 235km south and around the capital Rome. 235km, you’ve just read that right and the distance will be felt today and in the coming days too. The second half of the stage switches to smaller roads.

The Finish: uphill at 4% for the final 2km, but all on a big wide avenue that encircles the town. With 2km to go the road goes under a railway bridge and it’s from here onwards that it rises all the way to the line with two brief flat portions before the 1km to go banner. It’s not steep and given the speed of the bunch it pays to be sight tight on the wheels while others do the work. If there’s a lull in the pace a brave attack with some momentum could catch people by surprise but otherwise it’s still a sprint.

The Contenders: Fernando Gaviria is a light sprinter and if he struggles then his UAE Emirates team mate Simone Consonni can take over as he’s even lighter at a little more than 60kg and Diego Ulissi could try but it might not be quite steep enough for him.

Caleb Ewan (Lotto-Soudal) is another relatively light rider and has won uphill sprints in the past including a stage of the Vuelta and also the present in Turkey so maybe he might find this finish better than the flat ones. Arnaud Démare (Groupama-FDJ) is a bigger rider but versatile too.

Otherwise there are uphill sprinters, a niche normally hogged by Peter Sagan but on the Giro we have Enrico Battaglin (Katusha-Alpecin) but he was involved in a crash yesterday and might be smarting. Andrea Vendrame (Androni-Sidermec) is another and so is Juan-José Lobato (Nippo-Vini Fantini) but it’s a huge ask for the Pro Conti invitees to beat the field although Lobato has done this in the past and recently finished second to Ewan in an uphill finish in the Tour of Turkey. Tony Gallopin (Ag2r La Mondiale) has gone for these finishes before but seems less explosive these days. Grega Bole (Bahrain-Merida) is on a World Tour team but before he used to win these kind of races. Jay McCarthy can win these kind of sprints too but has a low win rate.

Weather: grey, damp and a top temperature of 14°C, it might be mid May but this is equivalent to a winter’s day for the Lazio region of Italy.

TV: the finish is forecast for 5.15pm CEST / Euro time and don’t tune to early for this unless you’ve  checked the ticker or social media and somehow things have gone feral. It’s on RAI in Italy, Eurosport across most of Europe and Australia, L’Equipe TV in France and Flobikes and Fubo.tv in the US.