We’re now approaching the halfway point of the season as measured by racing days with close to 300 days of racing done of the 606 on the calendar.

The last time the chart appeared Etixx-Quickstep were leading ahead of Team Sky and Movistar. Now they lead thanks to Mark Cavendish winning four stages in the Tour of California and another from Julian Alaphilippe but Katusha come charging up to second place thanks to Alexander Kristoff and his 16 wins, five of which came from Norway’s Tour des Fjords and the Tour of Norway. Ilnur Zakarin took the Giro stage to Imola while Marco Haller won the overall at the Tour des Fjords. Meanwhile Team Sky failed in their bid to win the Giro but left with two stage wins thanks to Elia Viviani and Vasil Kiryienka. Beñat Intxausti won a stage of the Giro and Alex Dowsett took the time trial stage of the Bayern Rundfahrt and the race overall too, a very valuable win for the team given their German bike sponsor. 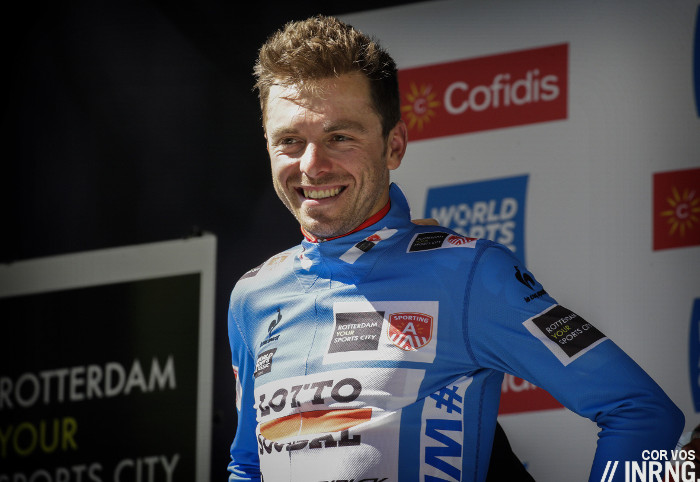 Lotto-Soudal are the surprise package. There’s been talk of divorce between Jurgen Van den Broeck and team management after the rangy Belgian suffered in the Giro but elsewhere it’s been win after win. André Greipel had his Giro stage win overshadowed by Alberto Contador’s crash but the team’s best rider by wins is Kris Boeckmans with eight this season and he sits fourth on the list of pros with the most wins behind Kristoff, Cavendish and Porte. That’s him pictured above as he’s not a recognisable rider yet.

Tinkoff-Saxo have had a great month of May. Alberto Contador won the Giro of course but they’ve added to the count with Peter Sagan’s Tour of California win with two stages along the way and Jesper Hansen winning the Tour of Norway with one stage too. FDJ’s Arnaud Démare has started winning again and this helps their score. Lotto-Jumbo are still on that one win from Moreno Hofland’s sprint in the Tour de Yorkshire. Talk of unblocking the counter has been just that, talk. But as ever wins matter a lot but how you go about them is another and Sep Vanmarke’s visible efforts in the spring classics and Steven Kruijwijk’s heroics in the Giro count for a lot, the Jumbo supermarkets could have posters of Kruijwijk with the slogan “fresh every day” as a marketing campaign. But it’s safe to assume the team would trade one of Kruijswijk’s breakaway efforts in the Giro for a stage win or the mountains jersey where Giovanni Visconti proved a star pupil in high altitude arithmetic.

CCC-Sprandi Polkowice were almost invisible in the Giro despite their orange kit but top the Pro Conti rankings thanks to three recent wins in their home Bałtyk-Karkonosze Tour. Rusvelo are the home specialists with eight wins in Russia and only one outside. MTN-Qhubeka are still struggling, they’re sprinter heavy but have few wins although Edvald Boasson Hagen looks to be coming back into form. Europcar are still searching for that replacement sponsor and that first World Tour win this year.

Cofidis probably have the best budget in the second division but they’re still struggling. Nacer Bouhanni keeps running close but not winning. See his three second places in the Bayern Rundfahrt, it would be encouraging given he’s still just 24 but he’s on a contract worth over a million euros and the team has been built around him so it’s all proving stressful. Sam Bennett is Bora-Argon 18’s winning machine with three of their four wins including two stages of the home race in Bavaria but their best win or at least the surprise was the team time trial in the Giro del Trentino where they beat Team Sky and Astana.

Wildcard woes: the Tour de France is one month away. Bora-Argon 18, Bretagne-Séché Environnement, Cofidis, MTN-Qhubeka and Europcar are the five wildcard teams. At the present rate if they’re struggling to pick off small wins here and there then delivering stage wins in the Tour is a big ask: Bouhanni and Coquard are getting better in the sprints but they’ve got to trounce Cavendish and Kristoff; Boasson Hagen was great on those punchy uphill finishes but he’s got Peter Sagan, John Degenkolb and others to worry about.