The city of Avignon is famous. Once the home of the Papacy many also know it for the song about dancing on the bridge. It’s also where many of pro cycling’s top teams gathered last summer to find new ways to reshape the sport. But just as the famous bridge is broken it looks hard for the pro teams to build bridges.

It’s worth revisiting the subject because the Avignon scoop by Stephen Farrand hasn’t got much attention or headlines elsewhere; such is the way of cycling media that when one outlet gets a scoop the others won’t report it – cyclingnews.com didn’t relay Velonew’s Horner to Lampre scoop – but they’ll all report a story from outside, for example an interview in La Gazzetta Dello Sport. As an imprecise metric The Avignon story attracted 16 comments on cyclingnews.com, one less than a randomly picked article from the site today where Alejandro Valverde asserts a truism to Marca.

But this matters. It’s about big teams collaborating and even conspiring to change the sport with a concept more profound than the World Tour. Last month I did a series of items that can all be threaded together.

The synthesis of the three pieces is that the current model of pro cycling isn’t easily understood and even the simple things like a World Tour website don’t exist so doing anything complicated is a big ask. By all means attempt it but nobody’s got the basics in place yet.

Non !
Having seen the talk of revenue sharing and even Oleg Tinkov’s provocative talk of boycotting the Tour de France, race organisers ASO blasted back. Here’s a quote in L’Equipe (owned by ASO):

“The historic rights of organisers aren’t a subject up for discussion. This has been the starting point for all harmonious cooperation between the mixed working group which works hard to bring solutions and extra value for cycling. These historic rights have been recognised by all stakeholders and reconsidering isn’t in the spirit of the working group”

That’s a translation and the textual equivalent of pulling up the drawbridge. The “mixed working group” means the teams, races, UCI and riders who are currently locked in discussion over the points qualification criteria for the 2015 World Tour and by historic rights, assume it means owning the broadcast rights and the ability to sell them. There’s also the matter of the UCI and its World Tour rules, any boycott of the Tour would put the Tinkoff team’s licence in jeopardy. But second order consequences are not on Tinkov’s radar, he’s just being provocative and as such he wins as he’s got the debate going.

But what of another Russian? Igor Makarov is a more discreet figure but arguably far more powerful and certainly richer. Makarov’s Katusha are not part of the Avignon Accord. We can only speculate why but note Makarov sits on the UCI’s Management Committee and is close to Brian Cookson. In other words he’s part of the system rather than an outsider. 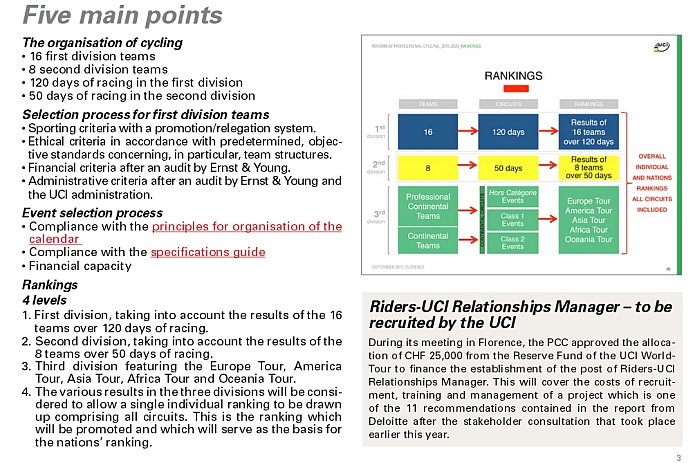 UCI 2020
All this is with the backdrop of the UCI’s 2020 plan for calendar reform and associated changes. But Avignon is about more, it’s about finding a new commercial structure for the sport. Don’t confuse the two.

Meanwhile for 2015?
All these plans relate to some unknown point in the future but there’s a more immediate matter of the sporting criteria for the 2015 season. This means the relegation and promotion criteria for the next season. How many other sports start the season without publishing the relegation criteria? It’s odd and no wonder some teams are trying breakaway moves to encourage more stability.

In the dark
Nobody knows what’s going on. The UCI is aware of the teams acting in concert but seems to be a spectator rather than an actor. Fans have little to go on. Crucially the riders have little idea either, there’s no rider union to protect their interests. FDJ’s Jeremy Roy wrote about the uncertainty and added Philippe Gilbert tried to present some ideas but felt he wasn’t listened to.

Summary
The Avignon story seems to have gone unnoticed but it’s a clear attempt by most of the big teams to reshape the sport. What shape this takes remains to be seen. It’s impossible to come out in support of reform or not because nobody knows what it might look like; you might like novelty or you may be conservative but nobody knows what’s coming. Indeed this might be the pro cycling version of Waiting for Godot as discussions, leaks and more emerges… only for nothing to happen.

ASO’s rejection isn’t fatal for the Avignon project but the firm non suggests they’re not interested in discussions, yet alone reform but things can change if revenue sharing is off-limits. In the meantime the racing is back and with it the points system but there’s still no published system for promotion and relegation in place.