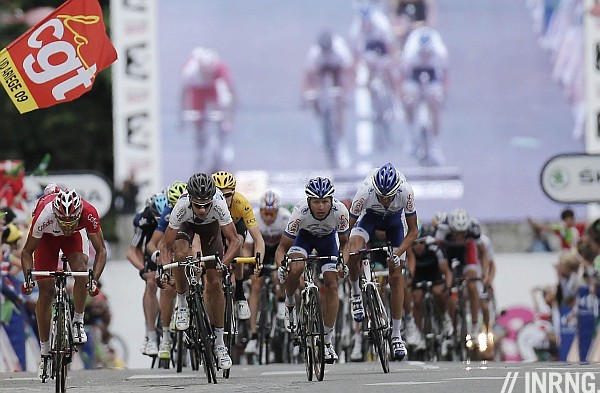 Ok, the headline exaggerates wildly but that’s half the point of the story below. TV audiences in France fell for the Tour de France, in part because there was no big battle for the yellow jersey throughout the race. Meanwhile Bradley Wiggins’ Tour triumph is claimed to have boosted bike sales in the UK. Are both stories true?

First TV audiences for the Tour de France in France averaged 3.4 million per day, down from 4.3 million last year – a 20% fall – according to L’Equipe newspaper. The relative measure of audience share fell too, from 40% to 34.6%. However an absolute record was reached this year with all time high of 5.4 million viewers for Stage 14 from Limoux to Foix, the day the stage saw tacks dropped on the road. After ramming Johnny Hoogerland off the road last year, perhaps TV executives tried other methods to liven up the race this year?

Just joking. The audience figures were down but we need to remember that last year was an exceptional year for the Tour de France. The yellow jersey was worn by a Frenchman for a long time and every day the predictions that Voeckler would lose his maillot jaune were proved wrong until he forfeited it on the last mountain stage and even then the race result was not decided until the final time trial when Evans grabbed the lead from Andy Schleck. In other words, if this year’s numbers are down then it’s more a return to normal figures, no doubt many were bored by the lack of fight for the yellow jersey but the numbers were similar to previous years. In other words, Wiggins didn’t really French sink TV, the story is more nuanced.

Now to Britain where reports Bradley Wiggins’ Tour triumph has given bike sales a boost, with payments company Visa reporting an uptick in sales of 5.1% compared to the same period last year. Impressive as the UK economy wallows in economic gloom. Are Wiggins and Cavendish inspiring the nation into cycling and consumerism? Well the answer is perhaps but beware of headlines. Because as people pointed out to me on Twitter, the weather has been bad in Britain – isn’t it always bad? – and so the damp weather has had a big effect. The same for other factors like the oil price and more. It’s about the narrative, we can attribute many things if it sounds right. Us humans like our stories simple and a payments company wanting some free publicity won’t get it if it says “a wide range of factors, perhaps some unknown, have caused an increase in sales” then there’s not much to write about.

Conclusion
Beware of headlines. TV audiences might shrink in France but they’re a return to the norm and the Tour is as popular as ever. Meanwhile if the cycle industry sees a pick-up in the UK then British success has surely inspired some but it’s also a function of other factors, especially the weather, crucial for an outdoor activity in a temperate climate.

But short attention spans matter. A consistent theme on here is how the sport is adapting to television. When I wrote about the Tour being boring during the first week, I was still enjoying the race but worried that more casual viewers with a finger on the remote control were ready to stop watching. As for cycling in the UK, it’s about time it picked up. Along with Germany it is one of Europe’s largest consumer markets but the country lacks many big races. The more the sport can grow in the UK and Germany, the more the sport will grow in Europe and beyond as sponsors know they can take their brands to prosperous households on a pan-European basis instead of a selection of Euro nations.

Previous post: Voeckler: the Showman… and his Secret Nickname