Amidst the recent chatty and rambling letter sent by UCI President Pat McQuaid to riders was a reference to the influence of television:

I was convened to a meeting with the biggest producer of television images of cycling, France Television, and was told by senior executives clearly that if radios were retained in cycling and used as they were being used that the coverage of cycling on television would be reduced.

It’s no secret that TV is crucial to the sport. Hours of airtime are what bring in sponsors and in turn the spectacle presented to TV viewers has to be worthy of their attention. Absolute viewing figures are crucial, ie how many millions tune in, but also “share of the audience” metrics, ie of those watching TV at any one time, how many are watching the bike race. Riders might complain about lengthy transfers in some races, especially the Giro, but the mouthwatering stages only exist because the race convoy skips the duller parts of the Italian topograhpy. In short, TV is king.

Yet as powerful as television may be, it’s rare to see a direct influence. The idea of TV executives effecting rule changes on the UCI seems to be a first. But I can’t help wondering if the TV executives are asking for the impossible. As we’ve seen this year, the use or not of radios simply doesn’t correlate with the excitement of a race.

Yes, teams shutting down a breakaway for the advantage of their sprinter can make for dull TV. But to blame the radios for this… well I hope nobody does. No, what needs to be done is to have some more exciting stage finishes. It’s here that the geography of France gets in the way. France might be full of history, charming villages and fine food but large parts of the country are quite flat. You have hours of airtime where there’s nothing to see. 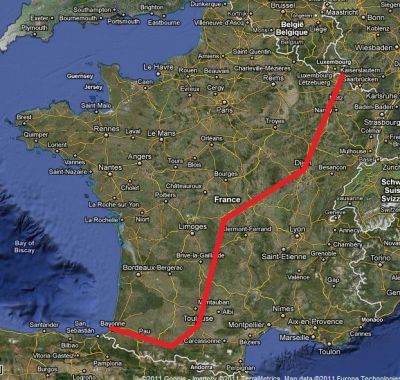 Big ring territory to the west of the line

Roughly speaking anywhere to the west of the red line is flat. Now this is an obvious exaggeration, hold back from the comments section for now. It’s just that I could draw a 150-200km stage any where to the east of the red line that should favour breakaways. Yet the Tour de France can’t stick to Alps, Pyrenees and Massif Central alone. The bunch can easily chase down breakaways on long flat roads, it’s not because of radios.

In other words, surely the excitement factor is something beyond the UCI’s reach, short of banning sprint stages? Even Tour de France organisers ASO will struggle because the race has to tour the country, even if it relies on the Alps and Pyrenees.

The central part of France might include some good climbs but it’s unpopulated and local towns can’t justify the price for a Tour finish. The obvious answer is to readjust ASO’s tariffs, or if not, for French TV to start subsidising towns who promise a tasty finish. That way a small town on top of a hill can host a stage whilst the TV viewer gets an exciting uphill battle to the finish line. Perhaps also to put the stages on later, maybe limited to 150km but with the finish timed for a primetime slot at 7pm? The advertising revenue would be significantly higher.

Not Roubaix or Flanders but Britanny: the Tro Bro Leon

Another opportunity would be to take in new roads. If the area to the west of my red line above is flat, it’s full of farmland and forest. It would not be hard to include some offroad sections, to copy the Giro’s use of strade bianche. This is already done in the Tro Bro Léon race in Britanny.

I’d also like to see the race tackle new climbs. Every year we see the same mountain passes and you’d think this is all France has. But the Alps and Pyrenees have many more roads. Some are more narrow but you can get cars up them no problem. A double digit gradient means the race blows apart.

Bike race vs. circus show
Yet there’s a circus element to some of this. Riders can’t be made to “perform” every day on narrow roads, farm tracks and roads so steep some vehicles struggle. A late stage finish means going to bed even later. Plus there’s an aspect of inflation. In times past the public would wow at riders doing 200km in a day, now TV demands more. Add more climbs or muddy tracks and surely in a decade people will take this for granted? Riders already feel put upon, there is probably no harder sporting even than the Tour already, making it tougher verges on insanity but the flipside is to reduce the stage length, you don’t need anything longer than 200km in the final week.

Production
TV can also achieve more itself. French TV production is a decade behind other countries when it comes to sports coverage, whether technically or analytically. I’d like to see some better filming and use of technology. On-bike cameras don’t work too well but live GPS graphics could show the actual gaps better; when riders tackle a climb an caption could show the gradient and the distance to the top of the climb. The finish line cam on the Champs Elysees is great. Why not install this at every finish or mount a camera on wires to film the aerial view of the final 500m of a bunch sprint?

Le Dopage
One reason for drops in audience numbers is the persistent theme of doping. Many don’t tune in because they don’t believe what they’re seeing. What’s the point in watching a stage for five hours if the result is overturned by a lab or an arbitration panel? Everyone is aware of this but I’m still not convinced people are working hard enough. The UCI seems inconsistent at times. The TV stations need to do their bit too, maybe to get a camera crew “embedded” in a team so they can show what the riders go through. Indeed, letting a few have an “access all areas” pass would go some way to showing the human side of the race. Showing what they guys eat for breakfast to how they spend the evenings would dismiss the “lab rat” perception held by some.

Aux manivelles, citoyens
The biggest boost France Télévisions could hope for is a winning Frenchman. A rider who is in with a serious shout of the overall win would have the French glued to their TV sets and the state broadcaster would be asking how they could repeat the race, not how they could re-jig things.

Summary
It’s interesting to think the current dispute over race radios has its genesis in the Parisian offices of the French state TV company. As a result race in Beijing could get canned by a boycott. This is chaos theory in action and largely because the UCI has not properly consulted and communicated. There’s still been no evidence presented to suggest radios makes racing any worse.

For my part French TV and ASO could work together to make the race better viewing, there are plenty of avenues to explore and some of this is being done already. The UCI is neither here nor there. Indeed, it would better to restrict the UCI to its core role of enforcing existing rules rather than making fresh changes. Stopping the turf wars with the French anti-doping agency would be good and a more consistent approach to anti-doping would be better. The UCI needs to focus on its core job and let ASO focus on staging the show.

For all the talk about making racing more exciting, radios appear here nor there. But vast amounts of political capital and goodwill are being used up over this debate, wedges are being driven between various groups within the sport and yet it will probably go unnoticed by the casual French TV viewer who turns on the TV on during Sunday lunchtime. All this debate and nobody outside the sport will notice anyway.