It was acceptable in the 80s – Part III

The third part in the series of cycling in the 1980s, I’m going to nominate five French champions. With the exception of Laurent Jalabert, the French have never had a world class rider since this period. 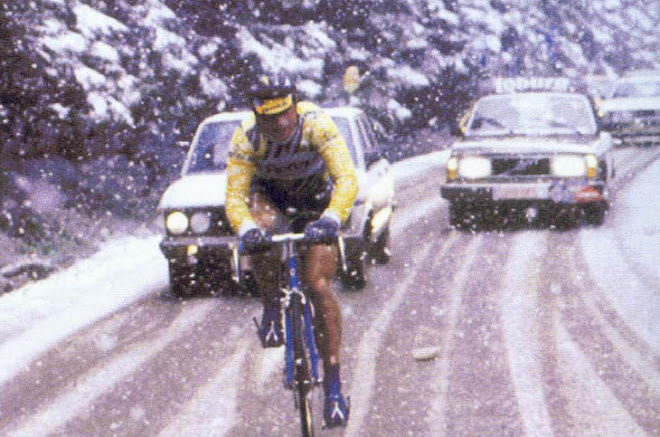 The five time tour winner remains in the sport as ASO’s podium man but forget his functional handshakes, he was better know for smashing people with his fists: when striking shipworkers tried to block a race, Hinault started punching shocked protesters in the face. His nickname was Le Blaireau, or the badger, but this was no cute woodland animal, when cornered Hinault would fight like an animal.

Like Armstrong he seemed to ride not just to win but to teach others a lesson, as if coming second was a personal humiliation. He was certainly a hardman, he apparently lost the feeling in two fingers are riding to a solo win in Liège-Bastogne-Liège doiminated by a snowstorm. Arguably he was the last rider to dominate one day races and Grand Tours alike.

Despite his determination and even acts of violence, he wasn’t all agression. Off the bike he impressed many with a calm attitude and ready jokes at press conferences. He left the sport early to take up dairy farming, saying it was better to retire with his champion status intact rather than be witness to a decline.

2. Laurent Fignon
A double winner of the Tour de France in 1982 and 1983, he had a quieter spell in the middle of the decade (but this includes winning Milan – San Remo) before a sublime 1989. He won Milan-San Remo again and took the Giro d’Italia in June. Then came July and the yellow jersey danced back and forth from Greg LeMond to Fignon as the race went through the Pyrenees and the Alps. Then came the final time trial. Fignon, in yellow by 50 seconds, was crippled by a big saddle abscess and rode the time trial of his life, averaging 52km/h from Versailles to the Champs Elysées. Only LeMond went even faster and took the overall by just 8 seconds.

For me these 8 seconds encapsulate up the entire decade: LeMond was the non-European in an era when the sport began to expand beyond Europe, he had new technology in tri-bars and was the first to bring in new fashions like Oakley eyewear.

3. Charly Mottet
The diminutive racer was a strong all round rider with one speciality: the attack. Often on the front of many races during this decade he racked up 67 wins as a pro, including the Dauphiné Libéré twice as well as several big classics. Today he is the race director of the Dauphiné.

4. Jeannie Longo
Longo won the French women’s road race title in 1980, 81… and every single year until 1989. This was the beginning of her domination of women’s cycling, not just on the road but on the track too. The list of her wins is enormous and she’s still active, with a fourth place in the Olympic road race in Beijing.

A successful rider – a sprinter with seven Tour de France stages to his name – Guimard went even better when he swapped his handlebars for the steering wheel of a team car. An innovator, he was the first Directeur Sportif to equip his Renault team with disc wheels and low profile frames en masse. He had a final tactical mind although riders complained he was not good at personal support: a strategist rather than a father-figure. But several riders remarked that he could tell how a rider was from his pedal stroke. He also had an eye for talent, Guimard was the only DS to approach Laurent Fignon when other teams ignored him and he also signed the likes of LeMond and was instrumental in guiding Hinault towards success.