It Was Acceptable in The 80’s – Part VIII

As part of the series on the 1980s, here are five items related to bike brands during this decade. So press play and travel back in time once again.

The 1980s were a crucial time for frame design. Whereas the choice at the time was usually about the type of steel tubing, colour and your preferences over the seat tube angle, within 10 years there was a growing choice of frame materials and design.

Any colour your like, so long as it’s chrome

There was Colnago and there was everyone else. The family business from Cambiago was perhaps the undisputed leader in frame manufacturing. The company had an aura about it. Whereas as almost every other frame relied on steel tubing from Reynolds or Columbus, Colnago had a special arrangement with Columbus and used special “star” shaped tubing on some of its frames. The performance gains were derisory, instead this was about taking a frame from welded tubes and into art. Colnago backed this up with molto chrome and towards the end of the decade, some fancy paintwork. Pinarello and De Rosa were names that conjured artisanal magic but they always seemed a level below Colnago. 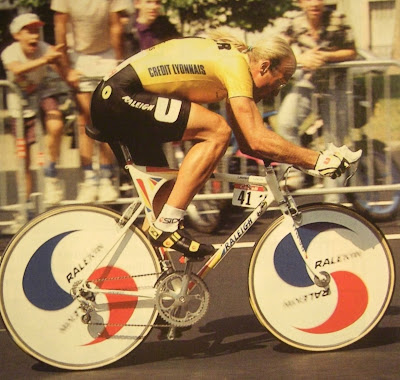 In contrast to an artisan like Colnago, Raleigh was a mass manufacturer that churned out shoppers, kids bikes and other humdrum bikes from its factory in Nottingham, England. But like many other brands, it produced some higher end bikes and these were ridden by some of the best riders of the decade. The manufacturer was behind the TI-Raleigh team, the powerful Dutch squad and at the end of the decade the Super-U team of Laurent Fignon were riding Raleighs. Or at least bikes with Raleigh decals.

3. Peugeot
Part of the same company as the car manufacturer, Peugeot was a throwback to the day when many companies started off making bikes and only later moved into motorbikes and cars. To this day the word for bicycle in Polish is Rover. But whilst becoming more famous as a car brand, it stayed in the cycling world and produced frames for several French squads during the decade.

4. Vitus
Vitus was a French manufacturer of alloy frames. It used bonded lugs, ie it glued the frame tubes into lugs. The frames were light and the shiny alu lugs gave them a futuristic look. But they flexed a lot and whilst Sean Kelly was a big fan, word has it that he had to change frames every month or two as habitual use saw the frames get softer. Whilst not the first to use alu, Vitus was in a way ahead of its time as it was in the 1990s that aluminium took off as a frame material. Click here for pictures.

Like Vitus, TVT was not the first in its field. TVT was a company specialising in fibreglass composites that went into carbon frame manufacture alongside Look. Whilst everyone takes carbon frames for granted today, TVT was miles ahead in the 1980s with its models. Others had used carbon composites before but TVT began larger production and managed to make durable and lightweight frames.

Any colour you like
One afterthought: you could have a genuine choice of paint. As much as you’d pit Reynolds 753 tubing against Columbus SLX, you’d also agonise over the colour.

Today, unless you opt for a custom manufacturer, many of today’s frames come in one colour only. In the past though a well-stocked shop would have rows of identical frames but in all different colours. At the beginning of the decade primary colours ruled, as did chrome, especially on the forks and seatstays. By the end, fluo colours appeared.