A tale of two audiences
You’re probably male and aged between 25 and 45. No, this blog doesn’t have some high-tech way to monitor readership, it’s more that men in this age group are the biggest followers of cycling in the US, UK and Australia and other English speaking countries.

But this isn’t the case in many European countries, especially when it comes to television audiences. Do you know who the biggest watchers of bike races are in France, Spain, Belgium, Italy and Switzerland? The over-60s. And the second largest component of the audience? Women aged 35-55. Yes, the sport you love is mostly watched by pensioners and housewives. 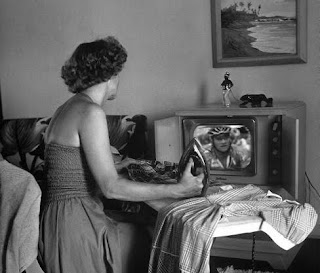 How so? Well it’s obvious when you think about it: there’s a massive amount of racing on week days. The Giro, Tour and Vuelta offer 45 days in total of mid-week viewing and that’s before you add on coverage of all the other weekday races, like stages in Tirreno-Adriatico, the Vuelta a Murcia, the Tour de Suisse and many more, not to mention one day events that don’t happen on a weekend. In short, the majority of racing and TV coverage is shown between 3.00 pm and 5.00 pm, a time when most Europeans are at work, leaving a small audience of people at home. Market research reveals many are tuning in to watch the countryside roll past rather than watch the racing.

But this all changes at the weekend when the audience composition changes significantly, more men tune in for the weekend classics or the Tour stages. These weekend audience peaks also drive the races. It’s no surprise that mountain stages of the Tour de France are timed to coincide with the weekend, this summer’s race hits the Alps on a Saturday and Sunday. In France alone the coverage of the race attracts record audiences to the TV channel that broadcasts it, some of France 2’s highest annual viewing figures are reached during a Tour stage.

TV audiences are crucial to bike races. We may have images of crowded mountain passes from the Tour and Giro but most bike races don’t attract that many roadside spectators, most people watch… at home. For a race to attract big teams it has to promise TV coverage. But for a small race the production costs average €80,000 day, there are helicopters, satellite bandwith and several camera crews to pay for. Many a race organiser pays the broadcaster to cover their event, it’s only the biggest races that allow an organiser to sell the rights.

But the arrival of many fans outside Europe has brought a newer audience that is younger and wealthier. This explains why we are seeing more technology companies like Garmin, HTC, RadioShack and even Sky. The target audience back in the US and UK is a much more valuable sgement. For even if it is much smaller than all the housewives of Europe, its spending power is significant and it’s a key target market for advertisers.

This gives a glimpse into the split of the audience, literally an “old Europe” and a new, anglo-saxon audience.

This blog post covers several topics, from sponsorship to broadcasting and I’ll probably return to these matters in more detail over time.

Next post: It was acceptable in the 80s – Part III