It Was Acceptable in the 80’s – Part VII

As part of the series on the 1980s, here are five items related to technology during this decade. 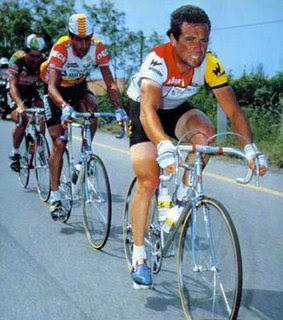 An OEM ski binding company, French company Look realised that the mechanism used to fix a skier’s boot onto a ski could be copied to hold a cyclist’s shoe onto a pedal. Until clipless pedals, riders were using small cleats which slotted onto a pedal to stop the foot twisting and then a toe strap held the foot in place to blog vertical movement. The traditional system saw a rider strapped into the pedals, dangerous in the event of a crash.

By late 1983 Look launched the pedals and changed cycling. But a spate of knee injuries occurred as the new retention mechanism allowed almost no movement of the foot, a problem in time solved. Other manufacturers soon copied things, such as French rival Time. By the end of the decade almost the whole bunch had moved to clipless with only a few riders, like Sean Kelly, preferring the traditional methods. Although the move to the new system was as much inspired by commercial pressures, if riders are told and paid to change, they will. 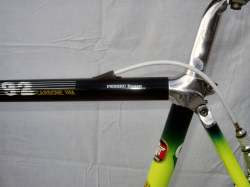 The default material for today’s racing frames saw its birth in the 1980s. Early composite frames had existed but it was in the 1980s that the first carbon frames began to appear in the pro peloton. Once again Look was involved here, collaborating with a small company TVT, that had previously specialised in fibreglass. In 1986 Greg LeMond was riding a carbon frame and by 1989, TVT went into competition with Look. Look won the battle and supplied the Toshiba team.

3. Clinchers
Everyone rode tubulars but thanks to progress from Michelin, clincher tyres began to appear in the bunch. Tubs are tyres that contain an inner tube sewn inside, which are then glued onto the rim. Clinchers are a tyre that hooks onto the rim with a bead and you put a seperate inner tube inside. Until then clinchers belonged on cheaper bikes, from shoppers to entry-level racing bikes. But tubs were always on a race bike but by 1989 the Super-U team was sponsored by Michelin and riding clinchers. Now they would often ride Wolber tubs rebadged as Michelin clinchers but they did test some clinchers in racing and this gave rise to the first high performance clincher, the Michelin Supercomp HD.

In case you ever wondered, the name clincher comes from the Clincher company, a now defunct tyre manufacturer that used to rival the likes of Michelin, Dunlop and Clément.

It was in 1979 that the concept of the low profile bike entered the pro peloton but this took off in the 1980s. Cyclists had long known aerodynamics were key but they relied on making themselves small, for example adopting a tight tuck on the drops and wearing special silk jerseys for time trials. But this all changed in the 1980s, low profile frames were adopted with their cow-horn bars and disc wheels, even water bottles were made aero.

Francesco Moser took this to new levels with his special time trial bikes, his rival for the 1984 Giro d’Italia Laurent Fignon said the Italian’s bike gave a big psychological advantage, even before a pedal was turned the Frenchman felt inferior. By the end of the decade the tri-bars made their appearance, famously giving Greg LeMond those precious eight seconds.

5. Heart rate monitors
Sports science took off in the 1980s. Until this decade most training was rooted in empiricism: a team manager, an ex-rider, would proclaim “I’ve done this before and it worked for me, so you do it” and that was it, the training plan was set. But by the end of the decade several riders were training and racing with heart rate monitors, setting the way for the explosion in sports science knowledge for the 1990s.