It was acceptable in the 80s – Part I

I’m going to run a recurring series of things that marked cycling in the 1980s. Here’s five things to mark this decade of transition where the classic form of the sport slowly moved into the modern era of technology, fashion and science.

Once reserved for tennis players, these became a fashion breakout in the 1980s, sported by fitness-crazed housewives and stadium-filling rock guitarists alike. For cycling the practical effects of keeping sweat out of your eyes were matched by the ability to display a sponsors logo.

For those of you unaware, you used to change gears on the bike with shift levers on the downtube. Obviously seperate from the brake levers, it meant more travel for your hand and when racing it was obvious that you were changing gear, especially when a rider wanted to dump the chain onto the 12 sprocket. The shifting was good thanks to index shifting, where a click on the lever marked each gear. This technology lives on with the bar end shifters used on time trial bikes. 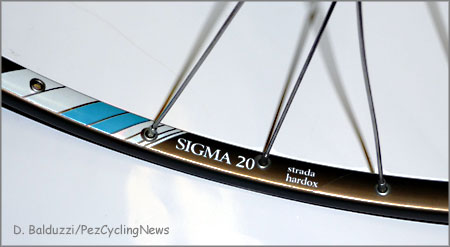 Today’s rider is bewildered by a choice of wheelsets but go back 25 years and there was only a choice of hubs and spokes because if you wanted the best rim, it was the Campagnolo Sigma Pavé: the sine qua non of a good pair of wheels. It was light, strong and had a snazzy anodised finish that other rims lacked.

4. Colourful cycling shoes
Until the late 1980s the Henry Ford dictum applied to cycling shoes: any colour you like as long as its black. This owed itself to the materials in use, cycling shoes were often leather and a rider needed a winter to “break in” the soles. So a pair of white leather shoes might look natty in the box but they’d be ruined after a few rides, you could not clean them as well as today’s shoes. The breakthrough came with the change in materials. Synthetic leather and other plastics allowed more colourful shoes starting with blue models from Gaerne and the iconic white and red shoes from Time.

5. Steroids
Acceptable in the 1980s? Well riders were getting caught for steroid abuse but at the start of the 1980s a rider could get their ban suspended, meaning if they were busted mid-season then they could conveniently serve the two month ban during the winter. Even if you were caught during a stage race you could carry on. By 1988 the Tour de France win by Spanish rider Pedro Delgado was marred after the Spaniard tested positive for a steroid called Probenicid. But if the drug was on the banned IOC list, the UCI had yet to add the molecule to its own banned list. So Delgado won with steroids in his veins but he couldn’t be banned. Acceptable in the 1980s?

Previous post: No grazie, the podium is camp enough