The weekly look at the UCI promotion and relegation standings. With Alpecin-Fenix and Arkéa-Samsic high on the tables and all but assured promotion, the story is all about which teams face the drop. It’s becoming very tight because relegation candidates Lotto-Soudal are closing in on EF Education and BikeExchange.

Two points to note this week… 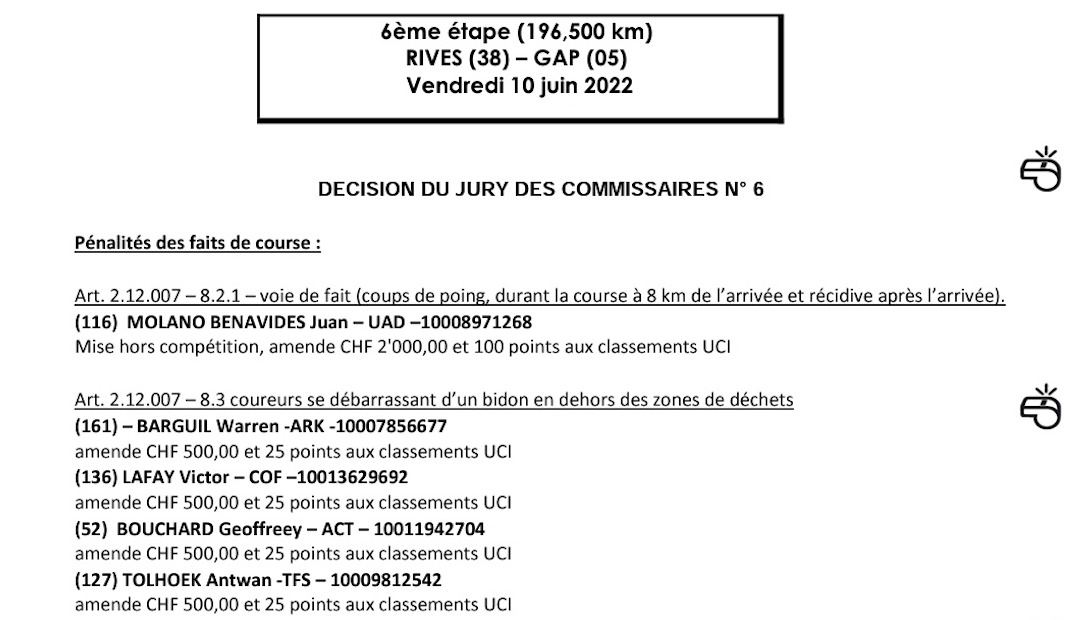 First a cropped screengrab of the commissaire report from from Stage 6 of the Dauphiné, it shows fines for punching and littering, both cash and UCI points, visible a reminder that points can be won by results… and forfeited by breaking the rules.

Valverde is going to Florida
Second, Movistar’s Eusebio Unzue is the latest to lament the points scale. He’s wisely calling for reform for the next set of years, and not going on a rant because his team faces the drop. What this and more shows is that for years few people, team owners and fans alike, ever paid attention to the rankings, let alone how they were composed. We probably weren’t supposed to either, to find the points tables you had to root around the UCI website, find the right 280 PDF document, scroll to page-whatever.

But the importance of points for World Tour and ambitious Pro Conti teams isn’t new, the three year promotion/relegation system was announced in 2018. Sure it’s a hot topic which is why you’re reading this weekly update. But from a structural perspective it’s a bit like a US Presidential candidate clocking that their voting system uses an electoral college derived from absolute majorities on a state-by-state basis, and so campaigning in swing states, especially those that supply many electors, could be a good idea. Given we’re halfway through the third and final year, it’s the equivalent of October in a US campaign and a bit late to remark some races, like US states, have more points than others. Just as politicians flock to “battleground states” like Pennsylvania or Florida, we’re now beginning to see several teams pay very close attention to the races that offer plenty of points. Today’s Mont Ventoux Dénivelé Challenge is a case in point, and a chance for teams with climbers to score points.