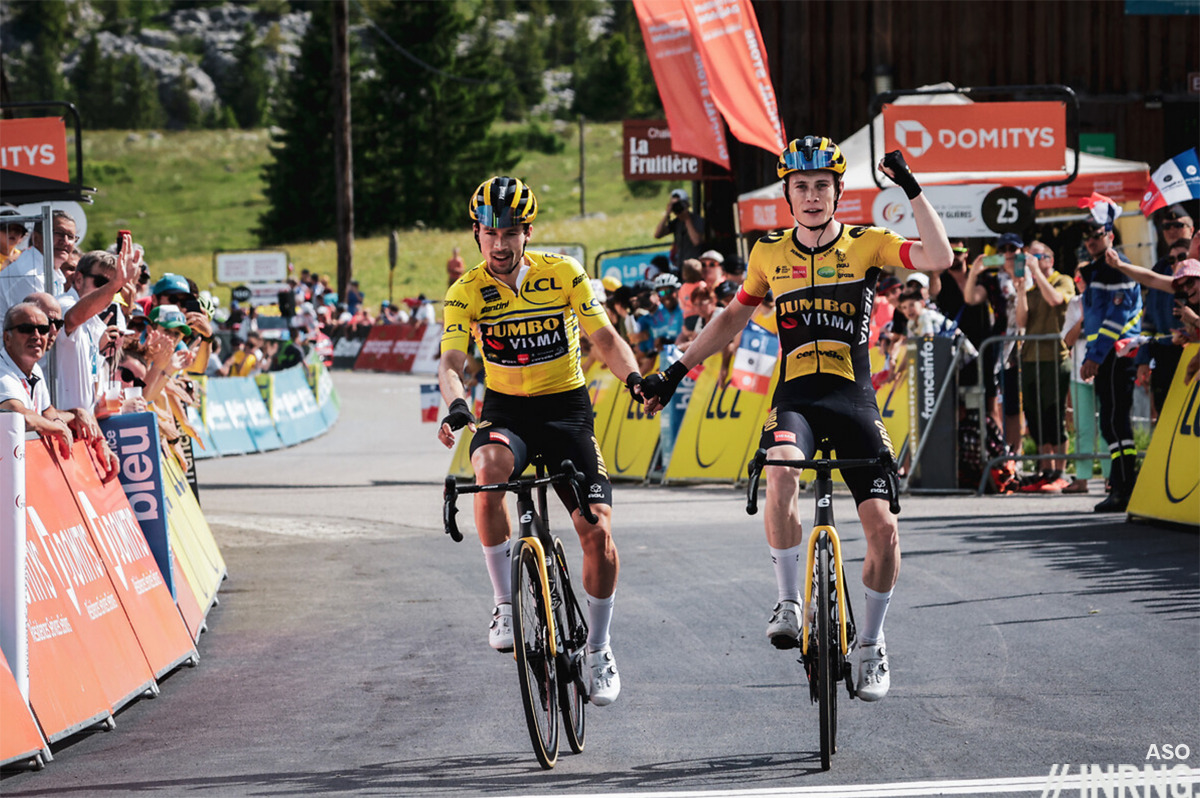 It’s hard to pick a winning moment as to review the startsheet before the race was to pick Primož Roglič and after a week’s racing the result now feels like an inevitable formality. But he did a great time trial to ride away from the other GC contenders, including thirty seconds on his team mate Jonas Vingegaard and this allowed him to be well clear of everyone. He didn’t defend but attacked come the mountains and on the last day only Vingegaard looked stronger and enjoyed a stage win for his support.

The Critérium du Dauphiné invites us gaze up from the road and to the Alps and their ridges and peaks, and then to look beyond and imagine what lies over the horizon: what will July look like?

This year’s Dauphiné did at times look like a giant Jumbo-Visma training camp, like boxers who’d invited others to spar with them. They could conceivably have won every stage if things had gone their way: if another team had helped chase a bit more into Brives-Charensac, if van Aert hadn’t sat up to celebrate, if he’d found an extra two seconds in the time trial. But all that is conditional and if sport was so obvious few would watch. 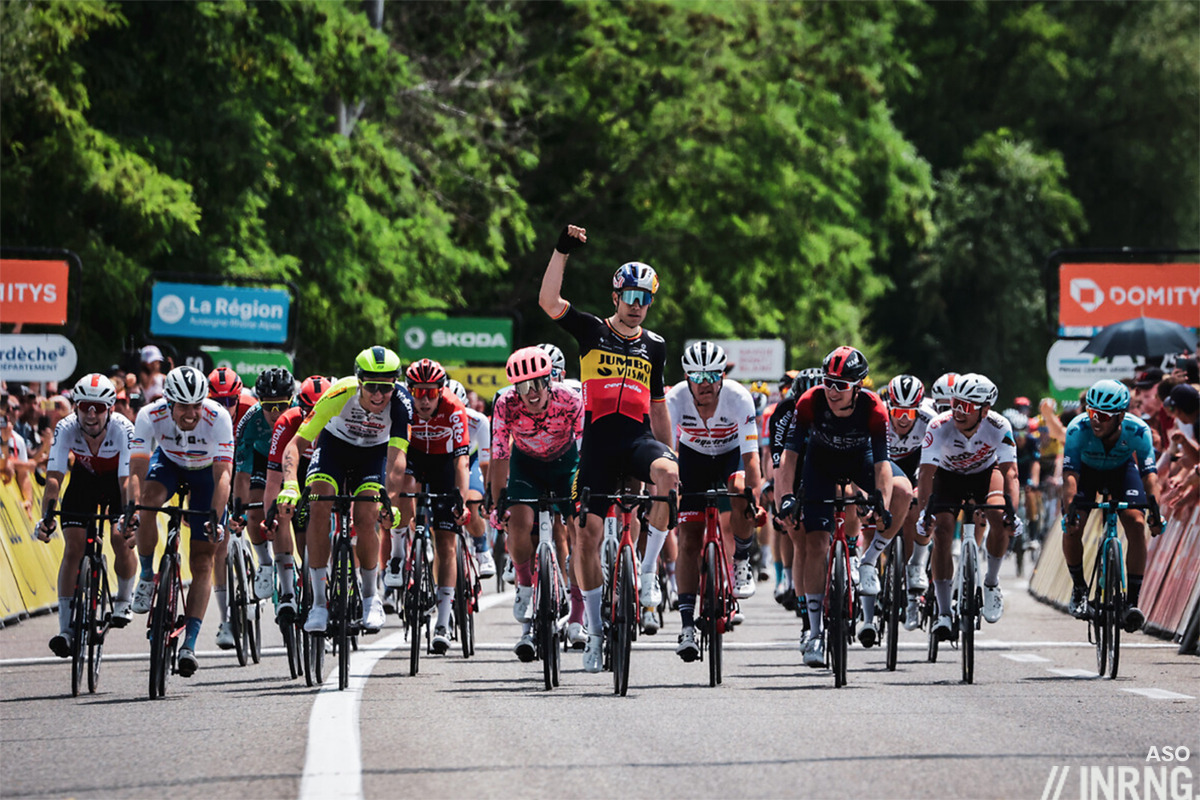 Particular circumstances meant Jumbo-Visma did get the lion’s share, and their share of toy lions too. First the course deterred many sprinters which advantaged Wout van Aert on some days, many potential GC rivals for the Tour de France were not there either and the pre-race preview here was clear Roglič was ahead of the rest just on the startsheet. Jumbo-Visma brought their almost-Tour team when others did not. Add that to Wout van Aert’s range, which is like the Dauphiné as keeps expanding from one region into another. He can sprint and two stages and the points jersey will be satisfying but being just two seconds behind Ganna must be the most tantalising, as with fresh legs for Copenhagen rather than days of sprinting, he will fancy his chances for the yellow jersey. 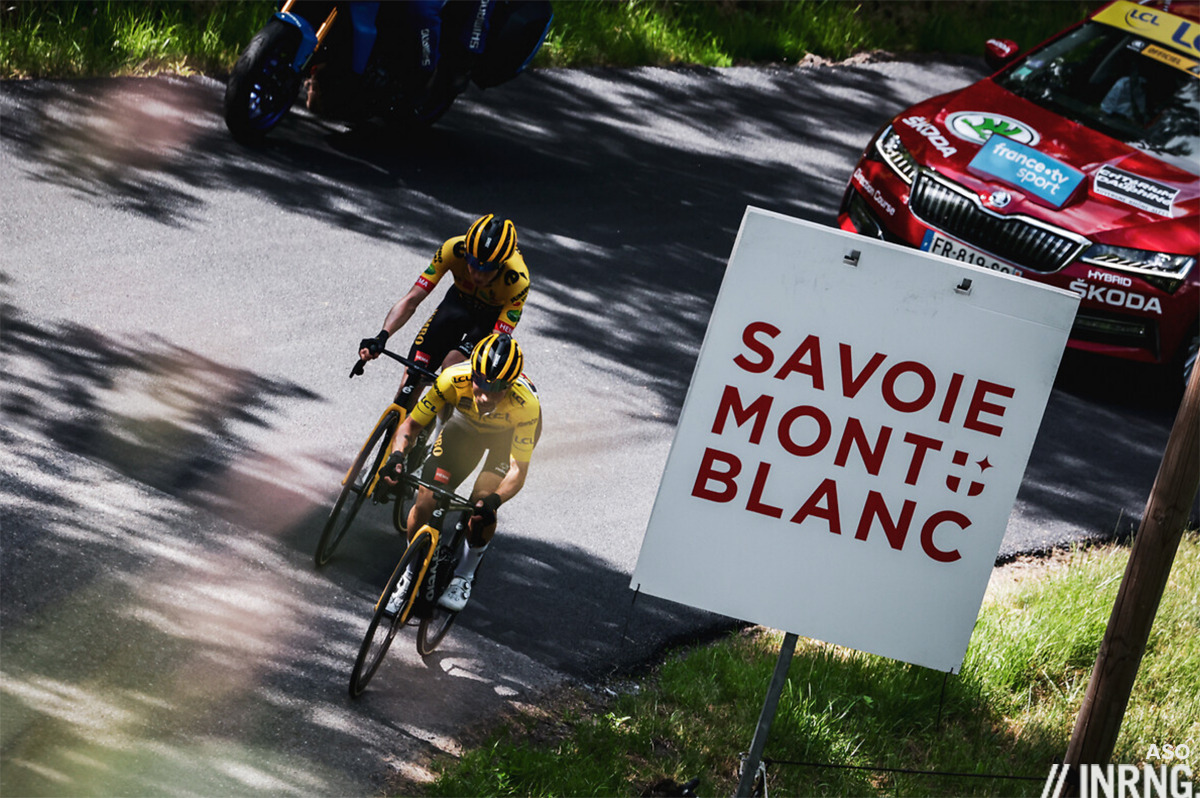 Presumably terrabytes of bandwidth will now be used speculating on whether Roglič or Vingegaard is the team leader. For Jumbo-Visma management though surely there’s no hierarch? Having two leaders is better than one as they can keep both their rivals… and their leaders guessing alike, prompting both Roglič and Vingegaard to be at their best, something Sky/Ineos have done before. There’s almost never a scenario when the team has to decide between them, as if both puncture while level on GC and there is only one spare wheel. Instead it could be a crash, an off-day, or simply the racing that decides. Vingegaard seemed to wait at one point on the last stage but Roglič has that zip for stage wins and time bonuses but always a question mark about constructing a perfect three week run. All the more reasons to deploy both, arguably the harder questions are who their teams picks in support, the balance of support between GC ambitions and helping van Aert take stages and the points jersey.

Ben O’Connor rounds out the podium and deservedly so, he was a decent 14th in the time trial stage and among the GC contenders, then on the weekend’s summit finishes he was just behind the Jumbo-Visma tandem, including being only 15 seconds behind on Sunday’s Plateau de Solaison finish. It’s a great result but the Dauphiné means extrapolating from June into July and if he can podium now, what can he do in July? Yes he seems to be improving but he’ll face a deeper field in July, it’s that awkward balance of trying aim for the podium but knowing that while fifth place is laudable, a stage win might bring more value. But just being at the front of affairs is a big performance and keeping this form is his challenge.

It was one of those glass half-full/empty weeks for Ineos, a stage win with Ganna and they were close with Ethan Hayter for more stages, but only an 8th overall for Tao Geoghegan Hart who was downplaying his ambitions, it’s more we’re used to the team setting the pace in this race. UAE fared worse, Juan Ayuso had a great time trial and Brandon McNulty and George Bennett seem to be coming into form but to work for others.

David Gaudu got a stage win but his GC bid imploded on the last day. His time trial performance was solid but the heat proved his undoing, like Mont Ventoux during last summer’s Tour de France. He’s off to Tignes now for more altitude training but could do with time training in the valleys below too as a heatwave arrives across much of western Europe this week. 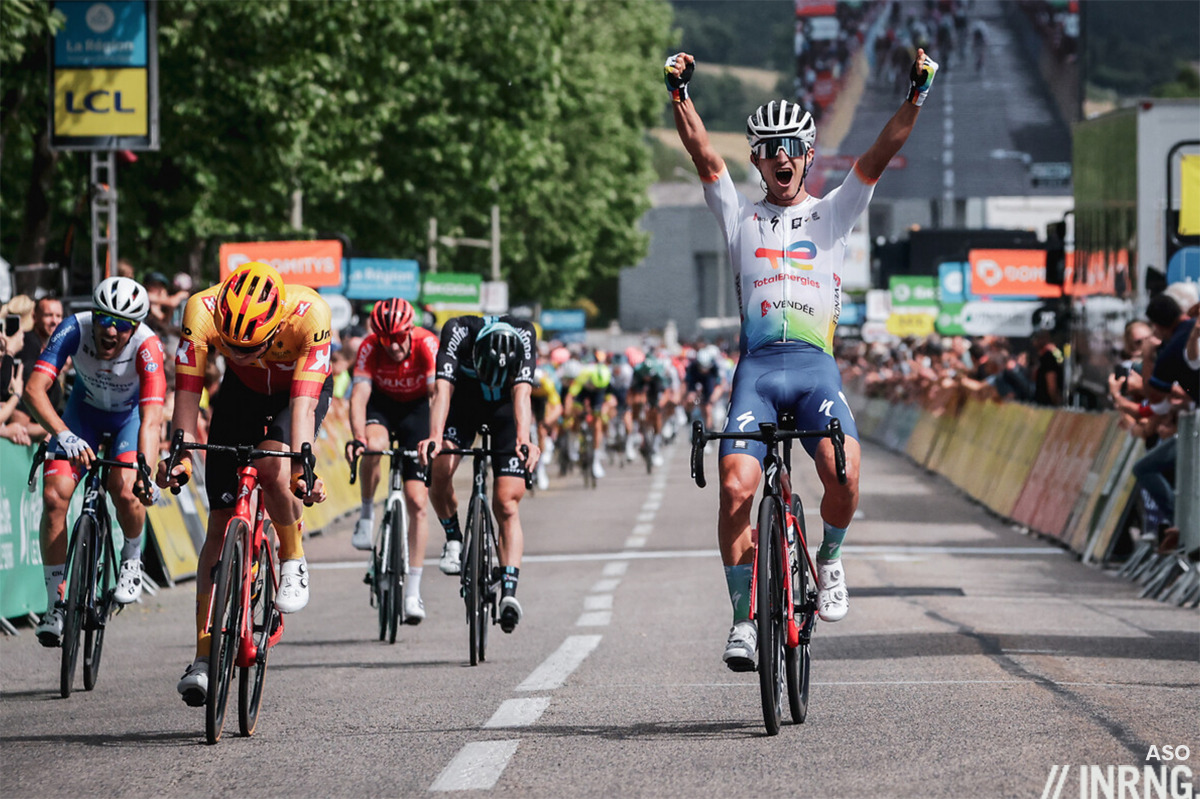 Among the other rides, the smaller teams thrived. TotalEnergies had a great week with two stage wins. It’s rare for second tier ProTeams to win in the World Tour so two home wins will have management beaming. But their eyes are already on the Tour de Suisse, where Peter Sagan’s form is in question and with it, whether he starts the Tour de France. 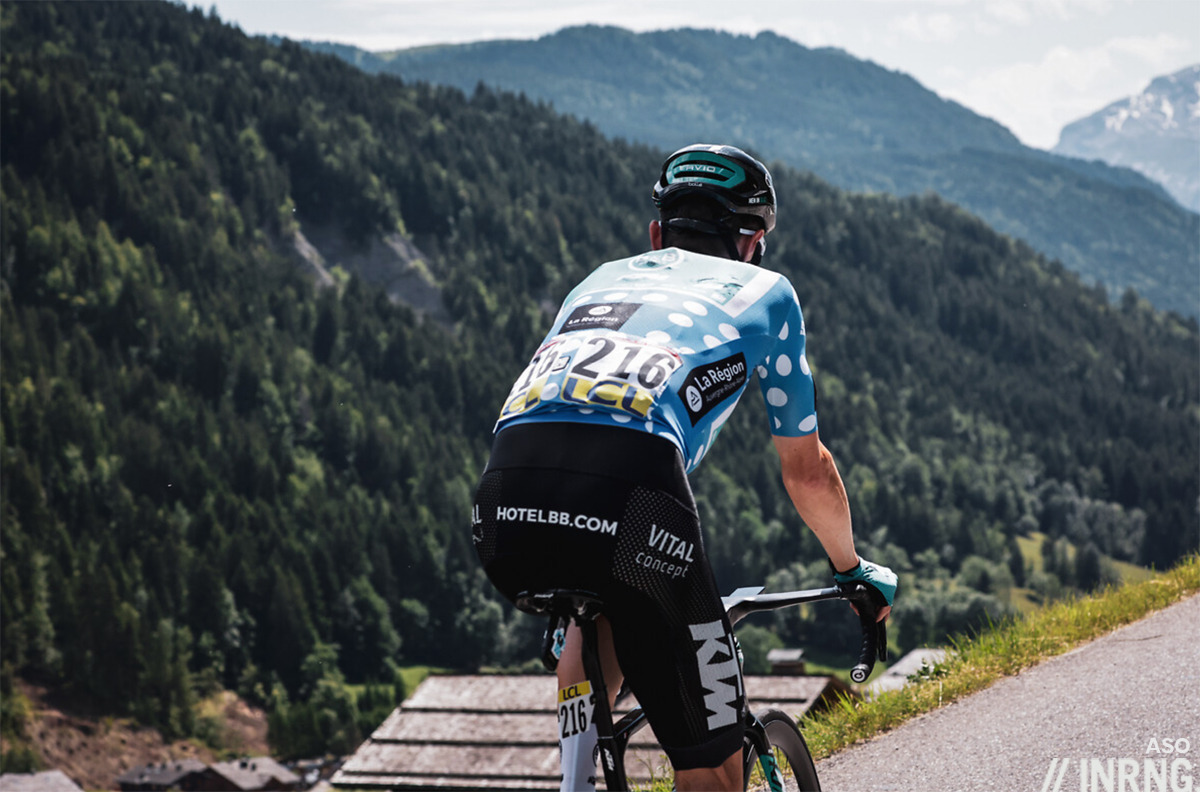 Pierre Rolland took the mountains competition, turning a breakaway on the first day that got him the jersey into a weeklong project and success and going full circle to 2008. He and the B&B team needed this with Uno-X jostling for that wildcard, the Norwegian team won the white jersey with Tobias Halland Johannessen. There’s talk B&B could land a big new sponsor but if that happens, it’s another thing to ensure it’s sustainable and build a stronger team, but it’d be a start. 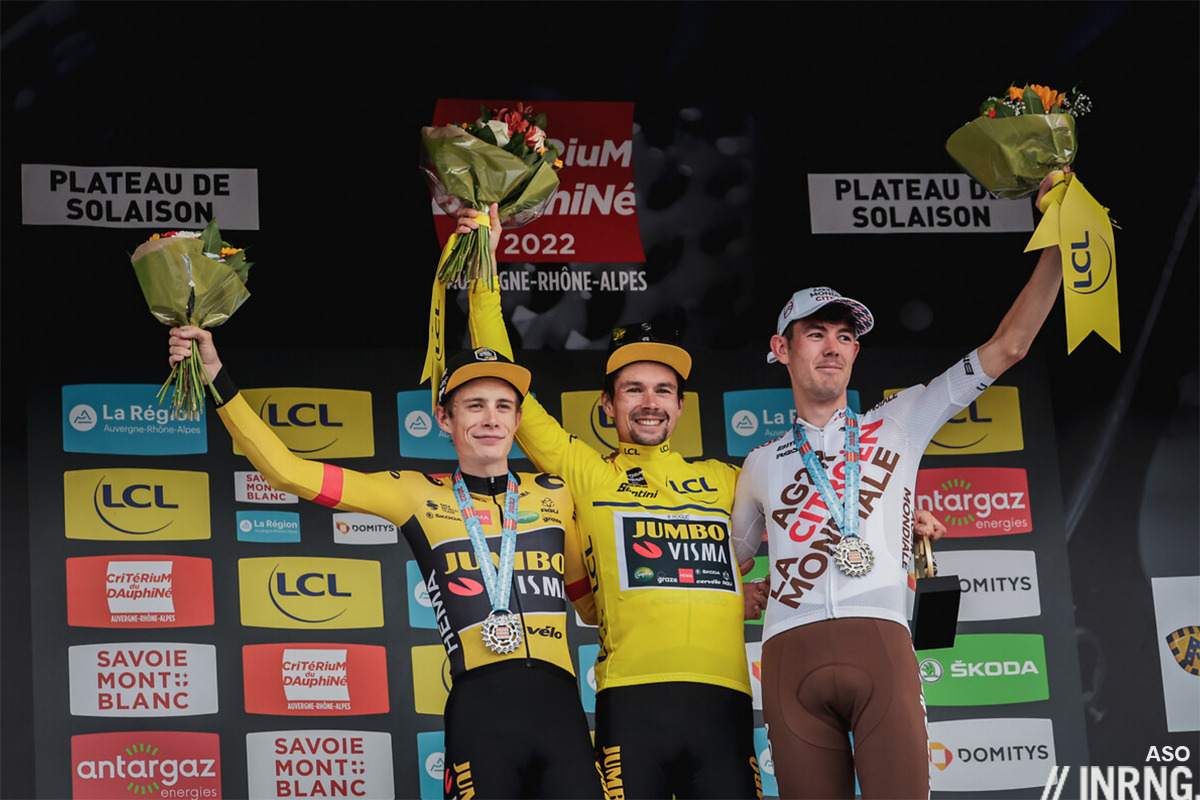 The Verdict
Predictable but entertaining. To write stage previews was to tip a Jumbo-Visma rider almost every day but there was still suspense. The hilly stages invited breakaways where some stayed away, but only just while those that were caught were reeled in with sight of the finish, both on the flatter stages and in the mountains alike, Carlos Verona’s win was exemplary as he won from the breakaway but with a chasing Roglič in sight behind him in the finishing straight.

Jumbo-Visma will be purring after their week. Neutrals worried about dominance needn’t be, imagine if they’d also faced Pogačar in the mountains or van der Poel for the hilly sprint stages, or add on many other names. This is where mouths start watering ahead of the Tour de France. There are sometimes complaints that the best riders don’t ride together all the time. But if the Dauphiné, Suisse and Tour startlists were identical then what good would that be, who one episode last week in France, and repeat in Switzerland and the same cast again in July? We’re in the phase where we look to the mountains for clues, whether in France last week, or Switzerland, Slovenia and even Strava this week. The Tour de France is tantalising right now because it sits over the horizon and we can only imagine what awaits.