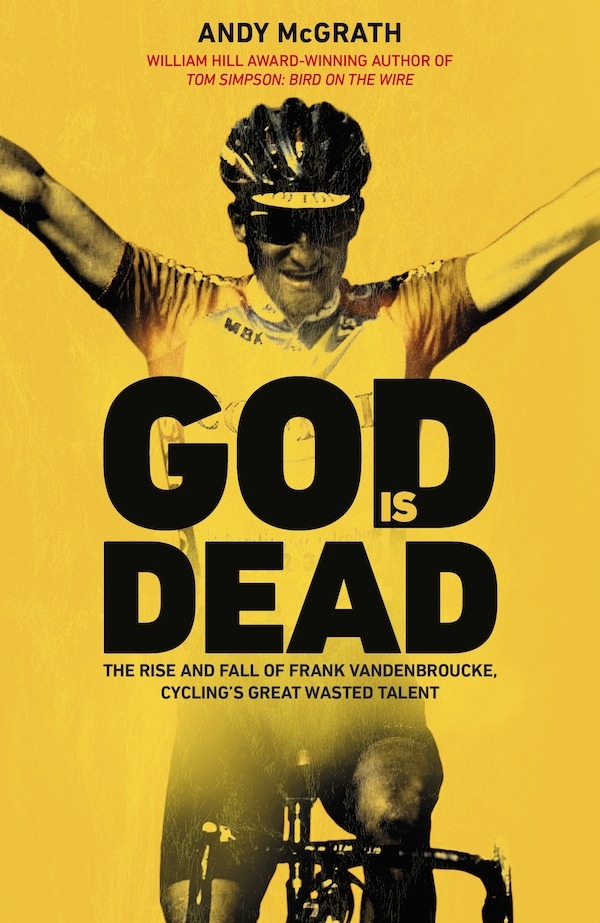 God Is Dead by Andy McGrath

A biography of Frank Vandenbroucke and a warning about celebrity.

The last book review combined cycling with Nietzsche but here “God Is Dead” refers to Frank Vandenbroucke, the Belgian cyclist who died in 2009, aged 34. For years he was venerated as more than a champion in his homeland, a celebrity with a touch of deity. Indeed they did call him “god”, but his autobiography refuted this with its title of Ik Ben God Niet (“I Am Not God”). Crucially, and similar to Eddy Merckx, Vandenbroucke straddled the linguistic and social divides of Belgium, a Walloon but from the border where he’d walk to school in Flanders and was fluent in Flemish. This helped his popularity, winning plenty did too but Vandenbroucke had that bit extra. He was photogenic and had a feline grace on the bike, he’d rock his shoulders a bit and his hips would twist when pushing a big gear but it didn’t look laboured.

Vandenbroucke became famous for the things he could do on a bike, and obviously this matters a lot in Belgium but he also became a celebrity, a personality who went from the sports pages to the gossip columns. The title is hardly a spoiler but it does mean Vandenbroucke’s death weighs on the book. Unlike “Chekov’s gun” on the table, here we know there’s going to be a death so you read wondering if events along the way are part of an arc leading to something; or just events.

The more obvious pattern is everything pointing to a career as a pro cyclist. He was part of a dynasty, his grandmother was the championne of France in 1926 and his uncle Jean-Luc Vandenbroucke was a prodigy who turned pro early. It’s not in the book but one detail about how Vandenbroucke tried to tilt things in his favour is his bed, he’d put a phonebook (remember them?) under each of the feet at the end of his bed so that he’d sleep with his legs raised slightly, the idea was this would help with recovery. Quaint given the doping regimes to come but here was someone living and sleeping cycling and if he’d been born a generation earlier or later perhaps things would have turned out for the better?

The early part of the book chronicles his effortless ascendency and there’s a lot here that you will read for the first time, especially in English. Vandenbroucke tried several sports, got into running but switched to cycling in his teens. Aged 14 he accompanied his father Jean-Jacques, a mechanic, to the World Championships in Chambéry and joined the pros for a ride in the Alps. “Who was the kid that rode with us? We couldn’t drop him” asked Claude Criquelion, “That’s my son,” Jean-Jacques replied.

The talent was great but this meant a bidding war with several teams racing to sign him and this rings the first alarm bell. He turned pro aged 18 which is still rare today, in 1994 it was sensational. It seemed justified when he landed a win in his first race, a Stage of the Tour Med. Only there’s no long term programme, they just want him for the results he can bring and the Lotto team, run by his uncle, desperately needed a top Belgian rider. In this era delivering results equated to industrial doping and the substance of the time, EPO, couldn’t even be detected for a long while. Vandenbroucke’s time in court seemed, like others, to bring him down to earth as practices tolerated, and even encouraged via the incentives on offer within the sport, were suddenly frowned on when made public.

What’s striking is just how out of control things were and yet nobody could stop it. Teams were paying him a fortune but there was little oversight, like buying Formula 1 car and parking it in the street rain or shine. You can’t diagnose via a book but the highs and lows read like bipolar depression only nobody was on hand at the time to help. We know this happened to many, we know Cofidis was a madhouse where management had all the authority of replacement teachers trying to teach a rowdy class as riders abused sleeping pills and alcohol. Several accounts from the late Philippe Gaumont to David Millar to Thierry Loder, the Swiss rider who couldn’t cope with the bullying and quit the sport – relate this but the book of course covers Vandenbroucke’s aspect, he had the pivotal role as a team leader, so talented he had to be indulged rather than sanctioned. Other teams were little better and the shadowy figure of Bernard Sainz lurks in the background. Once again when it comes to doping, entourage matters.

A series of teams but by now Vandenbroucke’s career is on a downhill path and each contract seems worse than the previous one, signed by both sides more in hope than reality. For all the sporting side, the book sets out the private, family life as well and this is all the more tragic. It’s one thing to see a career fade, another a father.

There’s no final reckoning on Vandenbroucke’s death. He died in a seedy hotel in Senegal and McGrath sets out events as best as he can. Matt Rendell’s biography of Pantani was able to pour over documents and witness accounts leading up to his death but VDB’s death happened alone on holiday and there’s less to investigate, besides the Belgian media’s trod the path already.

A thought experiment is to imagine what would happen if Vandenbroucke was of today’s generation. In between we’ve got the case of Tom Boonen who moved to Monaco, presumably attracted by the tax rates but also repelled by the Belgian media trying to pry into his private life and he was public property for a while, famous at the races but if he went to a shop or a nightclub it could be news too. The obvious case today is Remco Evenepoel, already “Remco” to the Belgian media in the way Vandenbroucke was “VDB” but apart from precocious talent and concern that Evenepoel’s every move is being tracked, you’d like to hope things are different today. But are they ever?

The Verdict
An English language biography of Franck Vandenbroucke, a page-turner even if you know it’s going to end in sadness. You might have read some of the stories and seen the results but this book covers plenty more, especially the early years. It’s a sensitive account, there’s no revelling in the amount of drink and drugs taken nor the money wasted, no hyperbole is used to pull in the reader. Given the bleak ending it’s hard not to read this constantly looking for clues as to whether his early years put him on an inexorable trajectory to a seedy hotel in Senegal while also wondering if moments along the way could have changed his tragic destiny.

Read to learn more about Vandenbroucke’s life and times, and also to be alert when a rider is feted excessively when they’re winning and blasted when they’re not.

God Is Dead is published by Bantam Press / Penguin.

A digital copy was sent free for review. More books at inrng.com/books