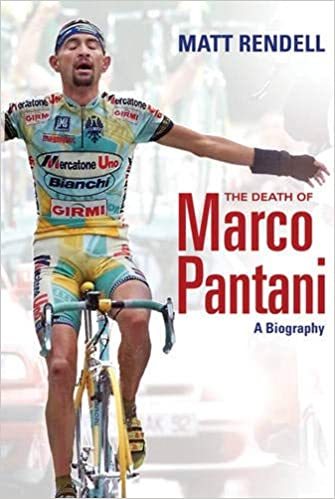 It might be St Valentines today but scanning Twitter it’s Pantani day to commemorate his death on this day in 2004 and the excitement he generated during his life.

There are a lot of books about Marco Pantani. Most are Italian. There’s a French one by Philippe Brunel, La Vie et Mort de Marco Pantani which is a good account. Brunel shuttles back and forth between France and Italy, Paris and Rimini to piece together the last moments of Pantani’s life and seems so suggest Pantani was a victim of conspiracies, whether his ejection from the Giro whilst leading the race, or his death in a hotel room.

But The Death of Marco Pantani is surely the best, being well-researched and a full biography of Pantani, from his early days to the post mortem.

It’s hard to identify why Pantani is still a celebrated figure. Maybe the premature death was like that of a rock star, although Pantani never went out in his prime, he’d been screaming downhill for some time. He seemed doped to levels that could make a Kelme doctor nervous but this doesn’t halt the nostalgia. There are several monuments on mountains. I’ve seen several “Il Pirata” bars that borrow his image. You can still buy merchandise, from t-shirts to bandanas.

Perhaps it’s because he was an artist? He spent time painting but his greatest work was on the bike, with pedal strokes replacing brush strokes. If almost everyone was using EPO back then there was no level playing field but there was a blank canvas at the start of a race. You didn’t know what would happen each day and with Pantani you often got art. Others rode in a linear fashion, calculating their efforts but Pantani seemed opposed to this spreadsheet sport. I can still remember his attack on the Galibier in the 1998. The Tour had been ruined by the Festina affair but Pantani salvaged something with his move, attacking in cold rain to leave Jan Ullrich floundering although the German’s failure to eat and don a rain jacket was actually as much to blame but the victors write history, no?

Well it’s here Rendell’s book appears. The myth is deflated but in a procedural fashion. The theme of doping is too often associated with the rider when of course it takes a team with managers, doctors, pharmacists and more. Rendell explores the circles around Pantani from his family to team management and later, to those trying to help him whether night club owners or clinicians.

The book reads well and this is worth noting because Rendell has assembled a vast quantity of quotes, statements, data and more and is able to weave these into a full story. In fact as an exercise you can open a page and count the facts listed. A random example, page 205, when Pantani is stopped for speeding on the autostrada we get the location of incident, that the police used a laser gun to measure the speed, the speed recorded, the local speed limit, the fine awarded and more. This matters because unlike so many other books Rendell isn’t presenting sensational hints of mafia involvement or police corruption.

Still if there’s a weakness to the book it’s when Rendell betrays this meticulous research to speculate on possible problems with Marco Pantani, to diagnose mental illness and then attribute this to his actions. He may be right but it’s a speculate leap away from the narrative analysis that fills most of the book. But it feels impossible not to guess, to wonder what could have been different if someone had acted differently along the way whether years ago or just in the hours before he was found dead in the hotel room.

Rendell paints a damning portrait of those around Pantani. Friends, staff and above all managers seem unable to cope with him, at times treating him as human ATM, if they could only get him back on the bike they’d hear the whir of banknotes being readied. Manuela Ronchi in particular comes out looking bad. She’s published her own account to explain things.

Rendell’s book is the cautionary tale of the man presented as the rider, fans might stand on a mountain to watch a legend ride past but strong legs and viscous blood can hide a wavering mind and a weak heart that feels alone with no cheering fans once the race is over. The book can be relentless with the facts but it’s still a complete story, more than others.

If you’ve read the book already you might be pleased to know a documentary film on Pantani is under production and involves some of those behind the excellent “Senna” film from 2010. The release is scheduled for May this year to coincide with the Giro.

A list of previous book reviews can be found here: inrng.com/books