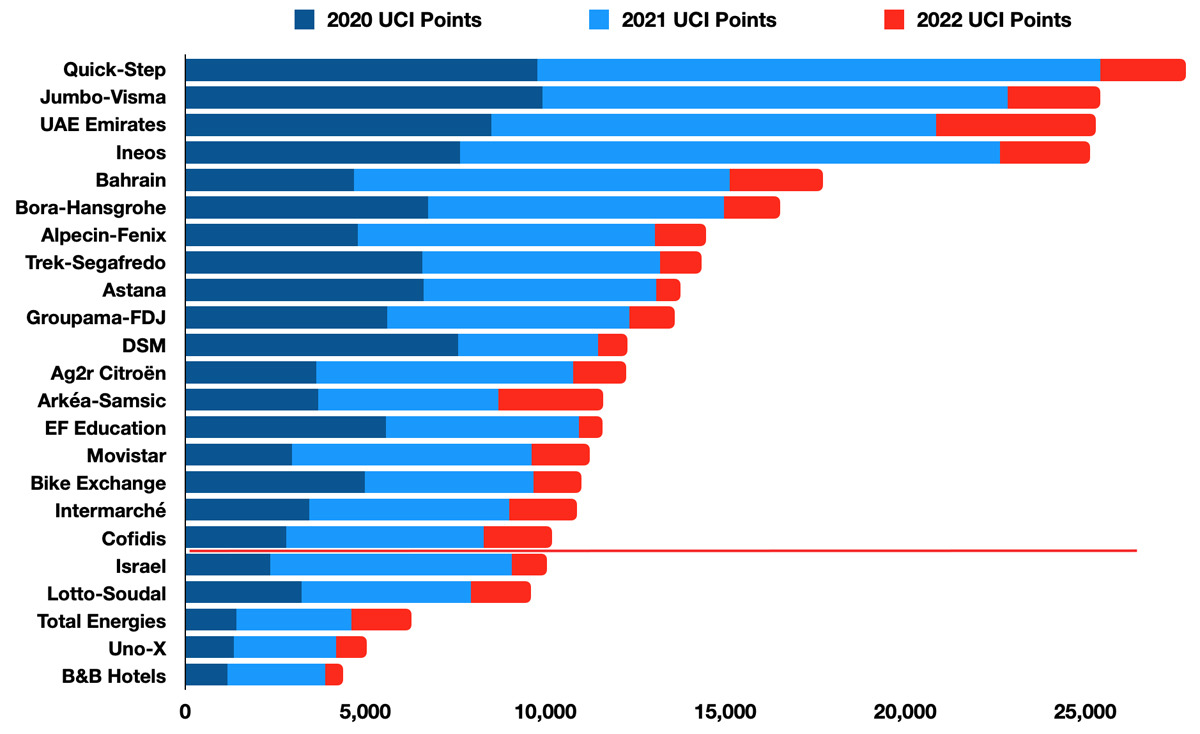 The weekly update and a significant moment as there’s the first change among the top-18 teams. Cofidis climb out of the relegation zone, overtaking the Israel-PremierTech team which slips to 19th place.

Israel-PremierTech are like someone who’s gone for a walk on the beach and got a shoe wet from a rogue wave, they’re hardly up to the neck in salt water. It’s news that they’ve slipped to 19th place but in a long season all can change and we should keep our eyes on other teams. We’ll see how Israel score in the coming months, there’s a current injury worry for their top scorer Giacomo Nizzolo who fractured his wrist in Sanremo and could miss some races. But Michael Woods should thrive in the Volta a Catalunya this week, especially as there’s no time trial this time. Strategically we might wonder if relegation matters to the team, after all it’s a project primarily funded by wealthy hobbyists rather than a marketing project driven by strict commercial imperatives. But things are bound to get crunchy because as things stand – stress caution again, it’s still March – if Israel were to get relegated they’d not get an automatic invite to the grand tours. Would races invite them and if not, what happens to the team?

One reader said this was a gimmick last week and they’re right. But it’s better than a line chart, trying to get 24 lines of data, label them and spot the differences is too much, the chart is too messy for the desktop or phone screen you’re reading now.

Background info
If this is all new to you, then at the end of the season in October the top-18 teams based on the three year rankings meet the sporting criteria for WorldTeam status. Teams outside of the top-18 risk being relegated down to UCI ProTeam status which means they are not guaranteed to start in the biggest races like the Tour de France.

The UCI publishes rankings overnight between Monday and Tuesday. The rankings are compiled from the sum of UCI points won by each team’s 10 highest scoring riders for each season, 2020, 2021 and now 2022, as shown in red on the chart above. You can see the points available in different races in the UCI Points and Rankings Tables Explainer post from January.