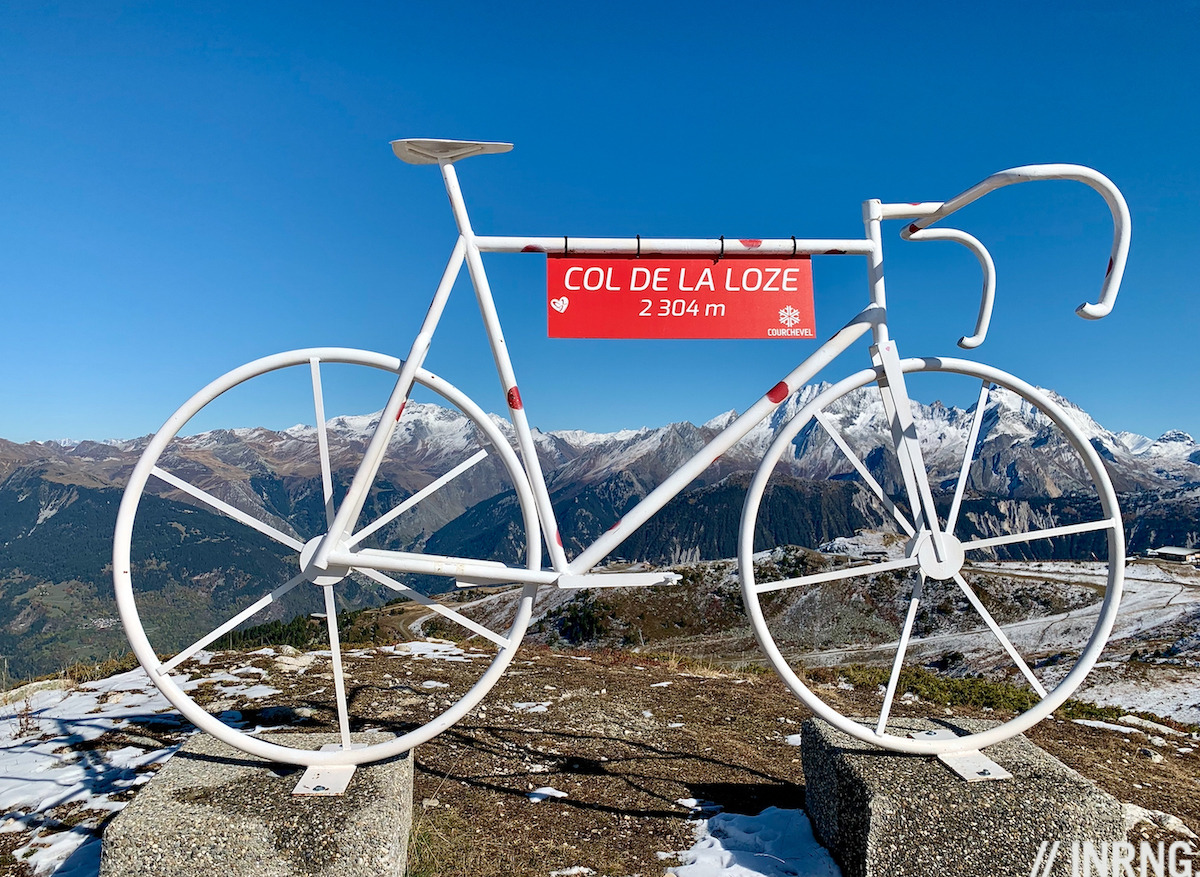 The Col de la Loze is the newest paved climb in the Alps and the high point of the 2020 Tour de France. It’s also a confounding climb and the world’s most sporty cycle path. 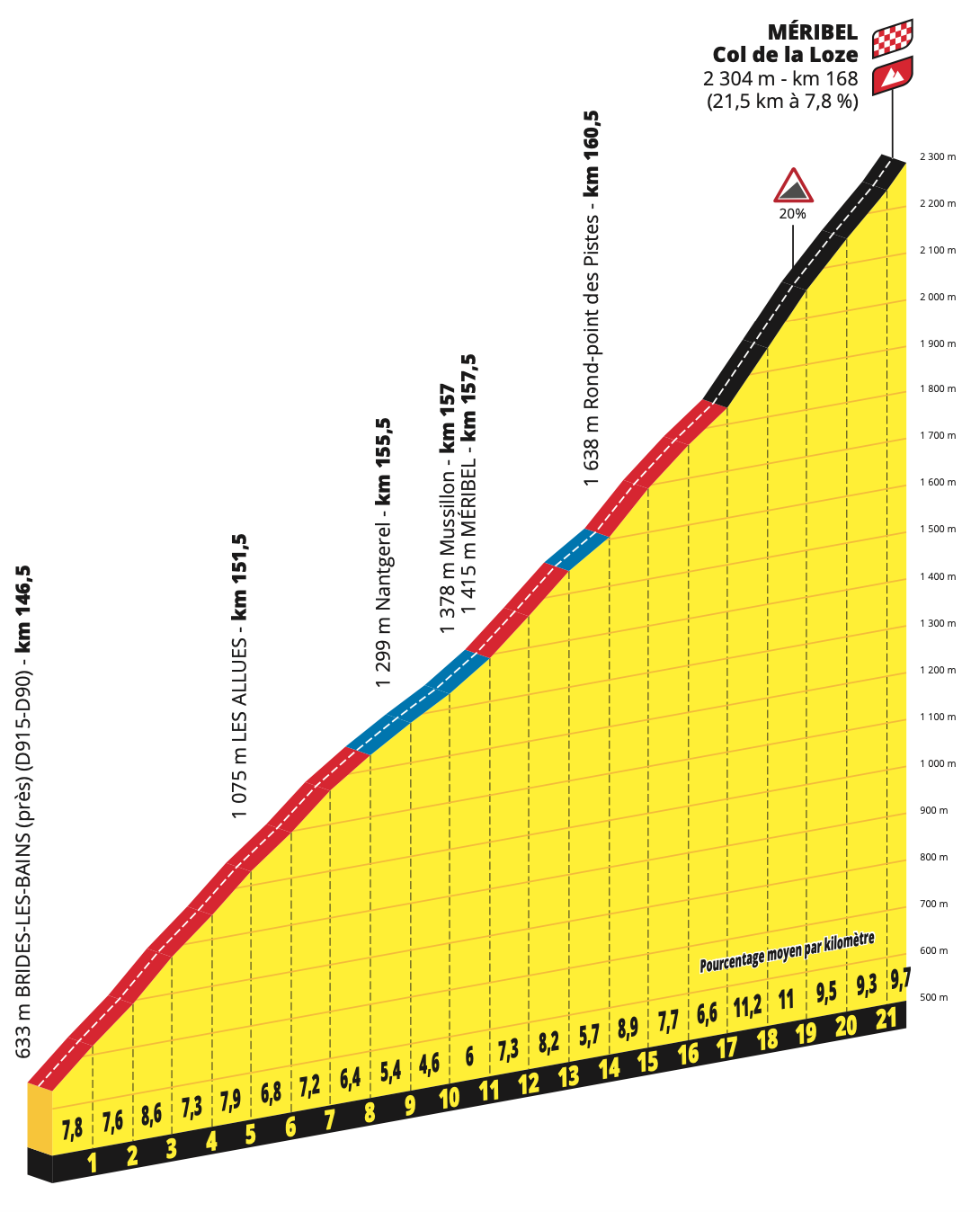 The Route: first take the old road, the D90 starts from Brides-les-Bains in the Savoie départment of France and goes to Méribel. Along the way, at the only roundabout, ignore the signs for Méribel-village and go right for the ski station. Once in the resort of Méribel follow the signs for the Rond-point des Pistes and the Altiport. The final 7km are on the new Montée de la Loze cycle path. In total it is a 21.5km climb with an average gradient of 7.8%. 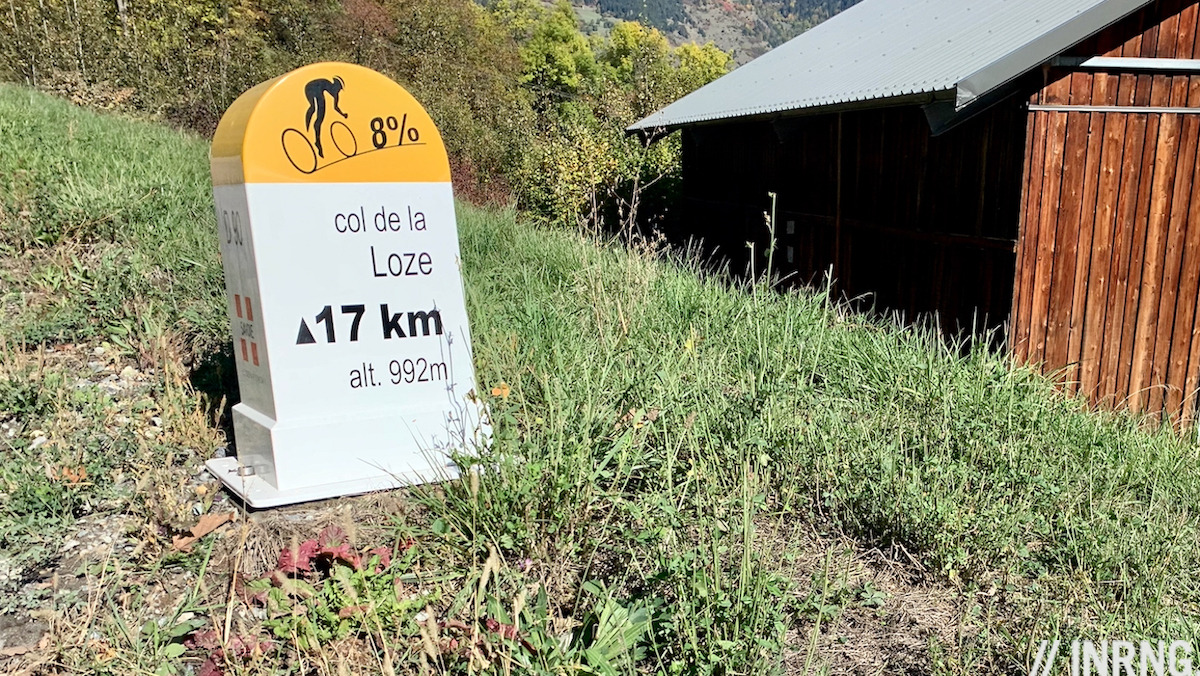 The Feel: climbs all over the Alps now have markers every kilometre telling cyclists the average gradient ahead. Here the first ones warn of 8% again and again so the start is no picnic. Still the road is wide and there’s new tarmac to help you climb fast. Tarentaise cattle, bells jangling, graze beside the road. It’s pleasant but not picture-postcard scenery, it vibes ski station access road thanks to the amount of buildings and street furniture. More scenic is the ridge of mountains high above topped by the serrated peak of the Dent de Burgin, a world away. 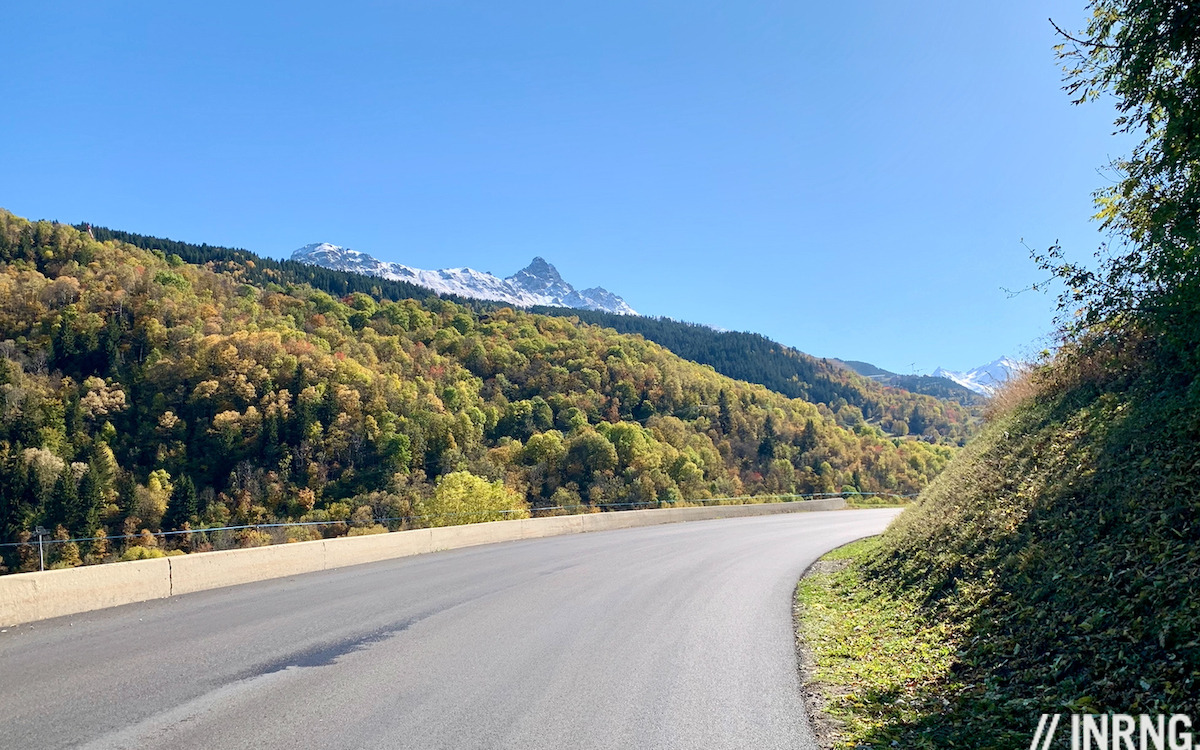 As a ski resort, Méribel’s not big but it’s still a town to pedal through when you came for the great outdoors. The Col de la Loze is brand new, aim for the Rond-Point des Pistes and look for the Loze cycle path.

The first impression of this new road is instant: an urgent need to change down as many gears as possible as there’s a really steep ramp to clear. Once you’ve crested this brief obstacle there’s a double-take as you realise you’re not on a road but cycle path reserved for cyclists and hikers. 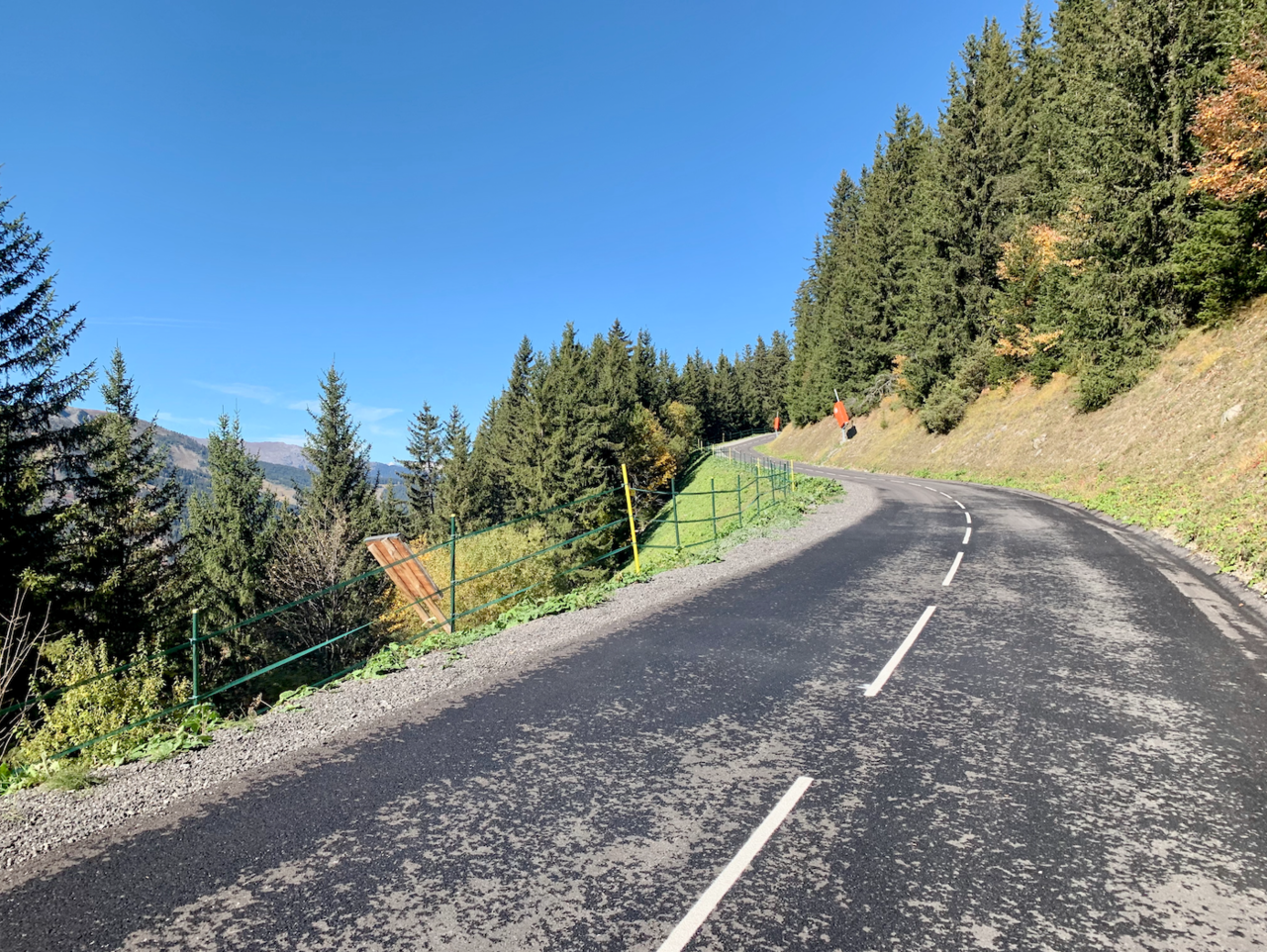 Having glanced at photos online things looked normal with fresh tarmac and a dotted white line down the middle: just like any other road. Only it’s a question of scale and there’s a Lilliputian feel as the road you thought you saw turns out to be cycle path little more than three metres wide. You ride past snow cannons, a clue this is actually a ski run during winter. After a kilometre there’s a tight hairpin and suddenly you’re confronted with road rearing up in the woodland. The first thought was along the lines of “this is crazy, never mind racing up, it’ll be hard work in a team car” and images of team managers pumping clutch pedals and working gear sticks. From here the climb turns into something unlike anything else in the Alps. It’s confounding as there’s fresh, high quality tarmac but the slope keeps changing like a mountain bike course. There’s a section at 22% before it flattens out for a few metres and then rears up again and from here on the changes of pace keep on coming. There are plenty of 15% ramps, plus hairpins and sharp corners. I’d have taken more photos but it was too steep to pull out a phone and didn’t want to put a foot down. 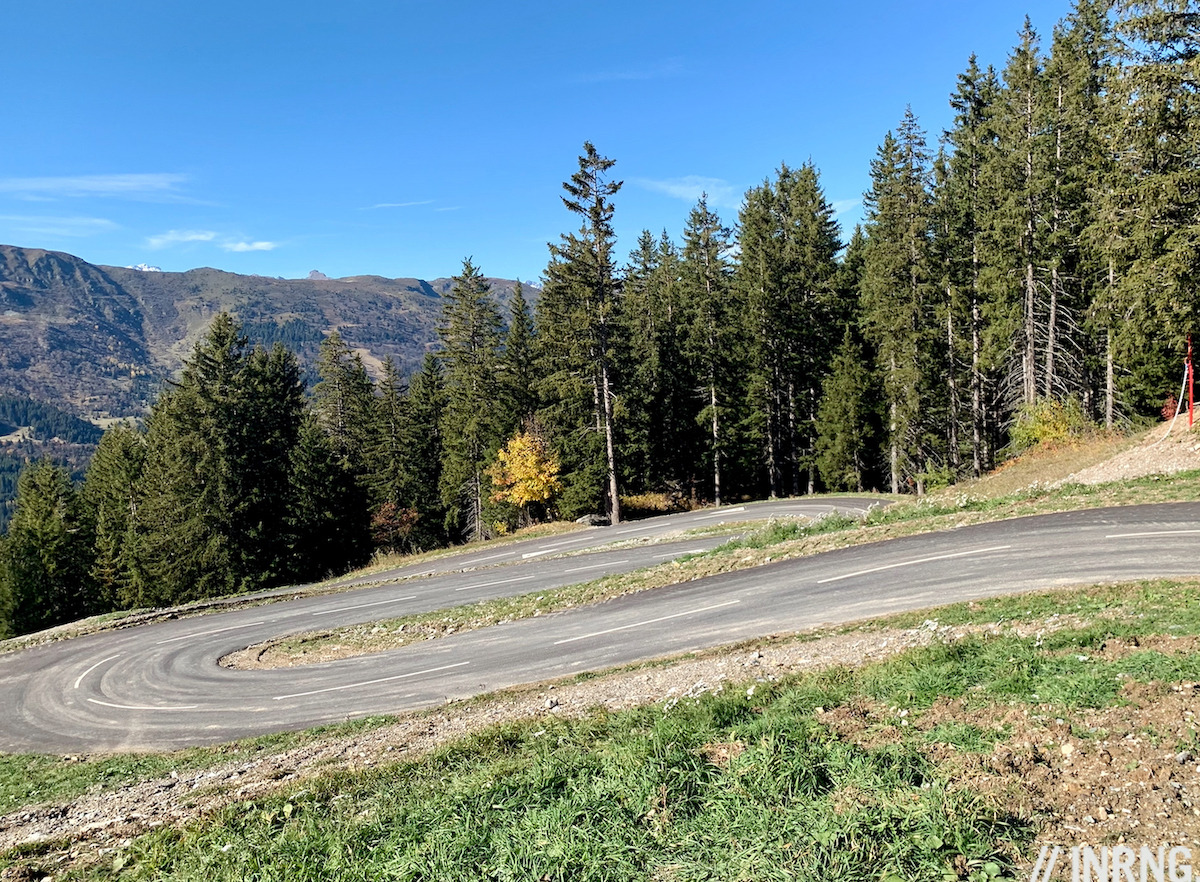 The Col de la Loze is a tarmac bucking bronco. It’s hard to get into a rhythm, the temptation is to power up the steep parts and recover in between only you’re 2,000m altitude now and oxygen debt comes with a penalty interest rate. The secret is to use your gears a lot to level the effort out as much as possible but this assumes you’ve got with the right ratios because whatever you’d spin up the nearby Iseran or Cormet de Roselend you’ll be leg-pressing here. It’s not the Mur de Huy all the way up, the defining characteristic is the frequent, abrupt changes of slope, no profile graphic can capture this. As you ride past ski lifts the Dent de Burgin which earlier looked so far away is now so close it looks like the path is going to reach it. 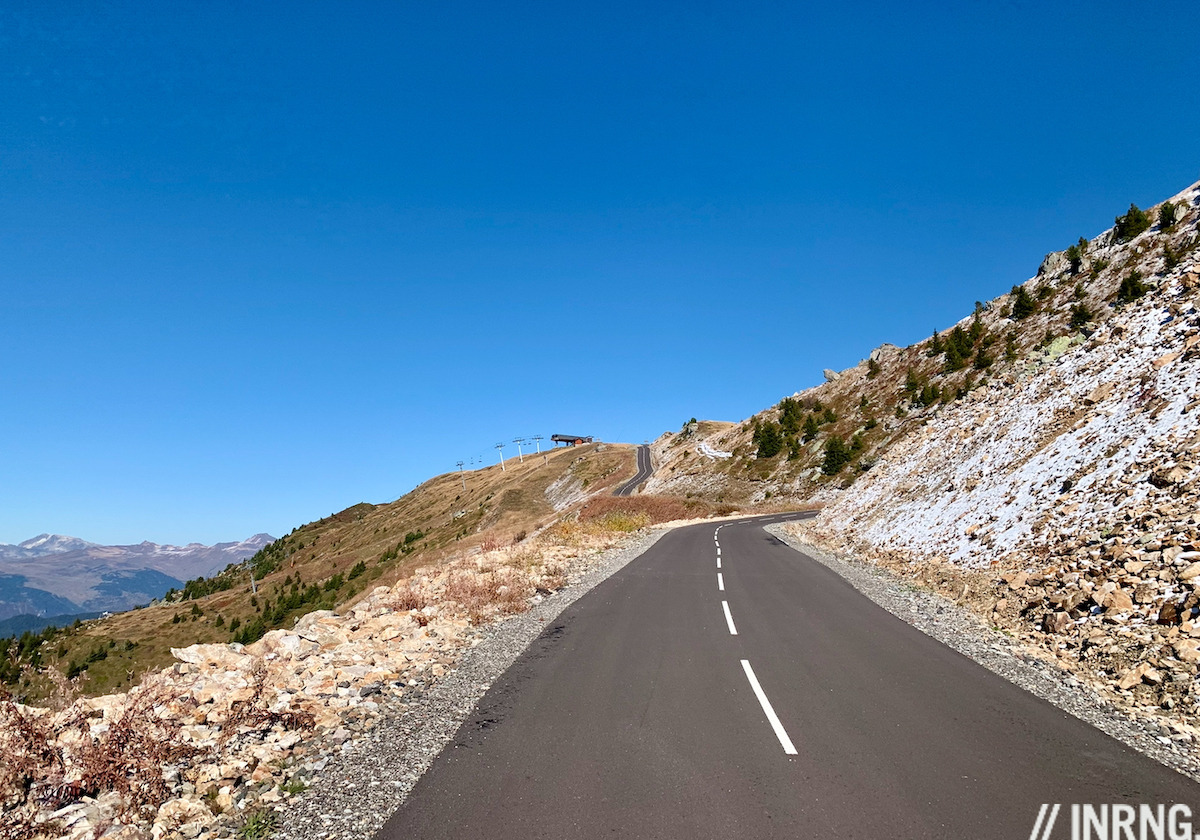 Then with about two kilometres to go you round a bend to point the other way. Here you can see the path as a long line ahead heading up towards the ridge. It’s less irregular and as you press on there’s even a descent to catch your breath. You can spot the final wall section from afar, a 20% just before the top. If this doesn’t take your breath away, the views at the top will. The ski resorts of Méribel and Courchevel are so far below you can’t see them, instead there are long views of the high mountains in 270°.

The Verdict: the road to Méribel starts with long 8% sections and good views but you’ll find the same kind of roads all over the region. Out of Méribel and everything changes thanks to the cycle path, narrower than a normal road. From here it’s 7.5km to the top and confounding with all the changes of pitch and with the altitude you need to measure your effort. It’s tough but you’re free to concentrate on the climb because it’s car free and the steep bits are short. It’s totally different to the usual Alpine experience.

What goes up: it’s a summit finish for the Tour de France but you can descend down the other side to Courchevel. The cycle path down the other side is wider and once it joins the main road follow the signs to Moûtiers to do a loop back to where the climb started. It’s not a great descent as you have to ride through Courchevel meaning traffic and but it’s the safer option compared to going back to Méribel. The narrow climb you’ve just tackled with tight bends and 20% sections is going to be awkward to descend. 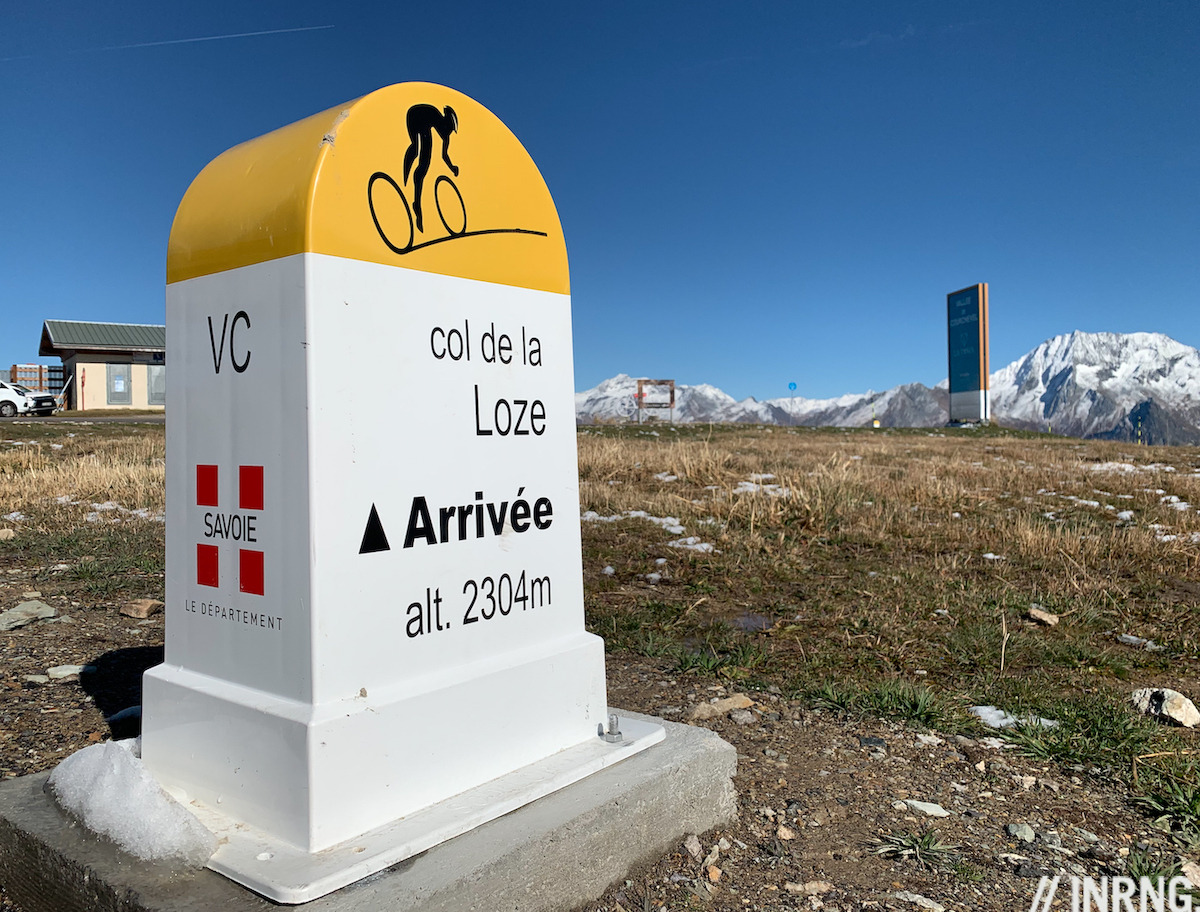 2274m or 2304m? The Col de la Loze may be freshly tarmacked but the pass is as old and listed at 2,274m. Now the new sign at the top of the climb says it’s 2,304m. Is this a touch of inflation, a push beyond the 2,300m barrier? It’s happens, the nearby Col de la Madeleine has a boastful sign declaring 2,000m when it’s actually 1,993m. Here the difference is that the geographic Col de la Loze is actually at 2,274m but you ride past this to reach the top of the road at 2,304m before descending. So the pass is 2,274m but the climb is 2,304m. Either way it’s now the eighth highest tarmacked mountain pass in France.

Why? Ski resorts want to be resorts, to enjoy a lucrative summer as well. Attracting cyclists is one way to do this, Alpe d’Huez is already a Mecca for road cycling tourism and several ski resorts compete to be the Downhill MTB paradise. The Loze is only “Stage 1” of the Via 3 Vallées with plans for a new path to cross from Méribel over to Val Thorens and then a link to the Maurienne valley which opens up a route for extreme Alpine cycle tourism.

On top of this is the e-bike boom. Many resorts have fleets of electric bikes and now a family of four will be able to tackle a “legendary Tour de France climb” before lunch, and all on a car free road. Still, you do wonder about inexperienced people being assisted all the way up and then having to descend again on a 15kg bike… perhaps the Loze chairlift works to take people back down safely?

History: the Tour de France last visited Méribel in 1973 for a finish inside the town at around 1,700m and Bernard Thévenet won the stage. The race hasn’t been back since. In August 2019 the Tour de l’Avenir rode up the freshly-surfaced Col de la Loze and footage on youtube lets you see some details:

Ride more: Méribel and Courchevel are now linked but are towards the end of their respective valleys. Nearby Moutiers and Salins les Bains sit at the foot of the valley and offer riding in several directions with the Madeleine, Iseran and Cormet de Roselend within range, it has the making of a base for hardcore cyclists looking to rack up plenty of 2000m+ plus clubs, but at the expense of more charming climbs and villages. Helpfully there’s a new cycle path on parts of the valley too.