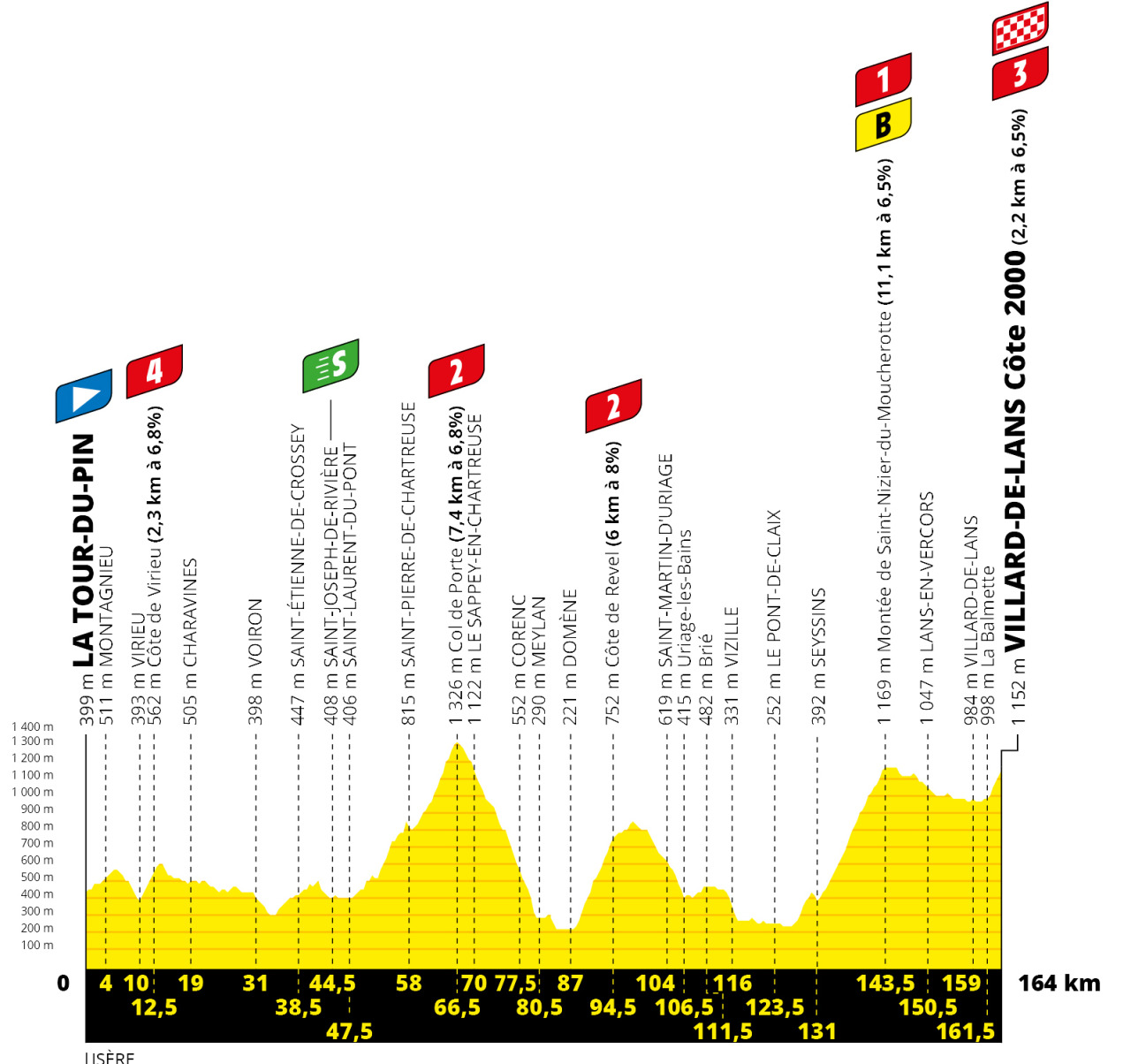 A stage to the Vercors range in the Alps, breakaway country and a scenic stage from start to finish. 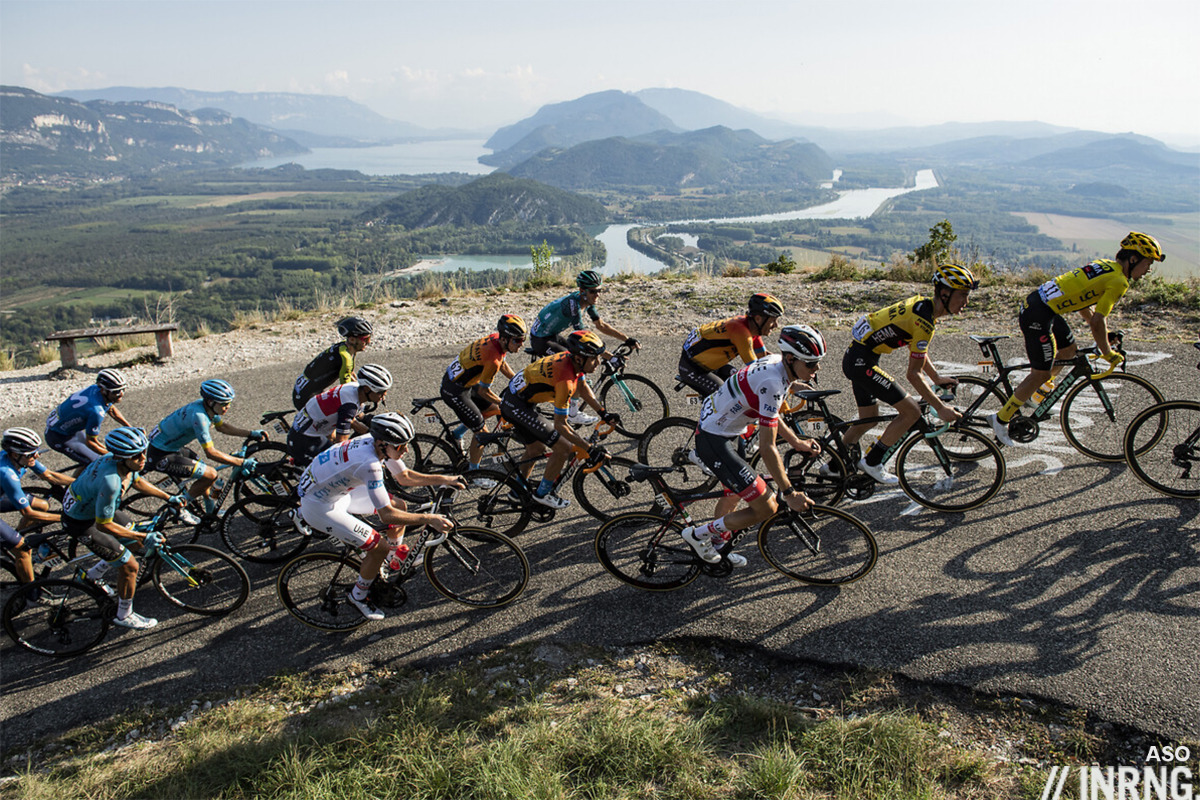 Race Review: two thoughts on the GC battle: First is the Roglič-Pogačar duel, it’s not as gripping as 1989’s Fignon-LeMond or 1964’s Anquetil-Poulidor because the race lead is not changing between them but it’s definitely a duel. Jumbo-Visma will be delighted if a breakaway goes up the road from here to Paris as it’ll mop up time bonuses while behind the team tries to throttle the race as much as possible to minimise the chances of Pogačar attacking, the 21 year old’s only hope is the Col de la Loze where the wildly irregular gradient thwarts tempo riding. The second contest is for third place with Uràn, Lopez, Yates, Porte and Landa all in with a chance right now. Porte is the best for the final time trial and looks to be the strongest uphill too but it’ll be worth watching how much they all mark each other for this spot, with Lopez and Uran riding a passive race so far. It might not be exciting nor memorable but this economical style works, see Steven Kruijswijk last year.

The Route: uphill from the start via Montagnieu appropriately enough (“mountainous”), there’s 5km at 4% before a quick descent and the second climb of the day, this time with a KoM point, and steeper.

Listed as 7.5km for the race the Col de Porte is a 20km climb, the first is up the Gorges du Guiers Mort and, as the name implies, goes up alongside a whitewater river, it’s more scenic but decidedly uphill with some steep parts at 7-8% further up that the official profile skips over. It’s spectacular in places with the road cut into the cliff, small tunnels and giant rocks overhanging the road. This leads to the Chartreuse plateau, once legendary in cycling for the trilogie and post-war racing exploits but out of favour of late. The road is steady and wide to the Col, first past open meadows and then into the forest at the top and this second half in the woodland is steeper with again some 7-8% to the pass.

Then it’s down the Col de Porte, a fast descent on a wide road with few difficulties although it’s famous the place where Bernard Hinault once crashed and, face streaming with blood, remounted and won. Today attitudes have changed and a chance to crowbar in the mention that the UCI will unveil a new concussion protocol in the coming weeks (it’s not in reaction to Romain Bardet’s crash, it’s been under discussion for months). Then it’s across the valley and the climb to Revel, two hairpin bends and then straight up the side of the Belledonne range at 8%. Then it’s across a balcony road with views of the valley below and the table-top Chartreuse mountains on the otherside before reaching the foot of the Vercors.

The climb to Saint-Nizier is on a large road. The Vercors plateau remains remote as it’s surrounded by steep cliffs and only a few roads wind their way up and this is one of the biggest and easiest.

The Finish: it’s called Villard de Lans Côte 2000 but this refers to the ski lift which climbs up high. Instead it’s 2km at 6% to finish at 1,144m high. It makes for a punchy finish that’s hard, but short of an Alpine climb. Rui Costa won here when the Dauphiné visited in 2015.

The Contenders: a breakaway day? Normally yes but the early moves are having trouble sticking. Today should work because Jumbo-Visma will be only too happy to see riders go up the road and mop up all the time bonuses while UAE Emirates don’t have the strength to lock the race down so that Pogačar could try to take the bonuses.

Bora-Hansgrohe and Team Sunweb collectively offer the obvious picks today. EF Pro would have been the third equal pick but having lost Sergio Higuita and needing resources to shepherd Rigo Uràn they’re a step below, maybe Dani Martinez is freed today. Tiesj Benoot gets a stage to suit and if he’s been nursing a back injury he’s looking better, Marc Hirschi no longer needs an introduction but for all his solo attacking he’s good at uphill sprints. Max Schachmann is Bora’s best shot and having been beaten two days running last week he’s had a bit of time to rest while Lennard Kämna is active but might need to go solo to win as his sprint’s not so strong. Still Dani Martinez (EF Pro Cycling) finds terrain to suit.

What of Ineos? The wheels have come off their bid this year so they’re all free to attack and it’s easier to name the riders who won’t be winning today: Luke Rowe and Egan Bernal. Bernal probably just needs a steady day and he’s not low enough on GC to get a free pass for the day; while Rowe was towing the peloton uphill in years past but pulled on the parking brake the moment the first climb started on Sunday.

Barring a Lazarus-style intervention, the CCC team looks to be folding soon but the riders are admirably cooperating and today Alessandro De Marchi and Greg Van Avermaet look like the best picks.

A trio of French picks. Julian Alaphilippe (Deceuninck-Quickstep) is obvious but he’s not got the magic of last year, still this is an ideal course. Nans Peters (Ag2r La Mondiale) is a local, the finish isn’t far from home but more importantly he’s suited for a course like this. Still, if he is a strong rider he’s not a strong pick for two stages. Valentin Madouas (Groupama-FDJ) has looked strong lately but almost too much.

Weather: warm and sunny, 30°C in the valleys

TV: live coverage from the start at 1.00pm CEST to the finish forecast around 5.30pm Euro time.