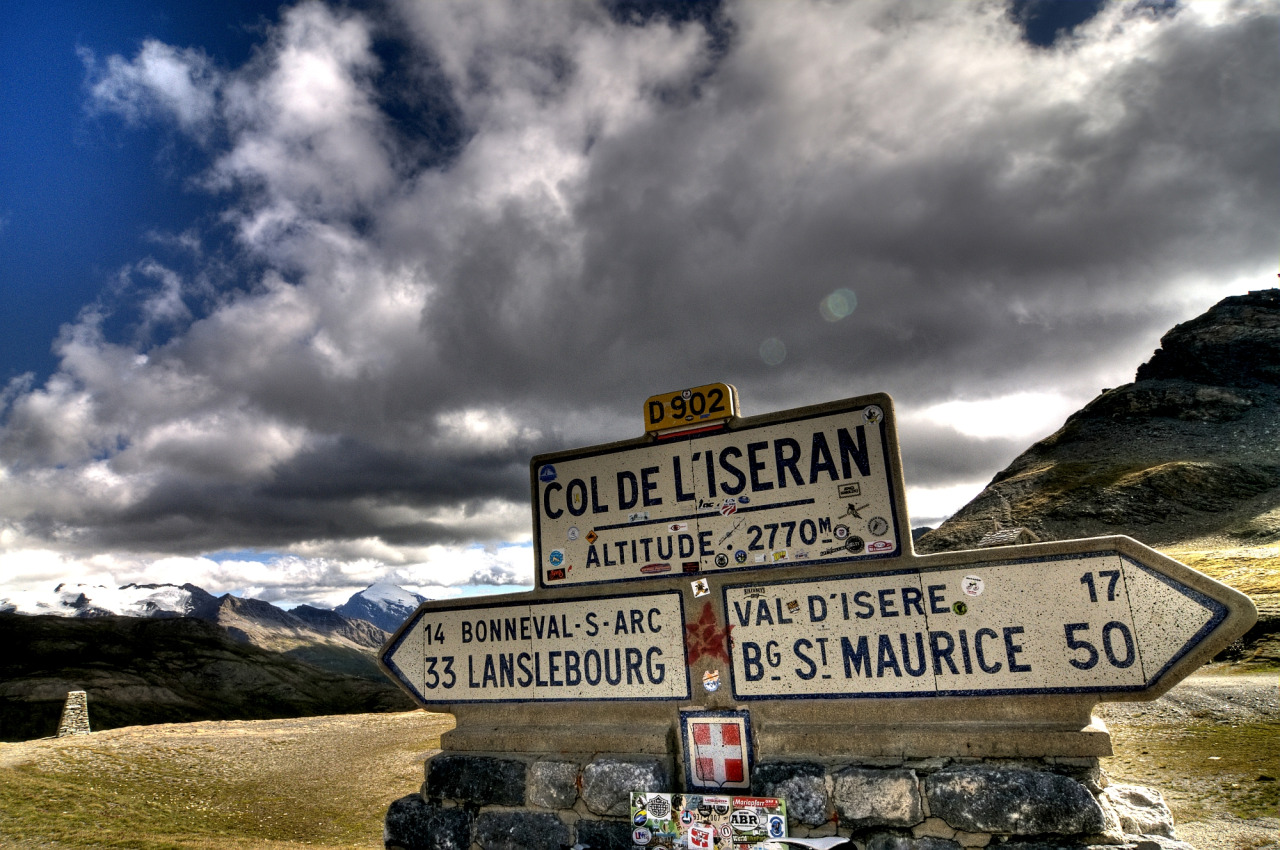 The King of the Alps. Europe’s highest mountain pass is more regal still thanks to the views and its length. At 48km this France’s longest paved climb. Used sparingly by the Tour de France, it’s a big high altitude test in two parts, a busy traffic artery, then the calm upper slopes.

The Route: there are two roads up. This is the giant 48km route from Bourg St Maurice on the D902 road passing near the ski resort of Tignes and through Val d’Isère before reaching the pass situated at 2,764 metres above sea level. On average the gradient is 4.4% but this is distorted by a flat middle section.

The Feel: out of Bourg St Maurice the first thing you’ll notice is this is a transport axis rather than a quaint Alpine escape, the sound of trucks instead of the Sound of Music. The road soon splits with the turning for the Col du Petit St Bernard which leads to Italy, an important crossing point, and helpfully this siphons away some of the traffic. At first the road is gentle, almost flat and wide, with that granular surface found all over the country. Of course the views are different and each passing minute brings you closer to the mountains.

The road starts to rise at the village of Viclaire and then gets serious with some wide hairpins on the way to the ski village of Sainte Foy. You know this is a long climb but the early slope bites, it requires self-discipline to take it really easy here. It’s still a big road and the traffic pins you to the edge of the hairpin bends but that’s no bad thing as you should be pacing yourself rather than carving uphill bends like it’s the Poggio.

On Michelin maps the road is a red artery and riding along you’ll see electronic boards informing you of the traffic conditions ahead, again this is no side road. On the bright side once you’ve got a rhythm you’ll stay settled for a long time. In the meantime the mountains are all around but you’re not getting big views yet as the valley walls are close and flanked by forests. 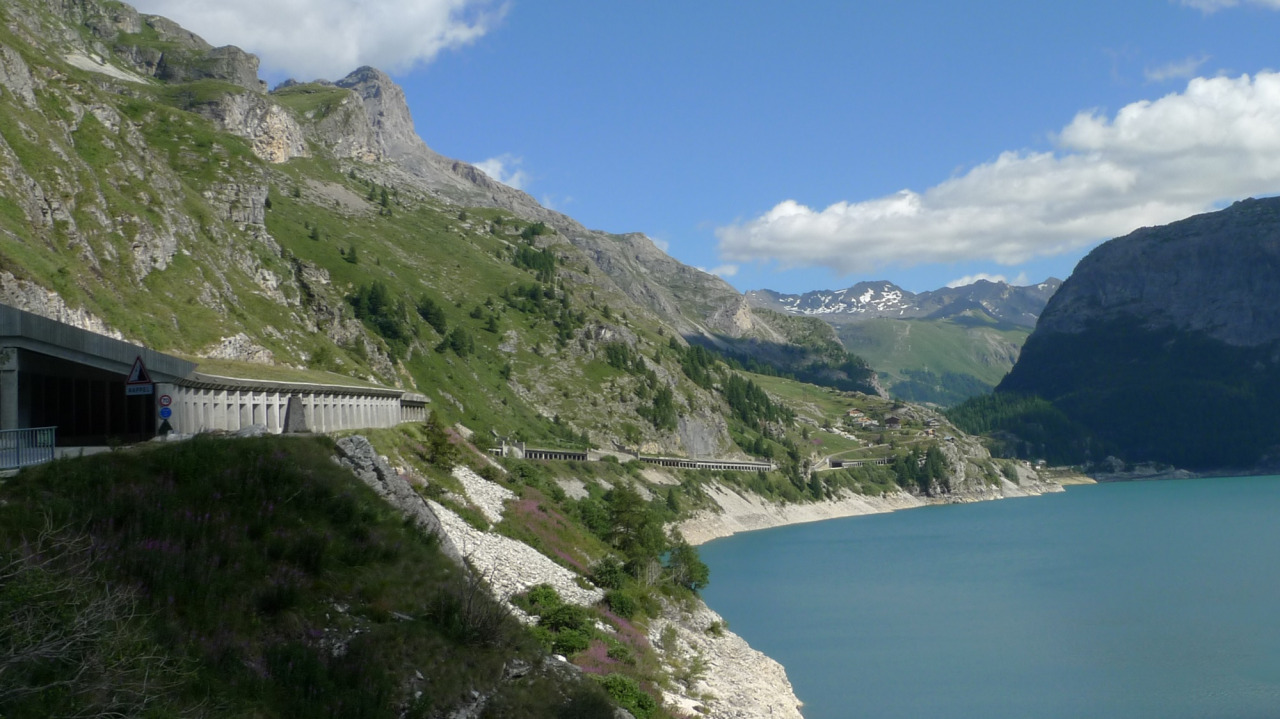 Keep a look out for the giant dam as a sign of progress. The good news is you’re about to get some flat roads for recovery. The bad news is you’re forced into a series of tunnels to skirt the lake retained by the dam. Tunnels feel strange, out on the open road you could theoretically tumble off the side of the road into the ravine while in a tunnel you can just scrape your elbow on the wall yet tunnels always feel more sinister, the smallest car sounds like a snarling truck and it’s a claustrophobic shift from the open expanse.

The profile shows a flat section but in fact there are descents but not of any great gradient, you’ll still have to pedal. By now there’s a temptation to turn around, save energy and use it for something more scenic. But push on because if the section between Tignes and Val d’Isère is dull, the rewards have yet to come. Val d’Isère is lined with apartment blocks for skiers and for once you’re grateful for the big wide road as you can speed through it all. In time the road picks up but gently, the slope is 5%, 6% and occasionally 7% as it tracks the valley upwards, there are few engineered contrivances beyond the road cut into the rock. 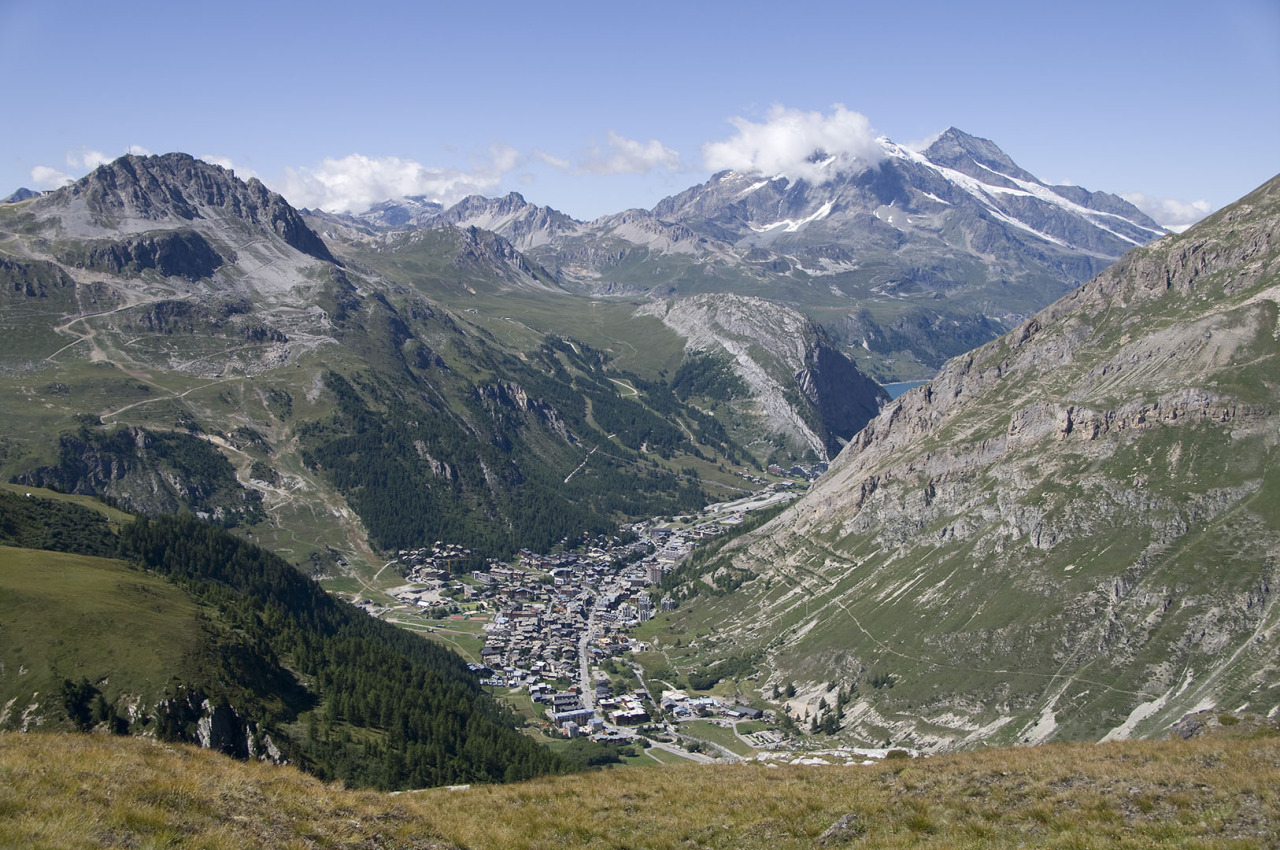 By now the beauty is apparent. Six months of snow is melting with water cascading off the rocks. Verdant pastures bloom with wild flowers. Apart from the road there’s little trace of human activity, a few blue and red signs mark ski pistes and redundant ski lifts hang idly in the cool air. The scenery is huge and expansive, this not Alpine confidential but instead a vast open area with long range views and the geological and glacial formations worthy of a school textbook rather than a ride. A few hairpins camp below the pass and the road rises to 8%, as if the road builders were in a hurry. The top arrives and there’s a small restaurant and gift-shop on top.

Onwards: you can descend the other side but don’t get carried away because a clockwise loop back to Bourg St Maurice via the Maurienne valley and the Col de la Madeleine is a 240km jaunt. Instead turn around to enjoy France’s longest descent, albeit interrupted by a few rises on the way down.

The Verdict: Antoine Blondin described the Iseran as a “liberal monarch”, if it the King of the Alps it remains approachable. It’s that approach that’s the problem, the road goes on and on. The early part made harder by the traffic, the middle by the tunnels, these efforts bring rewards with the upper section, a vast scenic expanse. Being the highest mountain pass in Europe does not make it the most scenic or rewarding but this label makes it memorable. You’ll be more marked by the length than the altitude.

The History: the route has existed for hundreds of years as mule pass and became an official road following a presidential decree in the 1920s with 600 workers toiling to make the road which was opened in 1937. But cyclists were scaling this before the road was completed, notably Paul de Vivie, aka Velocio. The local bishop decided to accompany the roadworks with the construction of a chapel – France’s highest – which was baptised Notre Dame de Toute Prudence, a useful tip for anyone preparing to descend at speed. 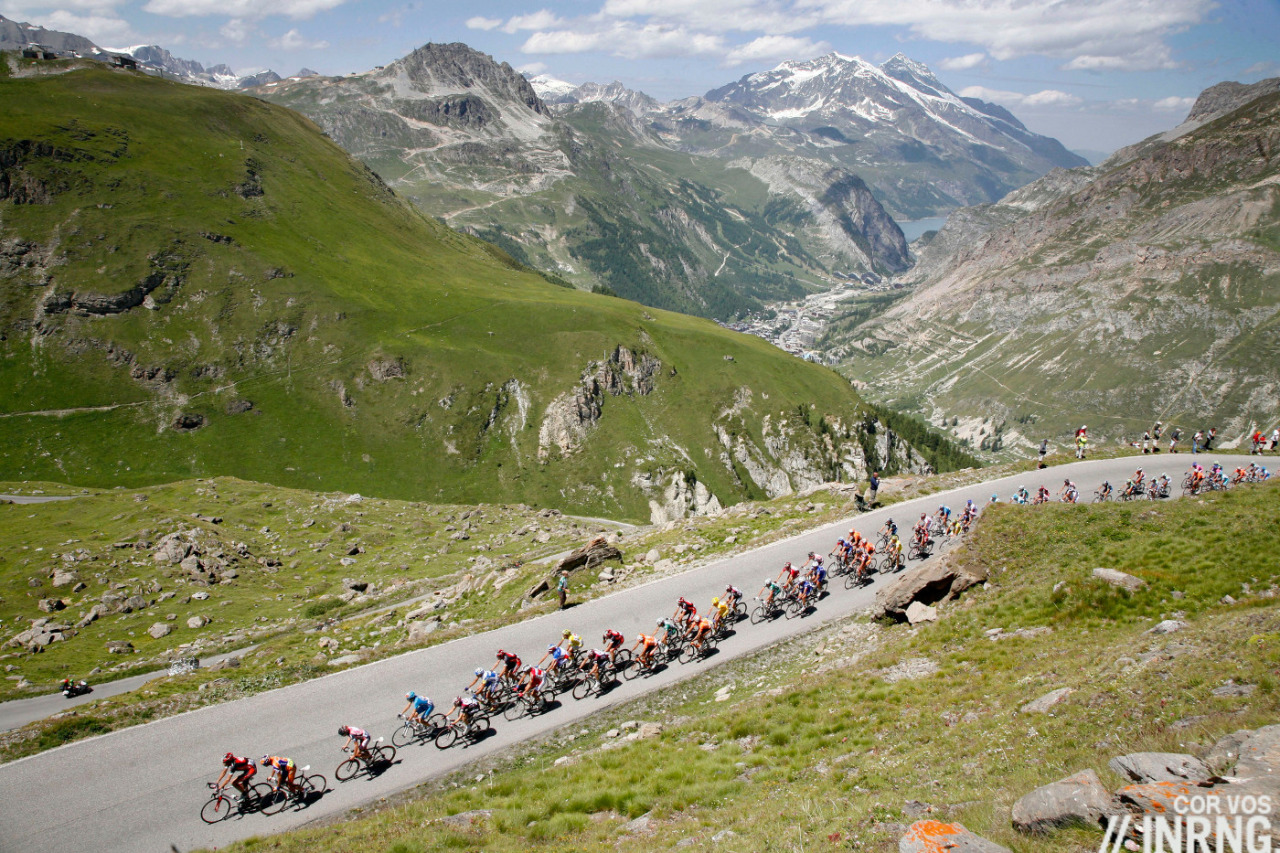 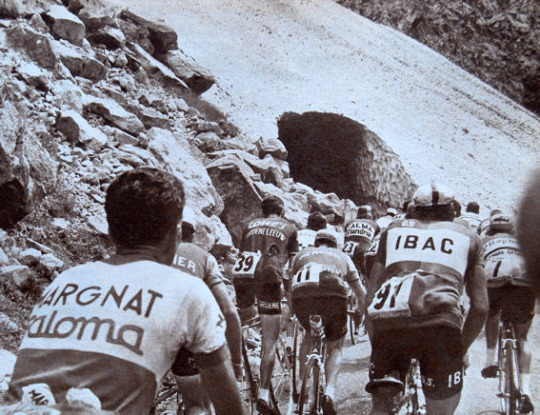 Snow is there all year and in 1963 there was so much that they had to dig tunnels through the ice. Not trenches but a whole tunnel as the images show. 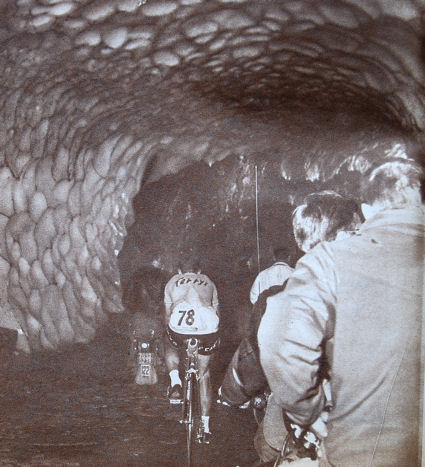 Claudio Chiapucci’s 1992 raid to Sestriere is the stuff of legend, in more ways than one given the rise of EPO. 2007 saw Colombian Mauricio Soler go “loco” over the climb with an early attack. He joined a large group on the Iseran and attacked them later to win the stage solo.

The Future: there’s been talk of a summit finish in the Tour de France. Logistically it’s fine given the large open space at the top. It would be a grand gesture but the danger is the reality wouldn’t match up to heightened expectations. The Iseran is a long steady climb, a study in pacing rather than ambush country.

The Length: one of the hidden aspects that makes the Hour Record so hard is the constant effort, there’s no chance to relax. It’s a similar story climbing the Iseran, it is uphill for 48km meaning a near constant load. Sure you can back off in a few places and you won’t be on a fixed gear but it does mean climbing for two or three hours, perhaps more. There is a small descent on the upper section that most profiles don’t show.

The Altitude: Val d’Isère is one of the few places in mainland Europe suitable for altitude training camps but chances are you won’t spend weeks acclimatizing. Climb the Iseran and you’ve got 14km at 2,000m above sea level or higher and you’ll notice it. You’ll be slower in the “thinner” the air, but what really suffers is your sprint or attack, you can handle a short anaerobic burst but you’ll pay cash for the recovery. The trick is to avoid sharp efforts: if you must drop a friend or rival do it gradually or better still trick them into accelerating hard so you can pass them while they’re asphyxiated. 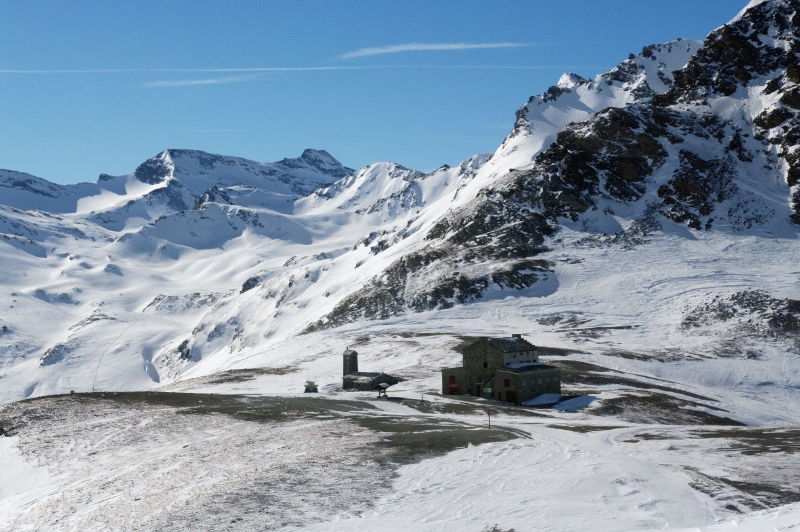 When to ride: it opens in May or June and closes in October. If you’re in the area for few days pick the right day with warm weather and clear blue skies because if the weather turns nasty it can be a long ride back.

Cheat? Ride and you’ll be overtaken by plenty of cars, some with bikes inside or on the roof. Many drive to Val d’Isère to experience the climb’s upper slopes, skipping the first 30km. Do these people fast-forward through films too? There is some wisdom in escaping the earlier section. Your choice but what if you start a habit, that you drive to Valloire for the Galibier and park in Trafoi for the Stelvio, “just to save time”?

Travel and Access: the start in Bourg St. Maurice offers plenty for a long weekend’s riding with the Petit St Bernard, the Cormet de Roseland, La Plagne and Les Arcs all close by. But a week here might get repetitive, you’d do well to cross over the Iseran to the Maurienne valley where you can tackle the Iseran from the other side, a more scenic route and have access to many other climbs like the Galibier, Mont Cenis, Glandon and more.