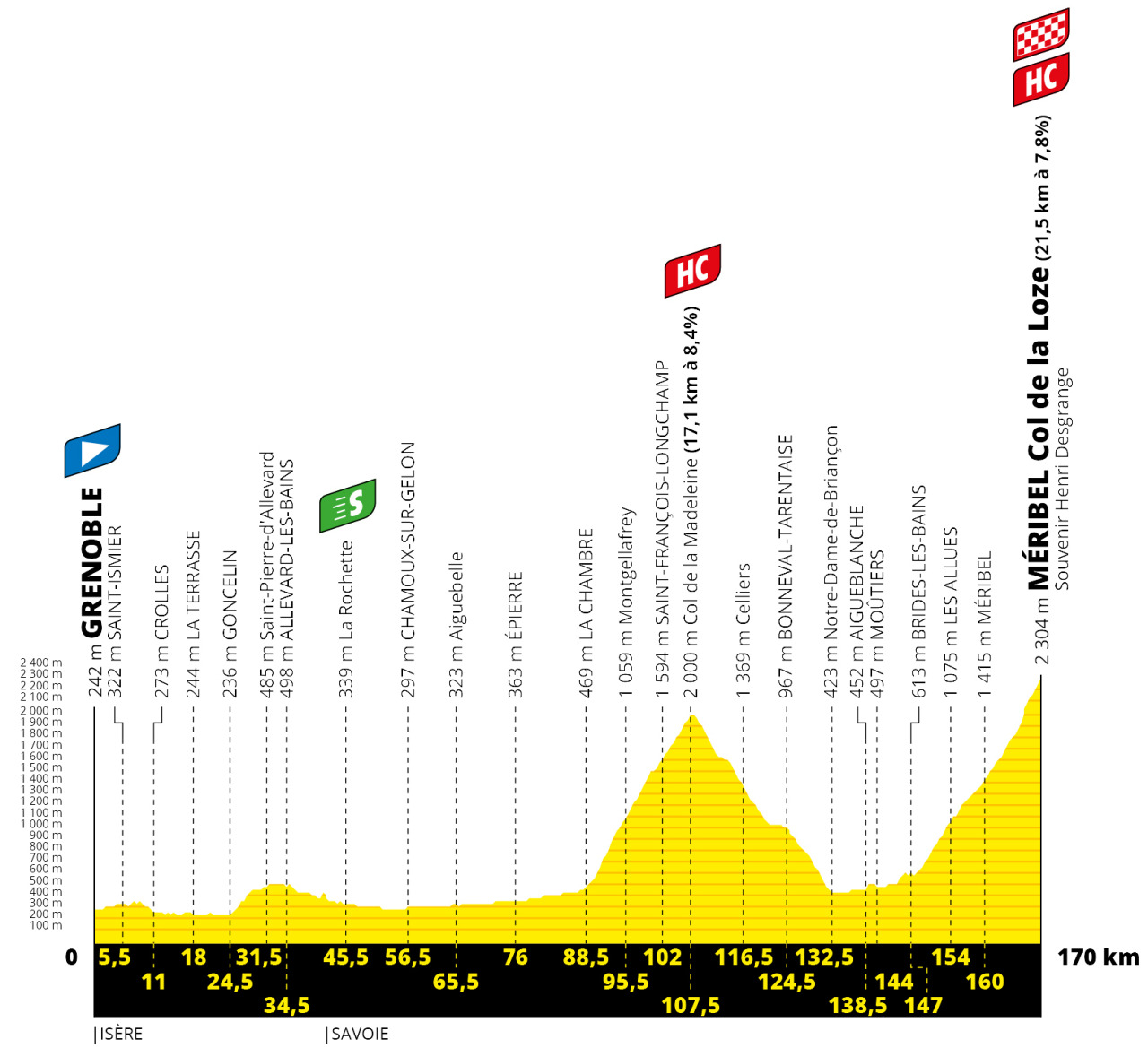 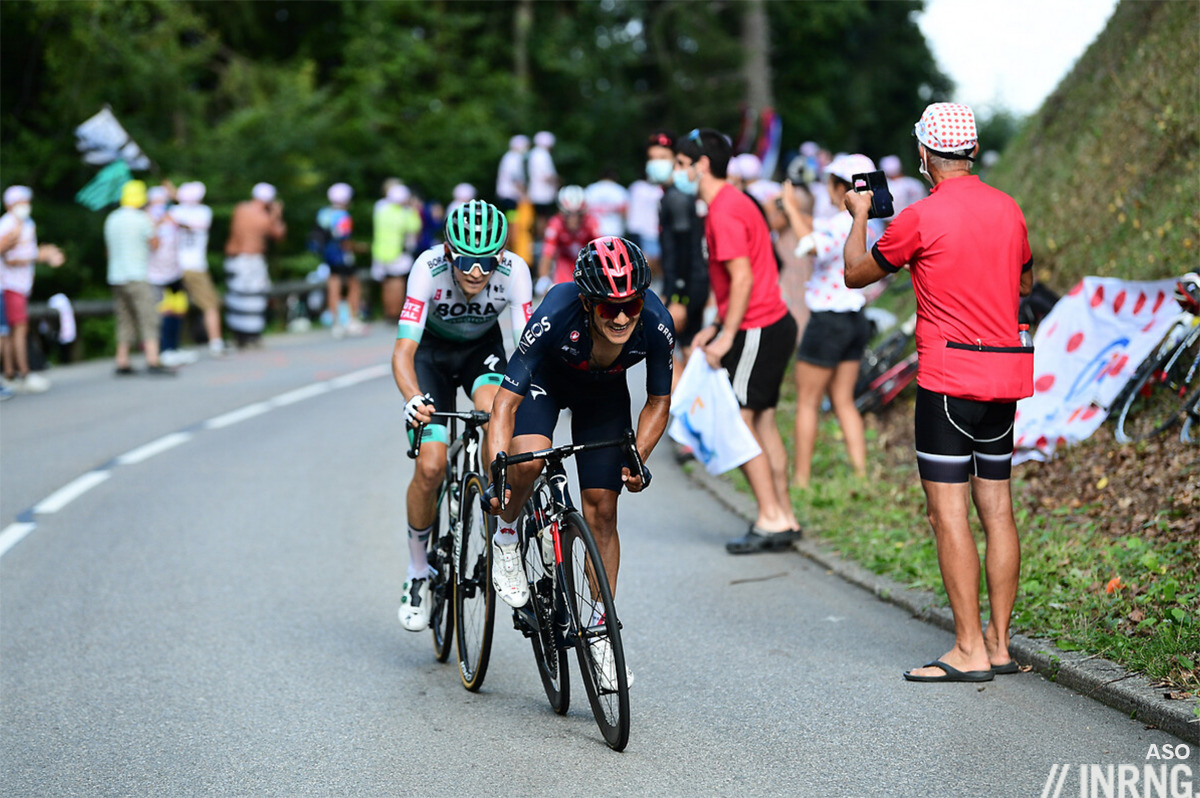 Kämna: 13 years ago a 10 year old boy got a racing bike as gift so he could join his father and older brother in their hobby and the family went on holiday to France that year where little Lennard managed to climb Alpe d’Huez. Now he’s winning Tour stages. It might sound sudden but before the Tour win came a junior worlds title, a Euro U23 TT title and more, perhaps too much as he took a break from the sport two years ago. He’s just turned 24 and we’re going to hear a lot more from him in the coming years.

The day’s first breakaway was full of star names but got pulled back. Another move formed and this time it managed to stay away, indeed Jumbo-Visma were in no hurry to chase. Pierre Rolland started collecting mountains points, launching from far out because he feared having to sprint. On the long climb to Saint-Nizier Ineos got to work, first a move from Andrew Amador and then Richard Carapaz who was joined by Sébastian Reichenbach, Julian Alaphilippe and Lennard Kämna. Carapaz kept up the attacks and had the other three grimacing but it left the Ecuadorian tired. Kämna attacked over the top of the climb, got a gap and the former world junior TT and European U23 TT champion got to work and took the stage win Bora-Hansgrohe have been hunting for.

Behind it was status quo among the GC contenders. Pogačar launched a late attack but Jumbo-Visma had him marked. Miguel Angel Lopez tried a counter punch and if he got some daylight it wasn’t enough to get even one second back on his rivals. Egan Bernal was dropped, his loss on the Grand Colombier was neither a jours sans to use the French term, nor what Italians call a “sugar crisis”, instead his back is problematic and he was pedalling like Thibaut Pinot, standing on the pedals and trying to rotate his pelvis as if to help loosen things up.

The Route: more déjà vu with the stage start in Grenoble quickly picking up the route of Stage 3 of the Critérium du Dauphiné and copying it up and over the Col de Madeleine. After 25km there’s the unmarked climb up the side of the valley, 6km at 4% but steeper at the start. A chance for Sagan to pressure Bennett again? Sure but even if Sagan wins the intermediate sprint – he’s yet to win one all tour – he’s still got a big deficit to close. Then it’s a big dash around the valley floor to the foot of the Col de Madeleine. 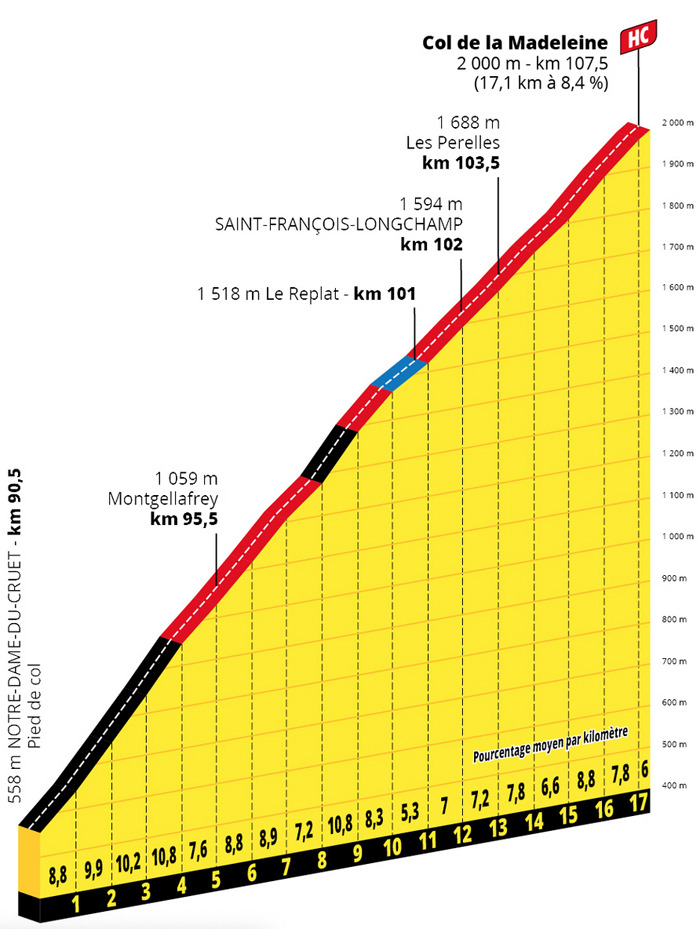 Again this is the same road as used in the Dauphiné, it’s not the main road but via Montgellafrey and has a steeper start but the defining characteristic is the length, 17km. The descent is similar, it’s long and with more bends on the way down than up. Then comes 15km along the valley, short for a rider sat tight in the bunch towed by Jumbo-Visma, longer for a lone rider up the road. 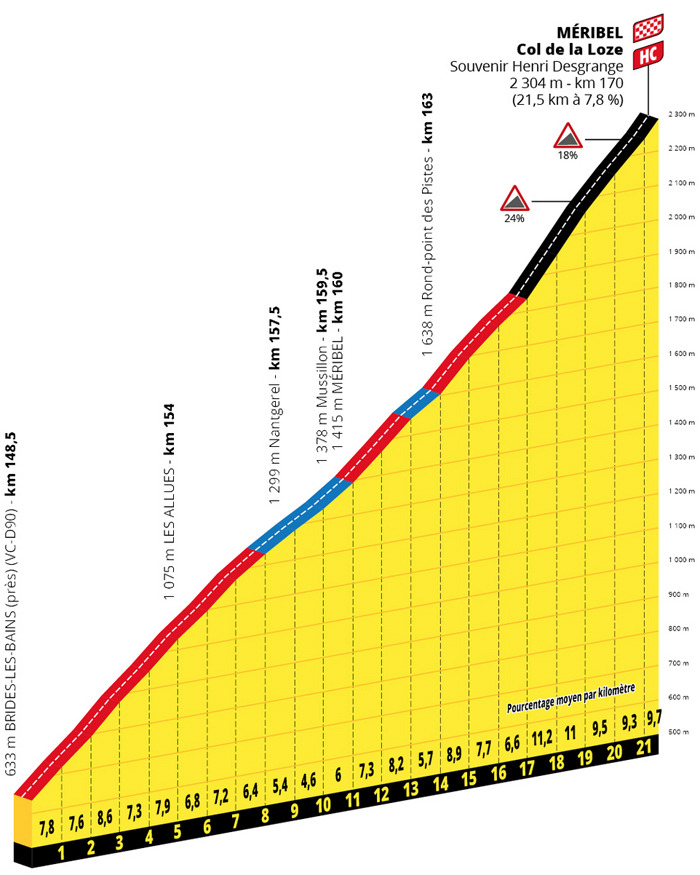 The Finish: a 21km climb (full details here) and in two parts, the first 14km to the ski resort of Méribel is hard going with plenty of 7-% sections from the start but all on a classic ski station road, it’s wide and engineered. Once above of Méribel everything changes as the race switches onto a cycle path that was created in 2019 and is unlike anything else. The TV cameras never capture the slope but you’ll see it’s narrow. Above all it’s irregular, at first it’s manageable but there’s a bend that turns into the woods and things get feral with a slope keeps changing, 20% for 50m, then flat, 12%, then a 6% breather and so on and it keeps doing this, the average gradient per kilometre tells us little. The path emerges out of the woods with a series of tight hairpins and the road becomes less erratic. The profile above misses the brief descent within the final 2km and then then it kicks up again with an 18% wall before the line. Today’s summit finish has both the usual 10-6-4 time bonuses but also double points for the mountains competition

The Contenders: Jumbo-Visma will be only too happy for a breakaway to go away, the Dutch team don’t want to risk a repeat of the Grand Colombier where Tadej Pogačar took a 10 second time bonus with his stage win. Half the bunch will know this and the question is whether a move can form early enough with the right composition of riders in order to start building a lead because they’ll need several minutes lead for the last climb. Today’s course is for the climbers, think Marc Soler (Movistar), Dani Martinez and Hugh Carthy (EF Pro Cycling), Mikel Nieve and Esteban Chaves (Mitchelton-Scott) and Dan Martin (Israel). All of these are riders suited to the finish but the first names bring guarantees about the form, the latter ones less so.

Pierre Rolland (B&B Hotels-Vital Concept) is going well but the stage win is a big ask, if he can get in the break today the Madeleine is ideal for him to take points for the mountains competition.

Otherwise it’s difficult to look past Tadej Pogačar (UAE Emirates) and Primož Roglič (Jumbo-Visma) but how to pick between them? Pogačar won on the Grand Colombier, Roglič was superior on the Pas de Peyrol. The irregular sections of the Col de la Loze make life tough for Jumbo-Visma to control things but harder, not impossible.

Weather: warm and sunny, 26°C but with the outside chance of a thunderstorm, a downpour.

TV: live coverage from the start at 12.15pm CEST to the finish forecast around 5.20pm Euro time. The Madeleine starts around 2.40pm and the final climb around 4.20pm.