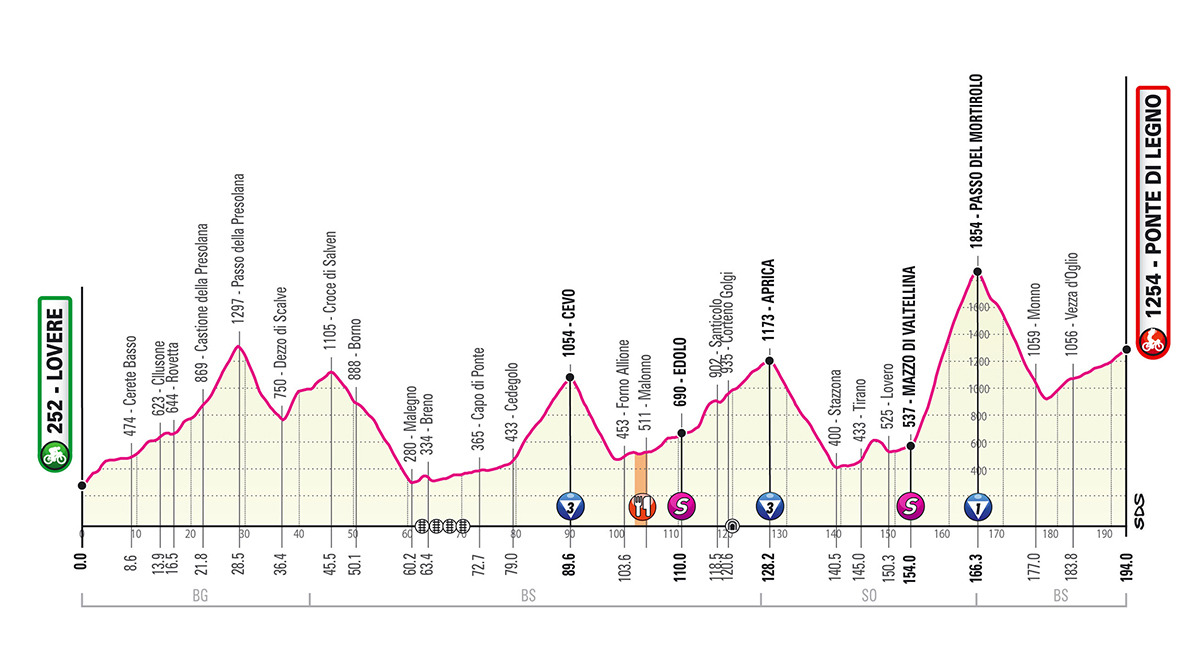 No Passo Gavia because of the snow, but there’s an uphill start, the Mortirolo and over 5,000m of vertical gain and it all makes for a livelier stage.

The Route: 194km north into the Alps. The race could take the main valley road but instead heads into the hills for the Passo della Presolana and this should make for a lively start to the stage as it’s an obvious launchpad for a breakaway, it’s followed by a quick descent that for the most part has good visibility and then straight onto the Croce di Salven, a climb in two parts with a level section in between where the first section is steepest. The descent a main road.

The climb to Cevo is similar to the last, a steep start and then a flat landing before climbing up again only this time the descent is wilder as they drop down to the valley road. Here it’s a steady climb to Aprica and then a descent in two parts, the first on the main road and then it’s onto a side road, a short cut to the valley. 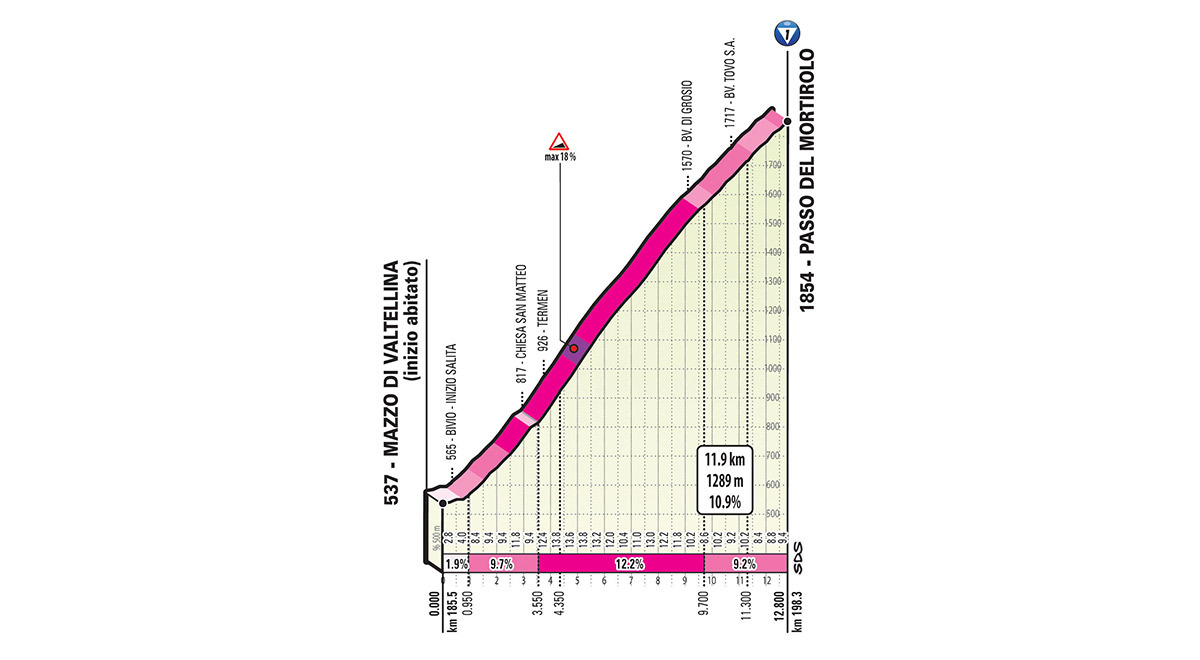 The Mortirolo is one of the hardest climbs in Europe. There are different ways up but this is the classic Giro route. Ironically the Mortirolo was only added to the Giro because of snow, back in 1988 the Gavia was covered in snow and a local ski coach suggested the race use the Mortirolo instead. They rode the Gavia much to the agony of those in the race but the race came in 1990. Despite being a relatively new climb it’s become a reference, a point of comparison. It’s hard for two reasons, first because it’s 11.9km at 10.9% but also because of the irregularity, unlike Saturday’s Colle San Carlo, here the slope keeps changing making it hard to get into a rhythm, it confounds those who try to ride to numbers. The descent is on the easier side to climb but still difficult to descend in a race situation, it’s wooded and full of blind bends. 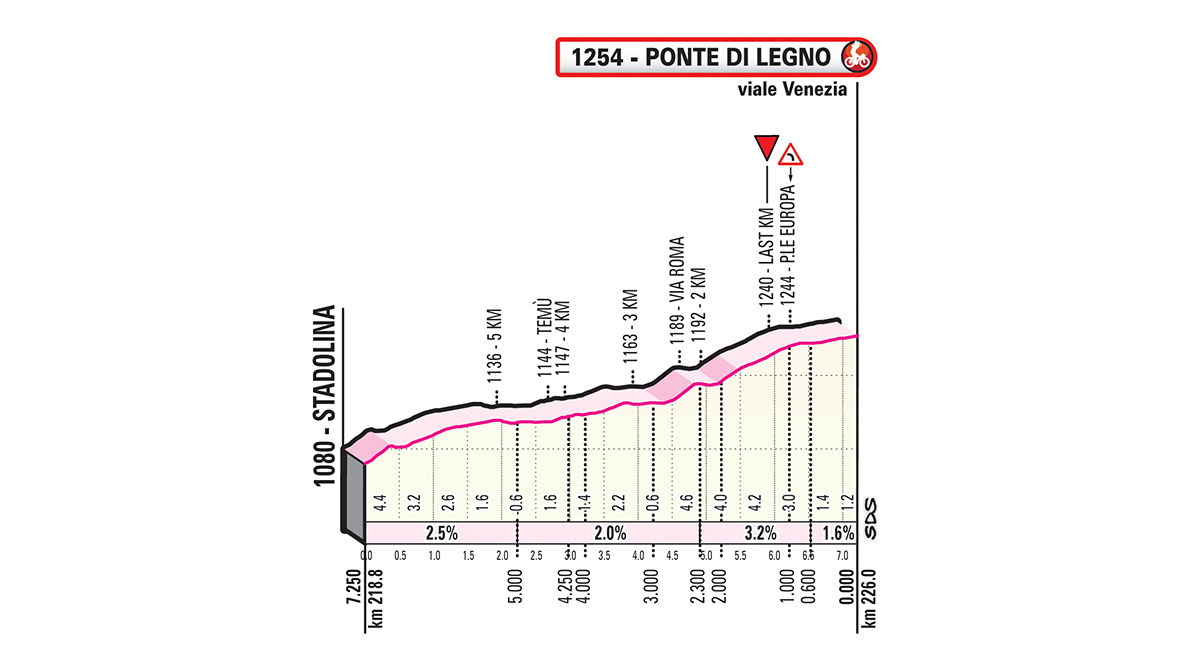 The Finish: a drag up the valley road and then a finish in town on a flat road.

The Contenders: the breakaways have been having a good time of it and today should suit them again. The GC teams will want to place riders in the breakaway because once over the top of the Mortirolo there’s 27km to the finish on a valley road that drags, not the place for a lone climber to be dangling in the wind alone, but if they make an attack on the Mortirolo and then pick up a team mate then their chance of staying away from their rivals increases.

Astana could set a hard pace all day but they’re more likely to try and get riders in the move. The dilemma for Jumbo-Visma is whether to do this in order to try and provide Primož Roglič with help up the road or do they try to stay with him until the early slopes of the Mortirolo?

Richard Carapaz (Movistar) is the safe pick, he’s quick in a sprint and a win here would see him assume a psychological grip on the race.

Vincenzo Nibali (Bahrain-Merida) is having a good Giro and while he might wait for others to crack, he can come in with a group today and take the sprint.

Simon Yates (Mitchelton-Scott) signature move is an attack on a climb and then going solo to the win. Easier said than done but he’s pulled it off before and now has a little room for maneuver as if he jumps he’s not an immediate threat. He’s also handy in a sprint from a group.

Primož Roglič (Jumbo-Visma) needs a result, he’s been losing time to rivals and suffering setbacks and a win today and the time bonus would be handy but it’s getting increasingly hard to see.

Who can win from the breakaway? Go through the startlist and pick those who aren’t on GC duty either for themselves or a team mate, who can cope with the Mortirolo and then win from and sprint and… there are not many names left. Tanel Kangert (EF Education First), Chris Hamilton (Team Sunweb), Fausto Masnada and Matteo Cattaneo (Androni-Sidermec) come to mind but these are not regular winners. Giulio Ciccone could be on duty for Trek-Segafredo team mate Bauke Mollema but gets the nod again.

Weather: grey, wet and a top temperature of 13°C, colder at the climbs.

TV: the finish is forecast for 5.15pm CEST / Euro time. They start the Mortirolo around 3.50pm.