Is it the name? Mortirolo sounds like morte, death in Italian, and certainly more appropriate than the foppish Passo della Foppa name that is also given to the pass. A relentless climb and one of the few ascents to become famous without being a “summit” finish. Here’s a closer look.

The Route: there are many different ways up but the classic route starts in Mazzo di Valtellina. Even here there are different roads heading uphill but the “official” start is on Via Valle and you’ll see the Passo Mortirolo sign saying if the pass is open, as well as another just behind it saying Passo della Foppa and with a pink “Salita del Giro d’Italia” strapline to guide you. It is 11.3km long at an average of 10.9%.

The Feel: ride through Mazzo di Valtellina and it’s more about taking the right route than starting any savage slope, there are several ways up the mountains but chances are you want to do the official Giro one. Use the moment in town to eat and drink because you won’t feel like it once you’re on the hard slopes.

Mazzo is farming-functional rather than Alpine charm and this sets the tone for what is to come. From the early slopes this is not a thing of beauty although the first ramp offers nice views of the valley below. Suddenly there’s a hairpin bend with a bench on the outside, as it placed for the unready to quit. The road funnels into the bend and emerges into something much narrower and then it’s 10% for some time as it enters the woodland. If there’s a heatwave on do this in the morning to enjoy the cool and shade. In time you’ll pass a chapel on the right and this is where the road really kicks up, those suffering already might as well enter the chapel for a breather and to pray for fresh legs. 18% says the profile and for once it’s not an RCS exaggeration taken on the inside of a hairpin bend, it’s a sustained ramp in a straight line. It’s the Mur de Huy only you’ve got nine kilometres to go. Onwards you grind through the woodland which occasionally breaks for pastures. The road is a patchwork of new tarmac sections, as if the Giro has helped to resurface the road. Look closely and the surface seems to be scratched: is this the passage of snow ploughs in the winter or motorbike riders grinding footpegs? 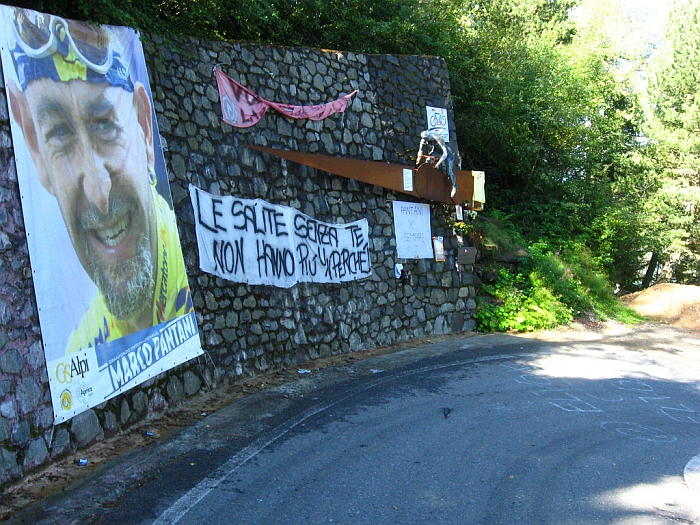 Round a bend and the Pantani memorial on the next bend stands out high above you, heightening the vertical impression of the climb; there’s room on the side of the road to stop and look and the same space allows you five metres to clip back in and get enough momentum to start climbing again. The whole road up is a monument to cycling with painted graffiti all the way. With one kilometre to go the road emerges from the woodland into the open pastures where cows roam free, their bells ringing

It’s not scenic, the road has a man-made feel rather than a route tracing a natural passage over the mountain. It’s lined by large stone and cement walls on one side. Nature is trying to reclaim them with a covering of moss and sprouting ferns but it still feels artificial. Not that it’s a masterpiece of engineering the slope is highly irregular, 8% for 50m then 10% and you round a bend to find 15%.

The top of the pass is unremarkable, a sign marks the spot but nothing dramatic, just space to enjoy the views and recover for a minute before the descent. Go to Monno and the road isn’t as wild, a safer way down than doubling back. It’s very quiet because it’s so hard. The pass offers a short cut between two valleys but they intersect soon after and all motorists will take the longer route of about 45km on the easy valley road rather than going up and down 25km, a saving in distance only.

The hardest climb? There’s always going to be something harder and armed (legged?) with the right gears this is very difficult but accessible, just. It’s no worse than Monte Zoncolan. What’s striking is the intensity and violence of the effort. Ride the other famous climbs in this area and you’ll get that diesel climbing pedal stroke where you sit and spin in control for an hour at a time. The Mortirolo is very different, you become a victim of the slope and forced to react to what’s around every corner. But don’t split the difference, both are tough climbs and you’ll need low gears for both.

Gears: it’s said Marco Pantani sneered at those who used a 25 sprocket and rode up with 39×24 but today’s pros have no qualms about a 25 sprocket, some will even use 34×29. If you’re going, remember your lowest gear should be an emergency option for the steep bit when you’re on a bad day rather than your default “I can get away with that” climbing ratio where you ride up with the chain full left from start to finish.

“The Mortirolo was a smugglers road and the smugglers take care of their roads”
– Mario Cotelli, ex-Italian national ski coach

The History: it snowed on on the Gavia in 1988 and route was under threat. “Take the Mortirolo” said Mario Cotelli, a ski coach, to Giro boss Carmine Castellano. The Giro made a note and ploughed up the Gavia for an anthological stage. But Castellano was intrigued, he’d already drawn the 1989 route but slotted it in in for 1990, the first of 11 crossings. The route has varied, first on the eastern side from Monno but this was changed after the climbers went up so fast but struggled with the descent to Mazzo. In 2012 they Giro climbed up from Tovo on a newly paved section of road but most often it’s via the classic route marked “Giro” route from Mazzo. The Mortirolo record from this side is 42.40, set in 1996, held jointly by Ivan Gotti and the pharmaceutical industry.

It was the springboard to Franco Choccioli’s 1990 Giro win but really entered the collective memory with Marco Pantani’s 1994 win when he left Miguel Indurain and Evgeni Berzin. There’s a Pantani memorial on the climb, a large piece of ironwork mounted on a wall holding the mountain back from the road, look closely and people have scratched their names and wishes into the wall itself. Contador is no stranger to the climb having ridden up in pink on his way to overall victory in 2008 and keeping the reptilious Riccardo Riccò at bay. 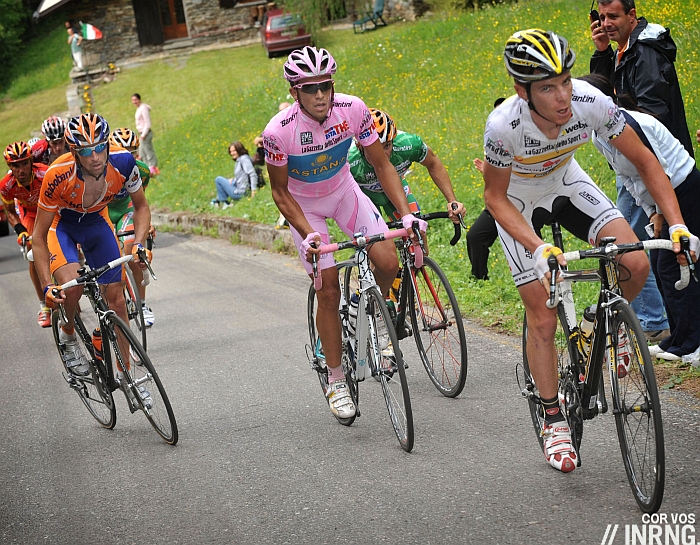 Travel and Access: this is just one of many climbs in the area. Chances are most visitors come for the Passo Stelvio and the other nearby giants of the Alps and then reserve a day to tackle the Mortirolo. Places like Bormio and Aprica offer obvious bases and accessible via road and rail, think about staying in a small village if you want somewhere more peaceful.

Remember spring comes slowly to the Alps and the Giro is often pushing the limits weather-wise. You might get a good day in April for the Mortirolo but the big passes nearby are normally closed for winter until mid-May so visit between June and the end of September.