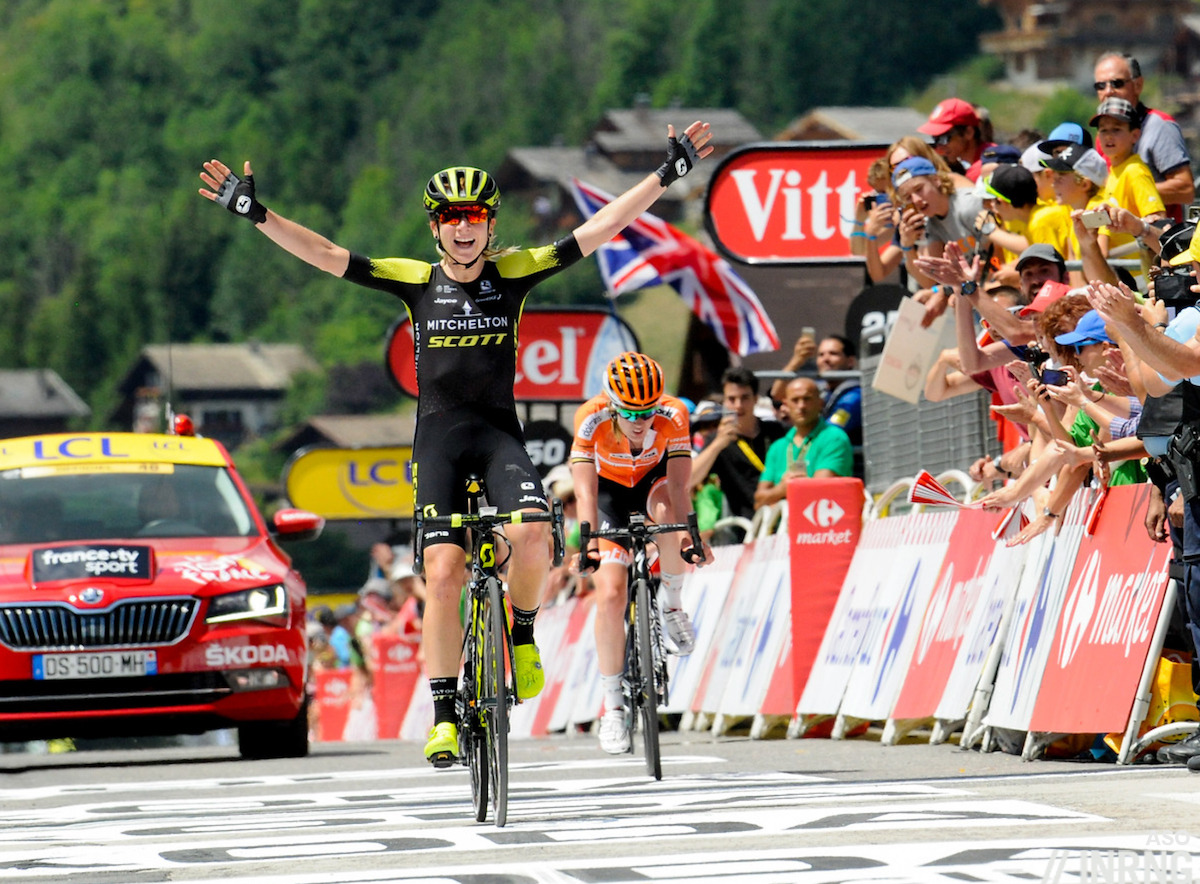 In the fourth of five picks, here’s La Course which provided action, attacks and a twist in the final.

So much of the coverage of women’s racing is about the coverage of women’s racing. Heaven knows there are problems but it’s important to remember it’s a sport too and for once here was a race live on TV with a spectacular course. After a start in Annecy the twin climbs of the Col de Romme and the Col de la Colombière were the obvious points to decide the race before a descent to the finish in Grand Bornand.

The course was a truncated version of the men’s race, it skipped the Col de Glières and its gravel portion, a frustration when the route was announced but with hindsight maybe this turned out for the better as it meant they skipped a selective climb that could have thinned the peloton down too soon. Maybe not?

If they avoided the plateau, they were still in the Alps and the shortcut involved climbing and by the time an early break went clear several others were dropped, no processional start here. The Cervélo-Bigla team had a plan and sent sprinter Lotta Lepistö across the early breakaway, not so much of long range bid but more of a relay. The move of five reached the Col de Romme with a lead under 90 seconds, far from enough.

Cecilie Uttrup Ludwig (Cervélo-Bigla) put in the first big move from what was left of the peloton and rode away, quickly passing the earlier breakaway riders and building up a lead of a minute and suddenly in contention. Behind Amanda Spratt (Mitchelton-Scott) put in an attack and this prompted a counter move soon after by Anna van der Breggen (Boels-Dolmans), Ashleigh Moolman Pasio (Cervélo-Bigla) and Annemiek van Vleuten (Mitchelton-Scott) formed with Lucina Brand (Team Sunweb) just out of the picture. They chased down Uttrup Ludwig.

If many climbs have hairpins, the upper section of the Col de la Colombière is a long straight hugging the side of the mountain and almost an optical illusion for the way the top of the pass looks within reach when it’s kilometres away. It’s gruelling but all the better for a small group of riders to race and the viewer can constantly measure the distance between the riders. Moolman Pasio attacked just as they caught her team mate, a textbook move but the South African rider could get away and was countered. Now the race was down to two and van der Breggen attacked in the final kilometre of the climb and held a slender lead of three seconds at the pass. Try as she might Van Vleuten couldn’t close it but she could limit it and during the long descent the gap was never more than a few seconds.

But that gap persisted and as they turned back up the road to the finish there was tension but a creeping sense of resignation as if van Vleuten’s effort wasn’t enough. The suspense was such that there were tweets announcing van der Breggen’s win, as if they were sent when people caught sight of her in the finishing straight. Only for a slight rise before the line to tilt the balance and with 25 metres to go van Vleuten surged past.

It wasn’t a great women’s race, it was a great race. Scenic too. A gradual process of elimination and if there were team tactics from Cervélo-Bigla and Mitchelton-Scott, these teams didn’t and couldn’t impose a curfew on the race. The Col de Romme thinned things down – as perhaps did many tired legs from those who’d just finished the Giro Rosa and made the journey in time – and then the best riders left took turns to attack on the final climb and the suspense remained on the descent to the point where the result began to look inevitable but was flipped in the final metres.

Cecilie Uttrup Ludwig’s post-race interview was a joy, the sheer pleasure of taking part was evident a contrast with the men’s Tour when words are often weighed to their last gram. 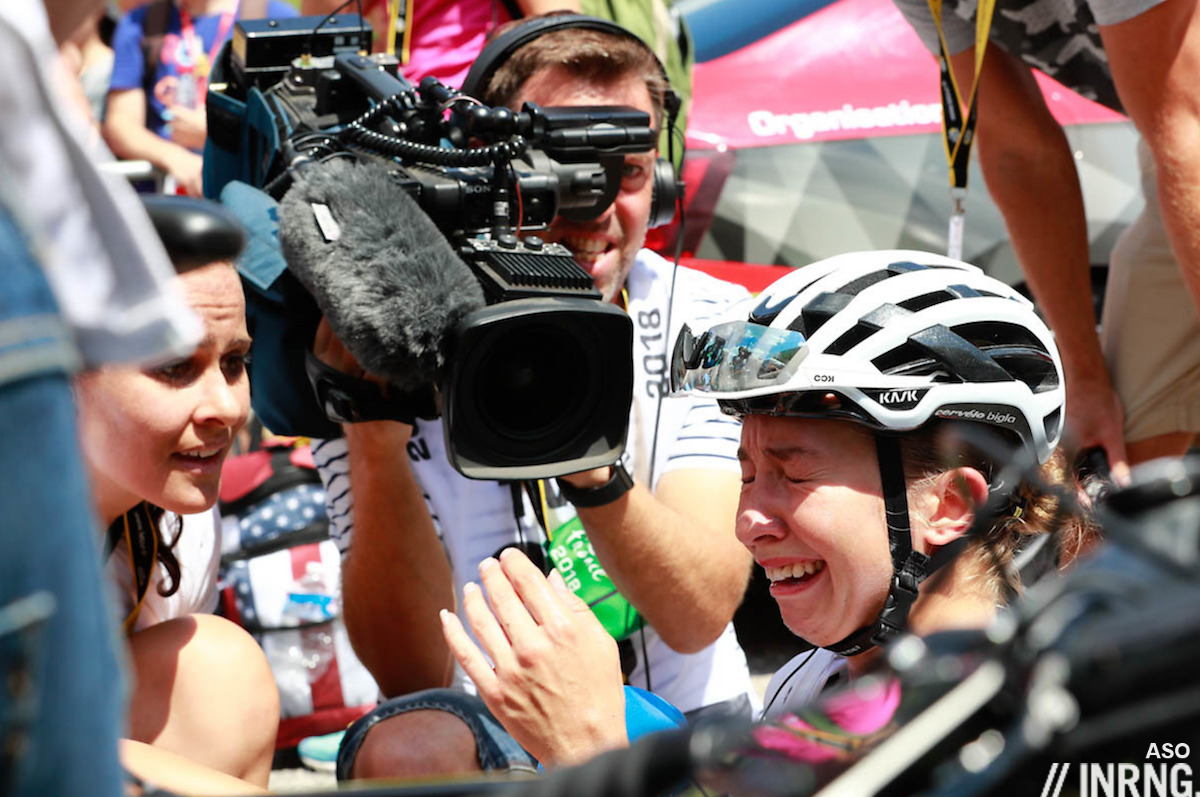 A women’s race in the mountains that’s live on TV ought to be a default highlight of the calendar, just like a mountain stage of the Giro or Tour. The Giro Rosa may visit the mountains but you can’t watch it live and next year’s La Course is a circuit race outside Pau on the morning of the men’s time trial, a fine day out for roadside picnickers but not the stuff of dreams, nor even the glamour that the Champs Elysées criterium used to offer sponsors and VIPs. So the chance to see the women racing in the high mountains turns out to have been a rarity.

While we wait for a women’s stage race to appear – it’s in the works, 2017’s two-day Izoard-Marseille was as much a logistical test as a two day race – a question: if this one day race came down to a duel, then would a stage race risk extend and entrench this hierarchy? Put another way this was an exciting one day race but make a stage race out of it and it may not be as sparkling as riders measure their efforts accordingly, see the men’s race when they were climbing the Colombière in a huddle. That would be a nice worry to have.

Next post: Sky Reaches The End of the Road