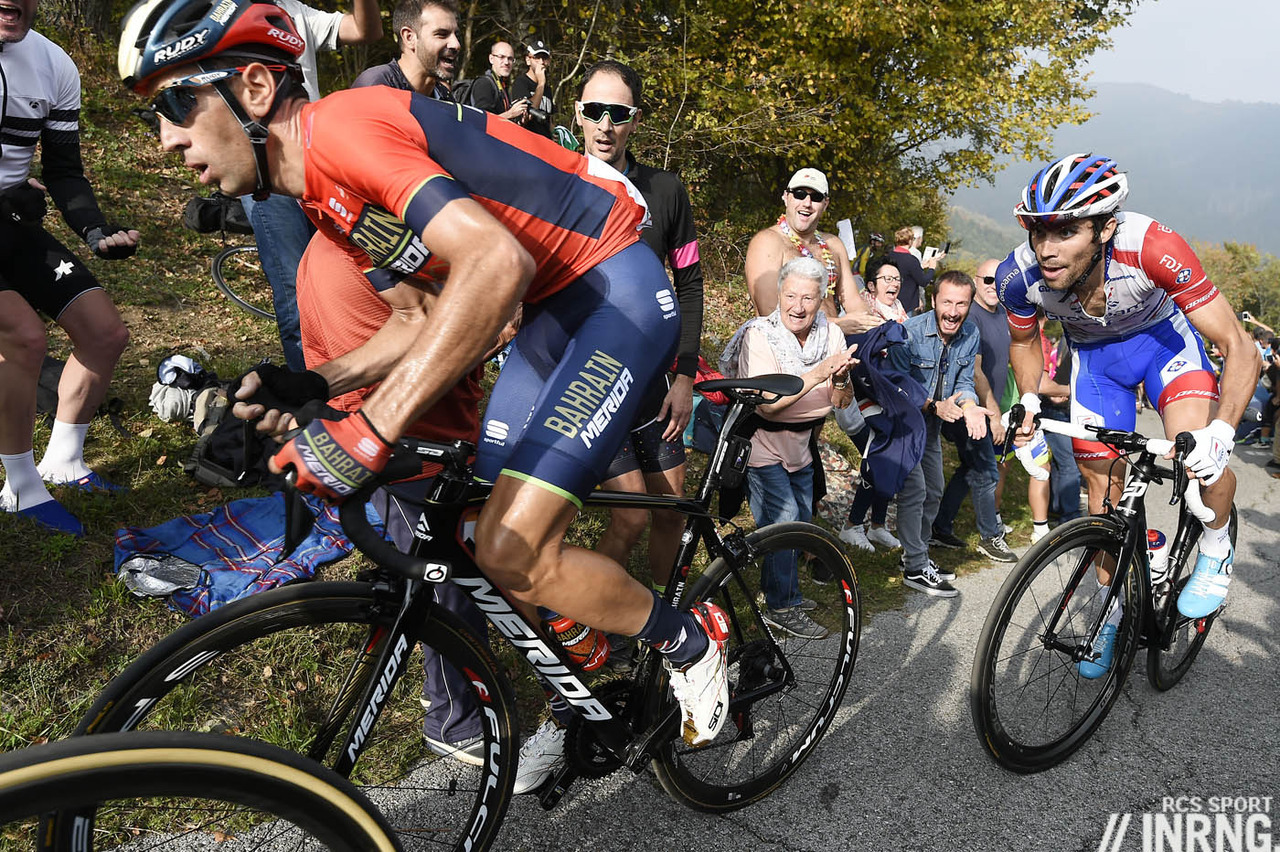 Suspense, revenge, reversal, renewal, the 2018 Lombardia had it all.

Lotto-Jumbo hit the race on the climb of the Sormano, a proper climb just to get to the start point of the infamous Muro di Sormano and its two kilometres at almost 16. The Dutch team lined out the field and Robert Gesink a booster rocket trying to send Primož Roglič into orbit. The Slovenian went clear and was hanging solo off the front of a very reduced group until Vincenzo Nibali attacked and Thibaut Pinot went with him and the pair surged past Roglič. All with 47.5km to. For Nibali this was a bold move but a good way to show himself after coming back from his Tour de France crash via a quiet Vuelta and discreet World Championships, why not provoke a move and see what happens? If he was caught he’d have tried and pleased the crowd. For Pinot the gamble was bigger, he’d been in excellent late season form to the point of lamenting missing out on a medal in the worlds because of team orders and had just won Milano-Torino. To go this far out was risky with such great form.

Roglič got back on during the descent but this took him several kilometres to manage and there was a trio leading the race. Only Egan Bernal was suddenly closing in, the Colombian had been with the chase group at 40 seconds but seemingly he surged across, presumably part fearless descending, part because the TV coverage had missed him until he was in range of the cameras pointed at the lead trio. Bernal didn’t link up though with the trio until after the descent and the effort of chasing on the flat cost him.

Still we had four riders in the lead and they only had 20 seconds on the chase group led by Education First-Drapac’s Dani Martinez, a comeback of sorts for him after he was one of several to have crashed hard a year ago. It was close but Alejandro Valverde was there and his presence surely put worried the others: why pull only to have him fly past in the final 200 metres? Similarly Bahrain-Merida had strength in numbers and were marking the move. 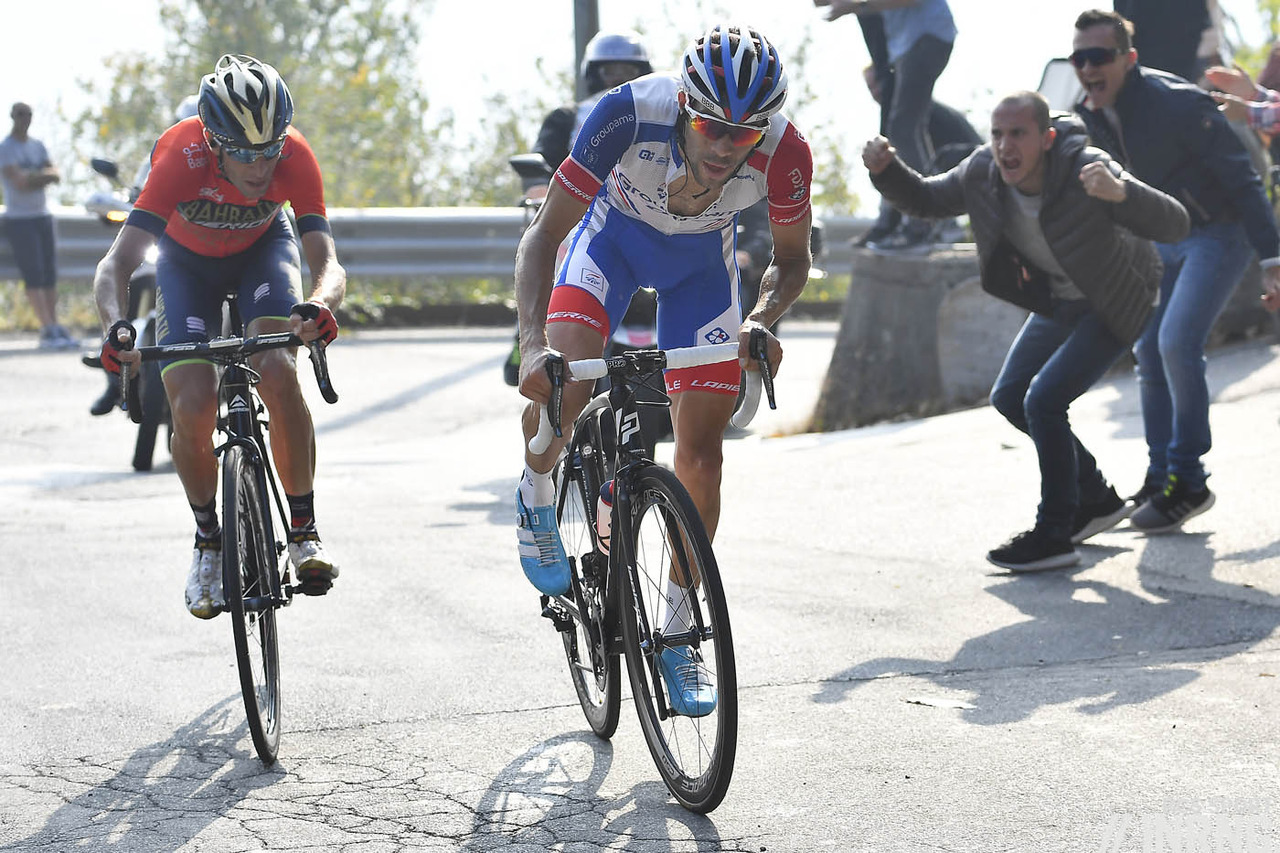 Onto the climb of Civiglio and right from the start Nibali and Pinot rode away, this wasn’t an attack, it was more Bernal and Roglič were cooked. Pinot and Nibali traded attacks and each move by Pinot saw Nibali pull level with the Frenchman. But this was spotted by Pinot as a bluff, as Nibali trying to show he could match anything but one more attack and Pinot was away.

Nibali wasn’t finished though. He was caught at the top of the Monte Olimpino climb but surged on the descent and got into a tuck while the others watched each other and so he stayed away for the podium. Dylan Teuns won the sprint for third place. 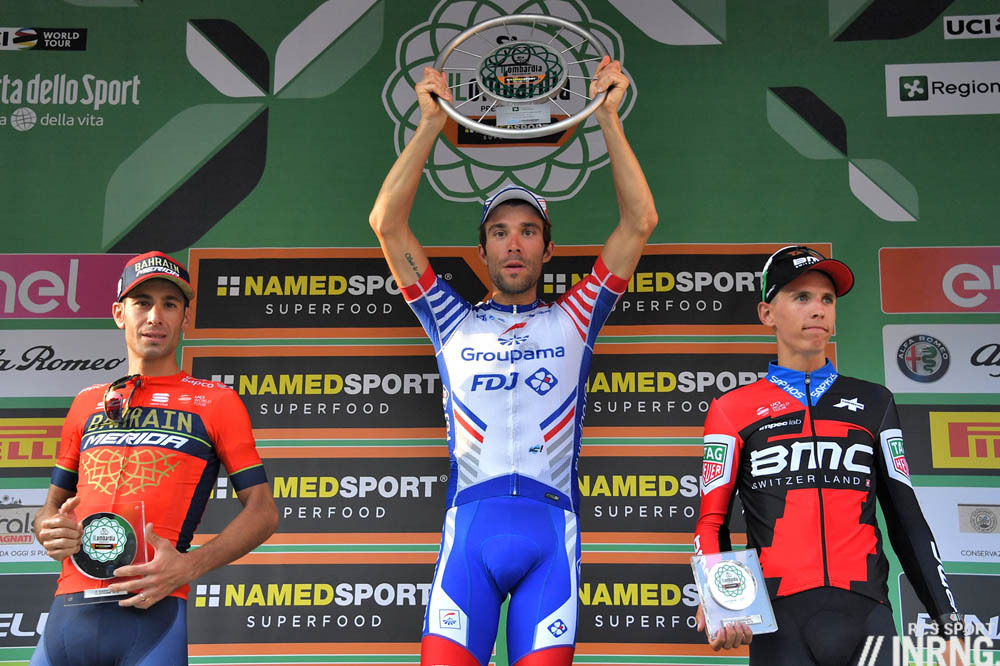 Why the highlight?
A long range attack, star names and beautiful roads lit in the autumnal sunshine. Peter Sagan made an audacious attack in Paris-Roubaix but the marking behind meant the suspense quickly fell out of the race as he and Silvan Dillier had a comfortable buffer on the chasers, it was a huge ride but not necessary gripping to watch. This time we had big names – grand tour contenders – on the move and the result was uncertain until late in the race, if Bernal had jumped across a 40 second gap then it was possible someone else could put in a big attack and bridge across too. This forced the leaders to race as hard as they could and in the end Pinot’s win was indisputable.

With hindsight
As practically the last race of the season there’s not much to unpick here. Nibali was again a catalyst, he didn’t win but he shook up the race. Lotto-Jumbo were the same too, they enlivened the Tour de France, especially with Robert Gesink to launch their leaders and did this again, if the results don’t show then it’s still worth celebrating their risk-taking tactics. Roglič didn’t get a result but impressed because he tried, after establishing himself as a Tour de France contender he could have coasted around the back end of 2018 but instead was gambling in Lombardia and has had a big season with wins in the Tour de Romandie and the Tour of the Basque Country, two of the hardest stage races to win.

Bernal impressed again. He’s been one of this blog’s riders to watch for 2018 – more on that soon – and having seen him in the Tour de France we knew he could cope with the set piece Alpine climbs but it was his descending that impressed this time, and so soon after a crash had left him severe injuries. It’s hard to see a weak point.

Pinot avenged his Giro collapse, and all on the Italian roads he loves so much. He’s finished the season on a winning note which might raise expectations and bring added pressure for 2018 but he seems able to detach himself from much of this.