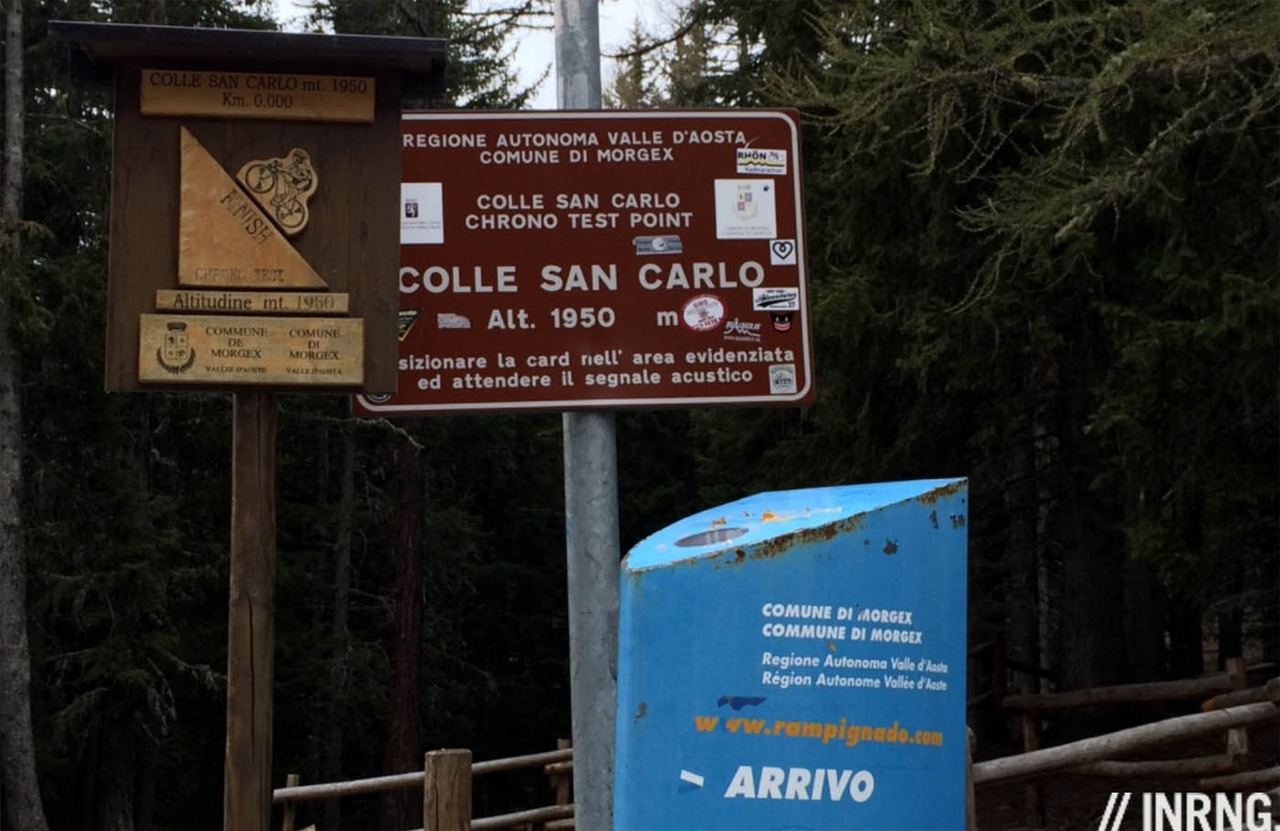 A challenging climb that’s part scenic detour, part gymnasium. Off the radar for years, it’s on the route of the 2019 Giro and a rival to the likes of the Mortirolo and Mont du Chat thanks to its relentless gradient and length. 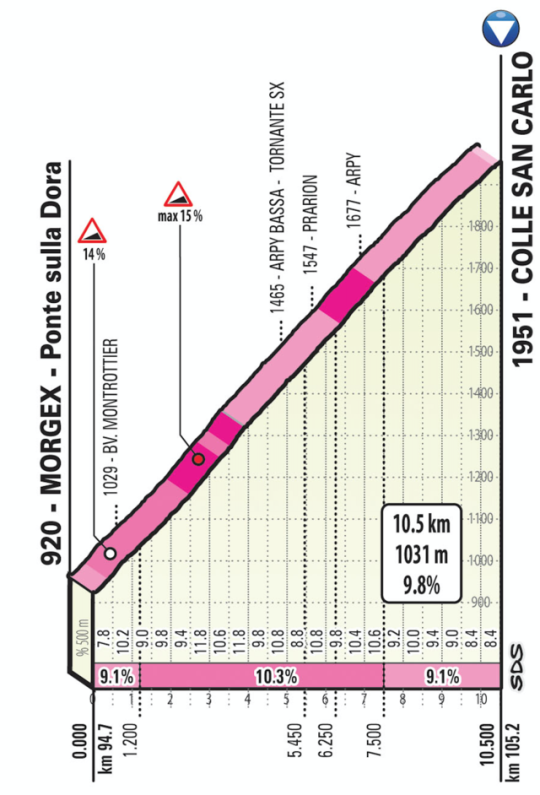 The Route: the SR39 starts in Morgex in the Aosta valley of Italy and climbs for 10.5km at an average of 9.8%. Top and tail the start and finish and you can have metric perfection of 10km at 10%. It’s also known as the Col d’Arpy.

The Feel: the start passes a mineral water bottling plant, a cue to take drink because it’ll be harder in 30 seconds. The road passes a few houses and apartment blocks, the road kicks up to 10% and disappears into woodland. The early slopes over 10% may tempt you into trying to overcome the gradient with force in the hope it’ll ease back but it never will. It’s relentlessly steep. 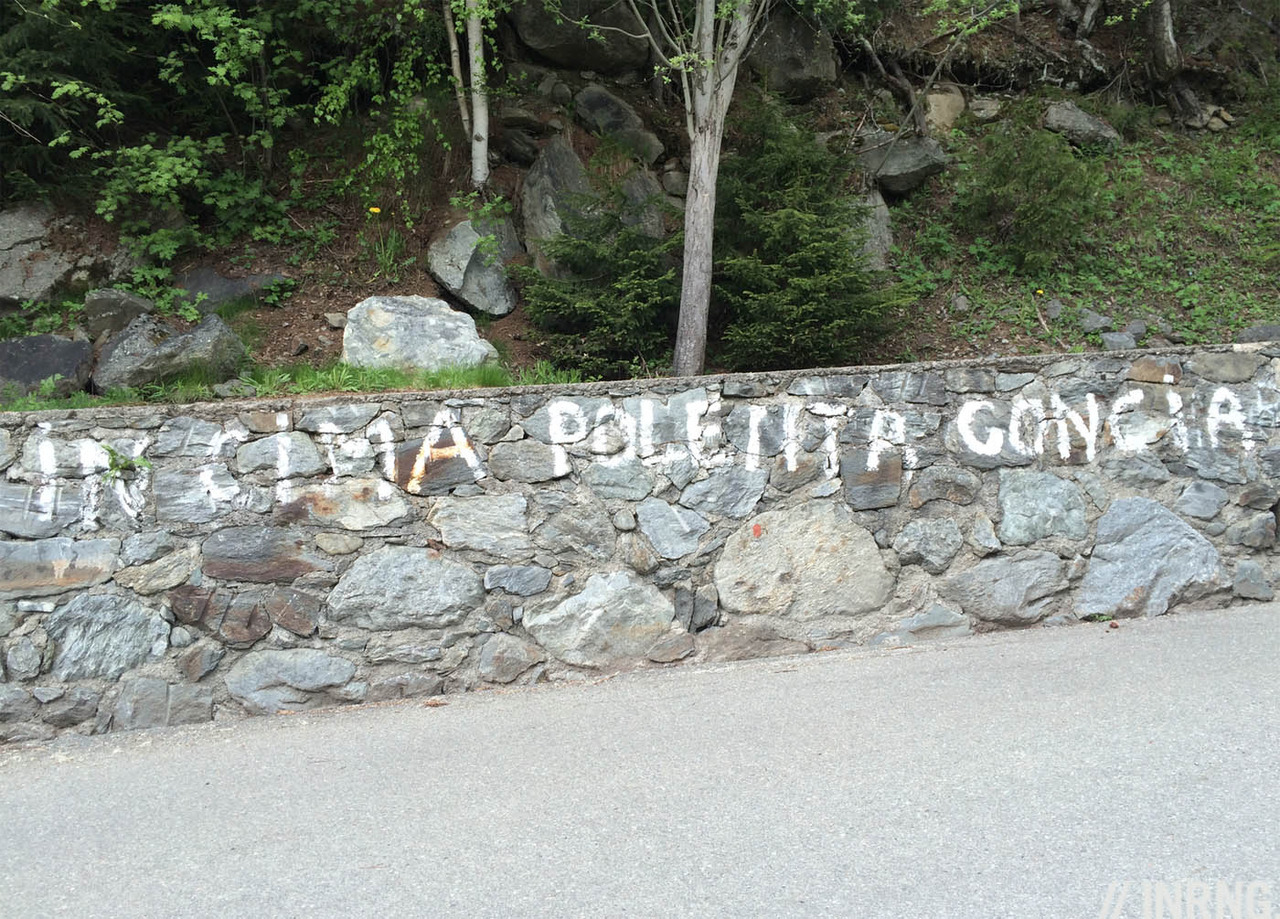 The road has its share of graffiti including “in cima polenta a concia” daubed on a wall, a local high fat version of polenta promised to those who reach the top. It twists up through woodland of larches and pines and the road and trees have a tidy feel, as if it’s a driveway to a swank golf course rather than a back road. The forest often blocks the views of the valley below but on a hot day the San Carlo stays cool and shaded in the mornings.

There’s almost no traffic and if you spot the village of Arpy on the map, reality is a handful of vacant holiday houses clad with lose, huge roof tiles cut from stone and it’s from here on you enjoy great views. It’s quiet, at weekends you might find some hikers driving up for walks, midweek maybe a worker for the electricity company appears in a van but otherwise you’ll have the climb for yourself and can attack the steep hairpins. Just before the top there’s a car park and a small hotel – open for that polenta in summer and winter – and the summit of the pass is easy to spot, a hump in the road cluttered with a variety of signs each signalling the pass.

The Verdict: 10km at 10%. There are steeper climbs and there are longer climbs but few roads are as steep for as long. It’s easier than the Zoncolan and perhaps comparable to France’s Mont du Chat and the Mortirolo in stats and because it rarely offers a great view, although the San Carlo feels faster thanks to the wide and regular road: it’s breathtaking because of gravity rather than scenery. It makes for the perfect training climb as it’s steep and steady, a pure test of Watts per kilo and all on a smooth road allowing for a high VAM and comparisons between efforts on different days. Only for a gym it’s remote compared to hubs like Monte Serra or the Col de la Madone. Otherwise it’s not the most scenic, nor loaded with sporting history, but its merit is an alternative route up the Col du Petit Saint-Bernard which it joins later, although a harder option.

Ride more: once at the top you continue and descend to La Thuile where you can either go up to the Col de Petit Saint-Bernard and France, or back down to the valley for Morgex to complete a 30km loop. Or start exploring the roads that run perpendicular to the valley such as the scenic Val Ferret to your north above Courmayeur or several below which lead you into the aptly named Gran Paradiso park, with near-empty roads where you’ll likely see more Ibex than people. 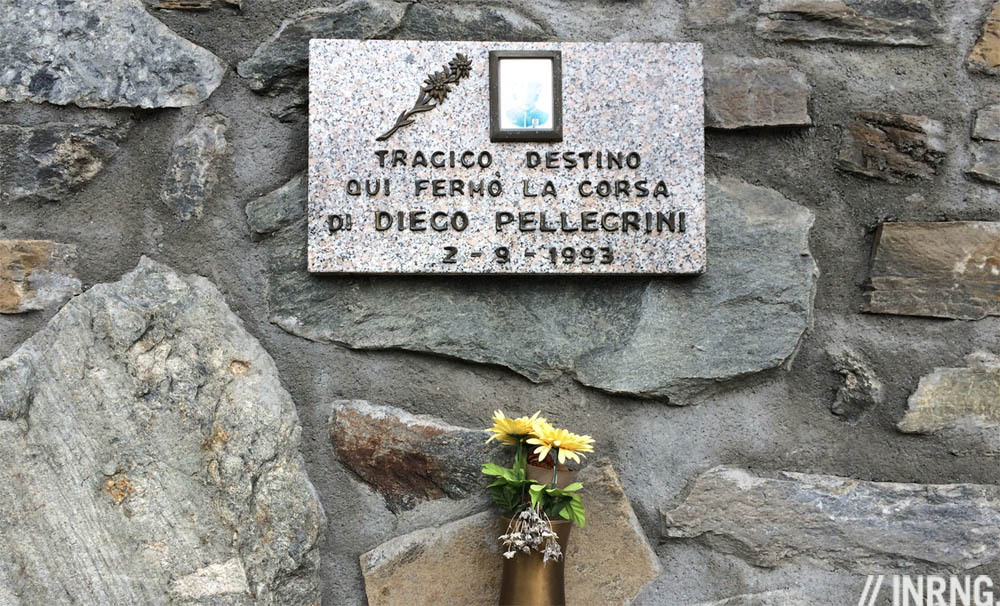 History: it’s been used in the 2006 Giro when Leonardo Piepoli won into Thuile, the town just below the pass. For Piepoli it was more than a stage win, it was a tribute to Diego Pellegrini who’d died racing down the descent of the San Carlo in 1993 and to whom there’s a memorial plaque beside the road. It’s a regular in the Giro della Valle d’Aosta, one of the most mountainous races on the Under 23 calendar. 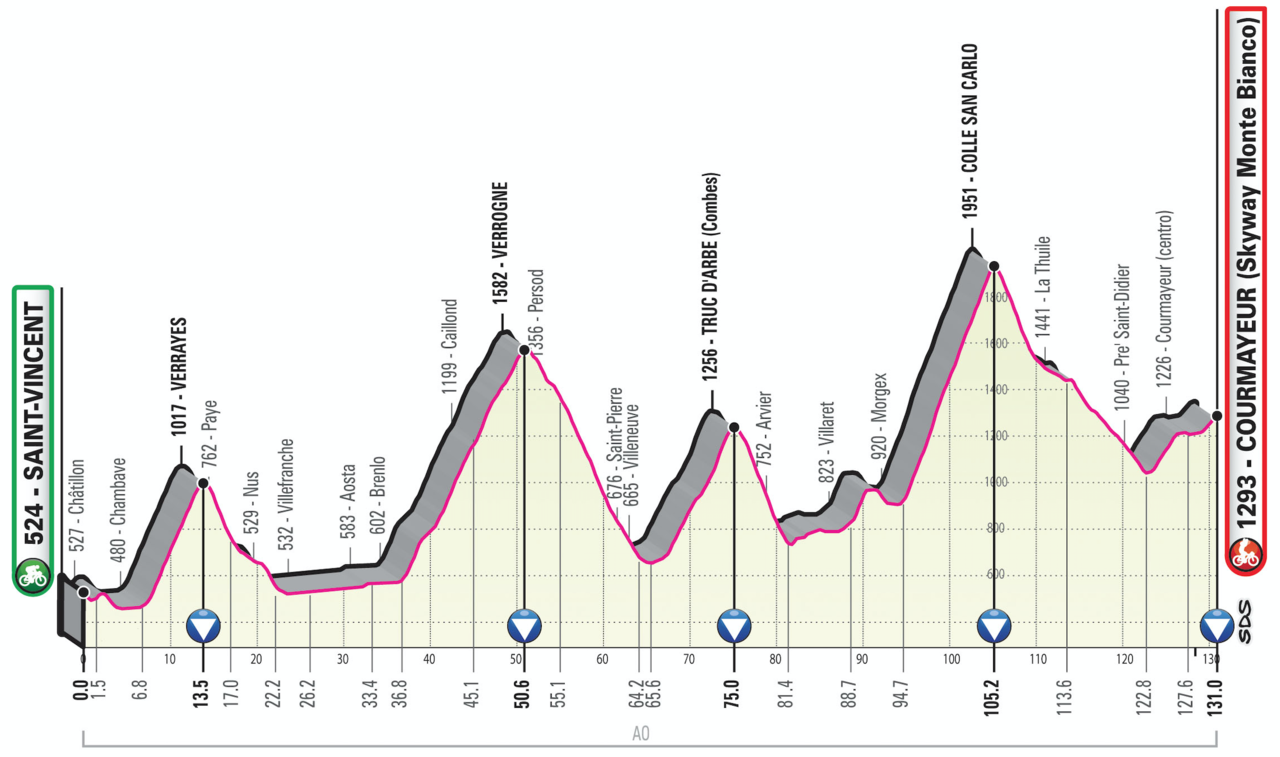 Future: it’s the last climb of Stage 14 of the Giro and comes after the race borrows three other side roads in the Aosta valley, 3,500 vertical metres in 131km.

Transport and access: right in Italy’s top left corner but still a short distance from Milan and Turin. The Aosta valley has excellent roads including the crossing to France but this tends to make a it place people go through, rather than stay. There’s a sleepy rail link too. A cyclist can enjoy a long weekend here but a week could be too much because if you’re based in one spot then it can be a long ride up or down the valley to find a variety of climbs off to the side, often you’d be riding out and back on the same road too. Snow can linger at the top of the San Carlo until June but the road will be clear long before and the Aosta valley has a microclimate that anecdotally makes it feel like one of the warmest places in the Alps, you can ride a south-facing pass like the San Pantaleon in shorts and short sleeves on a good day in March when winter clothing would be required on a similar latitude in the Alps.