French magazine Le Cycle has labelled the Mont du Chat “one of the hardest” climbs in France and it’s back on the route of the Critérium du Dauphiné and the Tour de France after vanishing from these races for decades.

A challenging climb, almost traffic-free and with superb views from the summit. What’s not to like? Actually it’s hard work with few rewards along the way and a useful example of how the enjoyment of a climb depends on more than the road itself. The Route: the Tour de France and the Critérium du Dauphiné will climb up the west side of the Mont du Chat taking the D42 just to the south of the hamlet of Trouet. This is 8.7km long and climbs to 1504m, a vertical gain of 905m with an average gradient of 10.5%.

The Feel: where’s the start? Unlike a typical mountain pass which climbs out of a glacial valley with an obvious beginning, here there’s a lattice of approach roads to chose from and they all rise up towards the official start so you’re climbing long before the climb proper. Take the “Tour route” and you’ve got three kilometres with plenty of 8% sections meaning hard work just to get there. The D42 junction is where you’d start your stopwatch or Strava segment and there’s no mistaking the junction with its sign for the Belvédère du Mont du Chat. 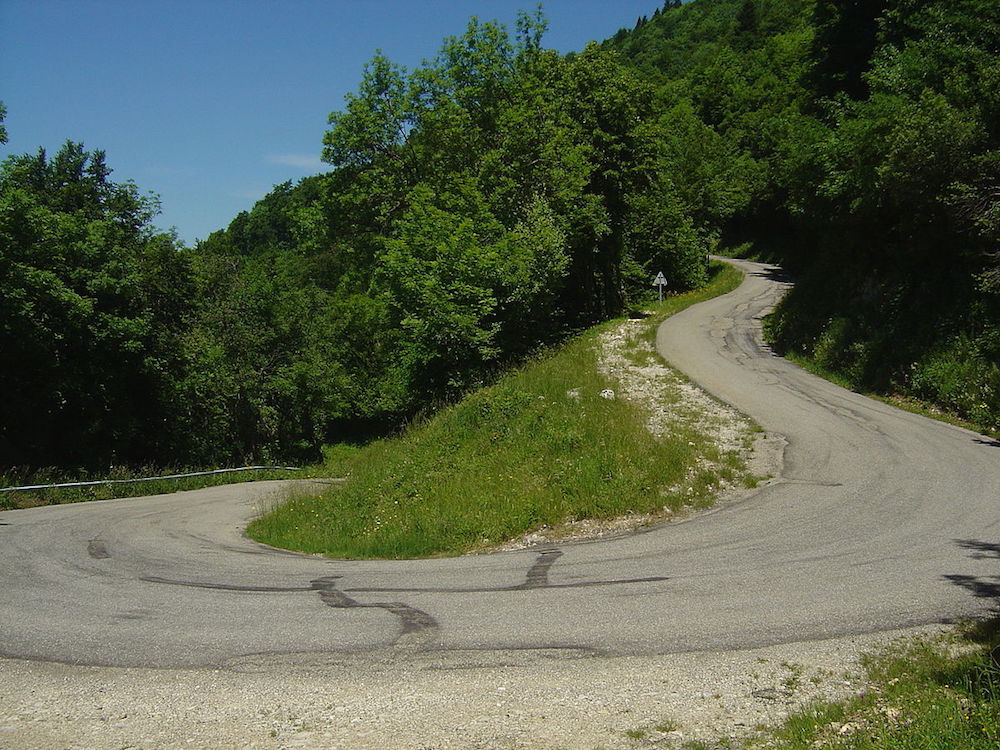 As steep as it looks

It starts oddly, for all the talk of a savage climb there’s a gentle start through the hamlet of Crémaire, look up at the mountain above and it the top doesn’t look far away. But after passing some farm buildings and fields you round a bend and see the road ahead rearing up in front of you, the gradient all too obvious visible. From here on it’s one long green tunnel, a strip of tarmac enclosed by beech, oak and later on pine forest. The canopy is so thick there’s rarely a view of the landscape below nor the summit above but it’s often shaded which helps on a hot day. With little to see you’re soon you’re reduced to a private battle with gravity that’s going to last 40 minutes or more and on a road that’s uncommonly steep, regularly at 12%, sometimes at 14%. There’s a brief flat section after 4km, a welcome surprise but it’s gone in 20 seconds and comes with a price, in order to make up the average the slope soars to 15% soon after. 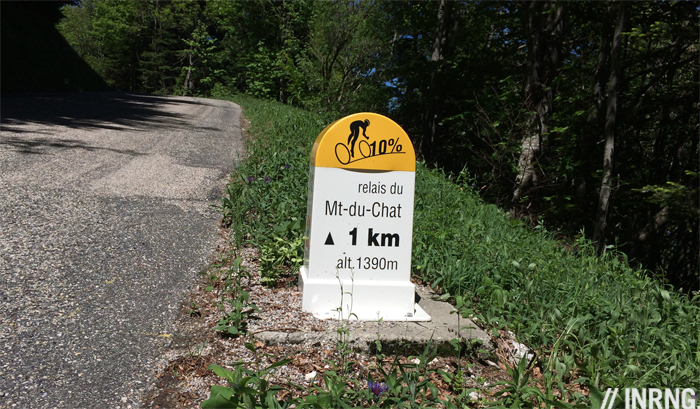 Helpfully each kilometre is marked with a small sign to signal the altitude the average gradient for the upcoming kilometre and how far to go to the top; unhelpfully each one appears slowly. This feeling isn’t irrational, it gets steeper the longer you go on. The road is rough in places, not deteriorating but just made from a harsh surface which makes the battle harder still.

The gradient and its length makes it a tough climb, you may visit the region with Alpine gear ratios but chances are you’ll be bench-pressing your way up here and putting your back and arms into the effort. It’s reminiscent of the Mortirolo where you come geared for the Stelvio but have to leg-press your way up.

If there’s not much to see on the way up it’s very quiet and feels more likely that a deer or fox will appear than a car. Sometimes a cyclist flies down, Ag2r La Mondiale’s brown shorts were a surprisingly common sight around the area, the team’s HQ is nearby and they have plenty of supporters. Eventually you round a bend, spot the road levelling out ahead and there’s building ahead and excluding a small hunting or forestry shack earlier on it’s the first construction since leaving the barns at the start. If you’ve got any energy left use it up here because you’re about to reach the top.

If the weather is good be sure to stop at the top, there’s a special area to enjoy the amazing view across the Lac du Bourget and the Alps beyond. The severity of the ascent means the descent has its moments too, freewheel and your speed quickly picks up but the wooded nature means it’s always hard to see what’s coming so you keep having to back off.

The Verdict: the “travelling is better than arriving” concept doesn’t hold here. The defining feature is the severity, a hard climb where you may enjoy the challenge but there’s little reward during the climb such as scenery, sweeping hairpin bends or amazing vistas. You’re unlikely to stop and take photos along the way. It’s a contrast to the nearby Grand Colombier which offers severity with stunning views along the way that invite even the most ardent Strava fiend to pause and gaze at the Rhone valley and the Alps. The summit is the big reward, an achievement and a fine view that even the locals must enjoy again and again.

The Eastern Side: the Tour may go up the western side but more cyclists ride up the eastern side starting near the pretty Lac du Bourget, Strava suggests people log rides up the eastern side 2.5 times more often. This is the side rated by Le Cycle as one of France’s hardest climbs and they awarded it six stars, extremement difficile. It merits the rating being 13.5km long at an average of 9.4%. It’s harder but more rewarding, still a green tunnel but with some breaks you catch glimpses of the azure lake below along the way. The Tour will descend this but this is the recommended side to climb. Once again be sure to stop and enjoy the view at the top.

History: it’s only appeared once in the Tour de France. It was a second category climb in 1974 which sounds inexplicable. Back then the inflationary hors catégorie label did not exist and a climb’s rating owed more to its altitude than its difficulty. On the way up Raymond Poulidor attacked Eddy Merckx four kilometres from the summit and gained over a minute’s lead by the top. But the ageing Merckx relied on his descending skills and power, sprinting out of every corner, to bring back Poulidor and inevitably win the stage into Aix-Les-Bains on his way to winning his fifth Tour de France with Poulidor finishing second in Paris. It’s also featured in the Critérium du Dauphiné along the years, as recently as the 1980s and is the decider for the Classique des Alpes, an international race for juniors although they don’t climb all the way to the top.

Back in the days of Merckx and Poulidor this was a harder climb. Not that it was longer or steeper but because of the bikes used at the time. They were heavier but more significantly they didn’t have the range of gearing enjoyed by pros and amateurs alike today. Poulidor used a back-breaking 44×23.

Future: it’ll appear on Stage 9 of the Tour de France. It comes 25km from the finish which looks and sounds far, can it be decisive? The upper slopes of the climb are so hard and the descent is so steep that if anyone can escape then a chase will be hard to marshal until the final 10km of the stage and the final run into Chambéry.

France’s Mortirolo? they’re comparable but not the same. Both are steep and invite low gearing. The Chat’s road surface is rougher but the Mortirolo changes gradient more often. The Mortirolo is a Giro staple these days and has an obligatory Pantani memorial, the Chat has yet to be visited by today’s peloton. 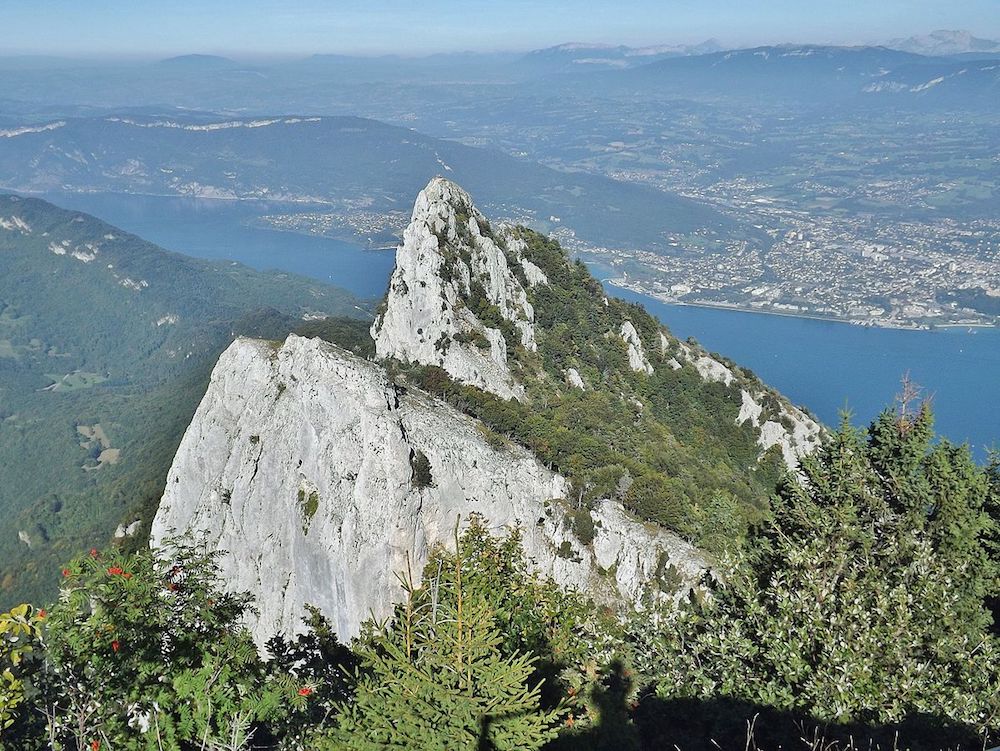 Mont du Chat? Literally “cat’s mountain” it takes its name from the Dent du Chat, “the cat’s tooth”, a piercing outcrop of rock that resembles a pointed tooth. However debate rages about the origin of the name, it is the dental resemblance or is it from chas, an old world meaning a hollow or the eye of a needle, a crossing point over the mountain if you like.

Rock and role: this is the southern tip of the Jura mountains and technically not part of the Alps.

Travel and access: Aix-les-Bains sits below the mountain on the other side of the Lac du Bourget and has autoroute and TGV rail links while Chambéry is just a spin away too. Both make fine bases for Alpine riding with numerous other mountains and passes within reach (Grand Colombier, Revard, Chartreuse Trilogy and plenty more) as well as flatter valleys and large lakes to lap for easier rides.