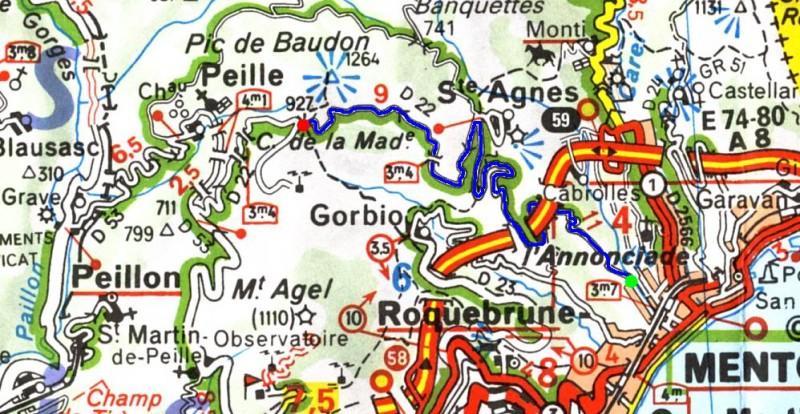 As the fourth part in a series exploring the famous roads of cycling, here is the Col de la Madone in France. The idea of the series is to discover the road and its place in the world, whether its part in cycling’s folklore or to explore what it is like on a normal day without a race.

This road lacks the myth and history of the others in the series as no race has used it. Yet it has given its name to Trek’s top road bike and was the first clue that Lance Armstrong was going to “win” the 1999 Tour de France.

Since then it’s been a key test of fitness, an outdoor gymnasium, a laboratory even. As such it is almost a workplace for the pro cyclist but think of an office with stunning views and fine weather and one that climbs from sea level to almost a kilometre in the sky in no time.

The Route
The climb is 13km long and averages 6.7% but the typical gradient more like 8% as it goes from sea level to 925 metres.

The D22 climbs straight up from the seafront in Menton, past the railway station and requires the rider to negotiate several junctions and roundabouts so if the road is climbing, the climb has not begun. Pass the Weldom DIY store, keep going and look for the sign marking the edge of Menton and then press “lap” to start the stopwatch at the bus stop soon after.

The road then climbs gradually, winding up via a series of hairpins and passing underneath the giant viaduct that carries the coastal autoroute.

The road then climbs higher, a junction near the village of St Agnès (follow the hairpin round rather than go into the village) and some tunnels cut into the rock mark progress before the final approaches, the ridge marking the mountain pass an obvious point.

The Feel
You can get frisky on the first hairpin bends but the whole point is pacing so start easy with a smooth cadence. Once these were farms with terraced citrus groves but the route is lined with houses now; swimming pools replace the old stone cisterns that retained precious rain water.

The further you go the wilder it gets but it’s a gradual process. One constant is the smell of pine. The road is an ideal procession uphill and the traffic fades the higher you go the road gets narrower. It’s always wide enough to ensure traffic doesn’t block the way, although like much of the region the roads can be crowded. Once past St. Agnès the road enters the pinède or pine forests and takes on a much wilder feel. The road surface becomes rougher too. The point of this climb as a training tool is to test the climbing speed and those wanting to break the record need to know the road because the slope does vary, it’s a climb that rewards the more you climb it.

The summit is worth a stop. Catch your breath first because the view will take it away, having climbed away from the sea there’s finally a moment to appreciate the altitude and view. Then carry on because once you’ve passed it’s time to ride on to the village of Peille and a different world awaits inland, quiet roads and wild hills. In no time you’ve gone from the bustling coast to somewhere with an ancient feel.

Why is it famous?
It’s not be made famous by the Tour or Giro. No, we have to thank Lance Armstrong instead. Or blame him given the public mood. But like several themes in cycling, Armstrong wasn’t the first here, just the most well known. Trek named the Madone, their top bike, after the climb, partly because it was a key test for Armstrong but probably because it sounds Euro, allowing the dull brand of Trek to sit alongside mystic names like Colnago or Orbea.

The first user was Tony Rominger. The Swiss rider won the Vuelta three times, took the Giro once and challenged Miguel Indurain in the Tour de France, one of the best riders in the 1990s. He was client of Dr Ferrari and Ferrari’s idea was to simulate a 30 minute climb, a steady effort at threshold pace. Now a rider can try this on the flat but traffic, junctions and other things get in the way from a constant effort, if you coast for a moment you stop working. An uphill effort is better, especially as you can refine other aspects like pedalling efficiency along the way too.

As a practical solution the Madone fitted, the right kind of ramp: a short ride from Rominger’s Monaco apartment, no junctions and hard uphill almost all the way. And it’s south-facing by the sea which makes it warmer compared to other inland climbs that get snow in winter. 30-35 minutes is a solid effort, the kind seen on many an Alpine climb. The Tour’s climbs can be longer and Ferrari was also advising Rominger to tackle the Col de Turini, a lengthy nearby climb that reaches over 1,600m. The Turini never became so famous although to this day you’ll find the likes of Chris Froome using it as an Alpine test.

Rominger set a time of 31.25 on the Madone in 1996 and the record stood until Lance Armstrong did 30.47 just before the 1999 Tour de France, a clue he was going to “win” that year. Later Tom Danielson set the fastest time of 30.24. Perhaps there was a tailwind that day because he’s never got the results to match this performance. Since then Richie Porte and Chris Froome have gone faster.

Madone means Madonna, not the singer, but Mary the mother of Jesus. Many old road junctions and paths in France have crosses and small shrines, some even have chapels for travellers. Sometimes these are tributes from travellers at other times they were discreet burial spots for criminals or suicides who a priest forbid from the village graveyard. At the top of the Col here there’s no shrine but there is a war memorial, a twisted artillery shell with an inscription. More recently there’s a wooden plaque to Manu Ayral, a local cyclist and Strava fan. 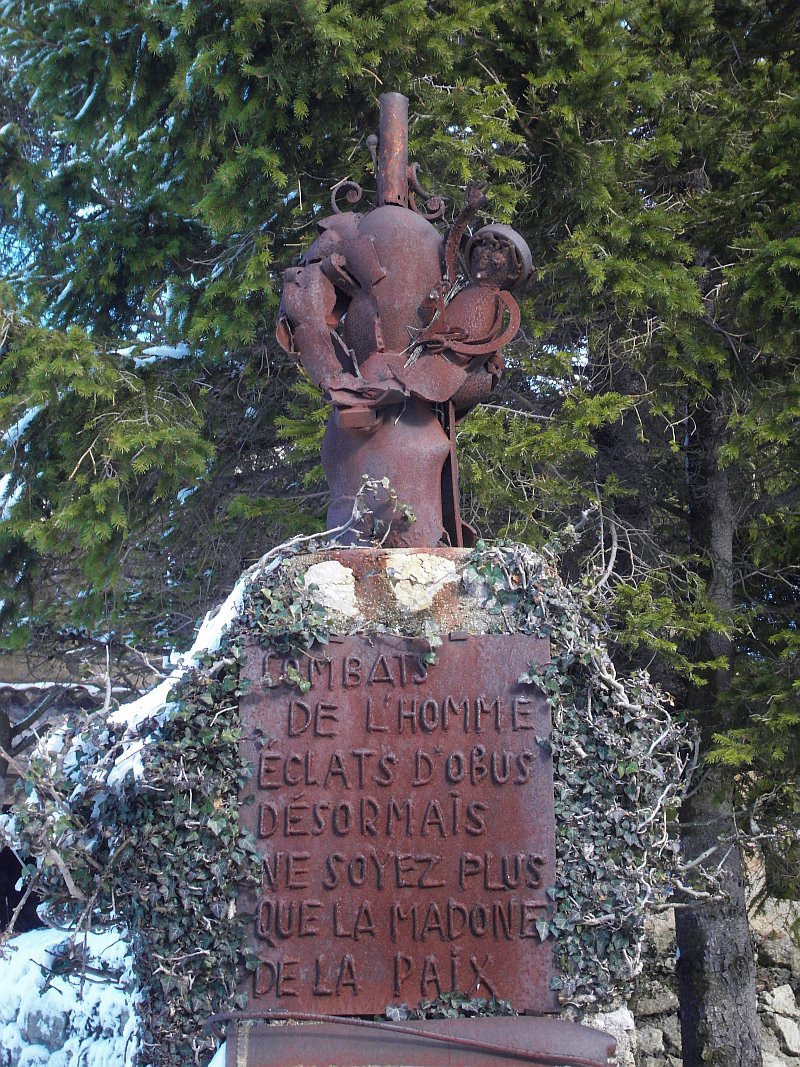 Battles of man, fragments of shells, here on you will be no more than the Madonna of peace

Access
The city of Nice is very close and its airport offers connections to Europe and beyond. If you want to stay in the area Menton is a good pick because it is a scenic town but there’s plenty of choice in the region. Just do your homework, there’s a lot of crummy accommodation. If you want value, try heading across the border into Italy and as a bonus you can do the Poggio, Milan-Sanremo’s famous climb.

This is one of the warmest parts of France but winter can still be cold, especially once you leave the coast. Menton is half-famous for its lemons, proof of the mild winters but the cyclist cannot just ride up and down the coast, no matter how scenic the coastal roads. The corniche roads nearby are legendary, for example the Col d’Eze and the finish of Paris-Nice. There are many good roads within reach, head inland for example to tackle the Col de Turini and the hairpins above the Pas de l’Escous, better known to rally fans.

You’ll spot many riders in team kit on these roads only it’s not Sunday cyclos in replica gear but actual stars of the sport with many living in nearby Monaco like Chris Froome, Tom Boonen and Philippe Gilbert, with many more living nearby. And yes, they often use the climb as a test. Just avoid July and August as tourists migrate to this and the area becomes choked by traffic.

Summary
A scenic ride in it’s own right, a useful way to head for the hills, this is a climb known to many thanks to Trek and Armstrong. Yet unlike most famous places in cycling, it’s not because of racing but training, one of Michele Ferrari’s many outdoor laboratories. As such the climb’s reputation is purely thanks to marketing and Michele Ferrari. Will Trek’s 2014 range still feature the Madone?

As ramp tests go this is one of the most scenic and intriguing although there many great roads in the region. And whilst the myth of Dr Ferrari crumbles, this road is always worth the effort. Time to reclaim it.