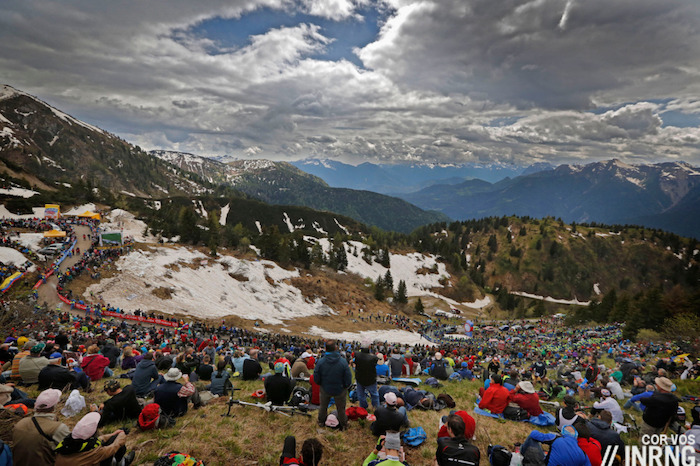 For decades the Giro visited its classic climbs. For good reason as the Stelvio, Pordoi and Gavia are as difficult as they are beautiful. But it wasn’t enough for some and the hunt was on for new challenges and in 2003 the Giro tackled Monte Zoncolan.

Viewed from afar it’s just 10km long and only reaches 1,730m above sea level but it is one of the steepest roads in the sport and has quickly become one of the most feared climbs.

The Route: there are three ways to the top, two on the east where you can take the main road from Sutrio or the forest road from Priola. The Giro d’Italia has used the Sutrio road before but the third route, the western flank from Ovaro, seems to have become the settled choice for the Giro in recent years. From Ovaro It’s 10km long and climbs at an average of 12% which would be enough to make it an exceptional climb but it’s got sustained sections at 15% or more. It climbs to a ski area. 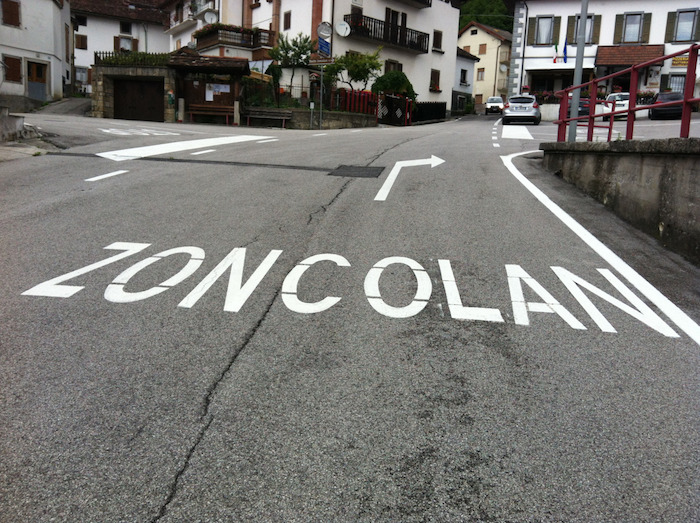 The Feel: it’s hard right from the start. Watch on TV and when the road starts climbing out of Ovaro the commentators will say the climb proper has yet to start but it certainly is climbing with double-digit percentages. A church sits by the road, its tower oddly built on the other side of the road, almost as if the bells should ring for anyone passing. You climb into the village of Liariis – named after a Danish directeur? – and the road flattens out. You must eat and drink here because later just taking a sip will affect breathing and balance. 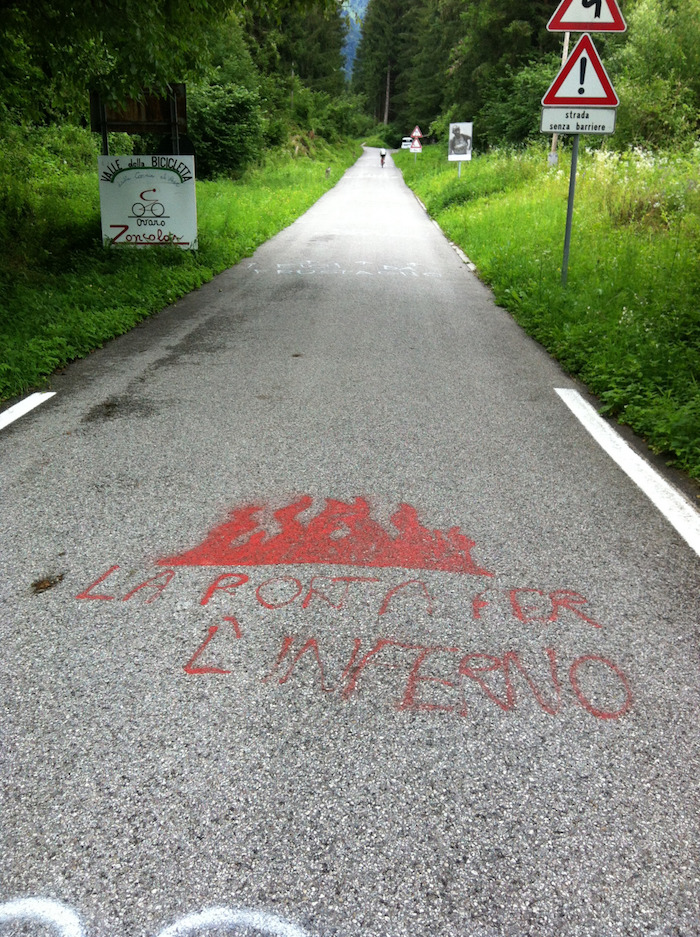 As you leave the village, right by the exit sign the road rears up and it’s immediately 15,16 17%. The image above shows the exact point but the camera never captures the gradient. It’s tempting to get out of the saddle, the kind of response you’d use on the Mur de Huy but for a cheap comparison this is like eight Murs stacked one on top of the other. Stand up here and you probably won’t last. We take it for granted that the legs spin but you’re quickly reduced to concious “left, right, left, right” commands to the legs to push on, a series of leg-presses.

On TV the race climbs up so fast but the lone rider scales each long ramp in slow motion. The Mortirolo is a rival for difficulty but it’s packed with hairpins, intermediate goals to aim for and if it bites it rolls better. The Zoncolan has switchbacks too but progress between them seems so much slower. 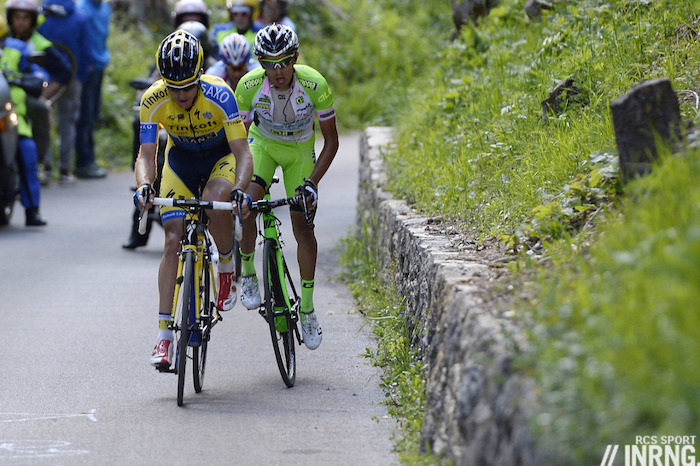 There’s little shade once the sun is up. Tree stumps line the road, one for every for every pair of wooden legs. They felled the trees so when the Giro rode up they could have clear helicopter shots of the race. Now the sun gets a clear shot on you and with little breeze as you winch your self up at 8-10km/h it can be hot.

There are views but chances are all you’ll be looking for is the road and the easiest line up, riding past muddy sections where forestry work has dirtied the road, all that matters is the few metres of road in front. Lift your head if you can for the signs celebrating the sport’s famous climbers.

Hard? Yes and anyone who glances at the profile above may regret their haste. It’s not obvious from the illustration but there are sustained sections at 20%. Worse, when the slope eases to 14% you’re unlikely to have much left to respond, try to change up a gear will only leave you grinding although locals who climb more often will learn to use these sections to their advantage; any pro riding in the Giro would do well to visit the climb a couple of times. It’s this irregularity that makes it so hard, if it was 20% all the way you’d just borrow a mountain bike but the subtle changes in gradient tease the rider. 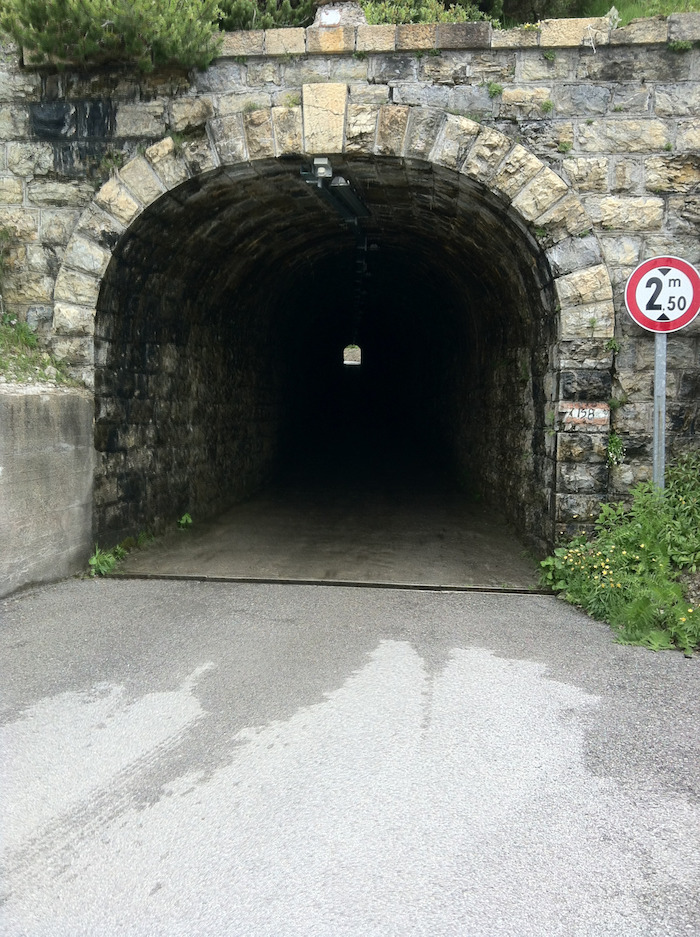 Near the summit and the road begins to open up with larger views but suddenly it turns into the mountain. Three short and damp tunnels arrive. By now the gradient has eased but it’s still 10% and too early to sprint for the top. It’s here that the climb changes. After slogging up a road that resembled a drainage gulley or the route of a bobsleigh course, suddenly the landscape opens up and the road zigzags through fields. When the Giro is here it makes for a natural theatre where spectators can stand in the stalls and watch the riders emerge from the tunnel below and slowly make their way to the line. Right at the top and there’s a sign and some rusting metal artwork to commemorate the climb. It’s no dead end summit finish, you can continue down the other side.

The Verdict: a relentless ramp where even the best climbers ascend at 7-8km/h an hour. It’s hard but not searingly painful, a grinding slow-mo effort that is tiresome but as it takes so long it lacks the acid bath intensity of, say, the Mur de Huy. The Zoncolan strips away the need for technical skills, reducing the rider to Sisyphus-like creature forced to roll the pedals one by one. Some climbs can be joyful as you ascend through scenes from a postcard or pass legendary places but the Zoncolan reduces cycling to winching. Climb it and say you’ve done it. 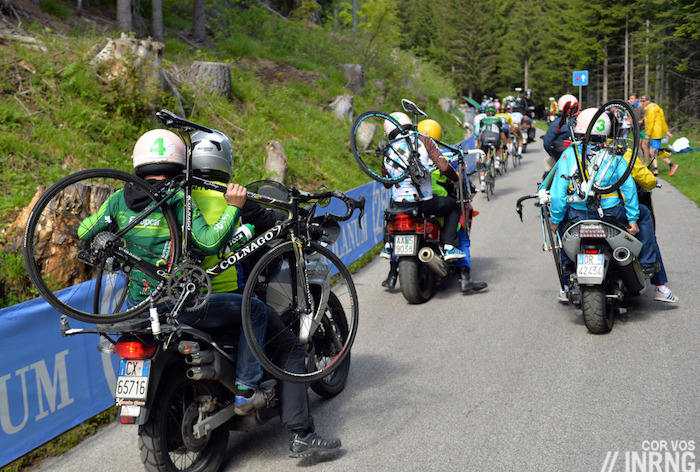 It’s so steep that:

But hold on… this is how myths spread. It’s neither too steep nor are the tunnels at the top to small for a team car; it’s just motorbikes are used as they take up less space. As for Cipollini, he quit the race and never got to the climb although he and his team did have an MTB prepped which says more about stuntman than the climb, he wanted attention on a day for himself and his bike sponsor when he’d otherwise be forgotten. The Zoncolan is hard but it has its rivals, the nearby Crostis, the Mortirolo, the Angliru and so on although its name does stand as a reference. 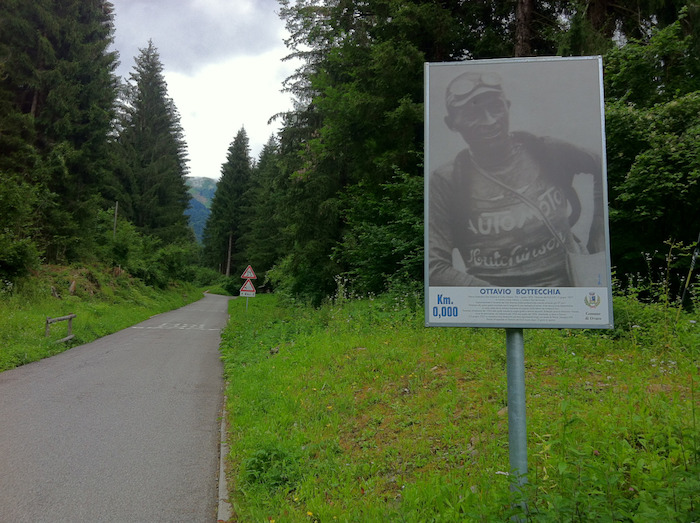 History: ladies first: the Giro Donne was the first race to visit in 1997 and Fabiana Luperini won. If this put the climb on the map it wasn’t until 2003 that the men arrived. Even taking the “easy” side from Sutrio made an impression and it’s been included five times in the race. It appeared under Angelo Zomegnan’s reign as Giro director, a time when “Zom” sadistically took the race to new places in search of spectacle, staging the race for TV. If the Giro couldn’t be the biggest race then making it the hardest or scariest contest was as good, if not better. But this brought a kind of spectacle inflation and the more they searched for wild climb the more it devalued existing giants like the Stelvio or Pordoi and what were once the hardest climbs of Italy became relatively humdrum.

As for the Zoncolan itself, the spectacle has been mixed, in 2010 Ivan Basso dropped Cadel Evans, a decisive moment in the race as Basso’s pacific face became a snarling rictus of rage. But it’s so steep that wild attacks are impossible and 2014 merely saw Nairo Quintana mark his rivals. 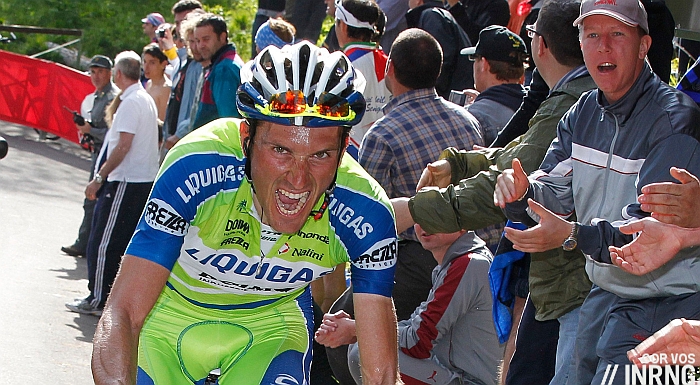 The Zoncolan Paradox: the climb is so hard it can prevent racing. It takes such an effort to accelerate that the wise idea is to measure your effort rather than trade blows. Go into oxygen debt here and the you’ll never make the repayments on the 20% gradient. It means everyone’s locked in a private fight against gravity rather than their rivals, an expression of W/kg rather than flair. This linear style is a sensible approach but doesn’t make for good TV.

The slope that launched a thousand chainsets: look back at old footage of Eddy Merckx and others and they rocked their shoulders when climbing. With old six or seven speed bikes racers didn’t get gears much lower than 39×23 so when the road reared up they were left grinding, each pedal stroke a leg press. Today’s riders sit steady, largely thanks to improved gearing, and they can spin up the steepest of summits. So when the Giro arrived on the Zoncolan gears were needed to prevent a retro drama. It coincided with production of compact chainsets and some teams were quick to fit them, 34×28 is common for a pro on here, 36×32 too. Many cycle industry trends rely on mimicry and the pros’ use of compacts gave legitimacy to smaller gears and sales have since flourished.

Gearing: Snobs might think sprockets with more teeth than a circular saw blade looks amateurish but they’ll be the ones looking bad when they’re forced to walk up. If you’re visiting the nearby Dolomites and have opted for low gears you’ll need to go much lower again. For comparison a pro in the Giro uses 39×25 for a mountain stage but they’ll opt for 34×28 here, a gear that’s roughly 25% shorter. It’s expensive and awkward to change gears but the Zoncolan is steeper on a totally different scale so at least be warned if you don’t come prepared. If you’re stubborn and in the Dolomites for a trip then save Zoncolan for last so any resulting knee injury doesn’t ruin the rest of the trip.

Travel and Access: tucked in the north-eastern corner of Italy, the Zoncolan nestles in the mountains. Cities in the plains like Venice, Padova, Trentino and Trieste offer major transport connections but sit far from the mountains. Udine, capital of the Friuli region, makes a better base.

The Zoncolan also sits close to Austria and Slovenia. Indeed Slovenian capital Ljubljana is not far away, if you wanted to check out some Slovenian climbs then the Zoncolan is only a short trip into Italy.

Photo credits: Cor Vos and RCS Sport plus thanks to reader Kelly S for the rest of the images, he took a camera to record the road, a generous effort.