Which Races Will Katusha Miss? Last Friday the UCI announced that Katusha’s Eduard Vorganov had been notified of A-sample finding of a banned substance called Meldonium. Katusha now face a suspension from racing of 15-45 days which will undermine their spring classics campaign and their membership of the self-regulatory group the MPCC means they could sit out a second period too.

Meldonium? It’s a pharmaceutical made in Latvia and used in Eastern Europe to treat severe cardiac conditions and according to the web it can increase “exercise tolerance”. It had been monitored by WADA in 2015 and and there was “unequivocal analytical data allowing the estimation of the prevalence and extent of misuse in professional sports” which meant WADA banned it for 2016. Russians were warned last September.

The Rule
The UCI copycatted the MPCC’s self-suspension rule for 2015 where multiple doping cases lead to the whole squad being stopped from racing. You might remember that the Androni team were the first to be suspended under this rule. They tried and appeal but lost which might bolster the jurisprudence here. We’ll come back to Androni’s case in a minute but here’s the text of the rule. 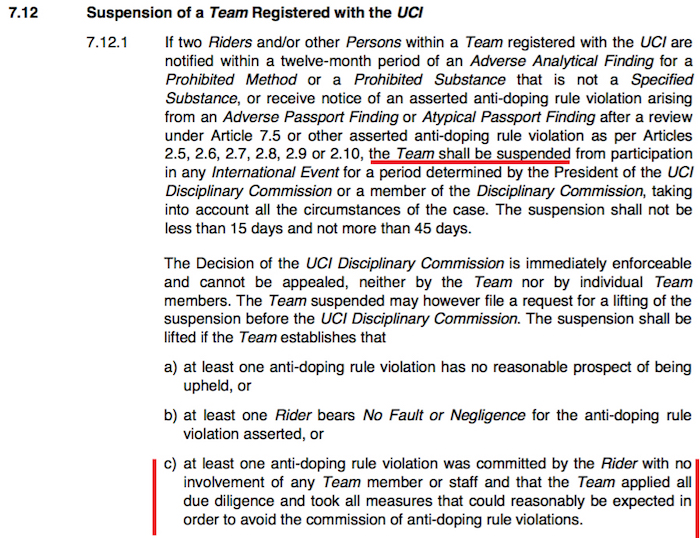 It’s pretty clear. If two riders are notified of an adverse analytical finding then that’s enough to get the team suspended from racing: the only question is the length of the ban. It’s on notification of the adverse finding and not on conviction following a hearing or a B-sample. That said a report in Velonews says “Team and UCI officials are awaiting the results of the rider’s “B” sample” which is curious as Androni were suspended long before their riders had a B-sample returned.

After Luca Paolini’s Tour de France cocaine bust this means two potential anti-doping cases for Katusha within 12 months. Katusha are actually on their third notification in 12 months as Giampaolo Caruso was informed of his EPO A-sample positive last year but this was a retro test on a sample taken before the rule applied and the new rule cannot be applied retroactively.

Note it’s just a temporary halt to racing, everyone’s wages should be paid. Once the suspension has started Katusha can file a request to have it lifted based on the three paragraphs listed in the rule above:

A little history
You’ll remember the UCI’s Licence Commission tried to strip Katusha of its World Tour licence in late 2012. In short the Licence Commission was fed up with repeated doping scandals and tried to put its foot down. Katusha appealed to the Court of Arbitration for Sports, pleaded it would make internal reforms and as part of its commitment to cleaner ethics, join the MPCC group of teams. It duly won back its licence for 2013.

The other back story to this is that Katusha is the team of UCI Management Committee member Igor Makarov. Makarov will surely have no say over the process but it does highlight the delicate ethical concerns where one part of the UCI is tasked with sanctioning a senior member’s interests.

Androni case study
The Androni team was suspended last August following notifications of Davide Apollonio’s EPO sample and Fabio Taborre’s sample for FG-4592, sometimes labelled “EPO in a pill”. The Androni team were hit with a 30 day suspension. They tried an appeal but it was not lifted. Team manager Gianni Savio, speaking to cyclingtips, said he and colleagues did try to put in place structures in the team but he had to “prove the unprovable” to get the suspension lifted. The team’s secondary status, the focus on races like the Vuelta meant that nobody seemed to pay too much attention. Katusha looks different and they’re wealthier too, they can hire the best of lawyers.

Katusha case guess
Remember the rule says two “notifications” means a team “shall be suspended”. It’s phrased unconditionally which suggests a ban has to follow like night follows day, that the Disciplinary Commission will meet this week and announce a ban in the coming days. If so the only procedural question is over the length of the ban. If two quasi-EPO cases got Androni a 30 day suspension then cocaine and a questionable pharmaceutical are arguably less serious and could bring a 15 day ban. But this involves trying to weigh up infractions when the WADA Code itself does not make so many distinctions.

Practical questions
But there are other questions over logistics and PR. The UCI’s decision is “immediately enforceable” but when they stopped Androni for 30 days the decision was news on 29 July and the suspension began in August. This means Katusha could be able to ride out any race they’re doing now which means a less disruptive exit rather than losing face in front of a wealthy emir or being “perp walked” out of the race. What can’t be allowed is a sense that the timing suits Katusha too much either otherwise, we remember how bad things looked for Astana when it looked like they timed one of the Iglinskiy confessions in order to ensure they could ride their preferred races.

MPCC Self-Suspension
Katusha joined the MPCC in order to improve their image in 2013. The self-regulatory body has the original team suspension rules. They’re different in that the B-sample has to be positive and the suspension lasts eight days. If all this sounds easier there’s a big headache for Katusha as the suspension begins on the first day of the next World Tour race. From now onwards there is no race that Katusha want to miss. If Vorganov’s B-sample comes back positive between now and Paris-Nice then the eight day ban will commence on the first day of Paris-Nice which also means they’d sit out Tirreno-Adriatico too. From then onwards the races come thick and fast and an eight day suspension can mean sitting out two Sunday Monument classics in a row. It suggests a sporting version of Saint Augustine’s prayer: “give me virtue, but just not yet.” No good races to miss
Any suspension can’t be seen in isolation. You might say “it’s only the Tour of Qatar” but these are vital early season preparation races. Alexander Kristoff’s fabulous spring classics campaign, culminating in the Tour of Flanders, was in part thanks to the racing preparation he enjoyed in the weeks and months before as he racked up wins in Qatar, Oman, Paris-Nice and a podium in Kuurne before Sanremo and Flanders. Similarly if, say, Rein Taaramäe wants a good Paris-Nice then having the Volta ao Algarve in his legs can help too. Of course riders can try to compensate with training camps or motor pacing sessions at home but it’s not the same as trying sprint leadouts in a race, not to mention the forfeited prize money and other opportunity costs.

Conclusion
The issue seems unfair because collective punishment is surely only suitable for collective offences. Since there’s no evidence of a team conspiracy for the moment it seems harsh to suspend everyone, it breaks with the presumption of innocence and feels disproportionate. Indeed Eduard Vorganov isn’t guilty of doping: all we’ve got is an A-sample. But rules introduced by the UCI in 2015 mean news of the A-sample is sufficient to suspend a whole team for a minimum of 15 days. As well as the UCI’s new rules there is the MPCC self-suspension too. One suspension is bad enough but two, especially with the timing requirements of the MPCC, could be ruinous.

The combination of unequivocal UCI rules compounded by the MPCC membership means Katusha’s suspension from racing is more a question of when than if. The only questions are derivative, such as when the ban starts, how long it lasts, will Katusha lawyer up and will they quit the MPCC?