This is Belgium’s version of the Galibier, Tourmalet or Stelvio. It might not be the highest nor the hardest but its name is celebrated as a place central to the sport’s history. What’s it like to ride? 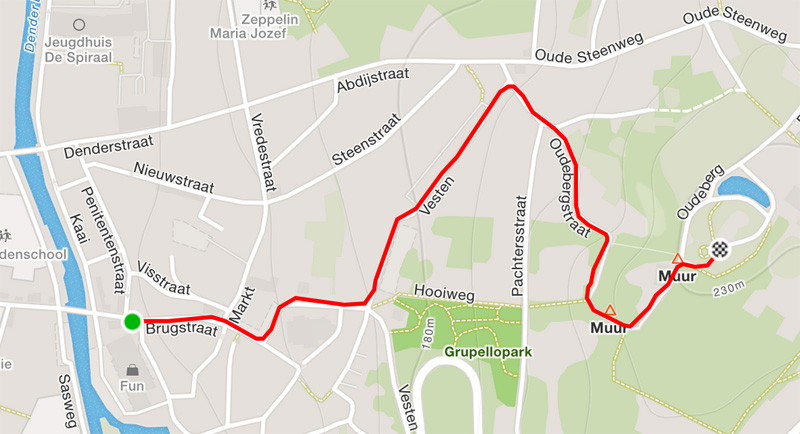 The Route: the wall section of the climb is right at the top of the hill. There are many ways to reach this short cobbled road but the map above grabbed from Strava shows the classic approach from the Dender river, across the market square and around to the start of the infamous “wall” section. In total it is 1km long with an average gradient of 8% and a max of 20%.

The Feel: many climbs begin before their official start point, you can often be toiling up an Alpine valley before a famous mountain pass begins. It’s the same here, you start climbing through the town of Geraardsbergen before hitting the Muur section. Start at the bridge and Brugstraat (“Bridge Street”) and go over the urban cobbles to reach the large market square. Normally the race thunders through but there’s no harm dawdling for a moment, there’s a Manneken Pis statue to gaze at if you haven’t seen his famous brother in Brussels. Ride on and there’s the sense you’re going the wrong way as the hill is over your right shoulder. At first the cobbles are even and smooth like tiles on a bathroom floor but the more you leave town the rougher they get. As the houses give way to garages and trees the gradient picks up and you arrive at what looks like a dead end: there’s a cobbled staircase ahead and to the right a cobbled path, each little more than two metres wide. Where did the road go? It’s the track to the right and it’s here that the “wall” arrives with rough cobbles. The road is cut into the hillside and the muddy banking brings dirt onto the road. This is the hard part but it’s short, a couple of hundred metres although they pass as a slow as you’d expect on a 16% cobbled climb before you turn and catch sight of the chapel at the top. Yet it’s nothing like the Ronde with its roaring crowds. This is a very civil climb, elegant even. Our sport mythologises it as a scene of battle, pain and decision but for the most of the year locals loiter and stroll. Gone are the crowds, a few couples walk children and dogs. Even when there’s no race on many cycling photographers capture the cobbles and the chapel, suggestive of Calvary and the Via Dolorosa with all the loaded imagery of crucifixion and hardship. In reality there’s a beer terrace just out of the shot. Arrive at the top and you wonder what all the fuss is about.

The Verdict: most of the climb is in the town, the wall section is only the final part of this. Often decisive in the Tour of Flanders, sometimes a coronation, the legendary status probably owes more to its position in the race than its gradient or rough cobbles. It’s crushing after 240km but on a shorter spin it’s not too bad. While the sport loads up on religious iconography for locals this seems to be a pleasant place for a walk and a beer.

The History: Geraardsbergen is a collection of villages around the Dender river and below the Oudeberg, a strategic hill that had fortifications of various kinds at the top plus a chapel as the illustration above suggests. The Race History: For cycling this climb is much loved, steeped in history and the symbol of Flemish cycling tradition? Not really. It was used regularly in Gent-Gent since 1950, the race which has since become the Omloop Het Nieuwsblad and tried a couple of times in the 1950s in the Ronde van Vlaanderen. It wasn’t until the 1970s that the Ronde started to use it regularly. It quickly became central to the race’s identity because of the finish in nearby Meerbeke meant the Muur was highly strategic and only a few riders were usually left in contention by then. When the race finished moved to Oudenaarde in 2012 the Muur was dropped as the organisers preferred other climbs like the Paterberg which are not only closer to the finish but offer space to install giant VIP zones and charge entrants for the wining and dining. Disgusted residents of Geraardsbergen staged a protest complete with a coffin to symbolise the death of the race. In truth the Ronde is flourishing but it does miss this climb. In reality though locals say this climb lost something when it was resurfaced over a decade ago and the brutal cobbles near the top were replaced by something smoother. The pavé is still hard going but nothing like the rutted, jutting stones that used to line this road.

Say it: Muur means wall. Geraardsbergen is harder for non-natives with the G sounding more like an H, almost as if you’re clearing out your throat. Hear for yourself at forvo.com. It’s easier to say Kapelmuur, “Chapel Wall” and just as acceptable. The French call it the Mur de Grammont and the French-speaking half of Belgium is only a few kilometres away.

Travel and Access: Geraardsbergen is a decent place to stay but chances are you’re visiting the region to explore all that Flanders can offer the cyclist. If so nearby Oudenaarde makes a good base, it’s 75km west of Brussels, and has the Flemish cycling museum. If you want more scenery and entertainment beyond cycling then Gent is a great pick. Brussels is the capital and well-appointed with road, rail and air links it’s not a high city of cycling at all, the legends lie outside in Flanders and in the wooded Ardennes of Wallonia. Consequently Brussels probably isn’t the place to stay for a trip to Belgium if you’re cycling.