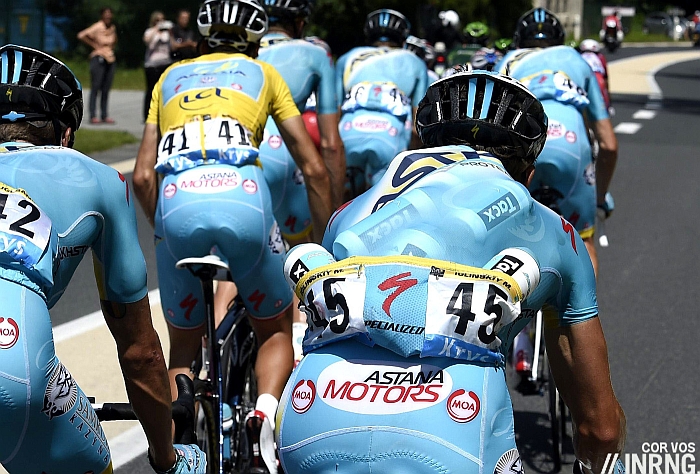 “Our image is tarnished because of these isolated incidents”
– Dimitri Fonfonov, Astana DS in L’Equipe

Two doping cases are dreadful news for a team but to make matters worse the Astana team now misses the final races of the year. This self-suspension is itself risks being tarnished if the team management has been orchestrating events to ensure they sit out the race of their choice.

Astana are members of the Mouvement Pour un Cyclisme Crédible (MPCC), a group of teams signing up to a self-regulatory code that goes beyond the WADA rules. One of the rules says a team must suspend itself from racing following two positive tests during a 12 month period. Crucially, and correctly, the small sprint says the team suspension begins once the B-test confirms or the rider confesses. It’s only fair to stop the whole team once you’re certain there’s been a doping positive.

But it’s here things are complicated. Last week the team was waiting for news of the B-sample to come back. Yesterday the team said Maxim Iglinskiy waived his B-test, thus admitting it all. in’s case. But it’s all in the timing as the confession suits the team’s agenda. Had Maxim confessed as quickly as his brother the suspension would have started last weekend and Astana would have faced the humiliation of missing its home Tour of Almaty in Kazakhstan plus avoiding Il Lombardia in Italy. With Maxim’s Monday confession the suspension only relates to the purgatorial Tour of Beijing allowing the team to turn up in the Adelaide sunshine for the 2015 Tour Down Under by which time we’ll have all forgotten about the Iglinskiys.

Praise due?
Perhaps we should welcome Astana’s move? The self-suspension is a tough penalty for the team and they’re shouldering it. They’ve been strict followers of the MPCC rules before, halting Franco Pellizzotti’s recruitment albeit belatedly and Vincenzo Nibali couldn’t use cortisone for a wasp sting . This time they could instead have walked out of the MPCC and carried on regardless with Beijing. After all there’s no obligation under the UCI rules or the WADA Code for a collective punishment. In fact the team suspension is a harsh measure as it denies wholly innocent riders of a chance to do their job, including some riders whose contracts are up and needed one last chance to shine and catch the eye of a team manager for a job next year.

Here’s the rub
Sport can involve probing and challenging the rules, we understand it when a team car “illegally” paces a rider back after a puncture. If professional sport is business than you might understand how teams game them rules, for example OPQS and Alessandro Petacchi tried to exploit a loophole to allow him to switch teams before the dedicated “transfer window” opened. Even the suspect practice of selling races can be explained, if not understood.

But if Astana management – let’s stress the conditional because we don’t know otherwise – has been gaming the MPCC rules over B-tests and confessions in order to time the suspension for convenience then this takes modern cynicism in pro cycling to a new level. Because the MPCC was created as voluntary set of rules to raise the bar of ethics of pro cycling it’s rules as as much about their spirit than their literal interpretation.

Perhaps Maxim forgot he took EPO and it was only on Monday morning that he remembered it all and rightly called up the UCI to cancel the B-test? Or maybe he was incommunicado for days, only emerging on Monday? All possible but so is the idea that Astana’s managers have played the rules to suit themselves, they certainly have a big motive.

Does the MPCC exist?
The MPCC is an umbrella organisation for it’s members. As a voluntary code it’s only only as good as its reputation. Rather like a group of cyclists battling a headwind, the MPCC only works if the teams collaborate. The other members would do well to press Astana on Maxim’s whereabouts over the past days and even have a vote on Astana’s presence in the group. Only 51% is needed for a binding vote.

UCI loose ends
Astana will miss the Tour of Beijing but the matter’s not finished. There’s the short term issue of whether the UCI will approve Astana’s absence from the Tour of Beijing. A no-show normally means a hefty fine but in 2013 the UCI agreed to Ag2r La Mondiale’s suspension from the Dauphiné and waived the fine.

Longer term is the broader tension between the MPCC and for how long the UCI will continue to tolerate the MPCC. As the governing body it’s setting the rules only to see the world’s top teams group together with tighter rules. Imagine a church that sees its congregation agree to stricter doctrine and worshipping in the temple down the road.

“I’m hopeful that these are two cases, which is two cases too many, but I’m hoping that they are isolated incidents and not symptomatic of a greater problem in the team.
– Brian Cookson, UCI President“

There’s also the issue of Astana’s World Tour licence for 2015. The UCI’s Licence Commission acts independently and it’ll surely review the matter but I don’t see the team losing its licence. There are ethical hurdles to clear and you might remember Katusha stumbled over these in the past (CAS 2012/A/3031 Katusha Management SA v. UCI). It’s most likely Astana get a written warning in private. But the Licence Commission welcomes moves above and beyond the UCI rules, for example the stronger a team’s internal anti-doping stance the better and joining the MPCC was a component of Katusha’s reinstatement to the World Tour

Conclusion
Astana will miss the Tour of Beijing and other races, a collective punishment for the Iglinskiy brothers’ EPO positives. It seems neither the UCI nor its Licence Commission will do much because Astana the team – as opposed to the Iglinskiys – hasn’t broken any rules. Presumably the UCI will allow Astana to miss the race, following the precedent it set with Ag2r, but we await confirmation.

All that remains is all a matter of perception and conduct. It’s hard to know for sure but it appears Astana’s managers could have conspired to ensure the team’s MPCC suspension only started when they wanted. Upholding the MPCC rules is laudable, orchestrating the timing the confession of a doping confession at the team’s convenience wouldn’t be. I suspect it’ll be hard to know who did what within Astana but it wouldn’t be the first time they toyed with the rules. Loyal readers will remember the case of Roman Kireyev who developed back problems so suddenly he quit the team mid-season, just at the same time as the team hired Andrei Kashechkin in breach of the UCI’s rules.