The Giro d’Italia might bring surprises every day but stand back and the route always seems so obvious. The race darts south, spins on the heel of Italy and dashes north for a final week in the Alps. These Alpine passes are legendary roads to ride but to watch the Giro is to get a false lesson in psychogeography: you risk mistaking Italy for a mountainous and snowy land shaped by glaciers.

Instead the Alps form Italy’s northern border, a frontier rather than a heartland. With the Giro visiting the Apennines this weekend, time to celebrate the Italy’s central mountain range. 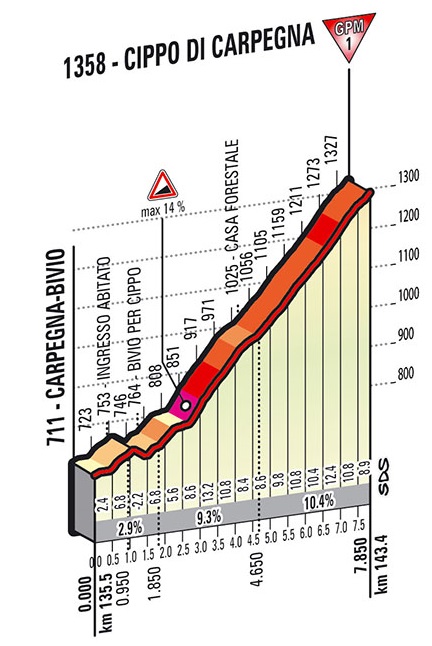 The Route: Monte Carpegna is a mountain but its shape resembles a long ridge and there are several routes to the top. But there is one special road reserved for cyclists. It starts in the town of Carpegna. The Via Cippo and heads north, straight to the mountain. Look for the tourist signs signalling “Cippo”. It is 7km long and climbs at an average of 9% to reach 1,358m above sea level.

The Feel: Italy has thousands of charming towns and Carpegna isn’t one. It has a functional feel and invites two questions: what do the people do here and where’s the way out? It’s not hellish, just unremarkable.

The start is discreet. The Via Cippo heads north – feel the sun on your back – but there’s little indication of what lies ahead. A garden hose ran across the road to irrigate a vegetable patch, presumably the owner didn’t fear much traffic. The early part is gentle, a big ring spin past meadows with the mountain looming high above and you sense the easy road now will only mean a steep grade in a moment.

Then comes a large Pantani sign signalling this climb’s celebrity status… quickly followed by a warning of 15% gradients. The road enters woodland and the steep sections start. It’s hard from here on. Normally you’d be suffering alone but the road becomes a tribute to Pantani, Merckx and others: part museum, part art installation. You see a billboard-sized mock-up of a newspaper commemorating Eddy Merckx’s triumph. Grind up further and there’s a large memorial in the shape of Pantani made from wire, as if from twisted coat hangers. Every few hundred metres the road is painted Il Carpegna Mi Basta and signed with Pantani’s autograph.”The Carpegna’s enough for me” said Pantani. Not for him mountain stage recons nor Tenerife training camps. The myth goes that Il Pirata was an artisan honing his form in the local hills… but of course we know he is performances were reliant advanced pharmacology. 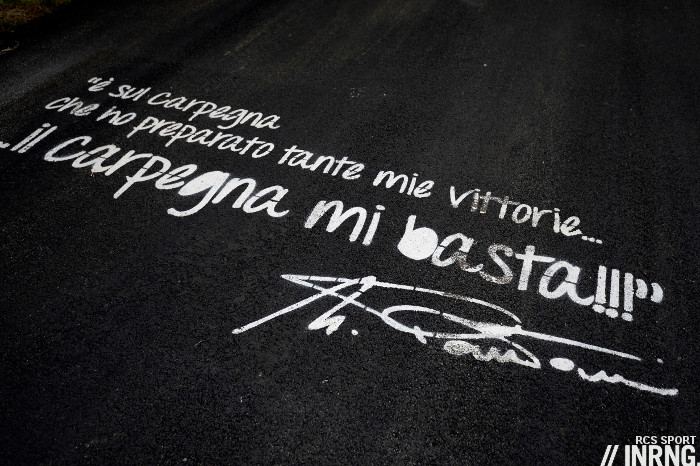 Heavier riders might think “Carpegna’s more than enough” given the slow progress. Each inscription takes time to reach thanks to the consistent 10-12% pitch and on a rough and narrow road too, it’ll have everyone reaching for their lowest gear. Kindly much of the road is in the shade of woodland. You’ll pass a forestry hut and after here the road is restricted: bikes only. At times the foliage obscures the view making progress hard to gauge although the road opens up in places to reveal the drop below. Signs slowly count down the progress as you pick your way past more Pantani quotes and newspaper billboards. Little did Pantani know that a quip about the mountain would launch a tourist industry. It’s great to see an otherwise ignored road turned into a destination for cycling, especially because this is a road reserved for cyclists rather than a highway to be shared with coaches, revving motorbikes and others. Yet you sense Pantani came here to escape yet now everyone comes here to get a glimpse of him. You can descend back to Carpegna by following the road around to the west, a more suitable way back down the mountain.

Cippo? The climb might remember Pantani but the Via Cippo has nothing to do with Mario Cipollini. Instead a cippo is a large stone, it can be a milestone or a headstone on a tomb. Here it’s a monument built by fascist dictator Mussolini to a family member. 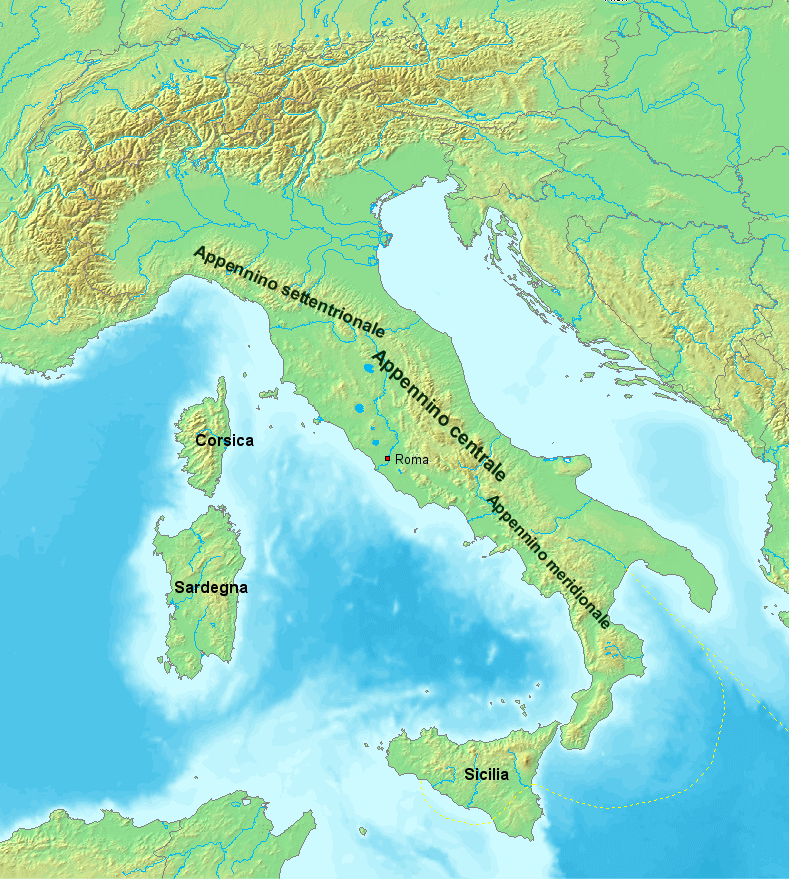 The Alps form Italy’s northern borders. A young country, the mountains make an obvious geo-political frontier but these mountains are exclusive to the north. By contrast the Apennines run north to south, a spine running down Italy’s back. They vary in height with the Corno Grande, in the middle of the Central Apennines, topping at 2,912m above sea level.

Monte Carpegna is only one climb among many. Reach the summit and you can see Monte Catria and Monte Nerone in the distance. These two are notable climbs and if the Pantani tribute isn’t your thing you will find splendid isolation on these and other climbs. They were used for a stage of the 2009 Giro. 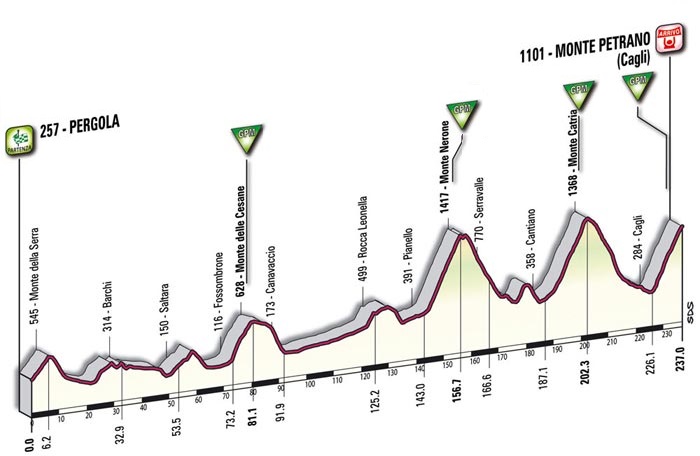 A stage of the Giro? Not just any stage but a very tough mountain stage. To top it off the 2009 Giro was the 100th edition and the route is marked by plaques and commemorative statues. All these climbs are tough, what they lack in high altitude is made up by the relative low level starts and rough roads whose granular surface robs speed.

A Giro without the Alps?
With these climbs and many more – Blockhaus for example – it begs a question: could we have a Giro without the Alps? Yes in the sense that you could have a great race packed with selective mountains. The Appenines offer tough climbs that are awkward with forever changing gradients. The Trafoi hairpins on the Stelvio look fantastic but they’re engineering, a means to level the mountain, to regulate the ascension. But if the racing is great it’s unlikely for boring reasons: money and logistics. The Apennines are often deserted while the Alps have large ski stations that crave the publicity brought by the Giro and with these resorts come plenty of hotels. Central Italy by contrast is more spartan, there are ski resorts for locals but it’s all on a much smaller scale.

Besides why skip the Alps and all those great roads? But it does seem the Alps hog the limelight and collectively cycling fans can skip the Apennines.

History
As riders are reminded during the climb this tiny road has a big place in cycling legend. Eddy Merckx – who else? – won here in 1968. But he also lost and in 1973 Spaniard José Manuel Fuente put the Belgian to the sword on this climb although Merckx duly crushed El Tarangu later to reclaim the lead and restore order to the world. It was climbed again in 1974 and then in 2008. Note the video below from 1968 is not the same Cippo road, the Giro scaled Carpegna but by another, wider road.

The race has returned on other occasions and in 2008 we had a Pantani tribute with Stage 11 resembling a Pirate training loop.

Travel and Access
It’s remote but not out of range. To the west Florence is not far away although you need a hire car rather than a ride – and many tourists are drawn to the Adriatic coast and resorts like Rimini. The nearby city of Urbino is a good pick for tourists offering castles, monuments and museums and plenty of roads for the visiting cyclist from gentle loops to Monte Carpegna.