Who Can Break The Hour Record?

Who can break the hour record? Tony Martin? Bradley Wiggins? Fabian Cancellara? Taylor Phinney? All four can do it but the record is now open to hundreds of riders around the world. Chile’s Carlos Oyarzún can probably do it.

How so? The UCI announced a change of the Hour Record rules last week. There are two conclusions. First a rider can use any approved UCI track bike complete with tri bars, disc wheels and clothing rather than the classic “Merckx” bike with drop bars and low profile rims. Second the hour record has been re-established at 49.700km. Roll up, roll up.

Of course a comparison between a road time trial and the track involves plenty of caveats. The Firenze TT course included a a hill, it was exposed to the wind and riders were braking for corners as they rode through the city centre before the finish. The point here isn’t to make a direct comparison, it’s just an illustration.

Still, scroll through the results and, say, Carlos Oyarzún managed 49.2km/h. It’s easy to imagine a flat velodrome being worth an extra 500 metres and he could get the record.

Easy? Certainly not. A fast time trial on an ordinary day is no gentle spin but the track imposes extra constraints. The G-force of lapping the boards at speed puts extra pressure on the contact points and strains the arms and legs. It’s said the centrifugal aspect reduces blood circulation, a giant blood spinner. But everything else being equal the track is faster than the road. It’s flat, a controlled environment, low rolling resistance, no wind and if you turn up the heating and adjust the humidity, reduced air resistance.

Then and Now
The UCI has reset the Hour to 49.7km which is held by Ondřej Sosenka. Crucially he set this on a classic bike with drop bars, steel spoked wheels with low profile rims and a basic helmet. Tomorrow’s record attempt allows a rider to use any UCI approved track bike meaning a pursuit-style bike as pictured below is permissible. This brings a huge advantage as it allows a time trial position with the “tri-bar” extensions but note the other benefits include disc wheels, profiled frame tubing and the use of an aero helmet with visor. As well as improved aerodynamics the position can bring ergonomic gains because the arms and upper body have some support from the arm rests and the rider doesn’t have to hold themselves in a low position. All in all being able to use the new bike means a quick adaptation from road to track and brings a substantial performance advantage. Sosenka’s record is there for the taking. 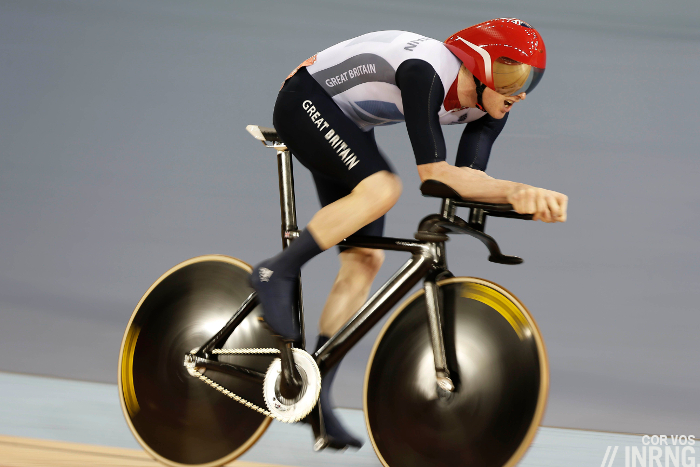 Tournament Theory
If anything the biggest problem is tactical and commercial. There could be a scramble to break the record because the first to break it stands to win plenty of publicity. But rush the effort without too much planning and preparation and you could set the bar low meaning someone else can come along and improve it. A bike sponsor could have ads in the cycling press vaunting the wondrous aero benefits of its record breaking machine only for another cyclist on a rival bike to break the record.

This is a problem for riders, teams and manufacturers. If the Hour were to become a tournament with a series of riders lining up to have a go then all the better for cycling fans. There is the concern that if a rider we’ve never heard of pops up and breaks the record then somehow a little bit of prestige is lost, as if a champion must validate the record to perpetuate its noble status. But the unknown Graeme Obree emerged in 1993 to spark a series of record attempts.

Conclusion
The UCI’s rule changes are a clear invitation to riders to come and have a go. Being able to use a modern bike to beat a record set with the old position means many find the record with reach. As the results from the worlds last year illustrate -but don’t prove – many can ride at 50km/h on a flat course in the open wind. Perhaps the only question is who goes first?