The second of two selective Apennine mountain stages, today’s stage has a different feel with wider, more accessible roads. Today should be easier. A lot of action but we didn’t see the stage winner Diego Ulissi until the final 90 metres. An early break included Trek’s Julian Arredondo and he attacked on the Pantani section of the Monte Carpegna. On the descent – which included netting to recover riders who crashed – Pierre Rolland took off in pursuit. It looked wasteful but it worked as he reeled in Arredondo. But the stage reserved the steepest roads for the finish and he was caught and passed on the final ramp. Cadel Evans leads the race now and by almost a minute on Rigoberto Uran in second place, a comfortable margin for now. The contenders preferred to mark each other yesterday so we should be doubly grateful to Arredondo and Rolland for the suspense they supplied. Yes another wasted effort from Rolland in terms of results but let’s salute him. Otherwise the action would have amounted to two short attacks from Rafał Majka and Fabio Aru. The only surprise was Michele Scarponi’s trouble but his injuries have got the better of him. Scanning the body language Nairo Quintana looked comfortable. We should remember Ag2r’s mountain train leading the pursuit. Yes, let’s say it again: Ag2r were setting the pace in the Giro’s lead group. New recruit Alexis Vuillermoz is proving to be an excellent hire and (self-trumpet) was tipped as one of the best Sojansun riders to hire last year. QED.

A note on the TV broadcast. It’s never easy but the on-screen graphics displaying the time gaps were sometimes wrong and often absent, as if they’d been pulled by the producer because they were wrong. Also they kept showing the gap between Arrendo and the Gruppo Maglia Rosa but Michael Matthews was so cooked the time gap was irrelevant. What mattered instead was the gap between Rolland and the Evans group but info on this was rare.

The Route: a short day at 172km. The first 100km are flat, skirting the Po plains and the city of Bologna along the Via Emilia, an old Roman road. All change after 110km as the road heads into the hills. Up a river gorge and then the first climb after Osteria Vecchia, a gentle lift at little more than 4%. The next climb to Rocchetta Sandri is steeper at 5-6% but still a warm-up for what’s to come.

The Finish: the final climb can be broken into three sections:

The Scenario: after several efforts today should see a breakaway rewarded. The early terrain suits a move and the subsequent hills allow a group to make collective progress, they’re fast to enough to reward “through and off” even on the climbs. Besides who will chase? Obviously no sprint teams and BMC won’t waste energy on chasing hard as long as the break has riders well down on GC because

Will the GC contenders make a move? I’d like to say yes but suspect not. The steep section from Sestola to Pian del Falco could reward an attack but climbers will fear moving because others will churn the big ring during the final 4km to reel them in. We’re still in the discovery phase of the race with riders

The Contenders: nobody is getting five or even four chainrings because of the high probability of a break sticking and it’s hard to guess who’ll get away. Diego Ulissi is default pick because if the move is reeled in he’ll enjoy sprinting from the reduced group. I think Cadel Evans is in the same position.

Katusha rocket Dani Moreno usually thrives on the uphill finishes but went too early yesterday; he could fix this today. Trek’s Robert Kišerlovski was strong yesterday and could pounce again. Otherwise if the break goes, two random names for you. Lotto-Belisol’s Adam Hansen has the big engine and is climbing very well while Astana’s Paolo Tiralongo was on duty yesterday to shepherd Michele Scarponi and could thrive today but take your pick from many more.

Weather: a sunny day with a few clouds in the hills and mountains and temperatures of 22°C in the Po plains. Translated this means a pleasant ride with no tactical impact.

The finish is forecast for 5.10pm Euro time. Be sure to tune in for the final climb from Fanano from 4.30pm onwards but watch earlier to see the race develop and the scenery unfold. 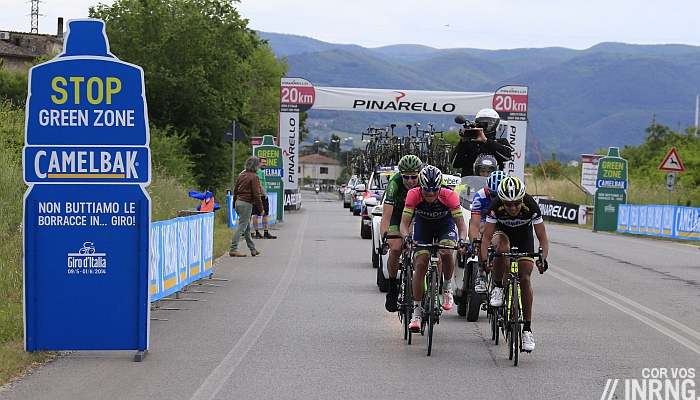 The Green Zone: riders with waste in their pockets have dedicated zones to sling bottles and used food wrappers. This is then picked up by workers and disposed of. The idea is to concentrate the waste in one area rather than having riders slinging trash all over the Italian countryside.

It’s a good example to set. A ride in the Italian countryside is invariably enjoyable but you will often spot copious amounts of waste in the grass verge. Drinks cans including many countless Esta Thé cups – official drink of the Giro – litter the roadsides. If Italian roadsides are notable for the junk the pro peloton can litter worldwide with riders dumping gel wrappers to the point where if you ride the route of a major race the day after there’s no need for GPS because you can follow the birdseed-style trail of used energy products. These zones are a good start but the cultural change has some way to go.