Roads to Ride: The Stelvio

As part of a series to explore the famous roads of cycling, here is the Passo dello Stelvio in the Italian Alps. The idea is to discover the road and its place in the world, whether as part of cycling’s history or to look at the route on a day without racing and it is open to all.

The Stelvio is Europe’s second highest paved mountain pass but superior in legend to the Col de l’Iseran thanks to history, pedigree and the sheer experience of climbing and descending this giant.

The Route
The Passo dello Stelvio is 2,758m above sea level according to the large sign at the top. There are two main routes to the top and a third via Switzerland and the Umbrailpass.

The SS38 goes from Bormio on the west to Ponte di Stelvio on the east via the pass. Each side offers a similar experience being 22km from Bormio at 7.1% and 24km from Ponte di Stelvio at 7.4%. But the Bormio side offers more variety, a flat section 5km from the top and 12% for most of the last two kilometres. The Ponte side is regular and the carefully placed Trafoi bends are a work of engineering. Is there a better side to climb? Both offer something but the Trafoi bends on the Eastern side are the “must do” experience plus you avoid the narrow tunnels on the Bormio side but ideally you don’t want to choose, you want to try both approaches.

The Feel
This is a long climb, I cannot find the record but either side requires 75-90 minutes in the Giro so you’ll probably need 90 minutes, perhaps two or even three hours.

Daniel Friebe’s bible “Mountain High” quotes Fausto Coppi saying he thought he was going to die, former Italian champion Marco Pinotti labelled it “ascetic” while Friebe himself calls it a “treat” and “spiritual.” I’m with Pinotti. This is a climb that is romanticised by journalists and rich in history but when ridden it’s more grim treatment than a treat. Yes the scenery stuns but the higher you go the more the mind is numbed by the cold and the dwindling blood sugar, plus the altitude extracts a usury interest rate on your oxygen debt, any anaerobic ambitions risk default. It takes a long time to reach the top and when you do make it the mind is on the descent and your clothing, damp with sweat. It’s hard. 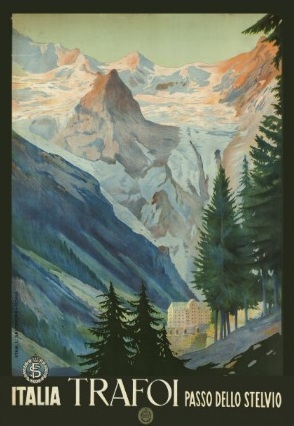 Still, the Trafoi bends are special. Imagine looking at an image of Alpe d’Huez on a tablet device and then spreading your fingers to stretch the image vertically and you get the idea, this climb makes you crane your neck like a tourist in Manhattan. The Eastern side has 48 hairpin bends and these are concentrated above the village of Trafoi when the road leaves the natural course of the valley to snake up the wall of the valley, quickly rising above the tree line. You can admire these bends for the engineering and quietly thank the constructors who ensured a regular gradient – and the road has been revised to make it even more even, you can still see the old route in sections – unlike many other Italian passes. But it’s relentless, the bends hang high above and seem so far away. This side also has the Piccolo Tibet mountain refuge. Built in 1959 by a mountaineer it might sound eccentric, but no, you really are so high up amidst a rocky landscape with glaciers hanging around that this does feel Himalayan. The remote feeling is quickly forgotten at the summit where shops and restaurants crowd the top, the satisfaction of reaching the pass is there but spiritual pride has to compete with the garish market forces.

The Bormio side is different. Engineered too, but instead of climbing up the mountain, at times it goes through it with a series of tunnels. In the past these were scary even to climb because they were dark, wet and narrow and traffic, including descending cyclists, didn’t always spot the rider climbing. Plus there’s the acoustic effect where even a small Fiat sounds like the truck from Spielberg’s Duel. The good news is that these have been upgraded with lighting which makes all the difference. But the other sections are calm and scenic and worth the effort. Both sides now have wooden signs that count down the hairpins remaining to the top.

The Stelvio is not just a climb but a descent and one of the best in Europe. However, be prepared for the cold. The height and isolation of this road means it is perpetually cold and warm temperatures are rare. Indeed even before climbing be sure to check the weather report in case the clouds come in because having to ride down in the rain without sufficient kit will be miserably unforgettable.

The Pass
The pass marks the point between three borders. It is the point between the regions of Lombardia and the Trentino-Alto Adige/Südtirol. But the pass also sits next to the Swiss border and can be reached by the Umbrail pass which joins the Stelvio just a few hundred metres below the pass.

The Giro
Fausto Coppi was the first to the top in 1953 in a race winning move. There’s a monument to him on the climb and the high point of the Giro is called the Cima Coppi, the Coppi summit. The images of him climbing in between walls of snow live on today and are often recreated when the race passes in modern times.

The race returned in 1961 when Charly Gaul, perhaps the greatest ever climber, won after descending in to Bormio. It’s been used sparingly since and in recent times the Giro has held the stage finish on the summit to literally heighten the importance and drama. That said this is as much a descent as a climb and in 1980 Bernard Hinault and Jean-René Bernaudeau went wild with the unlit tunnels to rip the race lead away from Wladimiro Panizza on the road down to Bormio. Ivan Basso fared worse. Leading the Giro he fell sick and lost 42 minutes on the climb. Yes forty two minutes. It only reminds us that if the Stelvio consecrates the winner it is fiendish for the others, a graveyard of ambitions.

Cancellations are a feature as much as participations. The cold weather means snow and the race has been prevented from crossing in the past and it almost happened in 2012. In 1984 Laurent Fignon was ready to ambush Franceso Moser on the big mountain stage but the organisers cited poor conditions only the Frenchman protested and claimed it was a ruse to help home rider Moser win the race. Fignon seems to have been vindicated by journalists who drove over to verify the climb but over the years this climb has not been a regular in the Giro.

For all its fame and status the climb has been used sparingly with only 12 appearances between 1953 and 2017.

On a normal day
Things are never normal at 2,750 metres. Snow means the road is closed for half the year and opens in May, otherwise it’s accessible by ski lift as part of the Ortler ski area. The road season is really from late May to early October. Once you get into June the pass welcomes of cyclists testing themselves on this special road. Many are Italians but there’s a large share of Germans too riding brands you don’t see elsewhere, like Simplon or Red Bull. The Germans don’t just come to pedal, most seem to ride this by motorbike and the valley echoes to the roar of unrestricted sports bikes as their riders exploit the hairpin bends. This can frustrate, the road is open to all and no doubt locals get sick of cyclists weaving up the road and pretending to be a falcon on the way down but the motorbikes do go fast and spoil the mountain peace. Many motorists also drive up for the view and many eye the cyclist with curiosity: why did you ride up? 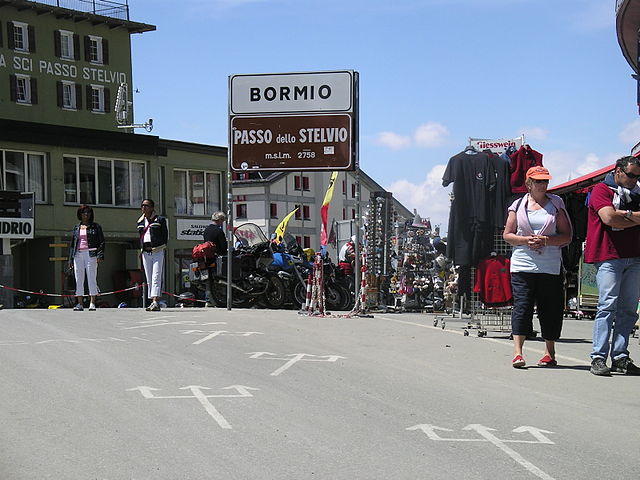 Unlike the higher Col d’Iseran (2,770m) which is topped by a little more than a sign, a chapel and a boast, there’s plenty going on at the top of the Stelvio. Having climbed through emptiness the top is a surprise. It’s crowded and you might feel like plunging down the other side to avoid the crowds. You’ll find restaurants, souvenir shops and you can even stay the night in one of several hotels although at 2750m a good night’s sleep is unlikely: expect to find curious travellers and hypoxia-hunting athletes. Strangely there’s also a bank, a novel take on high finance. Next to the bank is the Stelvio museum which tells the tale of the pass, from bronze age to concrete age and the construction of the road.

Say Cheese
Say Stelvio to many in Italy and they’ll say formaggio because it’s a type of cheese commonly sold in supermarkets across Italy. Stelvio DOP is also known by the German label, Stilfser and the Stelvio pass is also known by its German name Stilfserjoch although cycling speaks Italian thanks to the Giro so it’s always Stelvio for us.

As mentioned above the pass is on the border of the Trentino-Alto Adige/Südtirol region, a semi-autonomous part of Italy where the majority of the population speak German first and Italian second and the Stelvio has played its part in history. It was first built because the Austro-Hungarian empire controlled Lombardia and needed access across the mountains and after years of work it was opened in 1825. Later Lombardia returned to Italy and the pass marked the border between Italy and Austria. But the climb today is firmly Italian on both sides even if the Südtirol area is Germanic in tone.

Access
Bormio is your best bet. The piece above has concentrated on the Eastern side but Bormio to the west offers the best location although reaching Bormio is not easy as it’s 200km from international airports like Milan. But it’s a place to explore the Stelvio and other passes are within reach: Aprica, Tonale, Gavia, Mortirolo: it’s like choosing which dentist to visit. Certainly there’s a choice to intimidate almost every day but also the chance to make a vertical exploration of cycling’s history.

As well as location, timing matters as the weather needs to be good. Don’t go before June as the snow is a risk. There’s usually a day in August when the road is closed to all traffic except cyclists.

Bormio is scenic enough and has many cycle-friendly hotels with safe storage for your bike. Look for a family-run place and be sure to dine on pizzoccheri which are squares of wholemeal pasta and bresaola, cured beef sausage that’s sliced finely, a rich source of iron to help you cope with the mountains above.

If the Stelvio is a legend then next week a myth from Tim Krabbé’s book “The Rider”: Le Mont Aigoual. Only it’s not fiction but a real place that has hosted the Tour de France and other races.. More roads to ride at inrng.com/roads

Main photo with permission of ski-epic.com