Many famous bike races are over one hundred years old. Liège-Bastogne-Liège was first run in 1892. These events have developed legends and histories that go a long way to make the sport what it is today. But the Strade Bianche race this weekend can trace its history back to 2007 yet it feels like a classic.

With new races springing up around the world what can the instant success of this race tell us? Or is it dangerous to wallow in nostalgia?

What’s made this race such a success? It’s the same question as what makes the race a must watch this weekend: a quality field race over tough roads that provide stunning scenery before a majestic finish in Siena. The hilly route is selective and allows classics contenders to compete alongside a few hardy stage race specialists. It works well on TV and arguably better in the photos afterwards.

“A man who has not been in Italy, is always conscious of an inferiority, from his not having seen what it is expected a man should see”
Samuel Johnson

Johnson’s quote is valid today for cycling fans immersed in the mythology of the sport. Obviously unable to use the great Alpine passes that contribute to the Giro’s legend, the Strade Bianche exploits Italy’s rural connection. The hilltop towns, the cypress trees and other cues come straight from the tourist brochures and make this a region to ride whether in a race, a training camp or a touring holiday. Indeed one overlooked factor behind the success of the Strade Bianche is its organic growth. It grew out of the Eroica vintage gran fondo. Rather than being imposed from the top, it borrowed on an existing event and recognition, visit the region and all year round there are brown road signs that signal the route of L’Eroica. 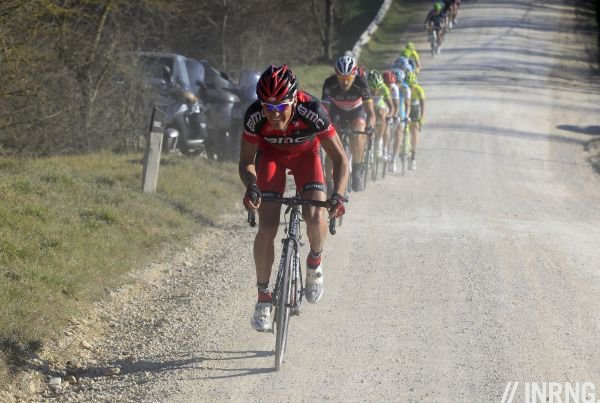 The Eroica’s location is no coincidence either, much of Italy has sterrato gravel roads but the Eroica is run in Tuscany, a hotbed of Italian cycling which produces a disproportionate share of the country’s professionals and races. This provides a cultural root onto which a pro race can be grafted, something that can’t be done in many other countries.

Another reason for the race’s success is boring practicality. Central Italy typically offers mild weather in March and the offroad sections mean skills practice for the classics. It’s also held before Tirreno-Adriatico race so teams need only need fly in earlier. Plus the race is run by RCS which means money in both directions, the company may pay teams to start but others want to impress the Giro organisers in order to secure wildcard invitations. Finally it’s on TV meaning an extra draw for teams and sponsors.

Copycats?
Tro Bro Leon is a similar example but on a smaller scale. It’s probably the best race you might not have heard of. It began as an amateur race in the 1980s and exploits the ribins or ribinous in local dialect, these are gravel roads and farm tracks. Sounds familiar.

But it’s status is inferior to the Strade Bianche. Part of this is down to money but for me it comes after the cobbled classics so the anticipation is reduced. It’s only live on local TV and its location in Brittany means a long journey for some even if this is another hotbed of cycling. Plus there’s no historic finish. Still this is an exciting race that’s growing.

Does this mean a great race has to use tiny roads? If dirt roads become the norm then we take them for granted. There’s a risk of inflation here where competing races start to outbid each other for infernal roads and the sport becomes a circus. But the sport is concious of this, see how ASO and RCS use the pavé and strade bianche sparingly in their grand tours.

Copy and paste
What can a new race take from the success of the Strade Bianche?

Note that a new race can be anywhere. We might think of the Dubai Tour but it can equally mean the World Ports Classic in Belgium in “Old Europe” or one of those new races in Britain, Germany or the USA that steal the term “classic”. It’s almost as if a new race is ashamed to be new.

The race for nostalgia
But what if the retro aspect is a negative? Cycling often trades on its nostalgia and Italian cycling especially. But reviving images of the past and citing the names of old champions might excite senior citizens who can revisit their glory days but it only makes cycling look old fashioned.

A new race is great and if it doesn’t have heritage, it can find other means to exploit. It could be a giant prize pot to attract star riders or an investment in high quality TV production. The slot on the calendar for Dubai, Qatar and Oman works well because they form the early chapters of the classics season. Remember too that all the big races today were novel once upon a time and they represented modernity and embraced the future with the bicycle as a modern means of transport.

Change
But the sport doesn’t have to choose between a sepia past and a digital future. The Greeks told the tale of the ship of Theseus, where over the years the deck timbers were replaced, new oars were bought and so on. In time the whole boat had changed but it was still Theseus’s ship. The same goes for today’s races, the Milan-Sanremo has seen numerous course changes and the route of the Tour de France is increasingly designed for television audiences. Many races survive precisely because they change and adapt to the times.

Conclusion
The Strade Bianche is an instant success and has become a must-watch race that’s exciting and almost as prestigious as many a race from the nineteenth century. This weekend sees only the eighth edition take place but it feels like an established classic. Note that as much as it feels permanent it’s future is uncertain as RCS struggle to make their portfolio of races profitable. Past sponsor Montepaschi Siena, a bank, stopped sponsoring the event and if fans have embraced the race, it’s not yet imprinted in Italy’s collective sporting culture.

Its success is a lesson for all but it seems hard to replicate. Select geography, scenic roads and a rich history of cycling gives this race more than a head start over other new races. Other races could copy the formula but the risk is a stale replica, an instant risotto that won’t satisfy. Not every new race can or should look to the past. A new race in Dubai, Russia or Argentina cannot compete but it could learn and copy some aspects. But the Strade Bianche’s near-instant success and suitability seem almost unique and hard for everyone else to copy.