If a bike race is “first a tale of geography” there might not be much of story to tell from the Ladies Tour of Qatar and the men’s race next week. The stages proceed through a desert with few features and tactical points, just a road wide enough to land an aircraft. Even when people are watching the race, half of them have a bemused look, the same as Parisians watching a handicap camel race on the Champs Elysées.

But all this makes the racing unique, a minimalist form of the sport. Racing 101.

Many domains have mass appeal and nerdy niches, think blockbuster films and arthouse cinema; Nescafé and gourmet roasted beans, McDonalds and molecular cuisine. Cycling has the Tour de France but what if racing in Dubai and Qatar is an acquired taste? As comparisons go perhaps it’s a functional experience rather than the work of an artist carefully framing their scenes or blending aromas. If the Tour de France is a Bollywood extravaganza with noise, colour and a cast of millions, the Tour of Qatar is an austere stage play or a Lars von Trier experiment with Dogma 95 rules – no make-up, lighting or special effects. Even the cast is reduced, there are no extras behind the crowd barriers to add to the scene. Sandbox testing
Or swap arty comparisons for the language of computer programming. These desert races are literal sandboxes where teams can test themselves in the same way programmers try out new code without crashing the system. We’ll see Mark Cavendish and his Renshaw-Petacchi sprint train has a functioning script and it can tested on wide roads with few junctions. Gone are the disruptive narrow lanes, steep bergs and the street furniture assault course.

But the purity of the experience is a problem too. Hardcore fans might be ecstatic at the echelon formations and salivate at the sight of competing sprint trains running at full speed without a bend to line out the bunch… but the casual viewer can be bored rigid. An hour of TV can bring 50 minutes of nothing save a group of cyclists riding through-and-off, an endless animated GIF. Should a crosswind shred the bunch there are no trees to illustrate the force of the wind, just a diagonal row of riders, a peloton parallelogram. Today’s time trial in the Tour of Dubai was a time trial reduced, boiled down to the basics. The aero helmets, disc wheels and low profile frames were gone with the wind as riders rode trad with standard road bikes. Ironically for such a wealthy race this rule is about economy and saving teams from flying out a bike for 12 minutes’ use. But look closely and there were mods like adjusted stems and larger chainrings.

Petrodollars
The geography isn’t promising for a race it’s the geology that has brought the pro peloton here. Vast oil and gas reserves ensures Qatar, Dubai and to a less extent Oman can have their slice of big time racing. If the landscape doesn’t impress, the cityscape does. And if you’re not tempted these race is just part of a busy calendar of events; shoppers in Dubai get the vibe that something is on.

The exception is the Tour of Oman which features the Jebel Al Akhdar, the Green Mountain, as a genuine summit finish and has other hilly roads. But if you have the money you can put on a sports event to tell the world you exist – see Sotchi. 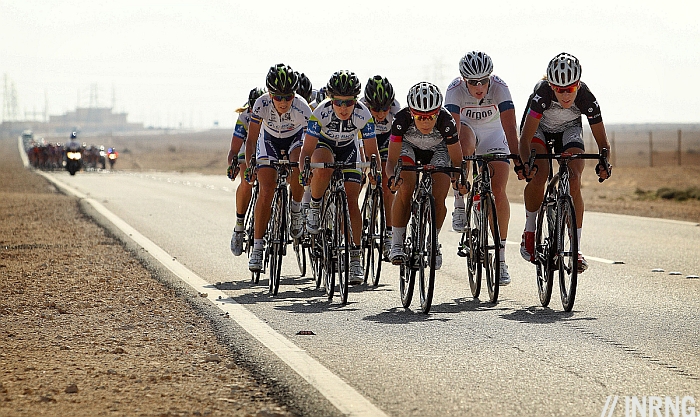 Conclusion
Desert races and deserted urban finishes. No amount of marketing can say these races are bigger or better than Het Nieuwsblad, Paris-Nice and Milan-Sanremo. Surely even a giant prize pot couldn’t change this. But these desert races shouldn’t be ignored as they offer a fascinating look at the pro peloton: the race reduced to riders, tarmac and maybe a crosswind. It’s both Racing 101 and a connoisseur’s choice but it doesn’t have to be a study of craft, scan the results this week and you’ll start to see the names who will feature in the classics to come.