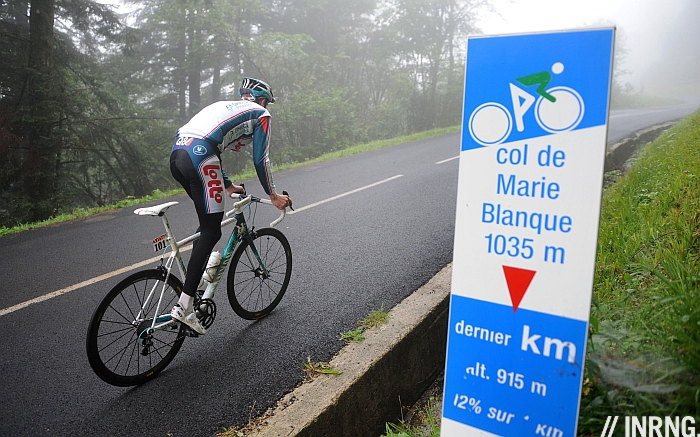 A scenic road borrowed many times by the Tour de France, the Col de Marie Blanque will often tempt many cyclists visiting the Pyrenees. But there’s a difference: it’s much steeper than your average Pyrenean pass, a fact that’s ruined the day for tourists and Tour riders alike.

The Route: 16km kilometres south of Oleron St Marie the D294 starts in the village of Escot and heads east towards the col and then back down to Bielle. The road can be ridden in both directions but here is the western face, picked because of it’s unusually steep flanks. 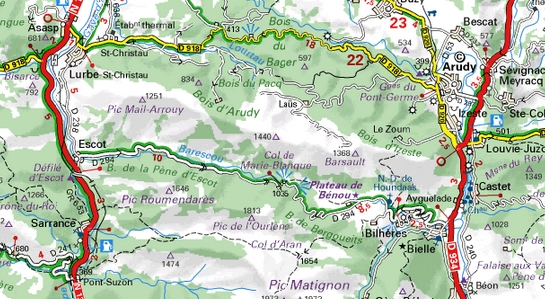 The Feel: the road proper starts in Escot and the signposts show the way. For once the metal signs are helpful because there’s little at first sight to suggest a mountain pass awaits, the small Barescou valley looks gentle with meadows sitting below soft flanks. There’s little traffic and a tourist sign declares you’re on the Route du Fromage, the “Cheese Route” which only adds to the soft lethargy, the confluence of lipid and limpid. The road rises a little but it’s all so gentle until you reach the sign for a campsite and suddenly the road kicks up. What was easy is now hard as the slope bites at 12-13% and stays that way for over three kilometres on a long wooded section with few curves. It’s steep but regular, get a rhythm going and hold. There are signs to indicate what’s happening but they’re almost not needed as you only need look up the road to see what’s coming. Look close at the road and you might spot scuff marks from worn plastic and metal cleats from those who were forced to walk up. The top is obvious, a hairpin signals the final ramp and then the road arrives on the Plateau de Benou.

Many passes resemble a saddle on the back of a horse, you climb up one side and then roll down the other but this is different, there’s only a short descent before you cross the plateau, a calm area with wide flat roads and meadows bordered by trees, if it wasn’t for the ridges you could be riding across Normandy. 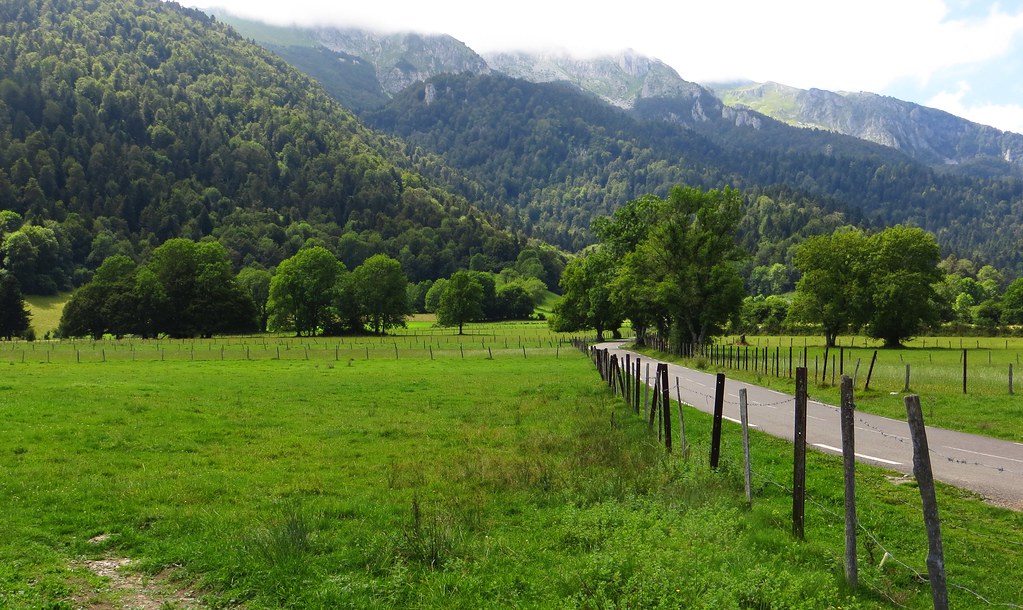 Pointless Pass: many famous mountain passes have been vital transport links and strategic military points, linking two large valleys together. But the Marie Blanque isn’t one. Just five kilometres north of the east-west axis is a parallel road that allows you to cut across for a lot less elevation. But all the better for cyclists as it means the Marie Blanque has less traffic.

“This is just the mountain I don’t cope with very easily and it seems to defy analysis”
Bradley Wiggins, 2010 Tour de France

Tour de France: the race has passed 14 times. If the Pyrenees were the start of high altitude racing this one is a relative newcomer to the race with its first inclusion in 1978 and it wasn’t used again until 1986. Perhaps this was because it helped ruin Bernard Thévenet’s chances. The Frenchman had won the Tour in 1977 and was back the next year but ground to halt on this climb and needed a back wheel with a 24 sprocket.

Gearing: don’t be a Bernard and come with the wrong gear. The correct gear cannot be recommended, no more than this blog can recommend shoe sizes. The Marie Blanque is not Monte Zoncolan but it’s significantly steeper than everything else within range. But whatever you take to the Pyrenees, take something extra for the Marie Blanque. Failing that, you have two choices, hit the climb hard and force your way to the top. The other is to start the day  with some old socks and be prepared for a long walk.

Name: there are vultures in the Pyrenees and this climb takes its name from the Egyptian vulture with its white plumes. Daniel Friebe’s Mountain Higher suggests it was named after a deranged women with pale skin. In both cases the blanque is derived from blanc or white.

Travel and Access: Pau is the nearest city and a fine place although it’s a little from from the Pyrenees to work as a base for a week. But the Marie Blanque is within riding distance south of here.