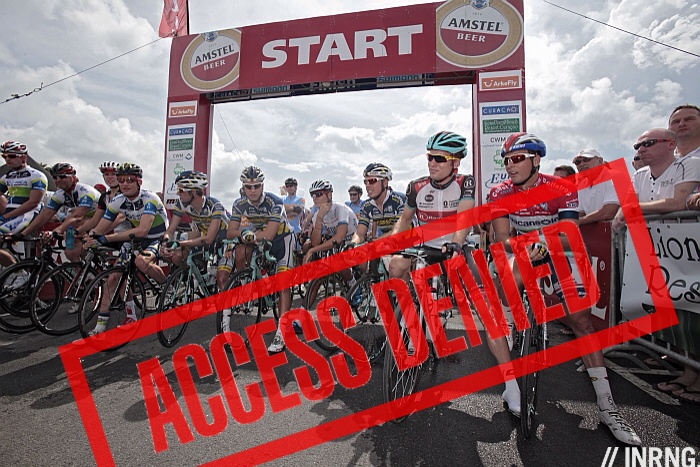 The years go by and the story remains the same. Loyal readers will remember the subject of “forbidden races” from before, namely events run outside of the remit of the UCI and its member national federations. Such events include many US mountain bike events, French road race, English time trials and more. Under the UCI rules anyone caught taking part in one of these events gets a ban and a fine.

The rule had existed for years but like too many sections of the UCI rulebook, it was ignored. Until this time last year when the UCI ordered national federations to start enforcing it only to get pushback, especially from the US when it was pointed just how many cyclists it would annoy. Within weeks it was decided that instead of enforcing the rule, the rule would be suspended. Now the UCI has quietly confirmed the suspension continues into 2014. It’s good news but still bizarre to see the UCI announce it won’t enforce its own rules.

A national federation may grant special exceptions for races or particular events run in its own country.

Races not included on a national calendar might include an Italian gran fondo, a French road race run by UFOLEP, an English Time Trial or a US MTB race run outside of USA Cycling as well as a Dutch fun race held in the Caribbean as pictured above. In theory anyone riding these unsanctioned events and also holding a licence with their national federation has to be punished… in reality it’s been ignored.

Why it matters
Just because it’s ignored doesn’t mean it’s irrelevant. There are two strands to this.

In short, it’s a rule that cannot be applied and upheld satisfactorily. Once the rulebook turns into an à la carte menu where participants pick and chose the sections they like then it becomes a free-for-all. One country will enforce one rule only for another to get casual and in no time the governing body loses its authority to govern.

In defence of the rule
You can see why the rule exists, or at least how it came about. The UCI and its member federations have interests to defend and act as the de facto governing body complete with missions from selecting a national team to coaching kids and plenty in between. Seeing a private promoter cherry-pick a profitable criterium series is bound to annoy. It’s also the case in several major European countries that the national federation is recognised in law as the go-to body for running the sport and by extension rogue federations are not backed up by law and maybe don’t have the statutes, insurance and other protections.

The solution
Scrap it. The UCI could explore means to continue with the rule for elite riders and professionals, for example to have some leverage over professionals who might fancy joining a breakaway league. But the risk here is that the UCI couldn’t do much anyway and it could even find itself in front of the courts for restrictive practices that contravene Euro employment laws.

Audit
Deleting this rule should only be the start of a process. The UCI would do well to have an audit of its entire rulebook to discover all the other rules that are ignored and the second order problem of ambiguous wordings that confuses some and could be debated one day in court. Because in both cases ignored or confusing rules just undermine the rulebook and by extension the UCI. A governing body is nothing without its rules.

Conclusion
The UCI should be delighted to see anyone riding a bike and then taking the next step of pinning a number on their jersey or tying a timing chip in their frame. Riders who take part in local races outside of the UCI-National Federation umbrella shouldn’t be punished for riding a local race and in reality they won’t be so the rule exists on paper and PDF but not in the real world. A governing body is only as good as its rulebook and selective enforcement creates problems so surely this rule has to be scrapped. But this should just be the start of an audit for the whole rulebook as there are many other rules that exist only on the UCI website and not in practice.