It was acceptable in the 80s – Part II

The 1980s were a decade of transition for cycling. The classic form of the sport slowly moved into the modern era of technology, fashion and science. This is the second part of a recurring flashback to this decade. This time, it’s five races that no longer exist.

1. Grand Prix des Amériques
Pro racing hit North America properly for the first time with the Grand Prix des Amériques. Why the French name? Because it was run in Quebec’s capital city, Montréal. Featuring a hilly and selective course, this race was first run in 1988 and featured some strong winners. Steve Bauer picked up a home win in the first edition. At the time the media recognised that cycling was going global but if today this phenomenon has expanded, things have not changed too much. The race stopped in 1992 but the for 2010 the UCI Pro Tour returns with two races in Canada.

2. The Tour de Trump
Stage racing came to the US in 1989. Unlike today’s Tour of California, the US’s premier bike race was on the East Coast and took in a route in New York, Pennsylvania, Virginia before finishing outside Donald Trump’s casino in Atlantic City, New Jersey. The event later become the Tour Dupont, sponsored by the US chemical company that owns the patent to Lycra. But it stopped in the mid-90s. 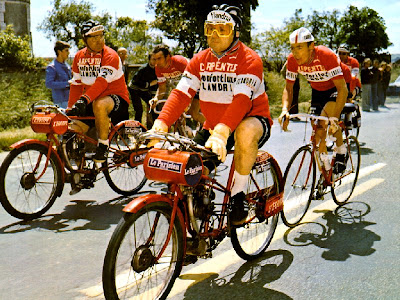 Whilst some races were starting in the 1980s, others were stopping. Bordeaux – Paris was first run in 1892 but it stopped in 1988.

Unlike most other races, this was partially a derny race. By this, riders would sit behind a type of motorbike called a derny and benefit from the draft. Effectively this was a motorpaced race, allowing riders to increase their speed and thereby cover the enormous distance quicker, although riders only got to sit behind the derny as they drew closer to Paris. It was 600km long and ridden in one go. No typo, that’s 600km.

Today you can take a TGV train from the city of Bordeaux to Paris in three hours. The train is deceptive, you go from the south of France, a land of wine and sunshine to the French capital with its colder northern European attitude within three hours. But on a bike the distance is enormous and you’d appreciate the difference. The race was dropped from the calendar, partially because it was too hard and had become too much of a specialist effort.

Despite the name “classic”, it was neither a one day race nor a long standing race. Effectively the Tour of Ireland, this began in 1985 but stopped in 1992. Previous Tours had taken place but this race took off again thanks to the home popularity of Sean Kelly and Stephen Roche, supported by Martin Early and Paul Kimmage.

4. Super Prestige Pernod International
This wasn’t a race but a season-long ranking. Established in the 1950s it was well worth winning and treated seriously by many riders. Unlike today’s UCI Pro Tour, this was not a trophy you collected as a bonus after a good year: it was an honour in its own right. But it fizzled out in 1988, first because a new French law banned alcoholo and tobacco advertising and Pernod was a drinks company but also because the forerunner to the UCI, the FICP was introducing a new ranking system, the FICP points and the Coupe du Monde or World Cup.

Mention Colombia today and in a cycling context it might make you think about Mark Cavendish and his Columbia-HTC squad rather than the South American nation. That’s because if some races and trophies from the 1980s have been lost then we’ve also lost an entire country.

Go back to the 1980s and the Colombians were a real force in cycling, but only when the roads went uphill. Coming from a latin country with mountain passes far higher than anything you’d find in Europe, the likes of Fabio Parra (pictured). Lucho Herrera and Pablo Wilches were electrifying to watch. Parra in particular had a yo-yo style, he’d drop a rival and then wait for the rider to winch themselves back to his rear wheel before dropping him again, the regular accelerations would ruin all rivals. But as dominant as the Colombians were in the mountains, they struggled to hold their position in the bunch at other times.

But their place in 1980s legend is cemented by the arrival of Colombian teams, the Café de Columbia team. And no mention of the Colombians can go without the deafening commentators who would scream commentary down the phone line back to an attendant public in South America. The sport’s popularity has declined and there are few Colombians riding at a high level these days. If you’re interested in the subject then I’d recommend a read of Matt Rendell’s “Kings of the Mountains” which chronicles the rise and fall of Colombian cycling.