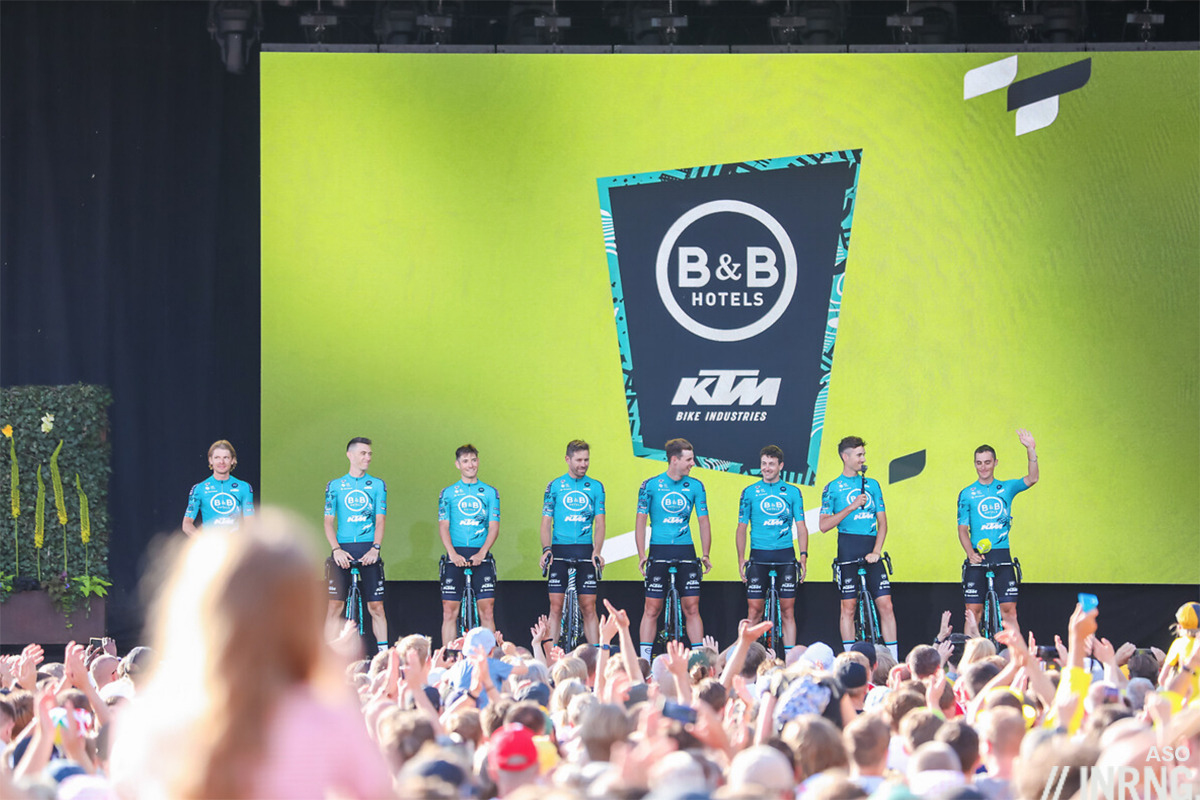 All teams have to secure sponsorship but the smaller squads have it hard just to get meagre funding relative to their rivals, then face all the challenges of allocating what they’ve got. The B&B-KTM team and its big ambitions for the future have gone, taking with it Mark Cavendish’s plans, and others too including a women’s team that will never turn a pedal. It’s a story about one small team but also a structural issue for pro cycling.

Labels…
The sponsor has been B&B Hotels and according to reports the hotel chain had been willing to support what was left so it feels wrong to keep referring to the demise of the B&B team when the sponsor was willing. Instead the name of the legal entity behind the team is Pineau Cycling Evolution so let’s use PCE, named after the team’s founder, ex-pro Jérôme Pineau. 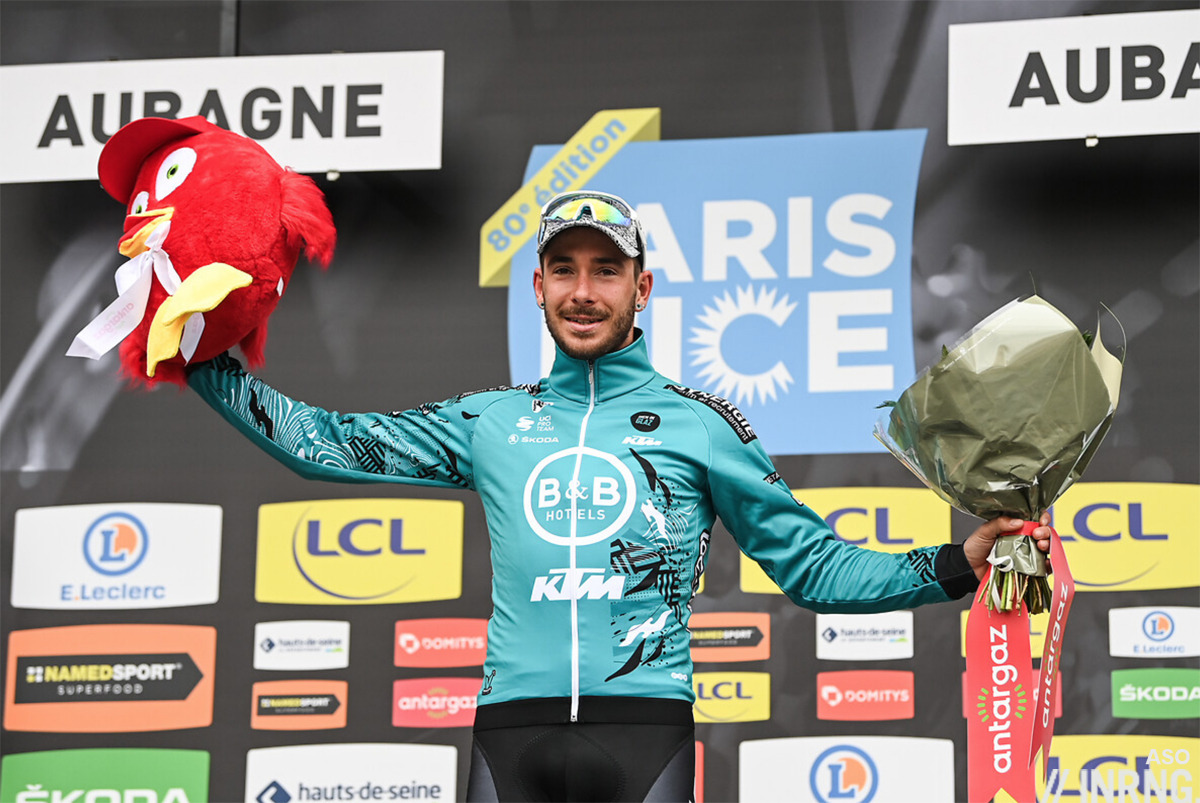 PCE started well enough… it began in 2018 as Vital Concept, backed by a Breton retailer of farming supplies. The jersey design with the glaz tone was a good idea, the idea being that if sponsors might come and go, the team was always recognisable because it would keep the same colour, and that of the blue-green sea of Brittany, France’s cycling mad-region and with a big maritime identity. That was the theory, in practice seeing them up against Bora-hansgrohe and Kern Pharma required a keen eye. And of course sponsors didn’t come, they went, we’ll get to this in a moment.

Bryan Coquard was the big recruit and so close to Pineau that he called his recruit fiston, or “sonny”. But Coquard struggled for wins, 12 in four years including none in 2020 and one in 2021. Pierre Rolland and Arthur Vichot joined in 2019, with the arrival of new sponsor B&B Hotels. Frank Bonnamour had a strong 2021 Tour, taking the combativity prize. The team made some interesting signings, Victor Koretzky for example – although coached by Pineau’s brother Sébastien – and Luca Mozzato’s turning into a promising rider but all together this wasn’t sizzling. It took them two years to get a start in the Tour de France because as a second tier team reliant on an invite they didn’t quite have an incontournable, a must-have rider. They’d been getting invites but this wasn’t assured going forward, first the UCI rules meant the top two Pro Conti teams got automatic invites and PCE didn’t have a budget to compete for this, so it was at the mercy of subjective invites and the hope that they’d supply “animation”. As other teams rose up PCE was looking less attractive. The pressure was showing, Pineau had taken to the questionable strategy of emailing his riders to berate their results, and if the private messages inevitably leaked, he was also blasting his own team in the media. Perhaps this was meant in refreshing honesty but it sure look panicky too. 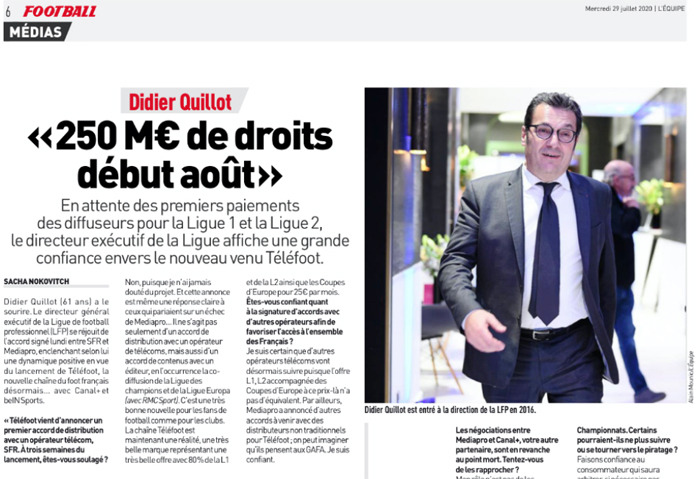 Enter Didier Quillot
For all that Pineau is getting a roasting in the media right now, he’d linked up with Didier Quillot in the quest for sponsorship. Long time a telecoms and media executive, in 2016 Quillot became the directeur général of the French football league, the body that runs professional football in France and with it, sells the lucrative TV rights to Ligue 1 for hundreds of millions of Euros. Only here’s where the problems occurred, the broadcast rights for 2020 to 2024 were sold to a company called Mediapro which outbid everyone else. Great you might think, but commentators and rival bidders even were surprised at the amount Mediapro offered and the assumptions that financed the knock-out bid when it came to subscription income and ad revenue, and that La Ligue and Quillot bought in. How much Covid is to blame is up for debate but l’affaire Mediapro as it’s known in France – alternatively le fiasco Mediapro – saw Mediapro unable to deliver on its payments to La Ligue; nor had the Ligue taken out insurance or sought financial guarantees from Mediapro. It left French football with a big bill, a fire sale for the rights and red faces. Now Quillot hadn’t gone rogue here, colleagues supported his bid to try and sell the French football rights for a billion euros but the short version – there’s a good long version in French at sofoot.com – is he carried the can and quit La Ligue in the spring of 2021.

Fast forward a year and up pops the news that Quillot is working with the B&B team on a new project. In some ways the team had to do something. As suggested here in February, the team was in trouble because it was freewheeling while others were closing in. This bother wasn’t obvious in the moment, more a case of problems to come. Something had to be done. But Quillot? Hmm, the recent past wasn’t great but still with his background he came with one heck of a rolodex.

The plan was to do more than change the sponsor. Quillot seemed to be on to something with the idea the team would take on the name of Paris, a touch of glamour. Crucially all along the Paris town hall was clear it was agreeing to the name but was not paying a single Euro into the team budget. Instead it was an identity around which to build the team. The idea’s a great concept, but here it came with two practical problems. First switching to Paris meant the team had to dump more than its Breton identity, the region had also been funding the team. Next if the team was to be called Paris Cyclisme or some derivative label, this meant less room for a title sponsor. Now, done right a team can have an identity and shirt sponsor, most other sports pull it off, think Paris Saint-Germain. But it’s one of the benefits of cycling that the media reference the brand directly when mentioning the team. In short the bridge back to Brittany was burned and the avenue of title sponsorship was closed off.

Still, a big sponsor was mooted and things sounded confident, a mooted budget of €20 million was doing the rounds, they’d pass Arkéa-Samsic and Cofidis to be in the same bracket as Groupama-FDJ and just short of A2gr Citroën and with this kind of money, bonjour World Tour. With hindsight there’s a touch of “they would say this, wouldn’t they?” but when the news emerged in May it sounded promising, albeit surprising. In June Pineau said we’d know the sponsor during the Tour de France, perhaps on a rest day but it was said this depended on board meetings to sign-off the deal, evoking images of mahogany-panelled boardrooms rather than the actual situation that there was no new sponsor.

Various sponsor names were floating around like Carrefour and Amazon. But why would such retail giants back a second-tier cycling team when they could buy a WorldTeam with loose change from their marketing budgets? Behind the scenes it seems PCE ended up in a Catch-22 situation. A sponsor would only sign up if there was a clear project with riders on board to get therm a Tour start. Riders would only want to sign if there was a backer to pay their wages. So new riders were lured by the promise of things being (almost) a done deal, and this in turn was interesting to sponsors. But the hard part was inking the deal, Michael Matthews, hot property in the wake of his superb Tour de France stage win was interested but said no thanks. As we know Mark Cavendish was keen.

No news by the time the Tour reached Paris and a tiny alarm bell started to ring. Then we’d hear something during the Vuelta, but still nothing. A press conference ahead of the Tour de France presentation in October was called off. Klaxon time. Alas though no sponsor would commit and around this time the beauty and perfume retailer Sephora said non to PCE, according to L’Equipe. Riders were getting very nervous because they didn’t know more than anyone else, the Commissaires de Course podcast recounted how riders were left asking others to forward them articles behind the paywalls of local newspapers Le Télégramme and Ouest-France about the team because they weren’t getting any news from management. The UCI didn’t even mention the team when it listed the teams applying for a licence for 2023, this regularly happens with smaller teams struggling to get the paperwork in on time (eg Androni, Qhubeka, Europcar). Only there was no news a few days or weeks later and last week the inevitable news came that the whole project had imploded and that the team is unlikely to ride as even a third tier Conti team next year with talk of PCE, the legal entity, facing bankruptcy.

So how to prevent all of this? You’d be surprised how many other teams have come close to folding over the years only to secure late funding. But ideally a sponsorship contract needs to be in place earlier, obvious but in place as in signed and filed with the UCI by, say, 1 August. If a company has a marketing strategy to spend tens of millions in the coming years, and this is what we’re talking, then having some dry ink on a contract with five months to go is not asking too much. Especially because it means if there’s no deal then everyone is aware and can at least look for employment elsewhere over the summer when the transfer market is functioning. As things stand (updated) only two riders, Koretzky and Mozzato, have announced they’ve got a job elsewhere and if others ought to follow, only a few and nobody will get the terms and conditions they’d like. 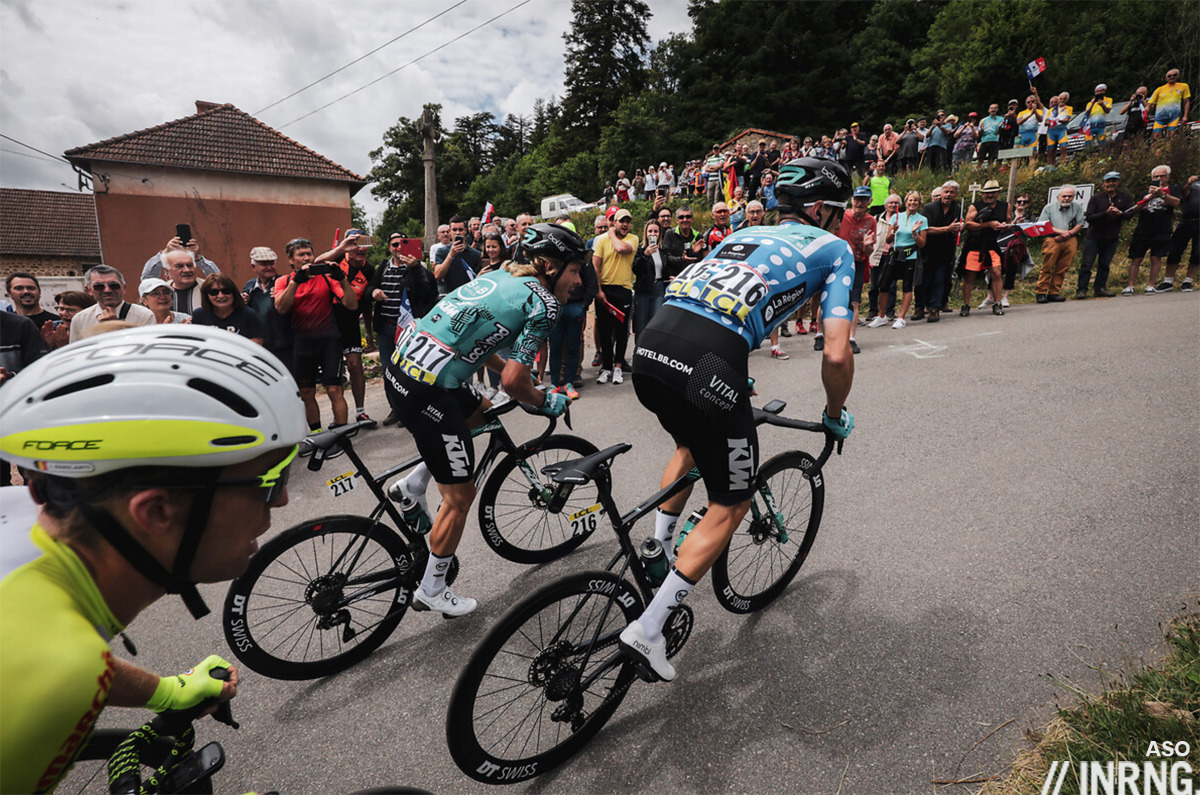 Conclusion
It’s possible to see this is just a small team that was struggling and so inevitably forced to take more risks to stay in the game and those behind the search lost their gamble, a pari perdu in French. Indeed unless they secured something transformational perhaps this squad had been on the way out because a Tour de France start was essential and the chances of an invite were diminishing. But all the same, the timing of this late demise is a disaster that tells us plenty about cycling’s second tier and the struggles to secure sponsors. While Pineau’s not coming out of this well, it’d be interesting to learn what Quillot thinks of it all.

If this can happen this year with PCE, it can happen next year to others too and within the World Tour too, men and women alike. The least the sport could do in the wake of a fiasco like this is explore ways to insist the funding is in place earlier so that riders and staff alike are not left struggling in December.

Next post: Book Review: Jan Ullrich, The Best There Never Was

Previous post: How Did The Riders To Watch Do?