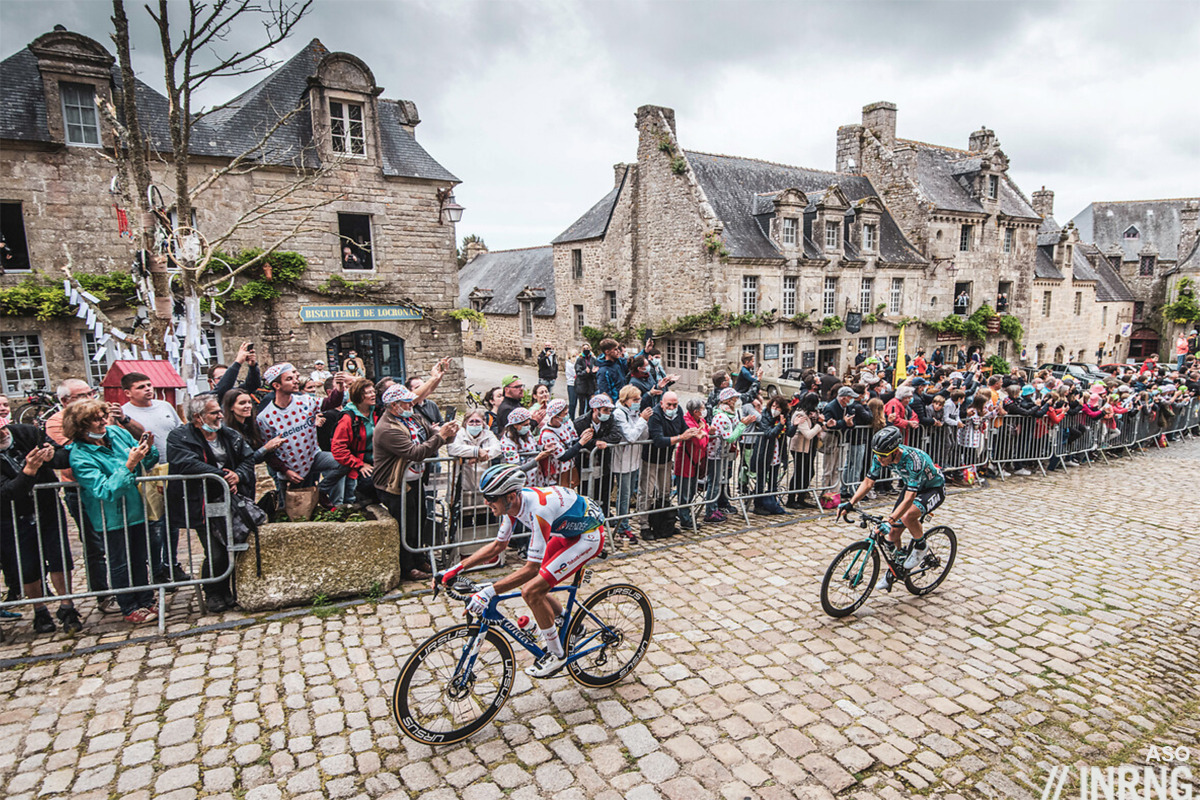 Brittany is a region that ranks alongside the Basque Country, Flanders and Tuscany as one of the hotbeds of cycle racing. Many riders in today’s peloton are from the region, several champions from the past hail from here, two teams in the Tour have a Breton identity, another has a Breton sponsor while one of the Tour’s jerseys is sponsored by a Breton firm. 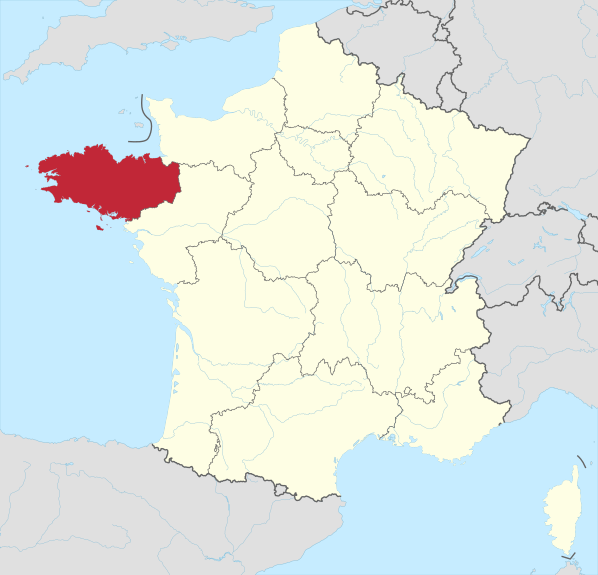 Brittany is the region that juts out into the Atlantic, home to 3.3 million people in France, a country of 67 million. It’s roughly double the size of Flanders, with half the population. Regions in France are administrative creations and can often feel like it. Brittany doesn’t, it’s got an authentic identity. A kingdom from the 9th century on, today there’s a Breton language, a black and white flag and a Celtic background that’s visible in town names and typefaces alike; and audible with the biniou and cornemuse, bagpipes in English.

Most French people are proud of their home region, but polls regularly suggest Bretons top the list when it comes to local pride. This supports the “loud and proud Breton” stereotype. It can confound outsiders, the terrain’s not too exciting, the food and wine isn’t famous – more agribusiness than terroir – and the economy is prosperous but middling. Plus it rains a lot – “the weather is nice several times a day” goes the joke – so it’s not a region that seeks to impress. But that’s sort of the point, it’s not about whether outsiders like it, the locals do. Pride loops back to the Breton identity rather than other features.

How cycling as sport became so popular isn’t obvious. There’s the usual mix of industry and agriculture at the end of the 19th century where many workers are able to afford a bike as a means to get to work, this holds true across other parts of France, Europe and the world beyond. Manufacturers started using races as a means to promote their bikes and tires but the sport didn’t get an immediate start in Brittany, most races were closer to Paris. In 1891 there was Paris-Brest-Paris, the 1,200km race which only underlines how far Brittany is from the capital. Some like to draw a link between the Breton culture of celebrating strong, outdoor work whether farming or fishing, and cycling with its tough image of the cyclist out training and racing in all conditions.

The first Breton champion was… from Argentina. Lucien Mazan was born in Brittany but his parents moved to Argentina in search of a fresh start, not unusual on this Atlantic peninsula. After winning a bike as a prize he took up racing against his father’s wishes and gave the pseudonym “Breton” to avoid being noticed. He thrived and soon moved back to France hoping to become a professional cyclist. Confronted with another pro called Breton he renamed himself Petit-Breton and quickly rose up the ranks, winning the first Milan-Sanremo in 1907 and later that year the Tour de France and a repeat win the following year.

The post-war period saw Jean Robic – born in the Ardennes on the other side of France but a Breton – win the Tour de France in 1947 and then fellow Breton Louison Bobet took three in a row in 1953, 1954 and 1955. There was a steady flow of smaller wins in the following years, think Tour de France stages, spells in the yellow jersey and classics from the likes of the Groussard brothers until Cyrille Guimard came on the scene, a great racer and arguably the greatest team manager, a point he’d probably argue.

Then Bernard Hinault arrived. If you take the Breton stereotype and exaggerate it you get Hinault, the snarling champion who could bend any race to his will and still makes life difficult for French riders today with his sharp quotes. Although a recent feature in L’Equipe suggested it’s not really out of malice but more his way of tough encouragement. It saves bandwidth to cite Milan-Sanremo and the Tour of Flanders as the races he didn’t win. He won the Tour de France five times and is the obvious “best Breton cyclist” given he rates alongside Eddy Merckx and Fausto Coppi as the greats in any measure. In English both William Fotheringham’s biography and Richard Moore’s “Slaying the Badger” are entertaining and informative reads.

Just as not everyone in France likes football, not everyone in Brittany is cycling-mad either. But many are, read local newspapers like Ouest France (“West France”) or Le Télégramme and cycling is up there with le foot for column inches, whether it’s World Tour transfer news or a village race result. Parochial? Maybe but on a giant scale, Ouest France by the way is France’s biggest selling newspaper, its circulation is doubles national dailies like Le Monde and L’Equipe.

A share of the audience are cyclists, Brittany has the most FFC racing licences per capita, and by some margin:

There are other federations and many just ride with friends rather than seeking out a club and then a federation, but still the chart is a proxy for cycle sport activity in France. Look elsewhere and the region has got the the World Tour race the Bretagne Classic (ex GP Ouest France Plouay) plus the Tro-Bro Leon race, the Grand Prix du Morbihan and these are the races at the top of a pyramid, what impresses more is the vast number of U23 and amateur races for all categories. Locals complain about vanishing races and for all those racing licences, the count is falling, a point also made in this morning’s Le Monde. Although it’s relative, Brittany is holding up better than many other regions. 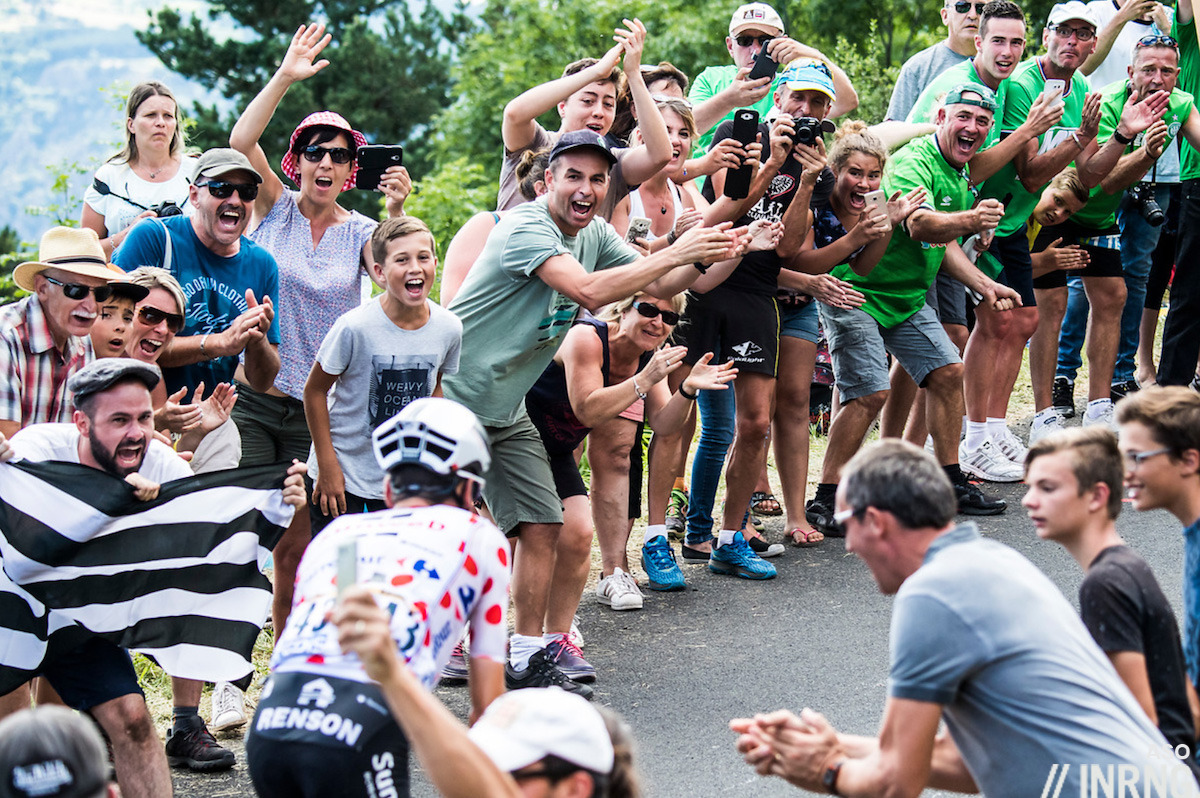 Today Riders like Warren Barguil, Audrey Cordon-Ragot, David Gaudu and Valentin Maduouas are from the region and over a quarter of the French riders on the Tour startlist today are Breton. The UCI President David Lappartient is a Breton. Junior Eddy Le Huitouze is a name to watch for the future. The Arkéa-Samsic team used to be the Bretagne Team, sponsored by the region and its two title sponsors today are Breton companies. The B&B Hotels team also has its HQ in the region. Meanwhile the Intermarché-Wanty team is backed by the Belgian arm of Intermarché, a French supermarket chain from Brittany. The polka dot jersey in the Tour de France is sponsored by Leclerc, another supermarket that began in Landerneau… coincidentally or not it’s today’s stage finish town. 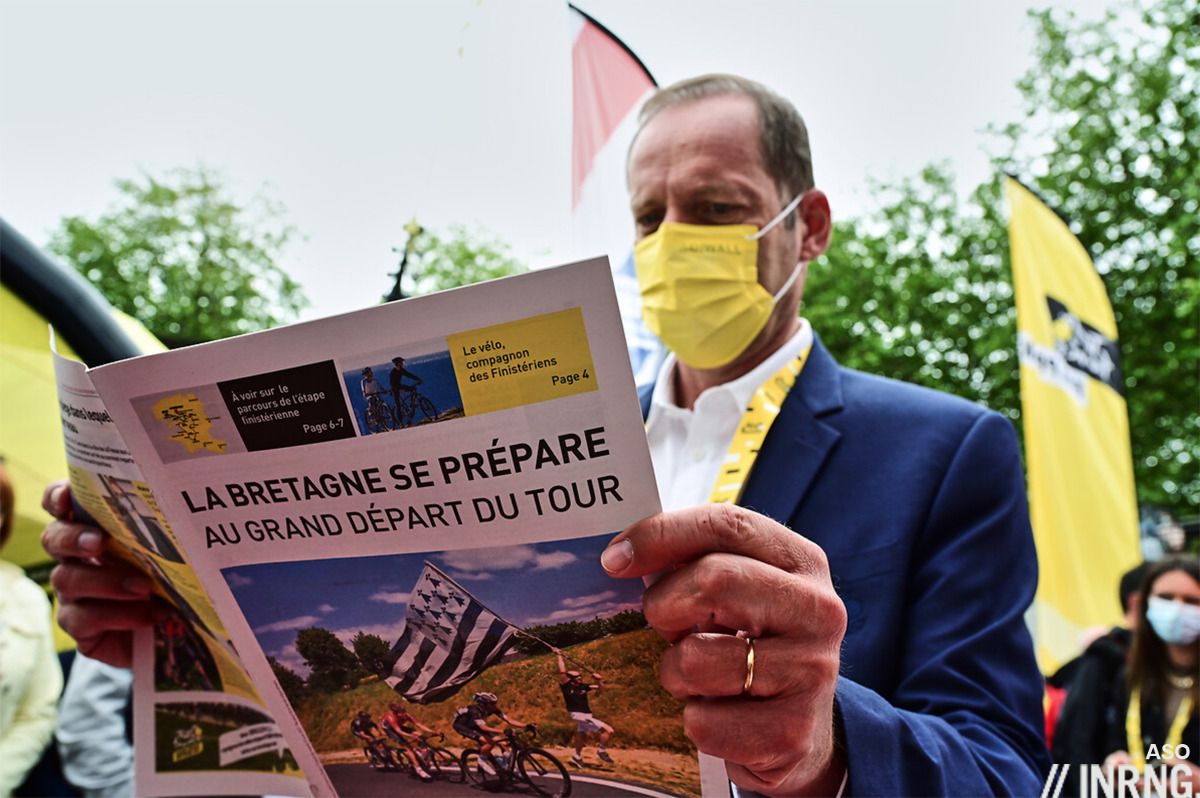 It helps explain why the Tour is here because the 2021 grand départ was going to be in Copenhagen but this had to be moved to 2022 and Brittany was only too willing to step in, if Christian Prudhomme needed to find a region ready to host the Tour at the drop of a hat (and a drop of the hosting fee) then Brittany was the obvious choice. Several newly-elected green mayors have spoken out against the Tour de France for its commercialism and carbon footprint but the Breton ones seem to have backpedalled more… they know where their votes come from.

Kids are still in schools and it’s June which means few holidaymakers but as this is Brittany expect plenty of people by the road today. The Tour can’t visit every year but it tries. If you visit you’ll find races galore every weekend and while the roads lack the drama of the Alps or Pyrenees you’ll never wait long to meet a local out on the roads.