Book Review: Jan Ullrich, The Best There Never Was 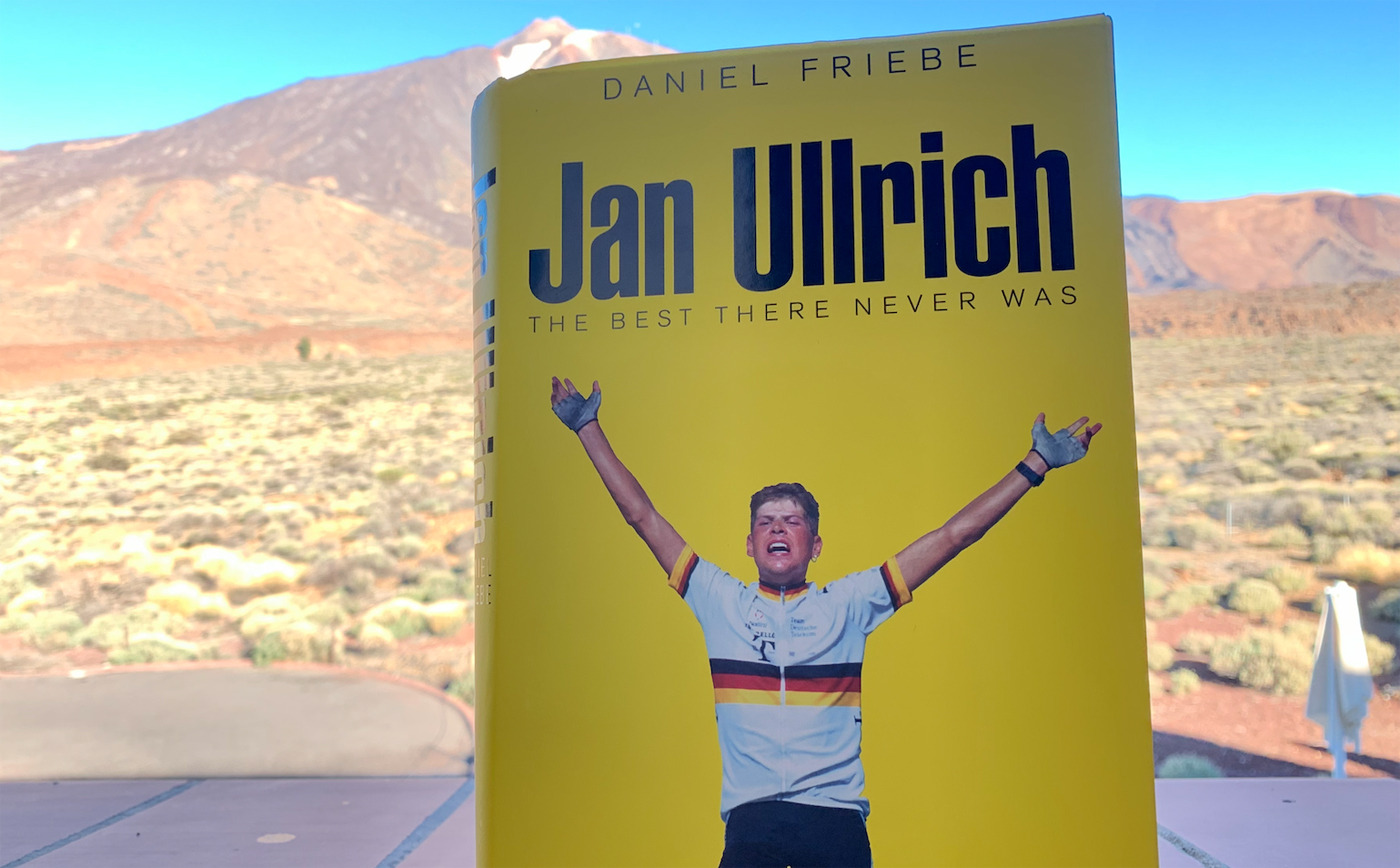 Jan Ullrich, The Best There Never Was by Daniel Friebe

The Tour de France dominates pro cycling like a star around which everything else orbits. Other races in July can struggle for attention and many riders make it the goal of their year. Jan Ullrich’s career was part of this, his first win suggested he’d dominate the Tour, and with it the sport for years to come. Even when he didn’t win, there was always the seasonal targeting of the Tour with his preparation getting more intense the closer the race got.

On a far smaller level the Tour monopolises attention such that when a cycling biography comes out in June, along comes the race with all its distractions. Having bought a copy in late June there was no time to sit back and read it… until now.

If you shouldn’t judge a book by its cover, having bought the hardback you can feel the heft, it runs well beyond 400 pages with notes and an index and the font isn’t big either.

As the title implies Jan Ullrich’s career arc was unlike most others. A Wunderkind who won the amateur worlds in 1993 as a teenager and almost won the time trial against the pros there too, he was second in the 1996 Tour de France, taking the final time trial. Then came 1997 and Stage 10 from Luchon to Arcalis, a ski station in Andorra whose name today still seems to evoke Ullrich’s ascent, the day he rode the field off his wheel, his flat back, a gold earning dangling and the black, red, gold bands of the Bundesflagge on his jersey. For many it was a vision of the future: if he could climb like this, win the time trials, and arrive in Paris with nine minutes on his next rival all at the age of 23 – precocious in those days – then the Tour seemed to belong to him. Of course he’d never win it again.

The book places Ullrich’s life in the wider context, the fall of the Berlin Wall and German reunification are more than a historic and political soundtrack, these events shapes lives. Growing up in East Germany, he’s part of the DDR’s sports system where the most promising athletes, if you can call 12 year olds that, are filtered into sports schools where athletic ability is prized and nurtured more than anything else. When the Wall collapses and Ullrich goes to ride for a team in Hamburg he and his team mates are housed on the notorious Reeperbahn and the contrast must have been astonishing for a 19 year old fresh out of the Berlin sports system.

The 1997 Tour win is symbolic for a country trying to reunite, easterners could see one of their own winning, westerners can celebrate their gain as the first – and only – German Tour winner, it was an act of unification itself. Yet this put him on a pedestal and the move from cheer to adulation, and the risks this brings are well set out in this book. Things fall apart slowly.

At first a series of niggles, hiccups and setbacks, then scandal. There’s injury, drink-driving, a doping ban following an out-of-competition test after a nightclub and the slide begins. Amid all of this Ullrich’s career span took him from the state doping programmes of the DDR, the rise of EPO, the switch to blood bags, and the brief duopoly of Michele Ferrari and Eufemiano Fuentes. It’s obviously intriguing but handled sensitively and well-researched. There’s exploration on when Ullrich might have started using EPO and whether he was a victim of the East German state doping program. The author’s research adds new detail on Operation Puerto and the workings of Fuentes. You won’t look at a chocolate Toblerone bar again but after this anecdote Friebe is quick to add “there were elements of pantomime, like this, but also moments when the sport seemed not so much to have mislaid its moral compass as lost contact with Earth’s magnetic field”.

The contrast in attitudes towards DDR doping days and pro cycling’s leaden years is striking. The book mentions how many doped ex-athletes from the DDR get moral and financial support today. Pro cycling also had endemic doping but once entangled by Operation Puerto – the final verdict would take years – Ullrich never raced again and became a pariah. Now the two systems are different in obvious ways that a book review doesn’t need to cover, readers can reflect on this.

In a podcast episode Friebe mentions that Lance Armstrong looms large in this book and and prior to reading this was a concern, especially if the publishers wanted him to be crowbarred into the story because of his celebrity. It’s handled reassuringly well, it’s not Ullrich via a Texan prism. He’s one of several to talk about his time and there’s plenty from others like Rudy Pevenage, Jörg Jaksche or Rölf Aldag too but given the rivalry for years, featuring Armstrong makes sense. Ullrich himself isn’t interviewed but that might not be any loss, one of the reasons for his troubles with the media over the years stems from him just not being that articulate in set-piece interviews.

At times written in the first person where Friebe explains his research and travels to compile this biograph, there’s a sensitivity towards Ullrich throughout, the author can be judgemental about the system but not the subject. All these years later Ullrich seems to be a kid from Rostock who wasn’t ready to handle what would follow; at one point he’s at the Sydney Olympics in 2000 with the German team and at ease in this institutional get-up rather than the garish world of pro cycling, the Telekom team and public celebrity. Whether through early problems like weight gain or the deep personal problems of recent years, at times there’s a temptation as a reader to place Ullrich onto an imaginary psychologist’s couch and diagnose his issues through the pages, especially as the intensity of the book seems to grow with recent events where Ullrich goes from trying to win a bicycle race to coping with life. Friebe sensibly avoids this diagnosis, there’s sympathy but no solutions as the book sets out the struggles with addiction and mental health. There was a point towards the end of the book when I could feel the weight of pages on the left and how I almost didn’t want to turn further, as if to leave some kind of future ahead.

The Verdict
An engaging and gripping read. Sport is about the celebration of victory but the losers can supply more compelling stories. The rise and demise of Armstrong has been told many times over, Jan Ullrich’s story less so, particularly in English and the author with his language skills and Berlin residency is the perfect writer. This book tells a story of Ullrich with themed chapters that are well-researched and written with polish as they blend the micro with the macro, from details on winter weight gain, to new light about blood doping practices all the way to to placing Ullrich’s life with the social context of German reunification and this breadth makes it one of the best cycling biographies of recent years.