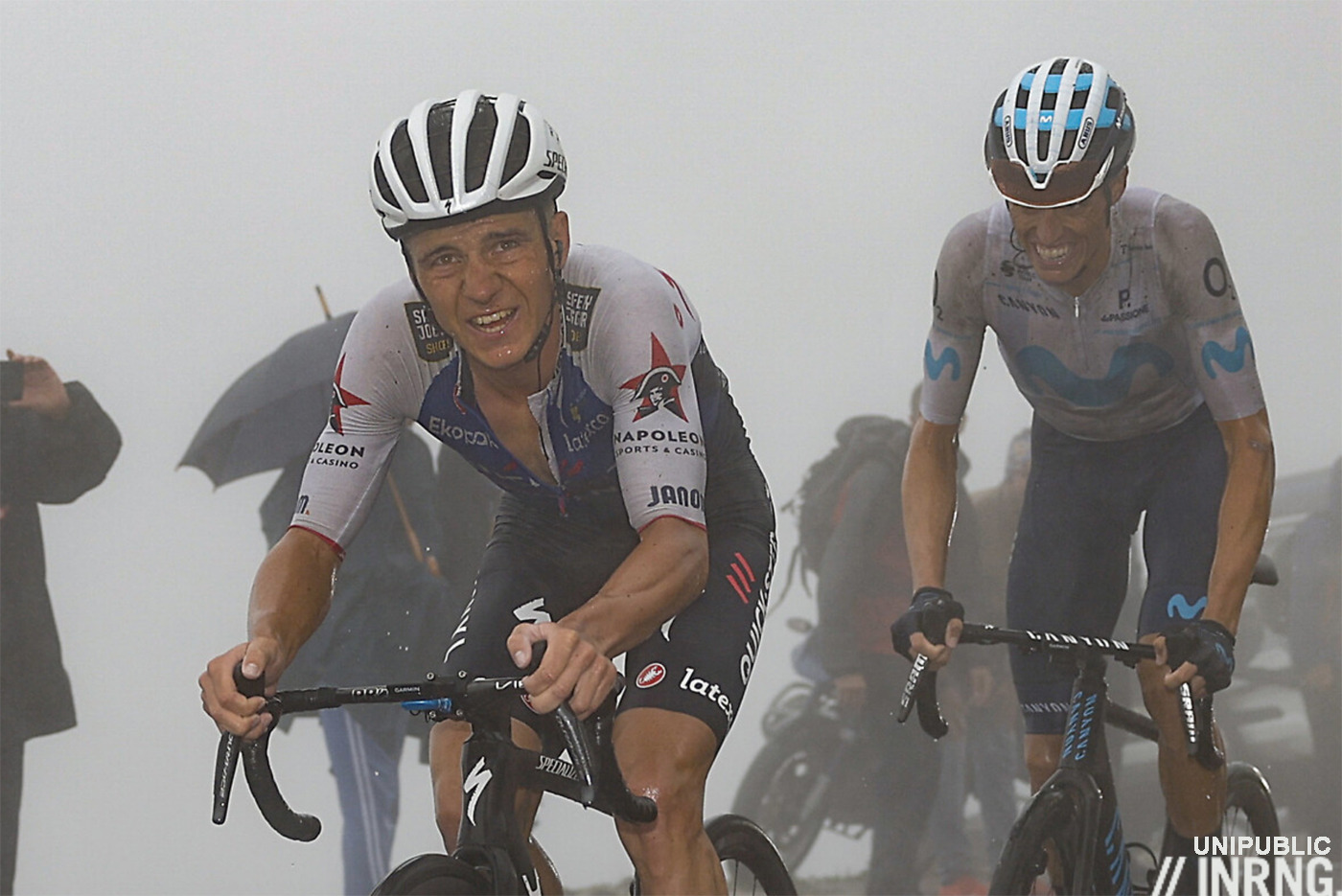 Remco Evenepoel keeps passing every test and now leads the Vuelta by over a minute on Enric Mas with Primož Roglič at almost two minutes. Can he keep it up?

A light look at the Vuelta contenders, I’d like to take a deeper dive but am travelling and have 2G internet access so uploading plain text to the blog is all the bandwidth allows.

Back in 2012 British cycling fans were often occupied by the form of Bradley Wiggins. “Has Bradley Wiggins peaked too soon?” they asked after wins in Paris-Nice and the Critérium du Dauphiné en route to the Tour de France.

Belgians fans must be wondering if Remco Evenepoel is doing too well, albeit with a different time frame. Not for him a question of whether form in March or June can last to July, instead whether the performances of August can be sustained into early September. Can he parlay his strong start in the Vuelta into the second and third weeks, can he cope with the longer climbs to come and the altitude of the Sierra Nevada next weekend? He keeps passing every test but so did Tom Dumoulin in 2015, until Fabio Aru and Astana sacked him. Evenepoel though is looking more punchy and potent.

So it’s advantage Remco, and then some. Looking back, there was a moment in Utrecht when he sprinted away from his team mates at the finish of the team time trial and in the fading evening light you could see his legs looked different, gone was the jambon look and instead his thighs looked like cured jamón.

He’ll find Tuesday’s time trial to his advantage, it’s as flat as a tortilla and many of his wins have come in time trials, he should extend his lead. The longer climbs are merely longer time trials and he’s been working at altitude prior to the Vuelta. So far so good, the only doubt is whether he’s had to go into the red to put himself in the red, whether the efforts have been so hard that he’ll have to pay later on.

Plus there’s Covid. A Quick Step DS has gone home, now a rider in Pieter Serry. Just mentioning Covid online can be perilous but this much we know: the new coronavirus is persistent and pesky, it is way more contagious and makes ‘flu look old and lazy, and for an endurance athlete trying to perform across three weeks this is potentially ruinous. This adds risk to every race given the propensity to fall ill, to suffer from fatigue.

Enric Mas is waiting. He’s looked spectacular in the past, now he’s consistent and dogged but that’s no bad thing, we might not celebrate his second place last year, or his fourth in the Tour either but these are very solid rides. He can wait like the fox in Aesop’s tale, this time not for the crow to drop the cheese but for the Belgian to drop his maillot rojo. And if this doesn’t happen, no matter. He saves his season with a second place overall and quite possibly saves his Movistar team from relegation. Movistar have every incentive to play it safe and that’s often their house style of racing.

As for all the others, things are tight. Primož Roglič has been consistent so far, down in relative terms but never out. While others have looked good one day, and imploded the next. Ineos are in an interesting position with Pavel Sivakov and Tao Geoghegan Hart in great shape and suited to the mountain stages to come but 21 year old Carlos Rodriguez rides high on GC. Similarly UAE have João Almeida sixth on GC but two minutes adrift of teenage wunderkind Juan Ayuso.

Simon Yates is sixth overall and normally not here to cruise around. But after three DNFs in four grand tours, even a solid but discreet overall position is handy for his team as they crave points.

As for the others, Jay Vine told The Cycling Podcast he’s still on the minimum wage, and since he’s not even World Tour, that’s… well a whole blog post of nuance but we’re talking €32,102 as the salary for a non neo-pro on a Pro Conti team. Never mind the exact rate, for someone who can take two stage wins, including one gained after riding away the GC contenders on the final climb, he’s due to add a zero on end, then multiply this. Watch tomorrow’s time trial because he’s ruled himself out of GC but a steady ride here should only add to his value.

Finally a reminder all the stage profiles are on one page at inrng.com/vuelta and the Thursday sees the hard climb out of Estepona, then next weekend has the big combo of La Pandera and the Sierra Nevada. Belgian fans, and the rest of us, will know a lot more this time next week.