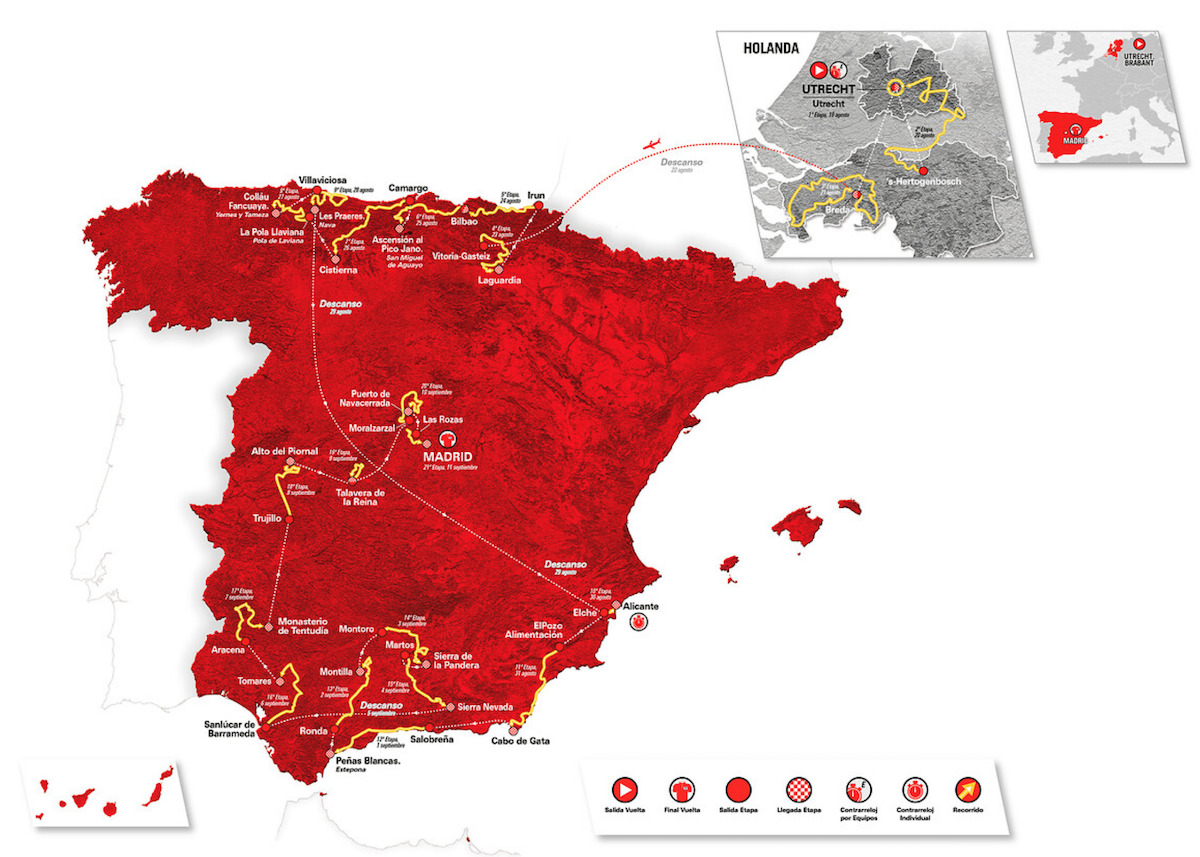 Here’s a simple and accessible Vuelta a España guide with all the stage profiles and more on one page. There’s all the technical information such as the different points competitions, time bonuses, time cuts and more.

Route Summary
A trek to Utrecht where the race begins with a 23.3km team time trial and then two flat stages. Mid-way there’s a 30.9km time trial. Otherwise there’s the now familiar mix of summit finishes, nine in total where some can be just  handful of kilometres long but are viciously steep, others last for ages on wide roads. Like the Giro and Tour there are slim pickings for the sprinters, especially if they struggle with a climb mid-stage or an uphill finish.

The team time trial is back, the first appearance in a grand tour since the 2019 Vuelta. As always a tricky exercise loved by the winners and hated by the losers because if things go wrong it’s down to everyone. The stage should allow the big teams to pull out a lead, big in both senses as those packed with tall rouleurs, and those with budgets.

The Alto de Amerongse looms over today’s stage, the hardest point could be the corner into the foot of the climb but the road after is wide enough to move up a few places. It should allow someone to take the mountains jersey before a sprint finish in Utrecht.

Another sprint stage, this time nudging the Belgian border, especially in the frontier town of Baarle-Nassau where the border famously cuts across cafe terraces and through a supermarket.

A change of scale with the route taking in climbs over 1,000m above sea level and an uphill finish amid the vineyards.

A run along the coast to Bilbao via San Sebastian with some climbs which should be familiar to some of the peloton and which will also feature in the Tour de France’s start here next year.

The Vuelta crosses into Cantabria for the first summit finish with the “new” climb up the Pico Jano. It’s a climb of two parts with a steep main road before a flat section midway across a hydroelectric dam, then comes the goatpath finish to the top but fortunately it has been freshly surfaced in time for the race. As you’d expect for the first summit finish it’s selective but not savage, it’ll rumble riders who aren’t going to win.

A sprint stage interrupted by the giant San Glorio pass, a long drag up that rarely gets more than 7% but doesn’t drop much below 5% either over the space of 17km. 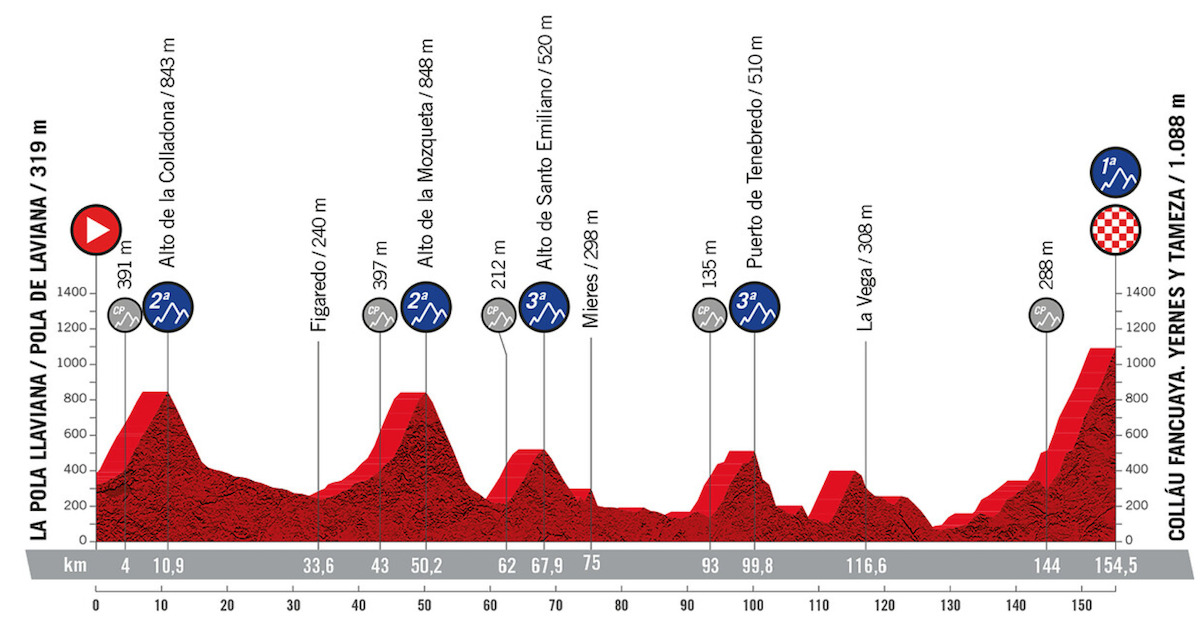 A tough mountain stage. There’s a climb to start which is awkward but could be a small mercy if it’s where the breakaway can form. Another discovery and tarmacked in 2019, the Fancuaya sounds like an insult, it’ll have some swearing as they tackle the irregular slope and double-digit gradients of what was once a shepherd’s route up to the pastures.

Calling this a classic Vuelta stage feels wrong, it’s more an archetypal route of the contemporary form that the race has taken where it deploys short, steep climbs. The final climb is less than 4km but it’s a wall of a climb up a narrow backroad where the slope is between 14-18%. It was used in 2018 and Simon Yates got the stage and reclaimed the red jersey which he’d keep to Madrid.

After the rest day in Alicante, where the GC contenders and TT specialists will spend their rest day on their TT bikes, it’s a 30km TT on big open roads. It suits the specialists and will put the climbers on the back foot.

A start outside the giant industrial producer of salchichón that sponsors the race and then a parade down to the coast over many winter training roads used by teams in the off-season before a finish on the salty sea flats.

More Cosa del Sol coastal winter training roads and then the big climb out of Estepona, the regular ramp of the Peñas Blancas.

A breakaway or a sprint stage? By now there’s plenty of riders willing to barge clear and if the road is lumpy, the hard part is the uphill finish in Montilla, it’s too much for the bulkier sprinters. 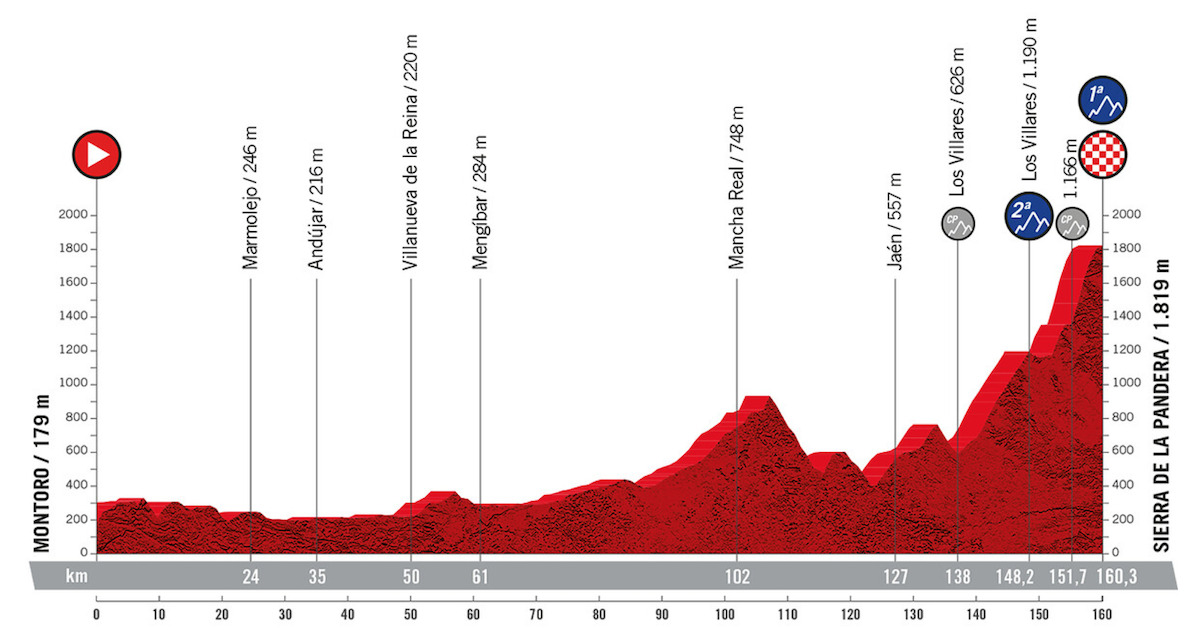 The Pandera climb returns, it’s a backroad to a military communications base and has been used five times this century, the last winner was Rafał Majka in 2017. 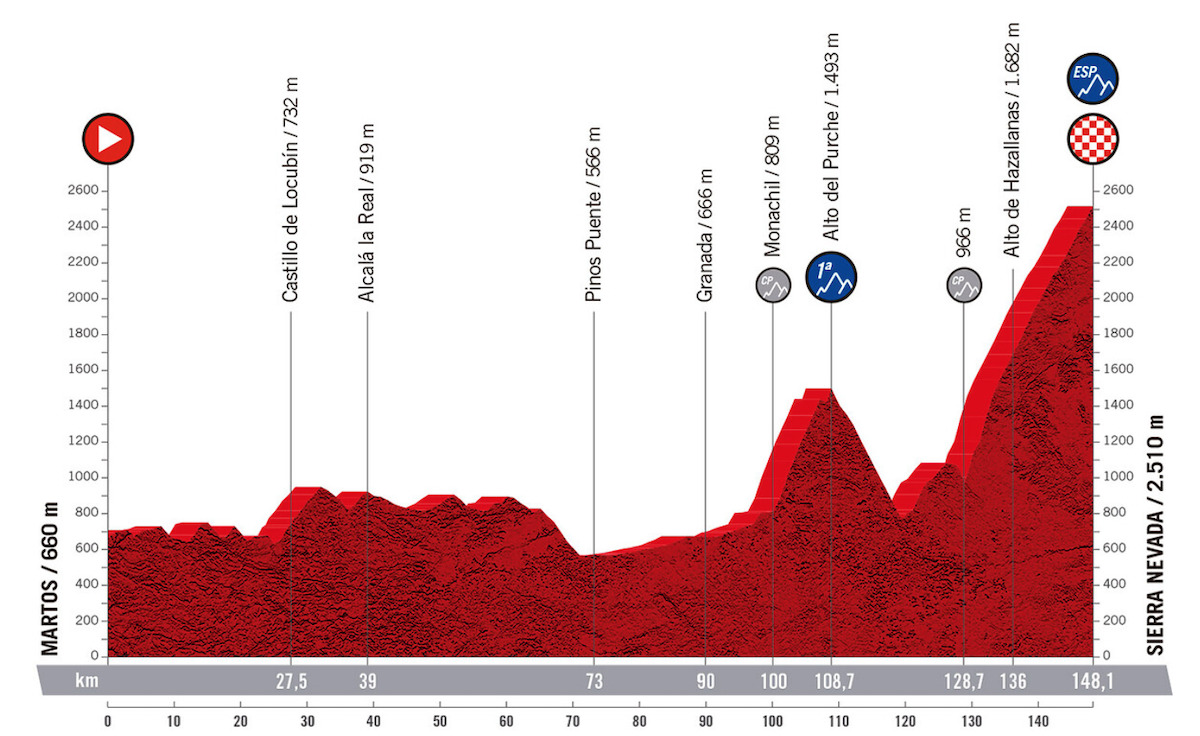 Another day, another big climb. This is the Sierra Nevada climb and all the way to Sol y Nieve ski resort and then beyond, a climb known to many who have stayed at the Sierra Nevada’s Centro de Alto Rendimiento as part of their altitude camps. The race wanted to go higher and reach 2,850m but there were protests from ecologists and the local governor backed them. So it’s the Hoya de la Mora finish at “only” 2,500m.

Another quintessential Vuelta stage where the punchy uphill finish should help pick the winner from the breakaway.

Two climbs of the Alto de Piornal await but it’s not a circuit finish, the race climbs up different sides of the same mountain. For once it’s not so steep, the road is wide, regular and often no more a 5% slope. 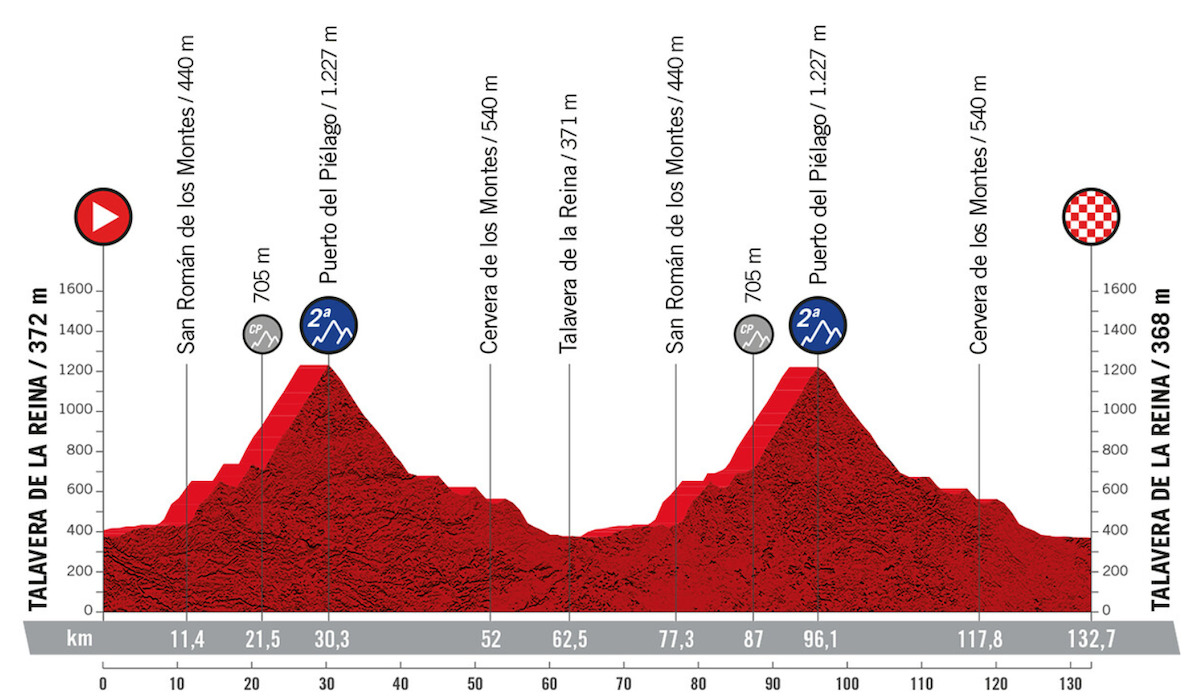 A quick dash and this time a circuit race with two laps of a 62km course via the Puerto del Piélago. The climb is not fierce, it goes up in three parts with small descents in between and apart from some 8% after the second descent, it’s a gentle 5% most of the way. 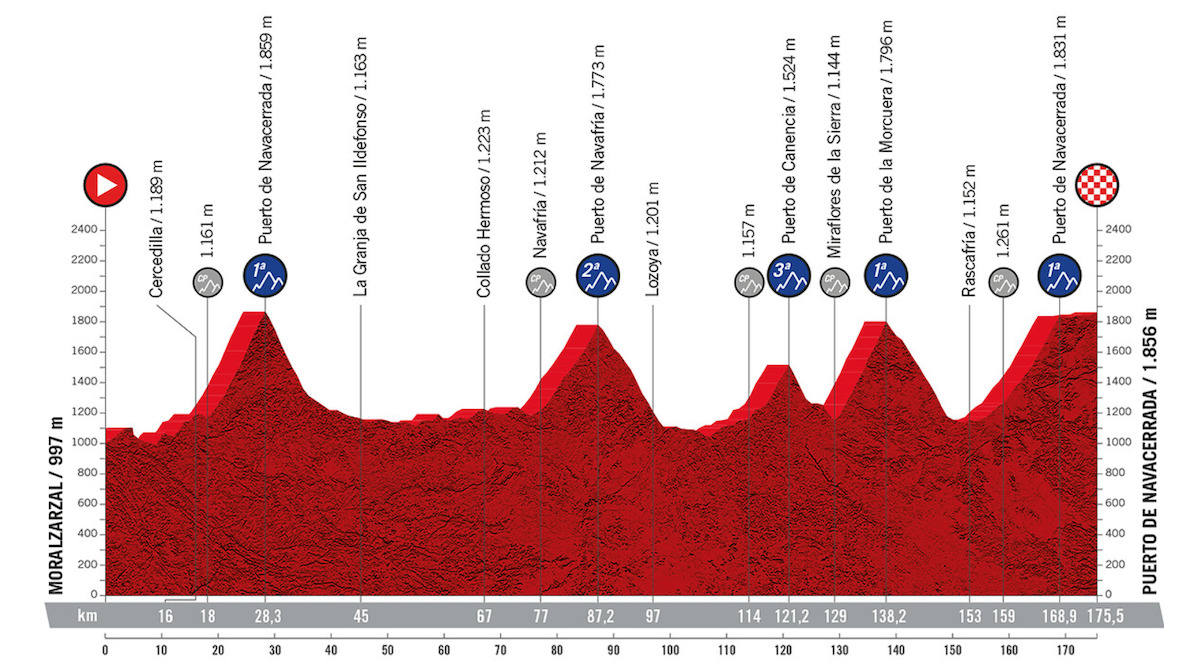 It’s not identical to 2015 but does feature the same climbs of La Morcuera and Navacerrada where Fabio Aru and his Astana team finally toppled Tom Dumoulin. 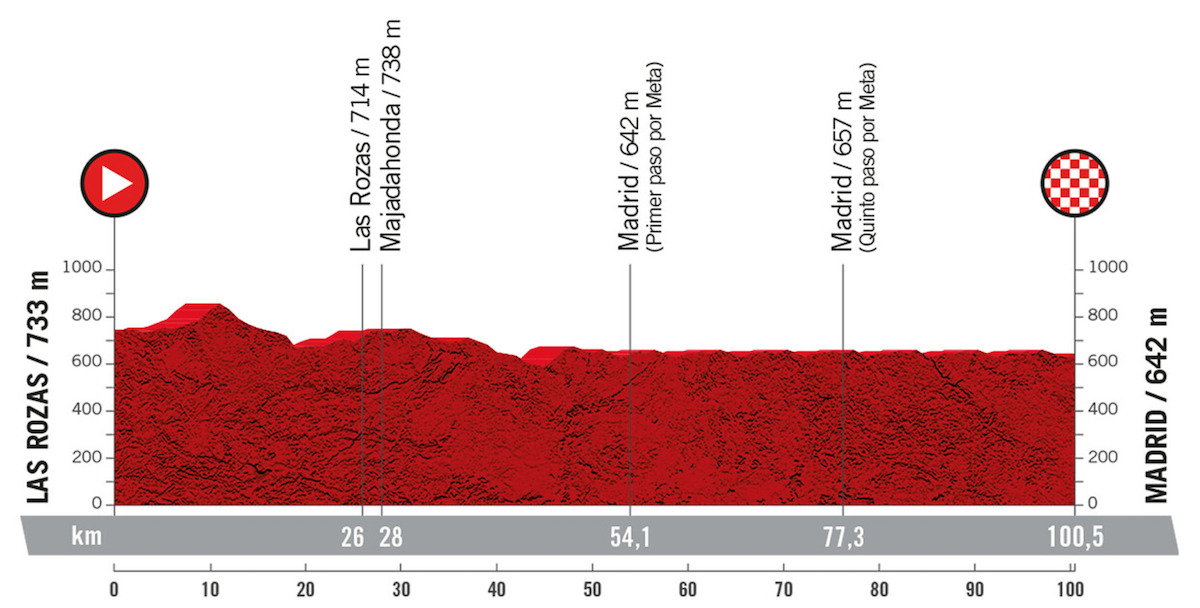 The traditional Madrid parade and the bait to encourage sprinters to stay in the race.

Overall classification
A red jersey sponsored by Carrefour, a supermarket.

Points competition
Points are awarded at the finish line and at the intermediate points in the stage and the rider with the most points wears the jersey. It is sponsored by Skoda, a car manufacturer

The scale is almost identical to the Tour de France but it’s the stages that change with fewer dragstrip sprint finishes where 50 points await.

Mountains competition
Points are awarded at the top of categorised climbs and mountain passes, with these graded from the easier 4th category to the 1st category and the special Cima Alberto Fernandez for the Hoya de la Mora high point of the race. Again the rider with the most points wears the polka-dot jersey. It is sponsored by Loterias y Apuestas del Estado, the state lottery

Best young rider
his is awarded on the same basis as the red jersey, except the rider must be born after 1 January 1997, ie aged 25 or under. This year well over 40 riders are eligible. It is sponsored by Plenitude, a gas and energy company. 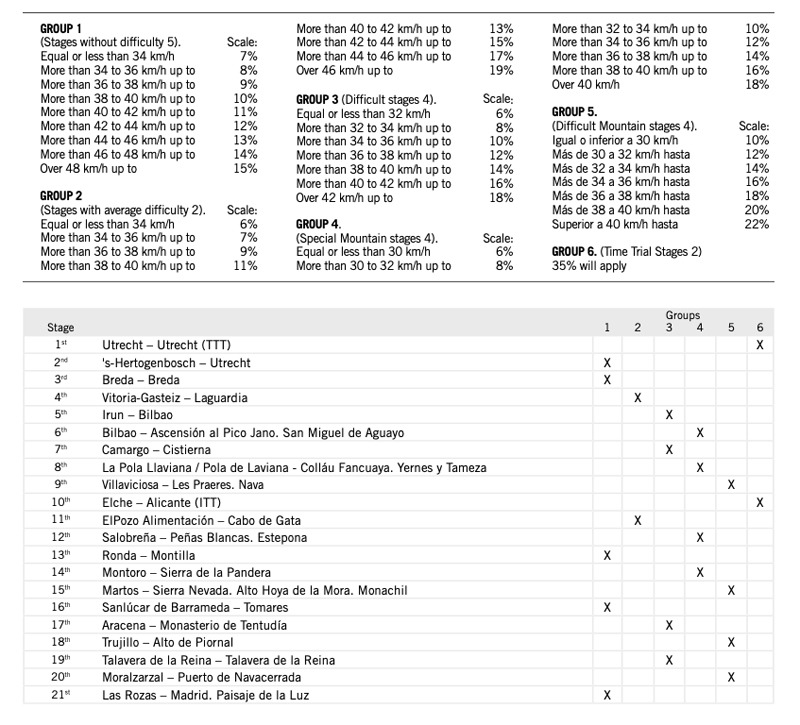 Stages are given a rating from 1-6, look up the stage in question in the table above. Then see the average speed for the stage winner and apply the corresponding percentage.

TV coverage and the unmissable stages
Apart from the first and last day, all stages should finish around 5.30pm CEST. Not all are live from start to finish but the Vuelta can be consumed differently on television, you can often tune in for the final hour or just the final climb and catch most of the action. This isn’t to push you away from the whole race, it’s more how it is designed with action on many days but perhaps not action all day.