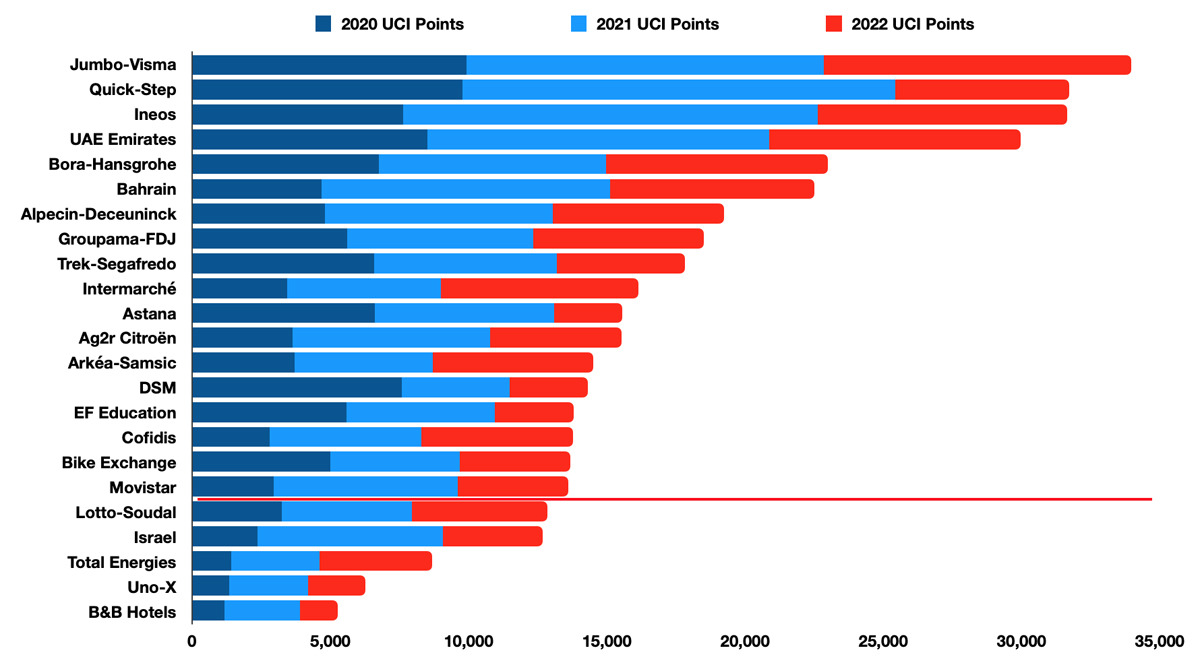 BikeExchange-Jayco have had a good week and climb from 18th to 17th, with Movistar slipping to 18th having begun the season in 15th. There’s a close four-way battle to avoid 18th place but four teams involved here have a buffer on Lotto-Soudal and Israel-PremierTech who are struggling to score.

Thanks to another bumper week from Simon Yates, BikeExchange move up from 18th to 17th. Movistar slip to 18th place in a contest where, everything else being equal, 19th or below means relegation. While the team was rightly jubilant at Annemiek van Vleuten’s win atop the Markstein and the Planche des Belles Filles, a search party was being sent to look for their men in the Clasica San Sebastian, practically the team’s home classic but they had only two finishers with Antonio Pedrero best in 19th; they fared better the next day in the Circuito de Getxo with Aranburu and Valverde in the top-10. 18th is still safe so it’s not disastrous, plus if Movistar are 18th it’s only because they’re 68 points behind 17th place.

We now have four teams sitting above the red line with just 180 points between them, it’s very tight to the point where one result here or there, or, say, a puncture, will move a team up or down. Management of these teams will all be a tense as a drive-side spoke. DSM and promotion candidates Arkéa-Samsic ought to be bothered too. DSM are only 500 points clear of EF, Arkéa 700.

But their relief so far for any teams feeling the heat and worried about falling to 19th place is that neither Lotto-Soudal and Israel are closing in, Israel are a thousand points adrift of Movistar, Lotto-Soudal 763.