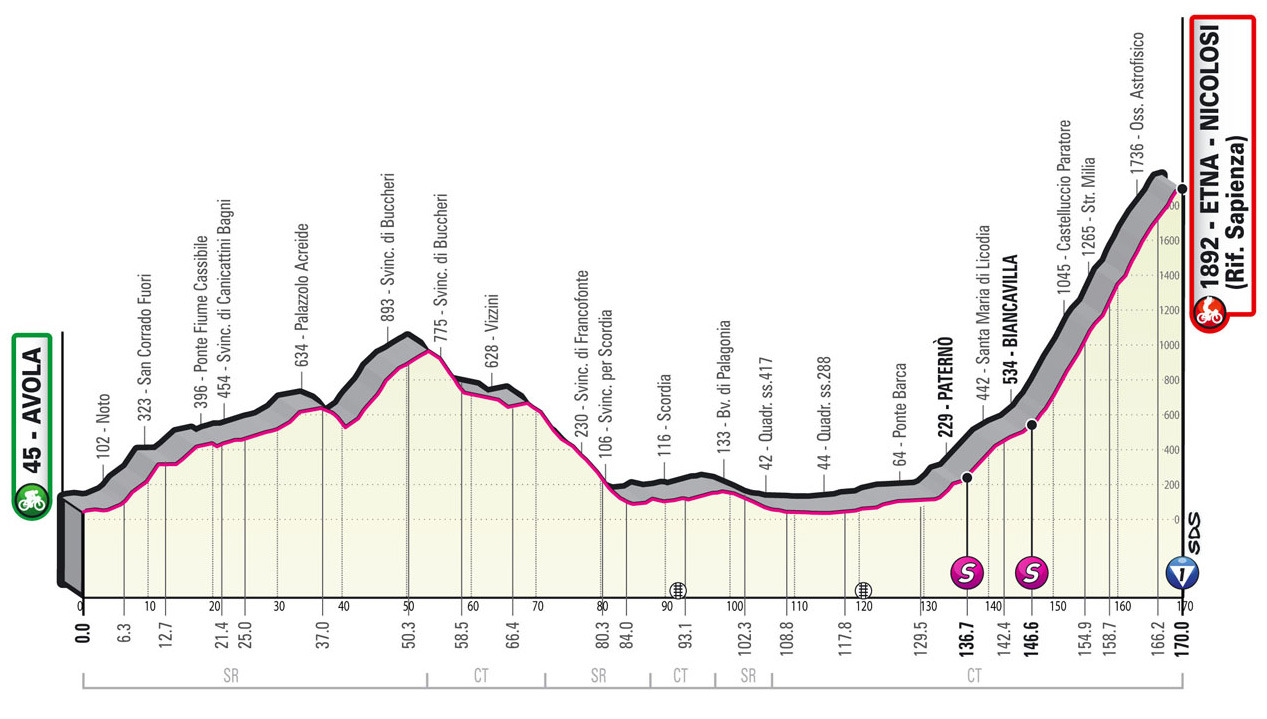 The Giro is back in Italy and it’s straight into the mountains with a summit finish on Mount Etna.

The Route: the early part of the stage isn’t too selective, instead it’s just packed with stunning views and towns, like the baroque city of Noto just after the start. 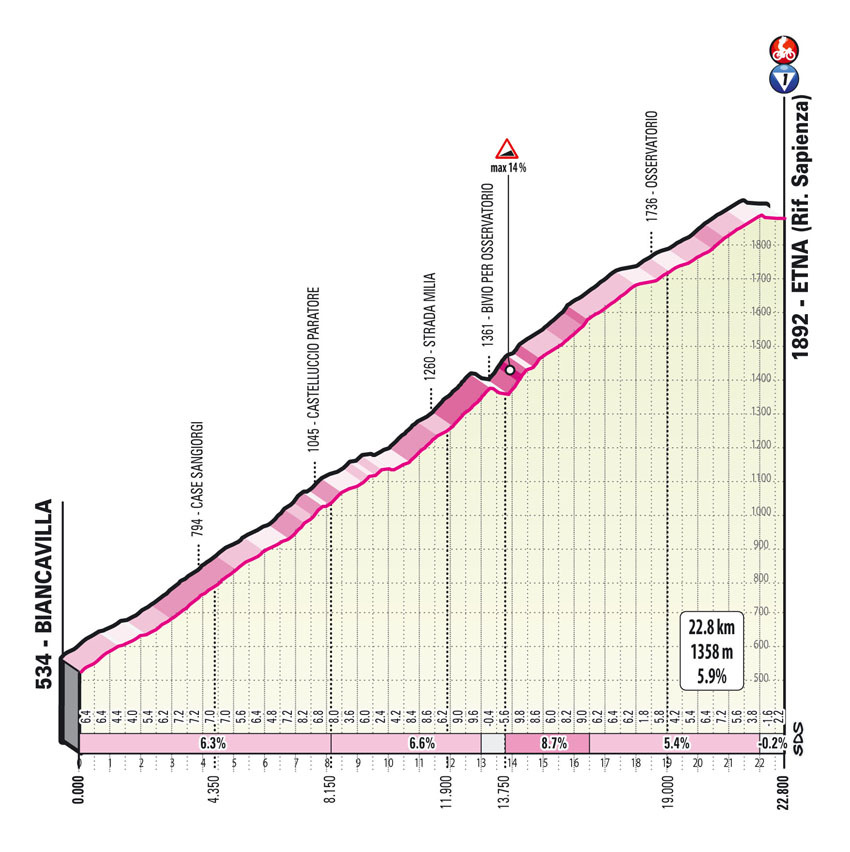 The Finish: it’s all about the big climb of Mount Etna, Italy’s biggest Bialetti stove top. There are several mains roads up, this uses some and also borrows some smaller tertiary roads to snake up. The middle section is the steepest and also where it gets narrow, there’s 2.5km at 8.7%. The final kilometre sees the road dip and then rises to the line with a turn left-hander with 250m to go.

The Contenders: most of the contenders for the maglia rosa have had a good time in Hungary but paradoxically they don’t want the lead just yet, it would oblige their team to ride on the front for the following days (teams just don’t want to break this convention) and they’d have the added fatigue of the daily media rounds. But it’s hard to engineer the scenario where a breakaway stays away and someone else gets the race lead, although Alpecin-Fenix are probably resigned to losing the jersey and won’t defend it tooth and nail today. There are not many riders well down on GC who can win a 20km summit finish yet not be a GC threat so picking a winner from the breakaway’s not easy, especially as we can cross off those names who should be on team duties today. Still riders like Jeferseon Cepeda and Natnael Tesfatsion (Drone Hopper-Androni), Lorenzo Fortunato (Eolo-Kometa), Filippo Zana (Bardiani-CSF) and Alessandro de Marchi (Israel) come to mind.

Simon Yates (BikeExchange-Jayco) is the first in line to take the race lead should the GC contenders come in together and has a tightrope to walk, to follow any danger moves while also being relaxed about giving up a little time to others so they’re sapped by the burden of the race lead. But for him and others like Richard Carapaz (Ineos) sometimes it’s best not to be too fussy and take any time possible. The flat finish at the top of Etna means someone who already needs to take back time like Miguel Angel Lopez (Astana) or Guillaume Martin (Cofidis) has to go early on the steeper part to make gains but easier said than done. Instead riders like Pello Bilbao (Bahrain) or Alejandro Valverde (Movistar) can bide their time for a high altitude sprint. Is Lennard Kämna (Bora-hansgrohe) a GC contender, probably not and he could launch late. Finally local Vincenzo Nibali (Astana) seems in good form and could be one to watch.

Weather: sunny then clouding over and it could rain by the foot of Etna, a cool 16°C.

Etna? It’s the muntagna to locals and sometimes called Mongibello on older maps, a combine of mountain and jebel, the Arabic for mountain. Rifugio Sapienza translates as “Knowledge Refuge”, conjuring up images of a science workstation on the volcano but it’s named after Giovannino Sapienza, a rock climber who died in the war, via Roads to Ride – Mount Etna.

TV: the finish is forecast for 5.15pm CEST. Tune in to catch the whole climb of Etna from 4.00pm.