A sprint stage or not? The Colle di Nava is a tough climb for the sprinters but there’s 100km to get back on. 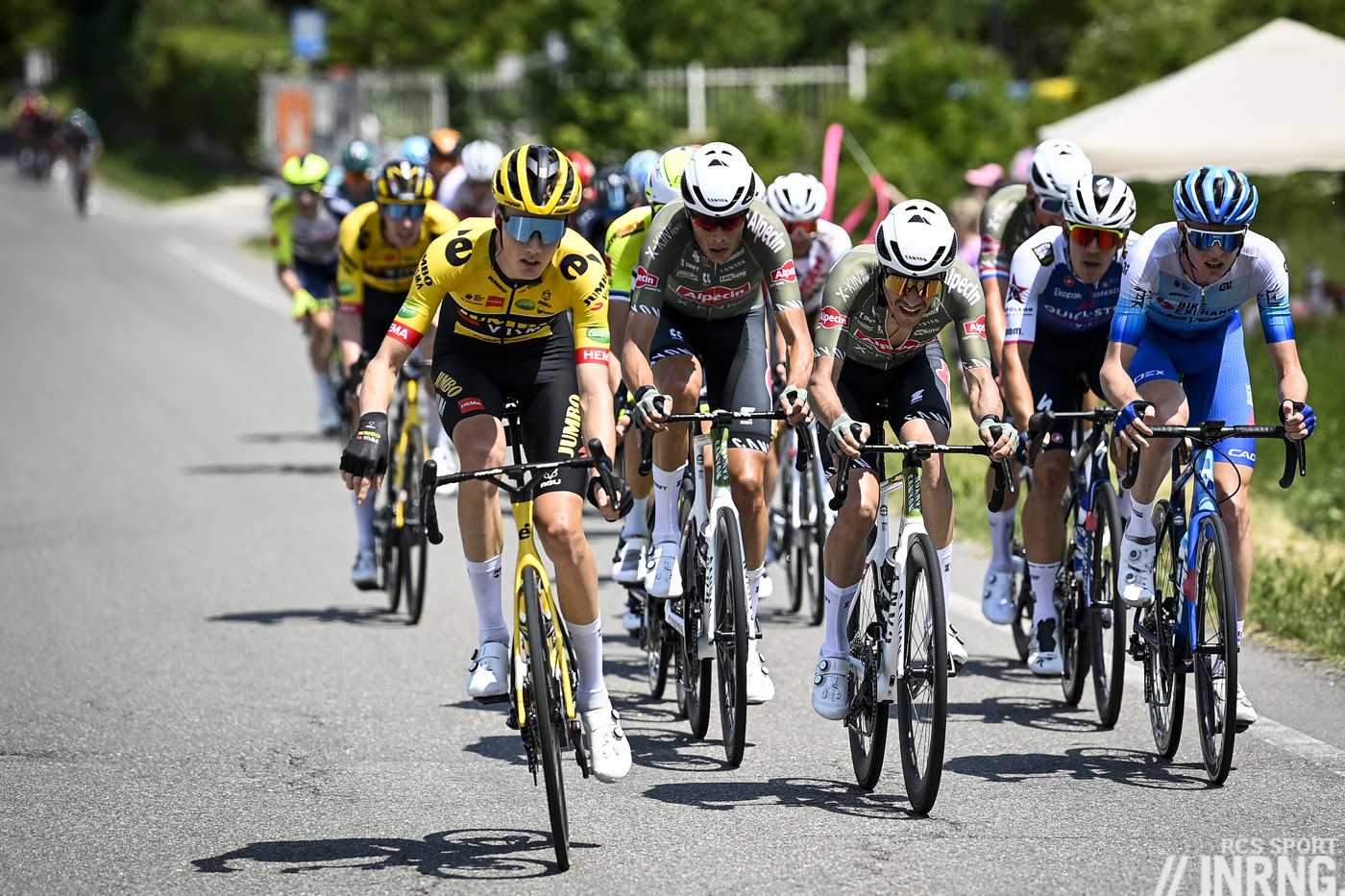 Genova for who? a giant battle to get in the breakaway, they rode 55km in the first hour. Among the 20 riders was Mathieu van der Poel plus two team mates, as well as Wilco Kelderman (Bora-hansgrohe) whose presence obliged Trek-Segafredo to chase. Lorenzo Rota (Intermarché) was the first to attack the group with over 50km to go and went clear with Gijs Leemreize (Jumbo-Visma) and Stefano Oldani (Alpecin-Fenix), all three didn’t have a pro win between them. The next climb blew the chase group to smithereens which helped the lead trio stay clear. Rota was working a lot while Oldani could play the van der Poel card and did less work, but still his share. Did this make the difference in the finish? The trio had a tense sprint and Oldani won by a wheel ahead of Rota. Kelderman took eight minutes back on GC to climb from 23rd to 13th overall at three minutes.

Oldani’s already been dubbed Il Vecchio, “the old one”, by Italian TV on account of his name but he’s only 24. It’s his first win but he’s been racing since his boyhood days, collecting a wardrobe of regional and national champion titles on the road and track. 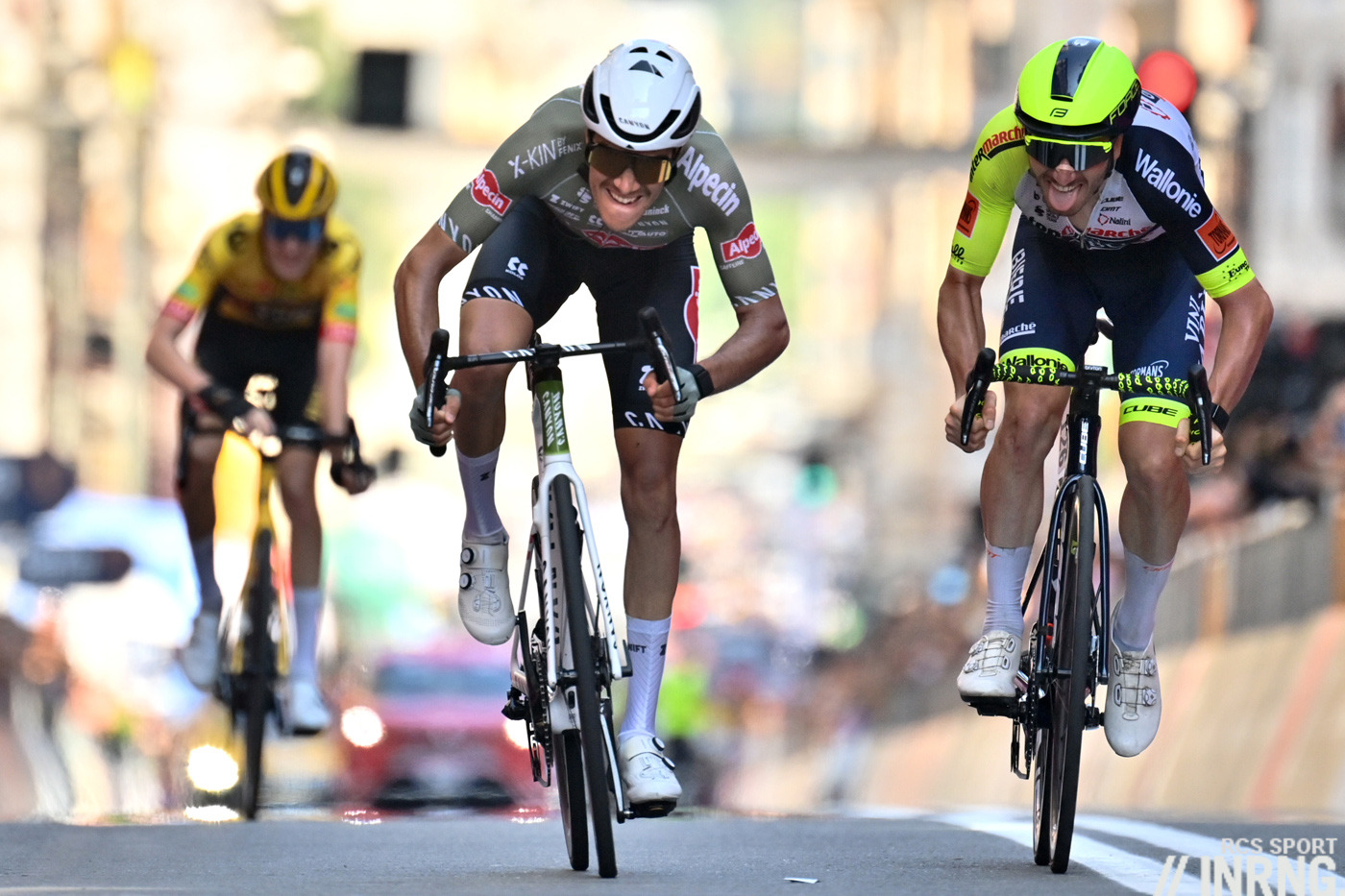 The Route: a sense of déjà vu with a start in Sanremo and traces the route of La Primavera backwards for a while before heading inland – still on the Milano-Sanremo route but the exceptional edition of 2020 – to tackle the Colle di Nava. Then it was a gradual climb with a fast descent, today it’s a proper climb, 10km at 7% but on a big, well-engineered road where being on the wheels helps. Then comes a long section to the finish with few distinguishing features.

The Finish: a long flat road through the middle of town, there’s a cobbled section before the flamme rouge.

The Contenders: breakaway or sprint? Today’s stage is reminiscent of Stage 5 to Messina where the bunch split on the Sella di Mandrazzi and Arnaud Démare made it back to beat a depleted bunch. That day the climb looked flat enough for most sprinters to cope, only the peloton made it hard. Today’s ascent of the Colle di Nava is much tougher, the slope bits more and so if a team or two wants to try the same move they’ll find an opportunity. The problem is going to be sustaining it, there’s 98km from the summit to the finish.

So the default option is a bunch sprint, right? Only how many teams will toil to set this up? Quick-Step probably but they’ve not got big engines and Cavendish is prone to being dropped early. Groupama-FDJ yes but they’ve had two stage wins and Démare’s in the points jersey, they’d like a third stage win but there’s no desperation. Lotto-Soudal have seen Caleb Ewan go home, Intermarché are without Biniam Girmay, Fernando Gaviria must be keen but his team need to save energy for tomorrow and Mathieu van der Poel might fancy going in the breakaway again.