Another Saturday, another circuit race and today’s stage is a tough one with steep climbs and twisting descents. It’s not the hardest stage of the Giro but it could be the most difficult, one handling error or a mechanical can spell ruin for the GC contenders. 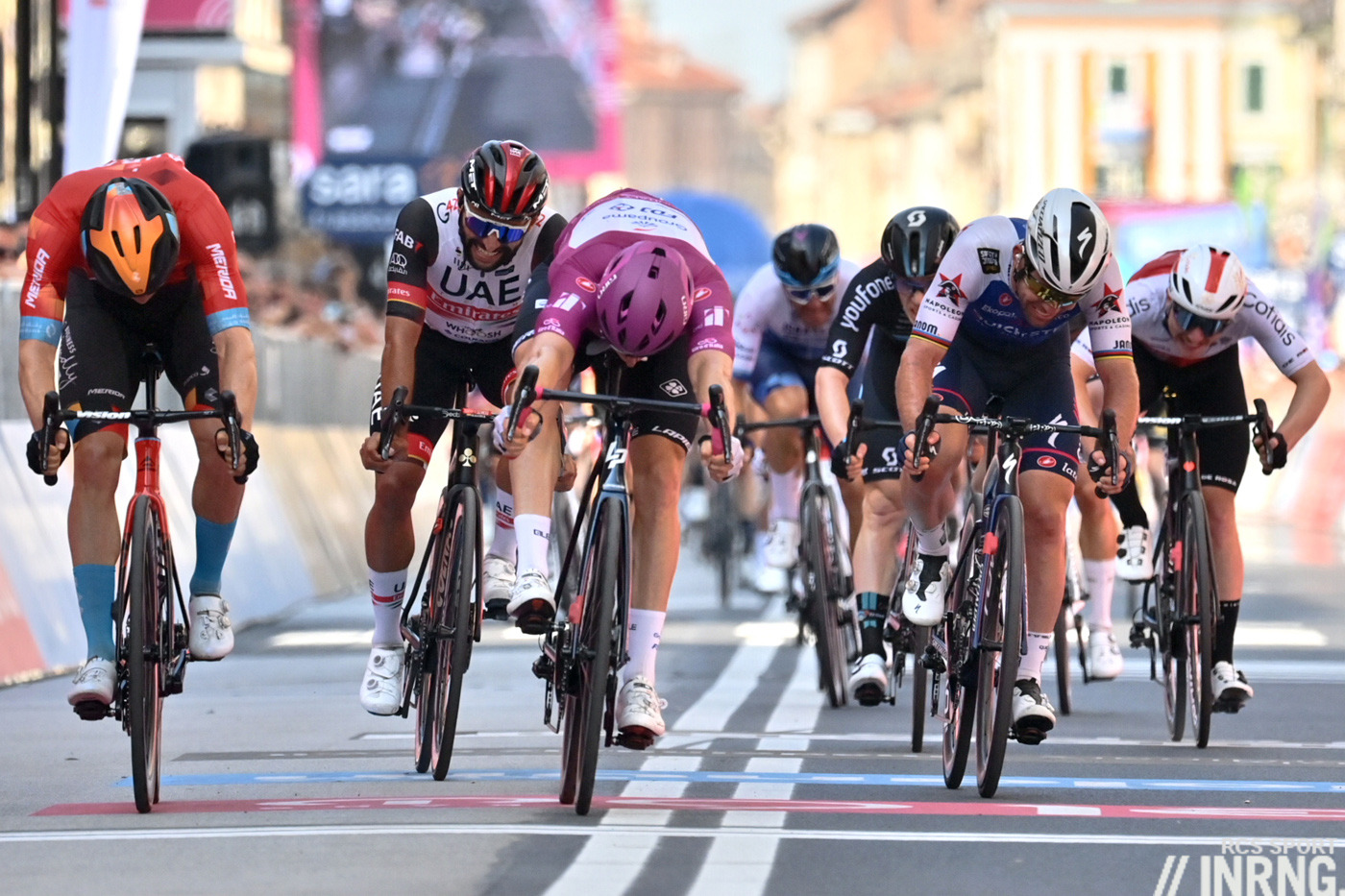 Stage 13 Review: the day began with the question of whether the sprinters could get over the Colle di Nava with the peloton. That was settled in the affirmative but the surprise was that Romain Bardet couldn’t handle the pace. He’d been ill with gastric problem and as to borrow a French phrase, had “cotton legs” and saw the race ride away from him and with it the chance of a podium finish or better in just over a week’s time.

Four riders got away and they stayed away for a long time, the Colle di Nava meant the chaser couldn’t go too hard for fear of dropping their sprinters and so the escapees could build up a buffer which they kept right into the streets of Cuneo. It wasn’t a hectic sprint but Mark Cavendish had to go around rivals, Fernando Gaviria’s lead out man Max Richeze seemed to launch his own sprint and so all Arnaud Démare had to do was launch his trademark long straight sprint. Easier said than done given the work done already but he made it, just holding off a late charge from Phil Bauhaus.

When many riders win, the feeling is often one of relief more than joy, of a job done, a task completed, there’s more satisfaction than delight. With Démare – who wins a lot – it’s different, he’s often beaming with delight at each win. 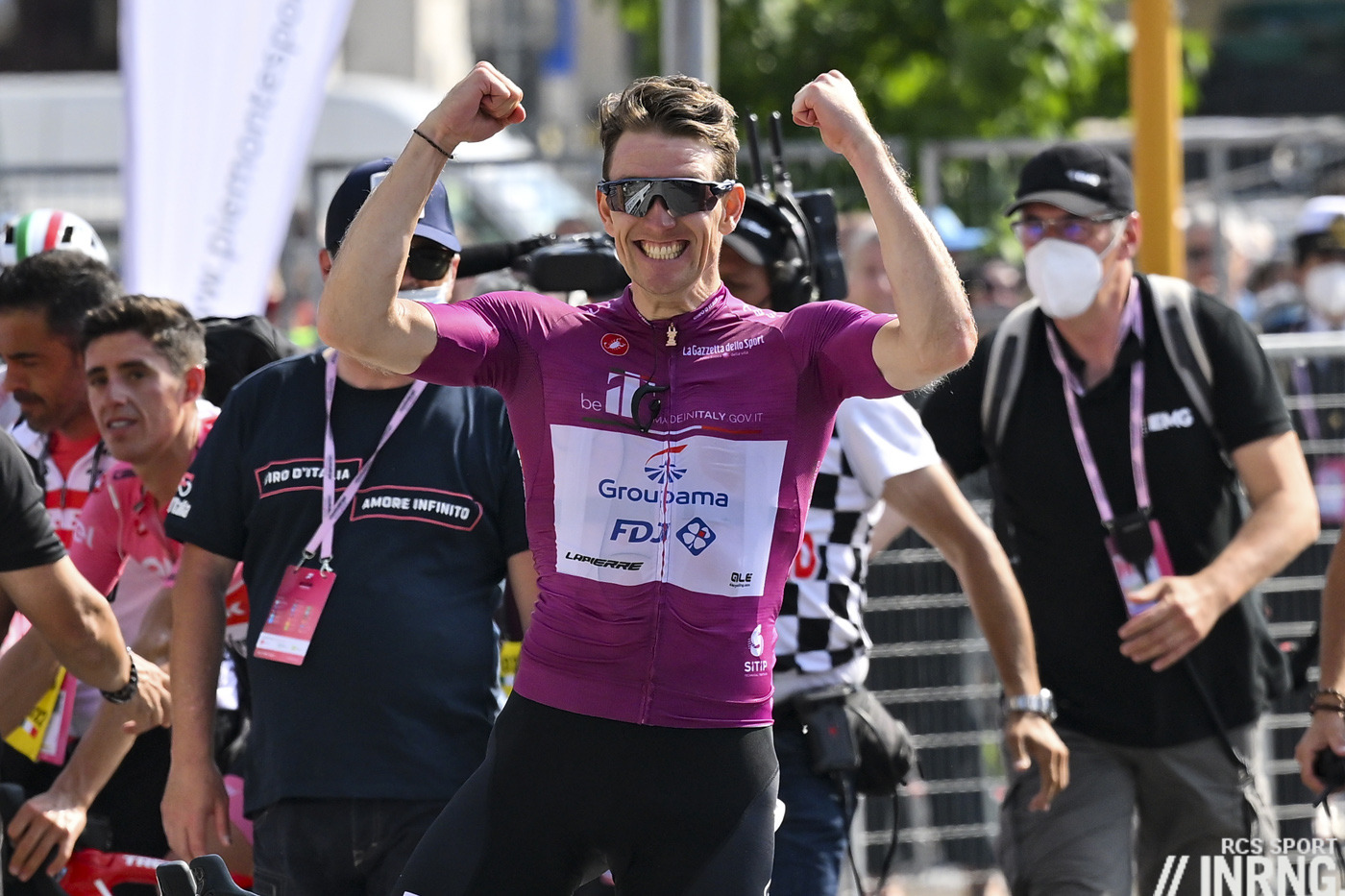 The Route: a short stage, just 147km today. There’s a ride out across the plains for 17km and then the climbs start, a gentle one to start with some hairpins on the way down, a bigger one next and then it’s off to tackle the Bric del Pilonetto (bric is local dialect for a hill or mountain) and then a descent to Chieti.

All this is notionally a warm-up before the circuit, there are two laps of a 36km loop. The profile doesn’t do the circuit justice, it seems to be climbing or descending all the time and often twisting and turning, the only recovery section is the flat run through the city of Turin. 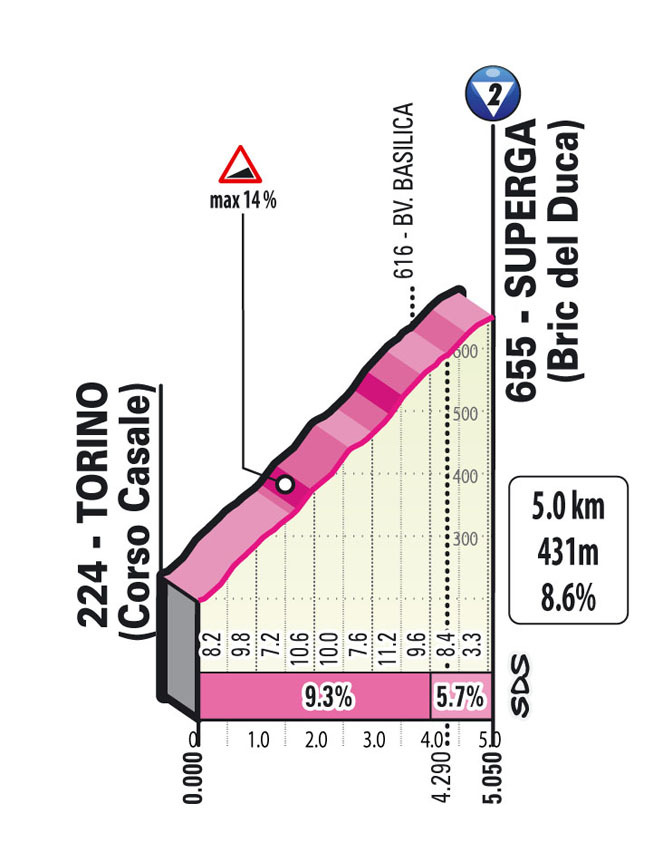 The Superga climb’s been used many times for the finish of the Milano-Torino classic and is a tough climb – but there’s harder to come – and this time it’s not a summit finish to the Basilica, instead the race tips down. From here the road chosen here is wider but still has blind bends before crossing the Col d’Arsete (a dip and not a climb here) and around to the start of the next climb with more twisting descending. Then comes a right turn on to a narrow backroad… 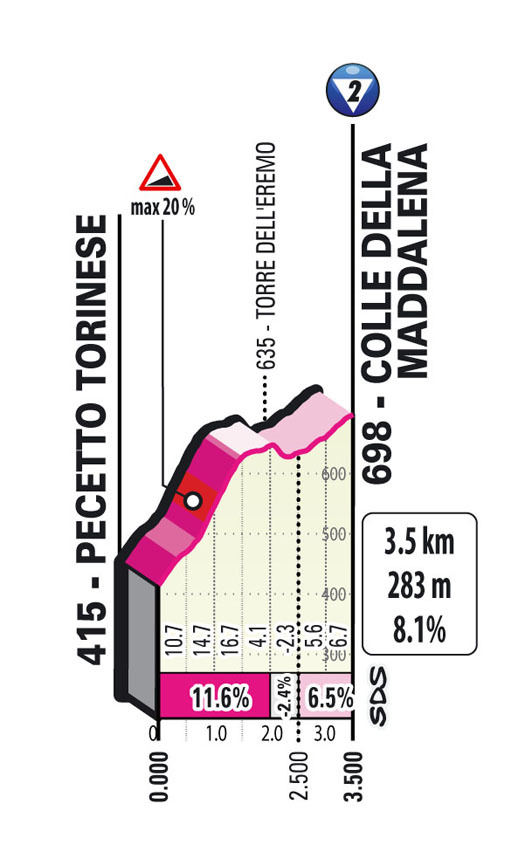 The road is much narrower but there are straight sections at first, then comes the really steep part and that 20% section is no exaggeration taken on the inside line of a hairpin it’s a real ramp between bends. It eases off as the profile shows to the Colle Della Maddalena, more a peak than a pass and the descent is on bigger roads.

There’s a small climb on the way down and then it descends via hairpin bends down to the Po river banks in Turin.

The Finish: downhill through the flamme rouge before it flattens out for the finish.

The Contenders: a breakaway or the GC riders? Simon Yates (BikeExchange-Jayco) might tick both boxes as someone with the form for GC who can go in the break today but the state of his knee and the hot temperatures might be problems and he might find tomorrow’s stage is easier to win, it’s more straightforward.

Wout Poels (Bahrain) fits the bill, he can handle the climbs and isn’t a GC threat. Lennard Kämna (Bora-hansgrohe) isn’t as punchy for the climbs but seems in good form. Bauke Mollema (Trek-Segafredo) is an obvious breakaway pick but he might not have the high octane punch for today, tomorrow suits more.

Among the GC candidates it’s a hard pick as well, they’re likely to come in to Turin together so João Almedia (UAE) might have a good sprint while Pello Bilbao (Bahrain) is ideal too.

TV: the stage starts at 1.15pm and the finish is forecast for 5.15pm CEST. This could be worth watching in full, especially as tomorrow’s stage into the Alps lends itself to a team that wants to control the race, today promises to be wilder.

Via Cavour: the stage starts on the Via Cavour, fitting since it’s in Santena where Camillo Benso, the Count of Cavour, was buried. A statesman of the 19th century he was one of the driving forces behind Italian unification and Wikipedia will tell you more. Today’s note though is that seemingly every town and city has a street called Cavour, a Via Cavour here, a Corso Cavour there and so on. It’s not the most frequent street name, that’ll be the Via Roma. A study published by the University of Roma found that among the 8,100 municipalities (commune) of Italy, 7,870 had a Via Roma, 5,472 had a street named after Garibaldi, 4842 had one for Marconi. Next comes another figure of Italian unification with Giuseppe Mazzini in 3,994 while poet and writer Dante Aligheri in 3,373 towns. Next comes Cavour with 3,334 and today one of them is the centre of the world.