A small anecdote from May 1989 that had some big consequences…

The 1989 Giro d’Italia started on 21 May in Sicily, the race at that time enjoying a later slot on the calendar given today we’re already past halfway through the Giro. Among the starting teams that year was Ariostea, an Italian squad sponsored by a ceramic tile manufacturer with several good riders. But on the eve of the 1989 Giro the team decided it could not do the Giro-Tour double and would give up its start in the Tour de France starting on the 1 July. 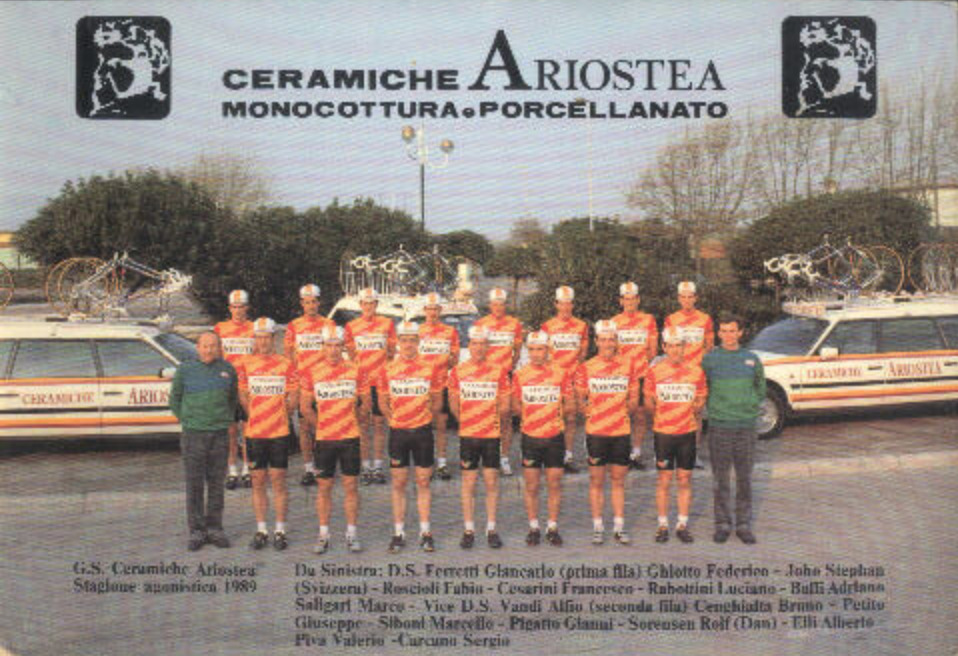 It’s rare for a team to turn down a start in the Tour de France but this was all before the World Tour system we know today and squads were much smaller, typically half the size of today’s teams. Ariostea only had 15 riders – that’s the whole team in the postcard above – and nine of them were lining up for the Giro. As an Italian team the Giro was their home race, their priority.

So the Tour de France organisers were a team down just a few weeks out from the start. Fortunately they decided to invite a replacement squad. But which team to invite? They settled on ADR, a Belgian team that had been launched in 1987. Sponsored by a Belgian vehicle hire company “All Drive Rental” it began with a fanfare and the ambitions of a superteam with almost 40 riders on its books, winning Paris-Roubaix from the start and then the Tour of Flanders in 1988. But if you can’t place ADR in the car rental market alongside Hertz or Europcar, don’t worry. It was a small Belgian firm and by 1989 the team’s budget was running dry, the ADR team was down to a rump of 20 riders – still big for the time – and struggling to pay the remaining slender wage bill.

Greg LeMond had been accidentally shot in a hunting accident in 1987 and his comeback was proving difficult, to the point of him signing with ADR on a meagre contract because that was all he could find. He’d done alright in the Critérium International early that year, he was a past Tour winner and perhaps as an American he swayed the Tour’s new director at a time when the race was being transformed into a more streamlined and marketable business and the US TV channel ABC was covering the race, they even had their own in-race motobike and while US team 7-Eleven was starting, why not add LeMond too? This is just a guess though but it was these outside interests that come to mind because sports wise he and ADR didn’t offer much in the moment. Nobody saw him as a Giro contender in May 1989 and jumping forward to July, nobody saw him as a Tour contender either. In its preview for the 1989 Tour de France, Miroir de Cyclisme magazine says ADR might be able to win a stage but only if they can get riders into the right breakaway as they can’t expect to win a sprint or summit finish and as for LeMond, he and his form are a “mystery”.

Only the rest as they say is history with ADR taking to the start of the 1989 Tour de France and Greg LeMond winning the race three weeks later. It was one of the finest editions ever where the eight second margin between him and Laurent Fignon is memorable but a postscript, the result after the race was over. Throughout July the contest was so good with the yellow jersey swapping back and forth. All that would never have happened if the Ariostea team had not decided to give up their invitation to race the Tour de France just weeks before the race started.