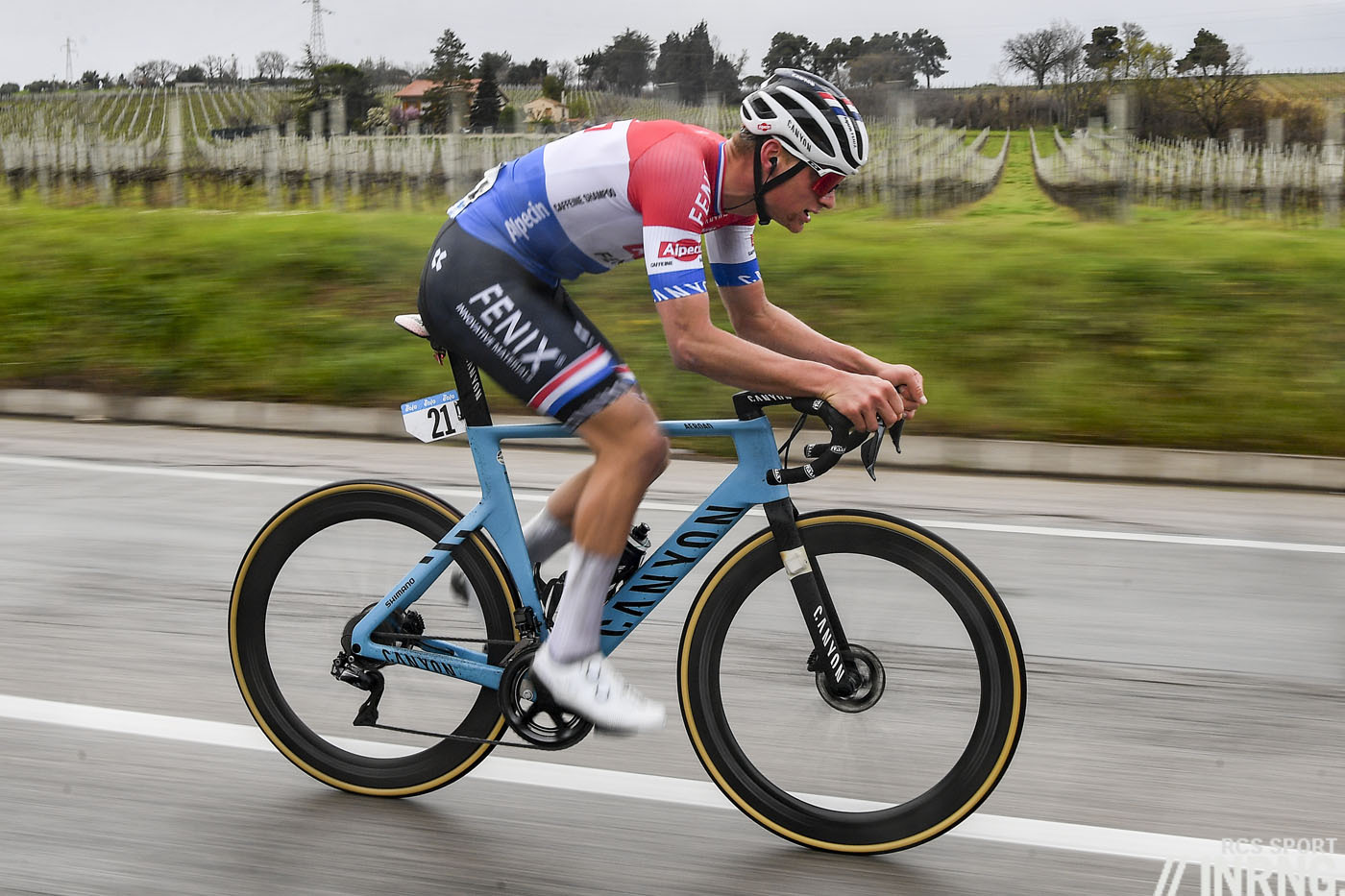 Time to look back at some of the highlights of the year with five picks. It’s a chance to celebrate some great sport and also to apply some precious hindsight.

Here it’s not one race but a day, Sunday 14 March.

Paris-Nice and Tirreno-Adriatico have a lot in common as week-long stage races, they’re prestigious, well-organised, have varied terrain from the plains to ski station summit finishes, cross their host countries and act as pre-classics training blocks. They also share the same spot on the calendar.

Weekend television audiences tend to be larger and more valuable. Paris-Nice finishes on a Sunday and has hit on the box office formula of lively finale in the hills behind Nice. Tirreno-Adriatico has always finished mid-week (this changes in 2022) but typically placed its best stages on the weekend too. 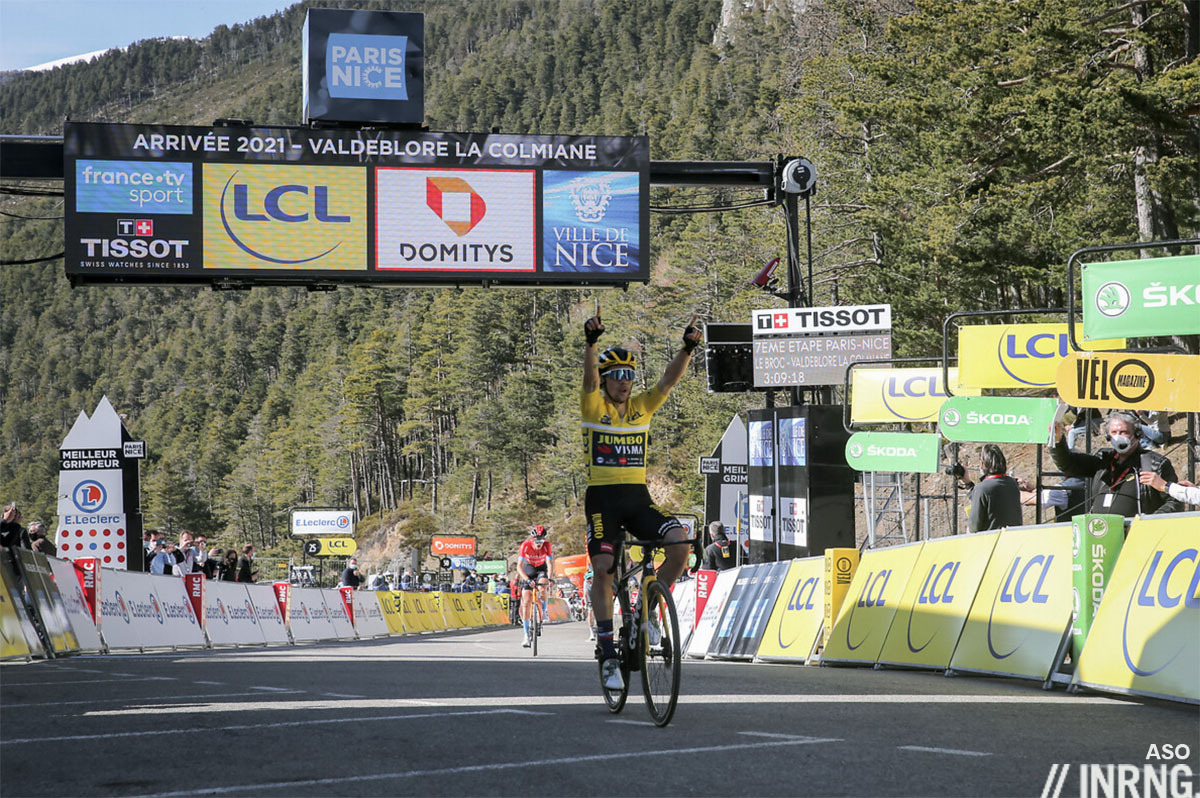 This year, on that weekend, it was summit finish Saturday. We’d seen Primož Roglič win the summit finish at La Colmiane with a predatory move that chased down Gino Mäder to take the stage and the time bonuses. Roglič had already won two stages in the week and was leading overall but this late surge saw him move almost a minute clear on GC with one stage remaining. So the final stage began to look more like a victory parade than a thriller. 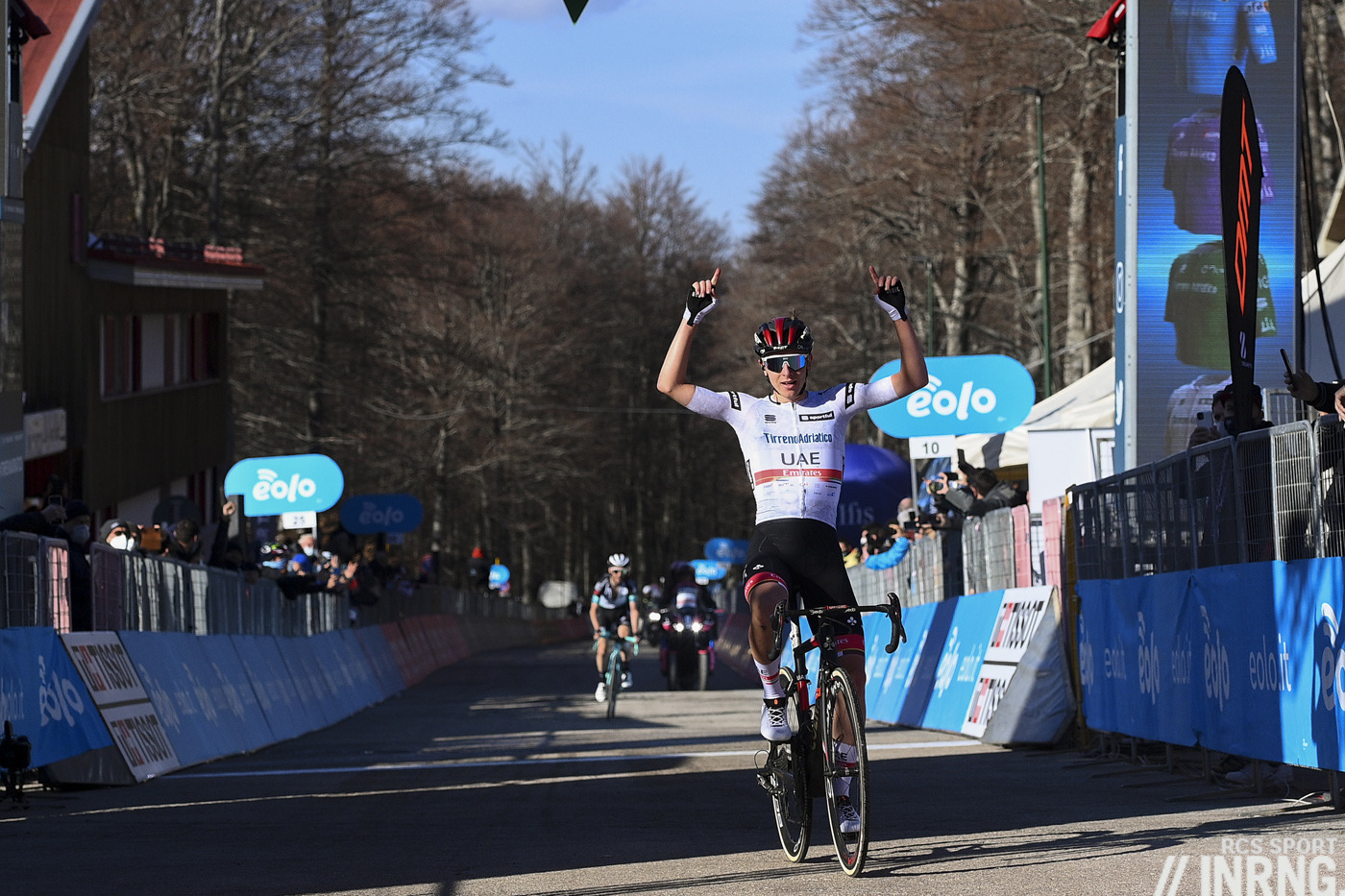 Meanwhile in Italy Tadej Pogačar had taken a solo win on the Saturday at Prati di Tivo, just though, holding off Simon Yates and enough to put him in the overall lead with over 35 seconds on Wout van Aert who was showing the climbing ability we’d later see on Mont Ventoux. It made for a good Saturday’s sport.

Sunday was better. Tirreno-Adriatico’s Stage 6 opted for a dash up the Adriatic coast and then a series of laps around Castelfidardo in the Marche with the “wall” climb, a stage backloaded with 2,700m of vertical gain. It was a cold day by the sea and once on the hillier laps moves started, including Egan Bernal. Just as Mathieu van der Poel looked to be taking in some food… he attacked, seemingly with his mouth full. There were 50km to go and not a quiet minute. First riders tried to chase, then towards the end van der Poel legs turned to cotton wool and he just held off Pogačar for the stage win, with van Aert third at 49s and Egan Bernal fifth over two minutes down. 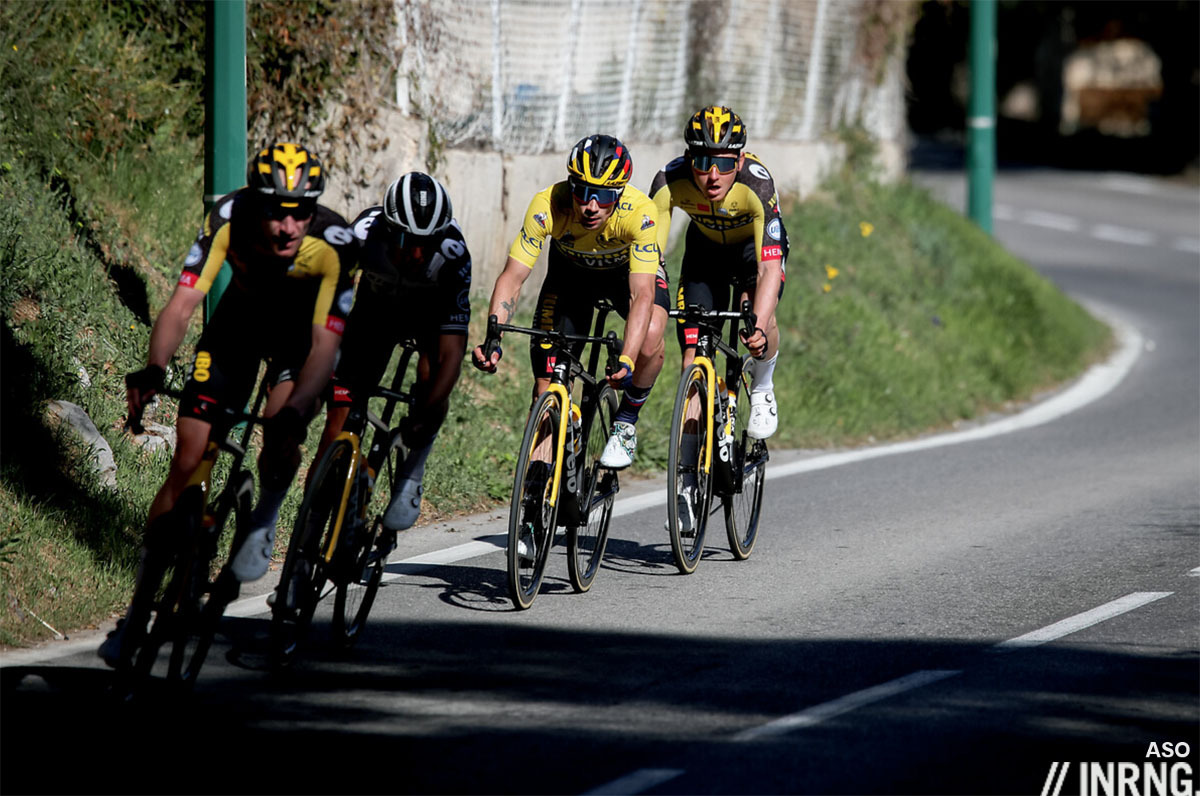 Meanwhile in France there was under an hour to go until Paris-Nice was done. Primož Roglič had survived a crash and apparently popped a dislocated shoulder back in but it still looked we’d get a battle for the stage win. Then Roglič crashed again, almost in the same place. This time just a jammed chain but the race was going faster and his team lacked a big rouleur, Tony Martin had crashed out on an earlier stage. Roglič went through his team mates and then found himself chasing alone up the Vésubie valley, briefly getting help from ejected riders like Nacer Bouhanni, micro moments but guages of his popularity in the bunch. He was within 10 seconds of the peloton but the final metres are always the hardest and Astana and Bora-Hansgrohe were driving the pace. And Roglič couldn’t close the gap. He never gave up though, climbing as fast as he could and prompting many double takes from dropped riders coasting up the last climb. Upon reaching the finish he congratulated Max Schachmann on his win with a fist-bump when by he might have felt like punching harder.

Why the highlight?
Two surprises in a day. You could pick either race but were able to enjoy them both. Van der Poel gave a masterclass in audacity while Roglič showed his tenacity, the long chase was so close but even when all was lost he kept going, overtaking plenty of dropped riders. 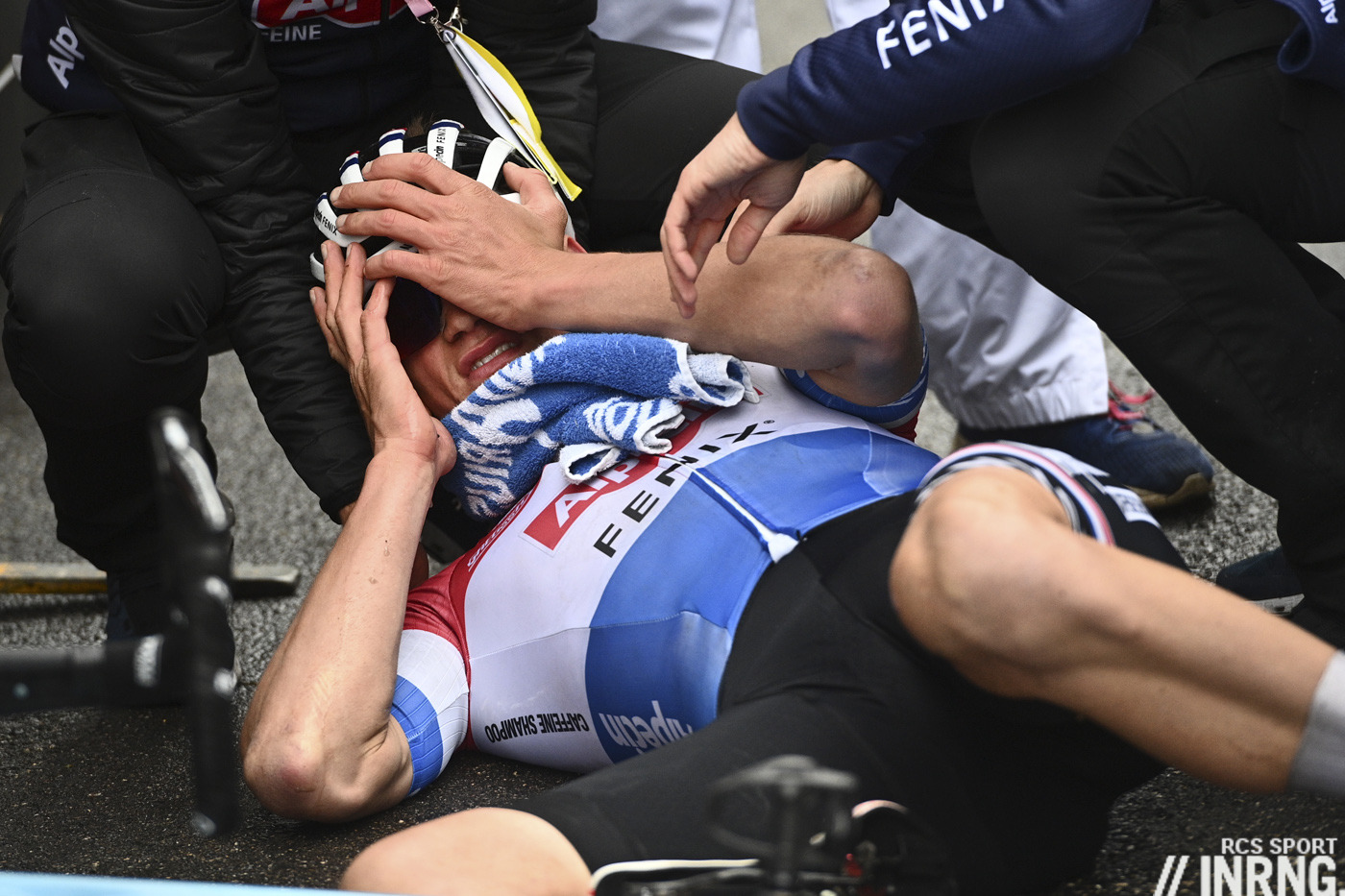 With hindsight
It was thrilling by Mathieu van der Poel but he went too deep and spent the following days and weeks recovering and if he was present in the cobbled classics he wasn’t the menace he could have been. He didn’t win again until the Tour de Suisse.

Pogačar’s riding kept Wout van Aert at bay and so helped wrap up the GC for the Slovenian. He was on the attack the day after he’d won the summit finish, all while van der Poel had taken it easy the previous day. So this was one of those days that Pogačar didn’t win but he showed he was ahead of the others and on the kind of mixed terrain that won him Lombardia, he doesn’t need obvious summit finishes or time trials to win a stage race although he’ll win there too. It’s this that will have riders like Egan Bernal wondering what they have to do (likely answer: take on his team, and try in the very high mountains). 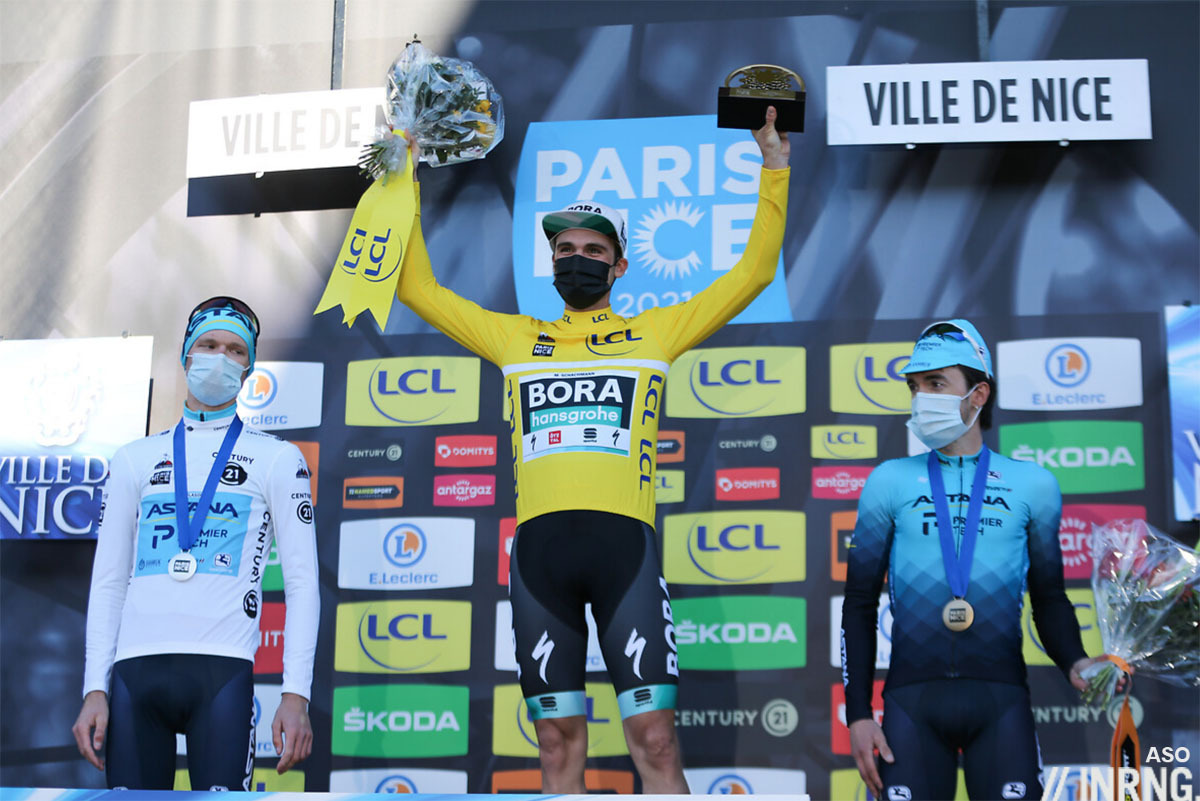 For Max Schachmann, you have to be strong to be sitting second overall and skilful not to crash, but obviously this was a win by accident. Only this was his highlight of the season. He’d won Paris-Nice in 2020 fair and square and looked set for a big season but things never worked out, Bora-Hansgrohe’s transition to a stage racing outfit is a work-in-progress. 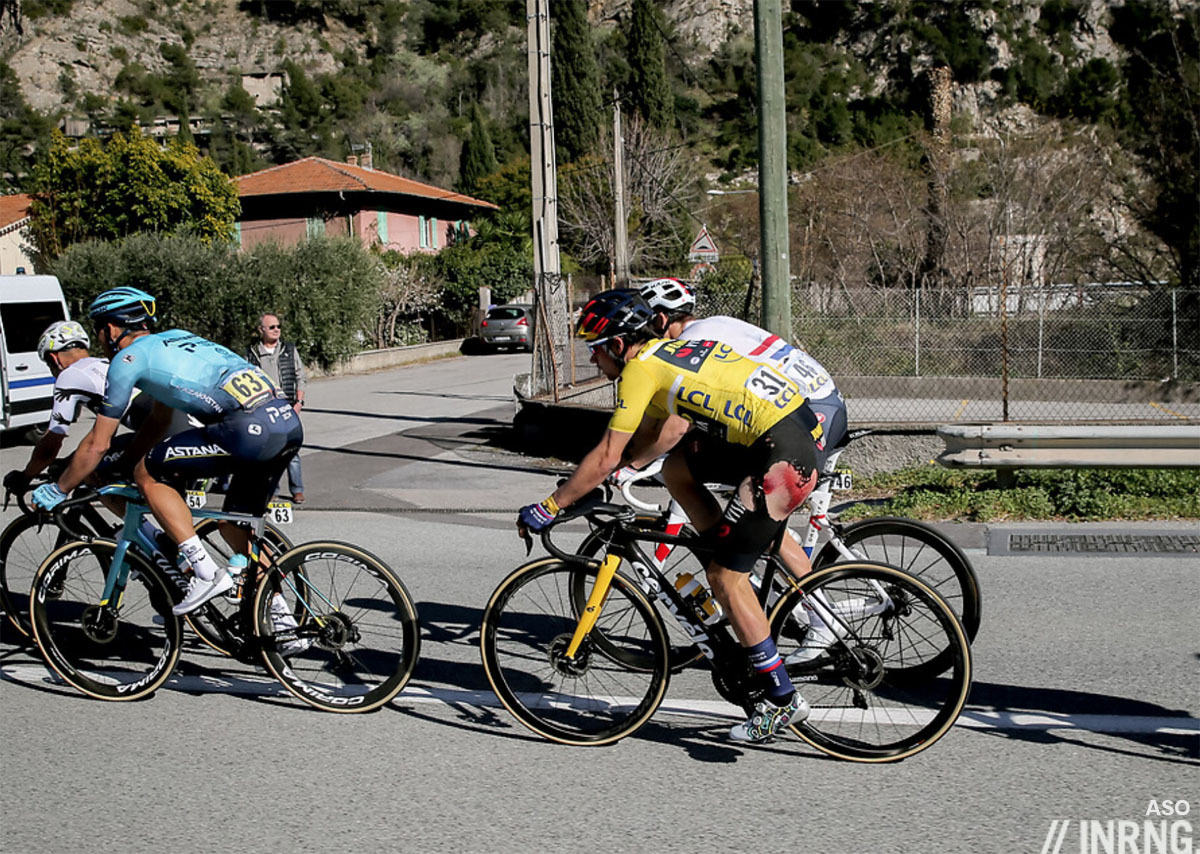 For Primož Roglič this was an emblematic ride, so much stage racing success but so far in France his biggest stage race success is the Tour de l’Ain, a nifty race and arguably the toughest edition ever but he wants a lot more. He won’t stop trying and the sight of him racing up the valley road in his shredded shorts was part of his story, racing even when beaten.

As for clashing races, they only clash if you force yourself to exclude one. While van der Poel was up the road you could channel hop; or switch browser tabs. Hire outside management consultants to reformulate the calendar and they’d hate overlapping World Tour races. But we’d get a sanitised product and fewer riders would be racing. There’s something to be said about not having all of the best riders in the same races all the time, it widens the cast of characters. Keeping Pogačar and Roglič apart can be a good thing, it heightens interest when they do clash.